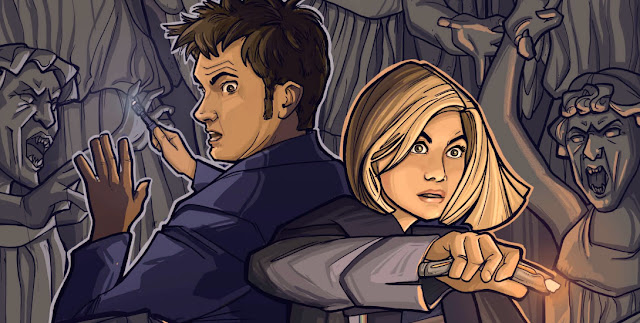 "A Little Help From My Friends" - Part Three 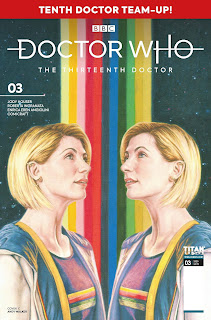 The TARDIS has brought the 13th Doctor, Graham, Yaz, and Ryan to 1969 where the 10th Doctor and Martha Jones are stranded in time without a ship of their own. We left 13 with Martha, investigating the disappearance of her work colleague, while 10 and the 13th Doctor’s companions found themselves under attack from a Weeping Angel. This is where Doctor Who – The 13th Doctor #2.3 picks up. 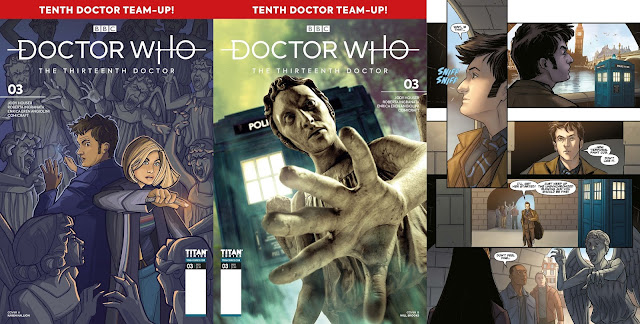 This series is so much fun. In the past Doctor Who comics have often just been superhero stories without the tights, but Jody Houser has managed to transfer all the quirkiness, atmosphere and British eccentricity that the legendary TV show is famous for, straight onto the comics page. This title reads like Doctor Who season 11.1, and is so good that I would love for it to be adapted into a Big Finish audio adventure or – even better – a nice, meaty two parter of the TV show itself.
We’re only three years away from the series’ 60th anniversary… come on BBC, you know you want to!
Once again the art team of Roberta Ingranata, Enrica Angiolini and Shari Chankamma have blown my socks off. The shot with the TARDIS standing at the edge of the Thames, with Big Ben and the Houses of Parliament behind it is iconic (see below). I don’t know if Ms. Ingranata has ever been to London, but she is a terrific artist and has clearly put a lot of work into researching the city, its streets and alleyways.

Enrica Angiolini and Shari Chankamma are no slouches either; look at the light coming through the tunnel, as it shines on Graham and 10; the sky and the Thames, shimmering in sunlight. I know that our river is actually more mud colored, and that blue skies aren’t all that common at this time of year, but these color artists are making dreams come true, and illuminating fantastical adventures. This is life x10… bigger, brighter, bolder and brilliant.
By contrast, on the following page you can almost see the dust floating in the light filtering into the shop, and 13’s so spot on, naturalistic way of pulling her sonic screwdriver out of her jacket pocket is real, and beautifully captured.

I still think that there’s still a little too much empty space on a few pages, but what does fill the panels is gorgeous.

Nope, no criticisms. Ever letter is lovingly rendered, the art is gorgeous and the script is a delight.
I don’t know if Richard Starkings or Sarah Hendrick are old-school Doctor Who fans, but lettering the “What?” when spoken by both Doctors onto the page must have raised a chuckle if they are. My favorite line from the issue comes when 10 sees 13’s TARDIS, spots that it’s different to his and he says “I don’t like it.”

I AM an old-school Doctor Who fan, and this line was first uttered by Patrick Troughton’s second Doctor, way back in 1972/73’s “The Three Doctors” about the third Doctor’s TARDIS. He said it again in “The Five Doctors” (1983) and many times since. Both David Tennant’s 10th Doctor and Matt Smith’s 11th have uttered those famous words too.
I’m jealous of Richard and Sarah, as they got to read this wonderful Jody Houser dialogue and place it in the mouths of these legendary characters. Lucky devils…

I. LOVE. This. TITLE. Thrills, chills, laughter… magic. Now that we have two iconic Who villains bringing the scares, as well as two brilliant incarnations of the Doctor, I know that the fun has only just begun.
I feel like Oliver Twist when I say, “Please Titan Comics… can I have some more?”