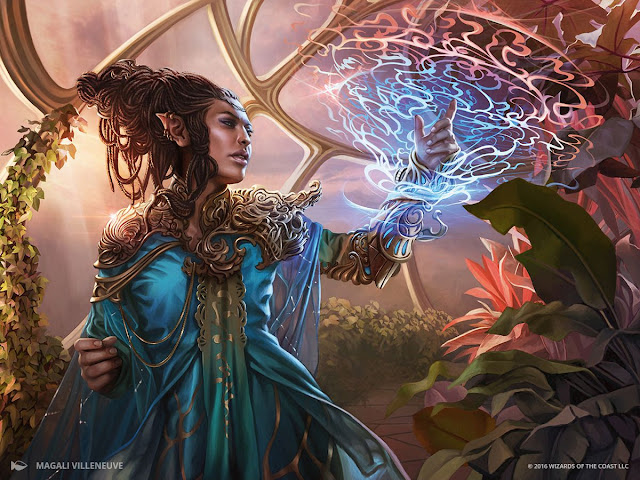 My choice of art to talk about the Commander 2020 spoilers may seem strange, but I can promise that Rashmi, Eternities Crafter is getting a welcome reprint in the Commander preconstructed decks. A Blue/Green cascade powerhouse is always welcome in this format. Brawl staple Arcane Signet is also getting a printing in these decks, making availability all the better! Many flavourful Planeswalkers are getting another go around in this product, and I'll show them off at the end. I'm here to talk about the powerful partners, the return of Experience Counters, and a cycle of free spells. Let's take command. 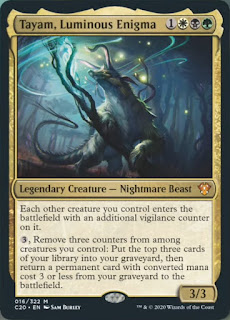 An alternate Abzan commander in the deck with the keyword counter insect. This makes for an interesting Abzan counter commander in the pantheon of Ghave and Daghatar. Instead of placing counters to swell your board, you take away counters for self mill and recursion. This synergises well with spoop bug by filling your grave and ensures there's enough keywords to share out, that this beast can take away to fill up the board. We all know how powerful Sun Titan can be. 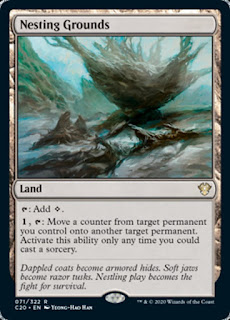 The effect of the Giant Fan or that version of Everythingamajig seems fair, but this is the closest we're going to get for a while. It's a powerful design when one considers that keywords have counters, so giving a creature flying or hexproof on a dime is quite powerful. Or it would be, if it didn't have the sorcery restriction. We were on the verge of greatness with this card. We were so close. 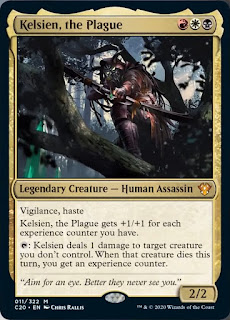 What a curious design. An excellent callback to the Commander 2015 decks, which featured the likes of Mizzix and Meren. I'm unsure it's on the same power level as those commanders, but I have to say that the design is fascinating. Cards like this, Mathas, and Queen Marchesa really help keep the format aggressive but interesting for this colour wedge. Kelsien has the benefit of being a haste pinger, and a large, vigilant beater. The rest of the deck (as I would build it) would be control cards; wraths and removal, including the amazing Crackling Doom. At the same time, there'd be plenty of effects to give this dude Deathtouch to make sure he racks up the Experience - cards like Gorgon's Head and Basilisk Collar come to my mind. 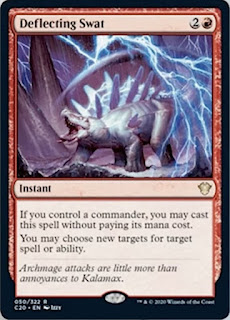 Now for the first part in a cycle of cards that are free if you control a commander. It says 'a', and not 'your' because they're rewarding you for playing Partners, you'll see more in a moment. This one is very interesting. A free Redirect is quite powerful, and though it may be narrow, times like this may really save your creatures from a targeted kill spell, or stop a combo if they want to target their own cards with a spell. 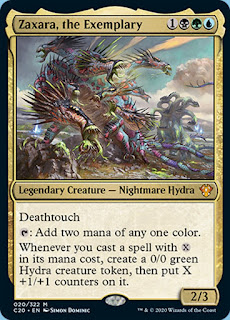 I love this design on the alternate Sultai Commander. 4 mana for a 2/3 Deathtouch is very medium, but that's not what the format is for. This card has two roles for me. Obviously this is the new Hydra Tribal commander, pipping out previous tribal leaders like Gargos, Vicious Watcher or ramp commander Rosheen, Meanderer. To me, this pulls double duty - caring about X spells of any kind. You make Hydra tokens when you cast draw spells like Pull from Tomorrow or tutor many cards with Diabolic Revelation. It's also important to notice that this friend doesn't make X/X Hydra tokens; it makes 0/0 tokens with counters, which would love to be proliferated. This makes sense now for Villainous Wealth to get its reprint. This deck is very set, at least in my head, for some Unbound Flourishing. 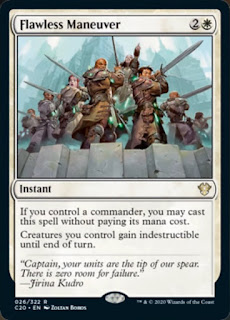 The white card in the "free-if-you-have-a-commander" cycle. Sudden indestructible with no mana is very powerful in a format defined by board-wipes. I can see almost every white deck under the sun playing this much in the same way they all want Teferi's Protection. 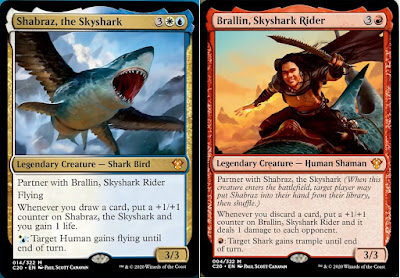 It's quite a special bond, isn't it? Between a man and his... shark. As I said earlier, Partner is back in this set. Particularly the Partner With version from Battlebond. Both Brallin and Shabraz can be your commanders in Jeskai Sharks, or they can be together in a Blue/Red/White deck, and when you play one, you can search up the other (even though it isn't worded that way, it's still a search, so you can't find them when Stranglehold or Ashiok is in play). As a pair, I think they make for a fun deck, with both getting very strong with looting, or rummaging triggers common in Blue and Red. Add some white protective spells, and the many sharks in Ikoria (and possible others they may errata) and you have the most fun deck in the sky. 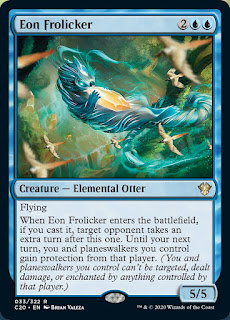 Magic's second otter looks like he's here to stay. Sorry Lutri, you're just too powerful for Commander. As for this friend, I can see quite a few tricks here. You could build up an immense Superfriends board, and keep them safe using Venser to give others many turns - particularly if you have Teferi's emblem. This sounds like Christmas land, I agree. If it were me, I wouldn't be caught dead with this little friend, unless he were frolicking in Ugin's Nexus. 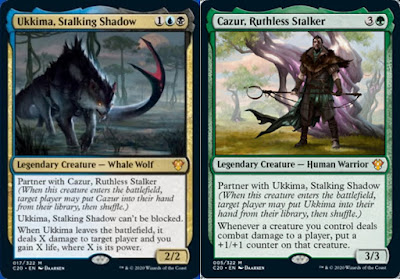 What another striking partnership. I hope the Abzan, Mardu, and Temur partners are also a Human and their pet. Anyway, this leads to a very interesting play pattern in Sultai. We see the hunter make his Whale Wolf stronger, then you flicker it to drain an opponent. I can see the two of them slotting into Atraxa, or their own Sultai control shell like Damia.

Plenty of powerful cards on display from the new Commander product. Flavourful reprints abound, and one's set to make these historically strong decks even stronger. Tune in to Fantastic Universes for more Commander 2020 and Ikoria spoilers, and before we go, just a little gallery of the reprinted Planeswalkers in the set. Nothing crazy, but fun ones nevertheless.