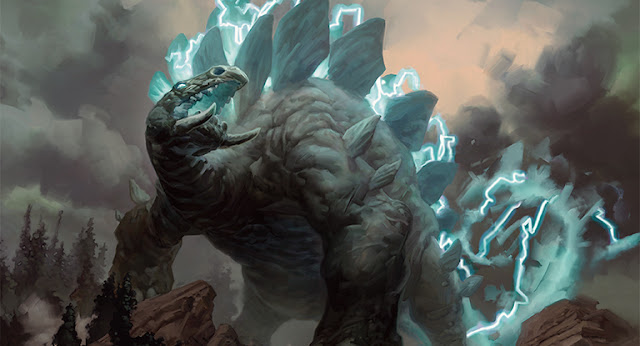 I look away for a second and a flood of Commander 2020 spoilers flood my forums. This day's offerings are no less strong than the last, with an immensely powerful mana rock, the Temur and Mardu partners, and a cycle of goad auras. There's many exciting strategies to be found in the Command Zone. 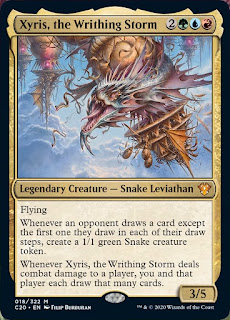 Possibly taking Kalamax out of the Command Zone is this interesting Snake Leviathan. Caring about when an opponent draws a card is very interesting design, but not seen in this colour combination, and is usually saved for Black in cards like Ob Nixilis or Underworld Dreams. Much less overt than two Nekusar staples, the effect is much more subtle. I like that a lot. In command of his own deck, this takes the wheels archetype to a new space thanks to adding Green. Green gives a wheel's deck all the recursion of cards you may need but have discarded. Cards like Eternal Witness, Reap the Past, and Wildest Dreams ensure that you're getting all your relevant spells back and flooding the board with snake tokens. 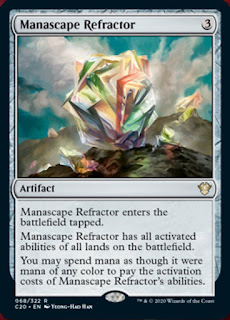 For 3 mana, and entering tapped, I still rate this as an incredibly powerful rock. It works as both a Reflecting Pool and an Exotic Orchard. It's also more than that. All abilities and fixes the colours so that any deck can activate the abilities. This rock can make 1/1's with lifelink if it copies Adanto, the First Fort or dig through your deck as Castle Vantress. It could send away attackers as Maze of Ith or bring your creatures back as Homeward Path. Or you could sacrifice it if someone has a Strip Mine yet this can't be Strip Mine-d. The versatility of a card like this will make sure it stays relevant in the format for as long as they print new and interesting lands. 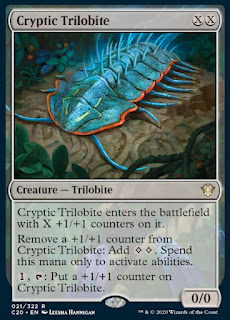 Magic's 4th trilobite is the most powerful and the most interesting. The flexible casting cost ensures it goes into most decks and acts as a body as beefy as that of a Walking Ballista or Hangarback Walker. This isn't remotely comparable in power, but the ramp potential for this card is immense. I can see it being very powerful alongside the new Sultai Nightmare Hydra or Atraxa. Lots of mana for activated abilities will go very nicely in deck like Atraxa, as I can see this primordial bug fuelling Contagion Engine very well. 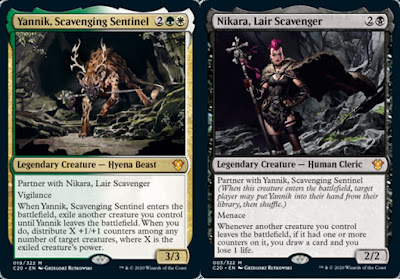 The Abzan partners definitely have the best and most punk aesthetic of any commanders in the set - which isn't hard as most of this set's commanders are primordial monstrosities. I also appreciate that Yannik the hyena is bringing Nikara her staff. As for playability, I really like the idea of an Abzan counter/flicker deck. The hyena exiles a creature O-Ring style but gives the benefit of growing himself or your team. If he were to leave, then you get to draw with Nikara's trigger, ready to redeploy with another target to exile. I'd appreciate if there was an onboard way to flicker Yannik or if Nikara drew a card when she leaves play. I suppose those may have been there but removed during development. I think as long as you can enable many counters and mitigating the downside of your counter-ed creatures leaving play, then these two can be very powerful removal and card draw machines. 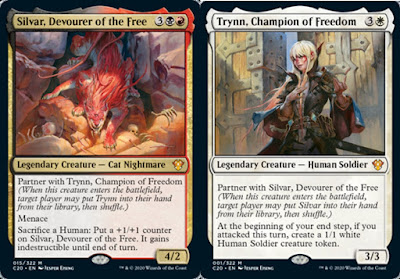 The Mardu partners have the seal of approval from a dear friend who appreciates sacrificing things for power. The stunning pair featuring artwork from my personal favourite, Jesper Esjing. As function goes, this is truly an aristocrats engine if ever I saw one. The small downside to the free sac outlet on Silvar is that it has to be Humans, but being placed in the Mardu Humans deck, the other partner makes humans, and the other commander being a human means I think the density of humans is well managed. Feeding your human army to Silvar to buff him up and make him an indestructible menace makes for many Zulaport Cutthroat triggers and a large beater. Very aggressive in the early game with the combat and late with aristocrat drains. Exactly what we'd expect from Mardu.

Now for something completely different. The Impetus Cycle is a fairly simple design - auras you put on your opponent's creatures to make them attack another opponent and give you a kind of benefit. The Blue and Red ones are probably the strongest, giving you card selection and ramp. This cycle reminds me of the Curse cycle from Commander 2017 - a lot of fun but the first removed cards when upgrading the preconstructed decks. 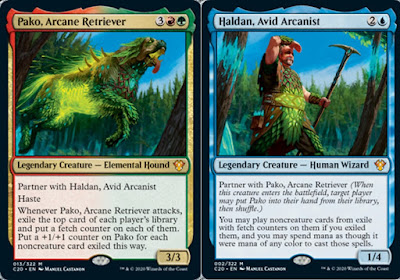 The highest stakes game of fetch in the history of Commander. I love the design on these two, and when you pair them with Kalamax and Xyris, this clinches it for me. As for this duo as a pair, it's somewhat annoying that it takes two cards to move an effect out of what Black has been doing since Gonti became the most luxurious. Nevertheless, being able to hypothetically draw 4 cards from the pupper's attack trigger, and play them while the Wizard is out is very strong card advantage. It's hard enough for a deck to fight another deck - it's something else entirely when a deck has to fight itself. Bonus points go to the person who plays effects that let you look at other player's decks. Bonus points if you're able to use the repeatable ones like Moonring Isle or Wand of Denial. I think I have a spare Jace somewhere.

The commander decks appear flavourful and powerful. There have been callbacks to old releases and the boxes ooze flavour of Ikoria. I'm as excited for these precons as I have been for some of the ones that went on to become the strongest. As more new cards shine through, expect Fantastic Universes to discuss what they're up to as we eagerly await their release.
Adam B Ray Adam B. ray Adam Ray Commander Commander 2020 Ikoria Ikoria Lair of Behemoths Magic Magic: The Gathering MTGC20