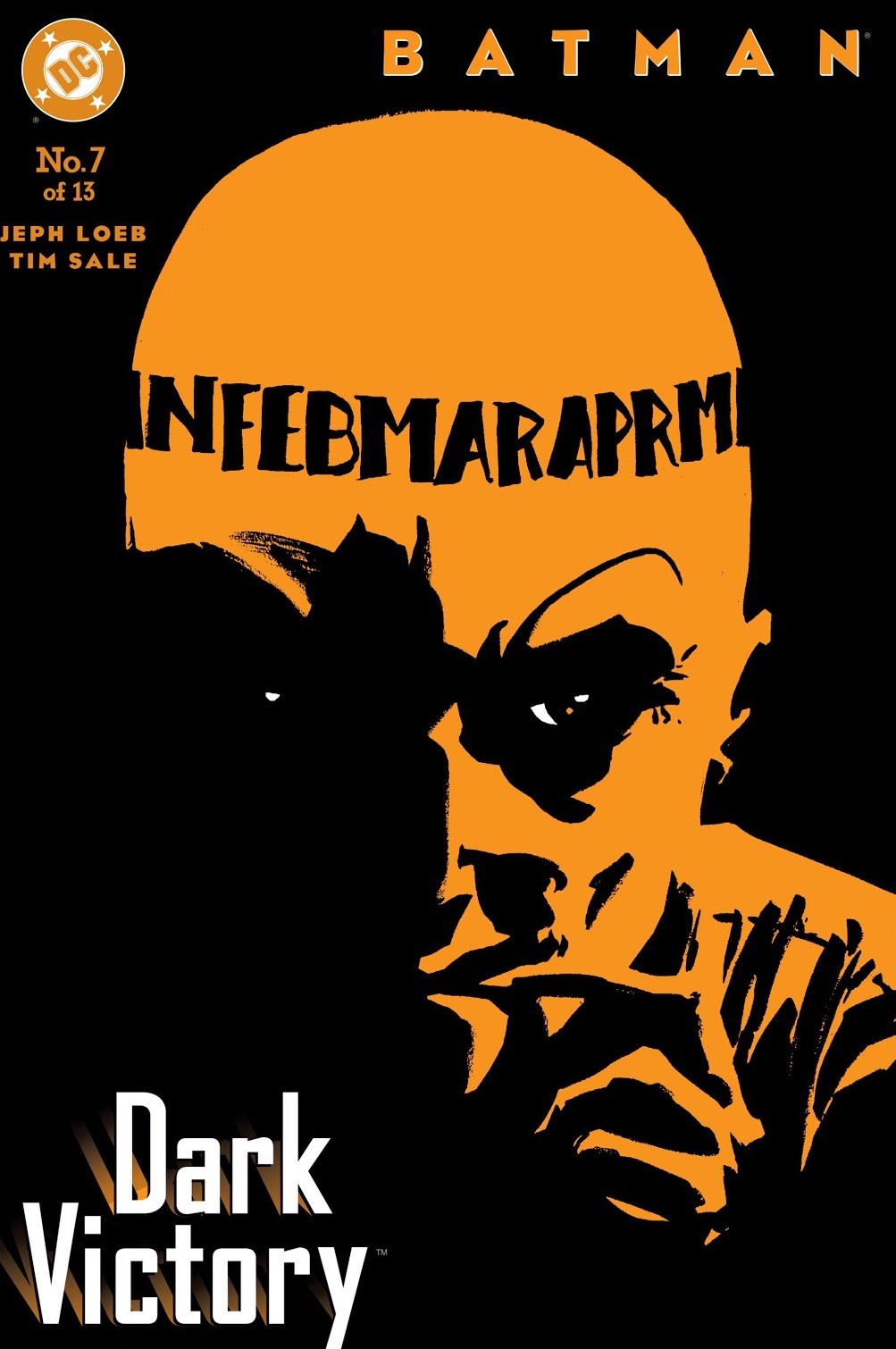 Picking up from the previous issue, where the police surrounded Batman, who was inspecting the hanged body of Stan Merkel. Readers can tell immediately that our hero is fraying at the edges here, based on his narration. As a way to catch new readers up, writer Jeph Loeb always has Batman recap the previous events in his narration boxes. It is a trope for Loeb to have the main character narrate at the beginning of every issue.
Here, Loeb actually cleverly subverts his own conventions and readers’ expectations by making Batman an unreliable narrator. When Batman recaps the Hangman killings, he needs to correct himself. “No one… none of you are safe.” This is brilliant, because readers get discombobulated. It also effectively conveys where Batman’s head-space is through minimal dialogue.

Batman escapes the police, but before that, Lopez unloads her entire clip at him. Just how many bullets did she shoot off? I counted at least 21 rounds (conservative estimate). That is way more than a standard police issue Glock 22. This seems to be the case where artist Tim Sale is taking artistic license. He is stretching reality with his art. He shows Lopez firing off way more bullets than in reality to heighten the tension and drama of the scene. It is the similar reason why he sometimes draws Batman’s cape unrealistically huge or the Joker’s teeth inhumanly big.

The story then jumps ahead two weeks, where DA Janice Porter is in bed, while Two-Face gets dressed. Batman’s narration notes how Two-Face is now a distinctively different personality. He is willing to do things that Harvey Dent never would, like sleep with other women.
There is an odd scene where Two-Face holds a kangaroo court to charge Julian Day, the Calendar Man of obstructing justice. It’s a faux trial for a lot of reasons. Two-Face acts as the prosecutor, while constantly threatening to shoot Calendar Man. The premise of the trial also shifts around. Is Two-Face blaming Day of withholding information of the Holiday killings? Or is he trying to interrogate him about the Hangman? Why would Calendar Man have more information about Hangman than Two-Face?

Speaking of which, Calendar Man admits that he knew who Holiday was the whole time. That is a mind-blowing revelation. Looking back at The Long Halloween, there is no way Calendar Man should have known. Additionally, when Day tries to tell Two-Face who Holiday is, Two-Face cuts him off. This can be interpreted as the Calendar Man really didn’t know and Two-Face doesn’t really believe him. Day said it right there: “The Calendar Man was being forgotten. That is unacceptable.” Calendar Man craves attention of any kind, even by lying. Holiday, and now the Hangman, are far more notorious than he ever was, and that is eating at him.

The whole scene is weird, but not bad. It does give insight into Two-Face and Calendar Man’s motivations. It also clarifies how the Hangman killings are starting to really interfere with Two-Face’s plans. Realistically, though, why stage it as a fake trial? Why would the other rogues willingly act as a jury? They must really like Two-Face to entertain him like this.

Admittedly, Loeb knows this is scene is weird, hence the issue’s title: “Fools”. In this issue, almost everybody is acting like a fool or being fooled. This fake trial is foolish. The police are fooled by the Hangman. Sofia Gigante is fooled into thinking that Alberto is conspiring against her. And most importantly, Batman is acting foolish for isolating himself, which is negatively affecting his job.


When Alfred calls Batman out on his careless detective work, Batman actually loses his cool. Alfred points out how Batman used to surround himself more with allies to help him: Commissioner Gordon, Harvey Dent, and even Catwoman. Since cutting himself off from almost everybody, Batman’s focus is more scattered and his limits are tested.
To drive the point even further home, Batman realizes that part of his paranoia may be due to being under the influence of Scarecrow’s fear gas. After talking it out with Alfred, the butler says, ” The only problem with being alone, Master Bruce — is being alone.”

Just as Gordon gets off the phone with his wife, he is attacked and hanged on the Bat-Signal. Fortunately, Two-Face cuts the line, before Gordon gets strangled. Batman sees Two-Face with a hangman’s noose, however, and automatically assumes he is the Hangman. Just like in TLH, there is no murder on April Fool’s Day.

Perhaps the most interesting part of the exchange is how disconnected Two-Face now is from Harvey Dent. When he pleads innocent to Batman, he speaks in third person.
“Someone wants you to believe that Harvey Dent is the Hangman. He isn’t.”
Two-Face believes Harvey to be gone. He treats Harvey like a separate completely person. But despite his insistence that Harvey is dead, Two-Face still addresses Gordon like Harvey.
“Harvey is never coming back, Jimbo. Get used to it. Particularly to help a pair of old fools.”

Two-Face’s statements send a confusing and complicated message of hope. He has always claimed that there is no hope in him. The good man Dent was is gone forever. Then he slips, and uses a nickname that only Dent used for Gordon. He saved Gordon’s life for no ulterior motive. He “Accidentally” leaves behind files to help Batman and Gordon. In a way, Two-Face’s subconscious beliefs betray him. Despite what he claims, even a smallest sliver of hope can resonate in a person. In the end, the biggest fool in the story is Two-Face himself.
This is a parallel character arc for Batman. He believes that there is no hope for him to have a semblance of family or companionship. That is why he cut off almost all social ties. But unlike Two-Face, he realizes the truth, that he is only fooling himself for trying to act completely alone.
All of this comes to head, as Anthony Zucco presents his latest scheme using Haly’s Circus… dun, dun, DUNNNNN!

This issue may actually be my new favorite chapter of Dark Victory. It’s emotional, but it is subtle. It’s deep, but also subversive. The actions of the characters are complex and intriguing. Two-Face is particularly interesting. The only real critique is the strange and kind of dumb mock courtroom scene with the villains. Overall, it makes for one of the more satisfying issues of the series.