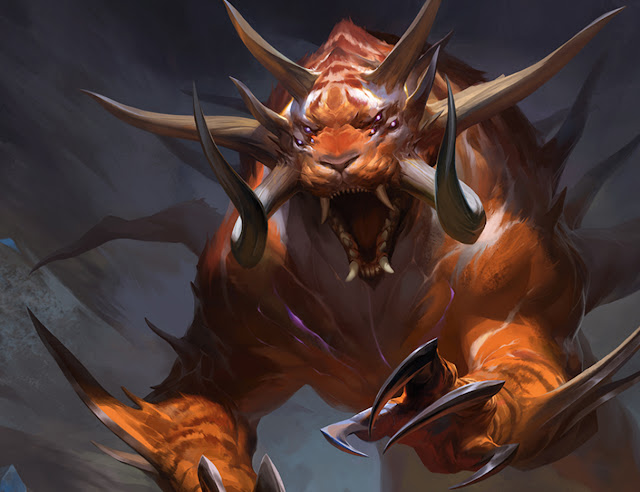 We're in full swing of our Ikoria safari. Please keep hands and feet inside the vehicle at all times. We've seen some of the formidable human forces that live in the civilised lands of Ikoria. We've got a cycle of power stones, and the first glimpse at a cycle of powerful, conditional spell cards based on the myths of the Legendary Mutants with gorgeous Seb McKinnon artwork. And Sharknado. They printed a card based on Sharknado. This is a very unique set... 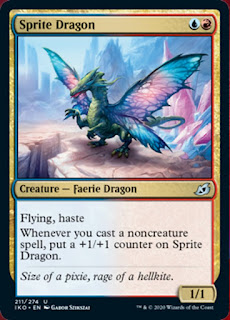 This little Uncommon is already my girlfriend's favourite card in the set, and very quickly becoming mine. I remember the likes of Stormchaser Mage and Lightning Stormkin. The creature with flying and haste for Blue/Red has always had a reputation. This one is no different, and I think already has a decent place in a decent deck. The Drakes shell has always been present, if not exactly relevant since Ravnica Allegiance, a miracle-gro creature like this little guy is definitely welcome. In older formats, I can see this being relevant in the miracle-gro archetype alongside Deeproot Champion in Pioneer - if that format were to ever let go of the sweet sweet combos it lives by these days. 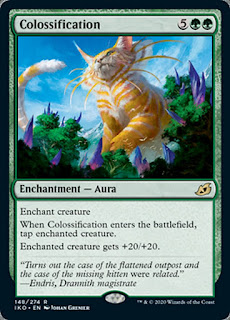 Look how big the kitten is! This hilarious bulk rare has set the record for being the largest creature boon on an aura, in the club with cards like Prodigious Growth and Eldrazi Conscription. Tapping the creature makes sense as it would take some physical strain to get this large, and it'd be an absurd immediate win on a very quick turn in certain ramp decks. I don't see that mattering, as Fling is available in both Standard and Pioneer, making the possibility of throwing an immense Hexproof creature at someone a real possibility and a funny way to die.

A very strong cycle of mana rocks - that for once are actual rocks. These will fix tricky limited mana bases and be considered in every Wedge colour Commander deck ever, giving fixing early, and cycling for something relevant late. 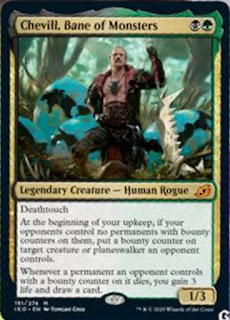 The big game hunter we'd expect in this setting. The cheap Golgari Legend puts extra value on targets you would hope to get hit with a removal spell. While he synergises with the card Bounty Hunter, it's a shame he won't be in any Mathas, Fiend Seeker Commander decks. A real puzzle if someone wanted him in charge of their deck. 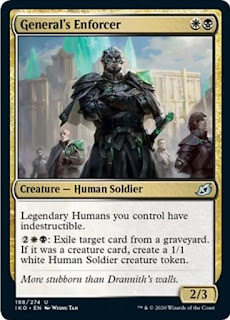 A 2/3 for 2 is already strong stats - admittedly two colours is tough, but it works well. A relevant creature type is very nice indeed. The gravy comes in giving your legendary humans, Commanders and Modern heavy hitters like Thalia. No this is not the second coming of Scooze, that ability costs too much mana. It's close. 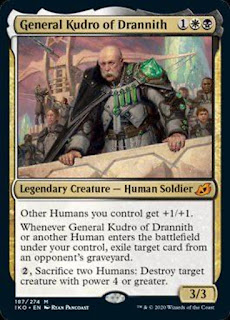 A legendary human who could benefit from an on-colour, on-curve bodyguard. The human's deck is very determined to hate on the graveyard. With Standard only getting to a place now where Sultai decks are filling up their graveyards, the space that Black/White is occupying with the Enforcer and Kunoros. What's relevant is his activated ability. A repeatable Smite is definitely something that the Human decks will want. 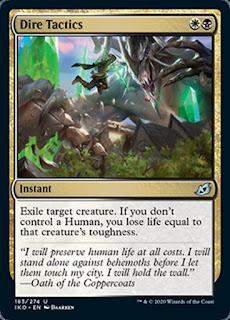 This however, is something the Humans decks definitely want. Two mana, instant speed removal for any creature is insane for Standard and Pioneer. The downside is either nonexistent or minimal for Black/White decks. I can see this being a real force and a relevant piece for a very long time.

The Mythos cycle is a rare that shows the Legendary mutants wrecking things on cave paintings. Bless Seb McKinnon. The design on them is immense and interesting; by paying very specific mana, the upsides somehow make these wedge colour cards fit all their colours in the pie. Snapdax feels like a White sac-wrath like Cataclysm, but Black and Red to be ruthless enough to select the saved permanents. Black's destroy target creature, mixing in Green and White for other permanents that Black can't usually touch. Red's spread damage, but with White and Blue for controlling those permanents. The Blue one, with Red/Green and the Green one with Blue/Black will doubtless be of similarly relevant power.

I find the designs of these to really show how diverse Standard is right now. The mana bases from Guilds and Allegiance really enables these kinds of colour intensive spells. The Adamant and Devotion mechanics from Eldraine and Theros really encourage Mono-Colour decks. There's so many different ways to build in Standard right now, and that's what's keeping the format so theoretically diverse. 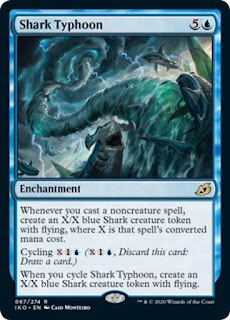 My head loves this card, seeing that it fits in the same space as Metallurgic Summonings in Izzet Commander decks. My heart recognises that this is Sharknado, and that they really really have no business calling out the second best bad movie ever. This set has done wonders for design and questioning what is real. 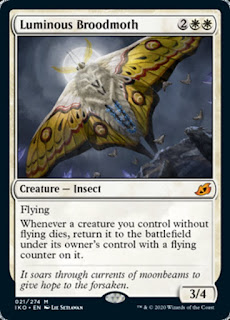 SO we can agree that Mothra here is one of the stronger cards in the set? Cool. Need further convincing? This is the top end of most White/X aggressive decks now. The devotion deck will play this, as will Boros and Orzhov Humans. Afterlife is still in the format, and this moth ensures that each dying creature you control gets a second pass. Aristocrats may push themselves into Mardu to get access to this card twice, and it can't be touched by Scorching Dragonfire.