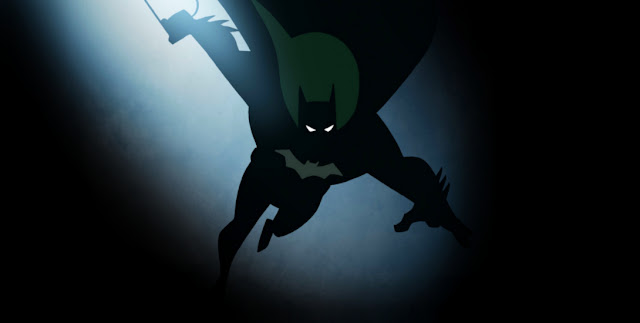 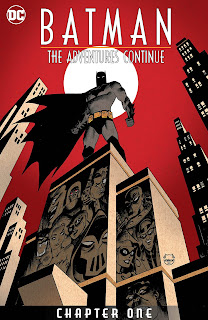 From the moment this title was announced, I’ve been on the edge of my seat with anticipation. As a huge fan of Batman: The Animated Series, as well as the comics it spawned: The Batman Adventures, Batman Adventures: The Lost Years, The Batman & Robin Adventures and Gotham Adventures, I’m sure you can agree that my excitement was more than justified. Now, finally, the digital first issue Batman: The Adventures Continue #1.1 is here… and it’s gorgeous.
Bringing back Alan Burnett and Paul Dini, writers from the TV series, is a stroke of genius in and of itself, but having art by Ty Templeton, who drew the initial run of Batman Adventures comics back in 1992, is the icing on the cake. Getting the book digitally has made me so happy, but I cannot wait to hold the physical comic in my hands, for the full experience. 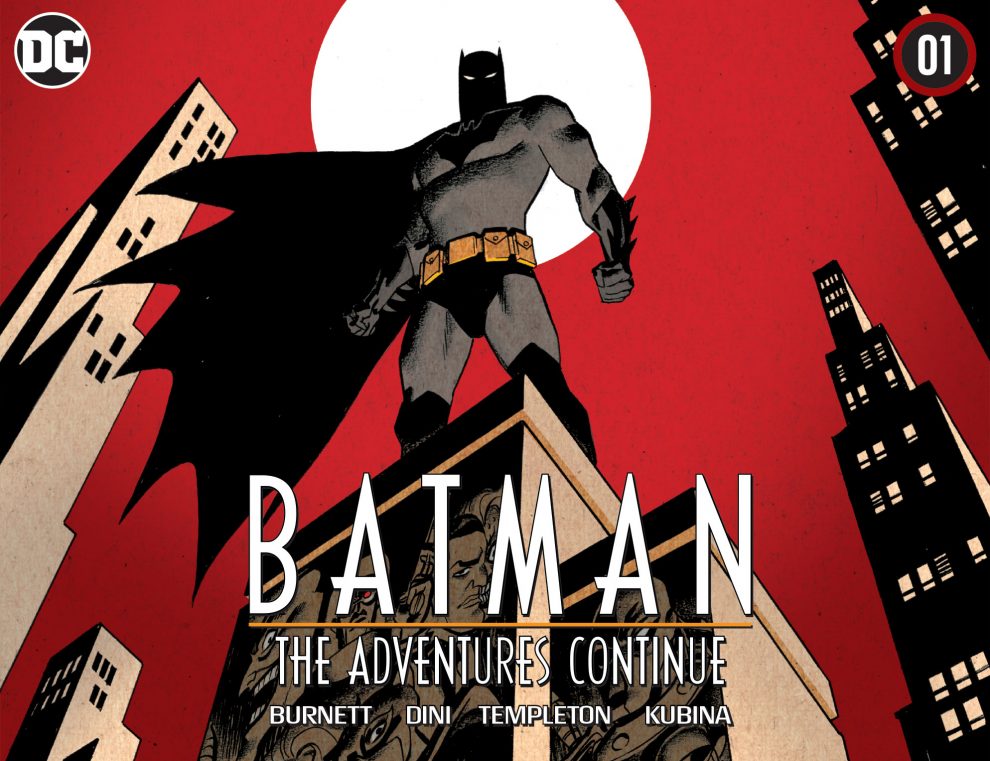 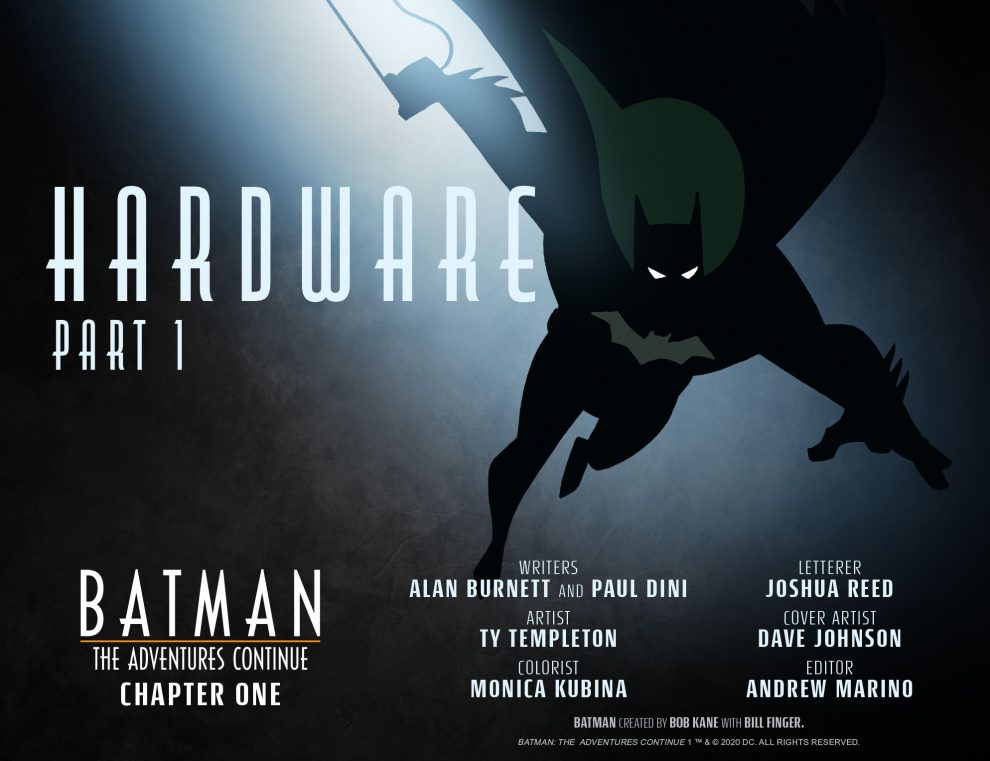 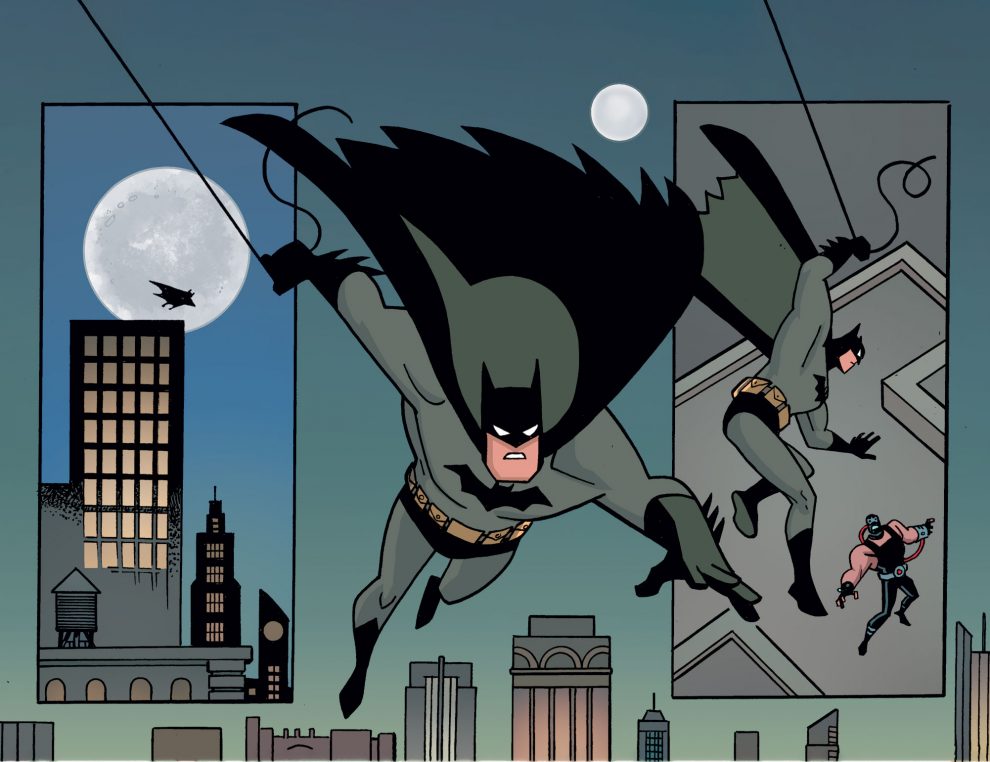 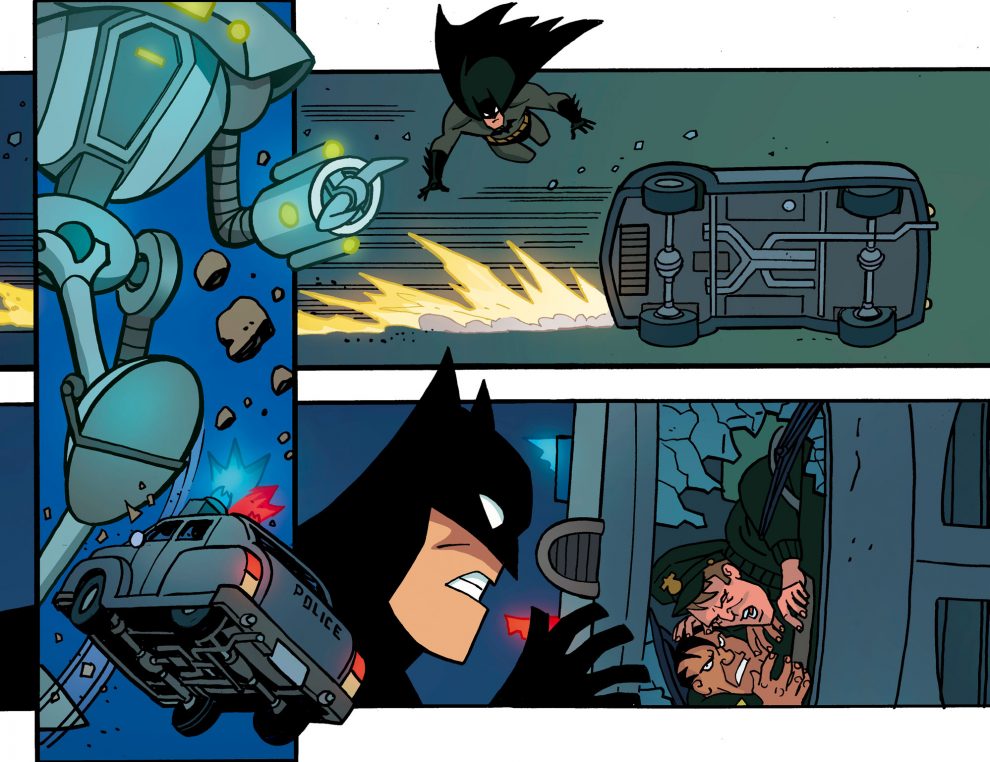 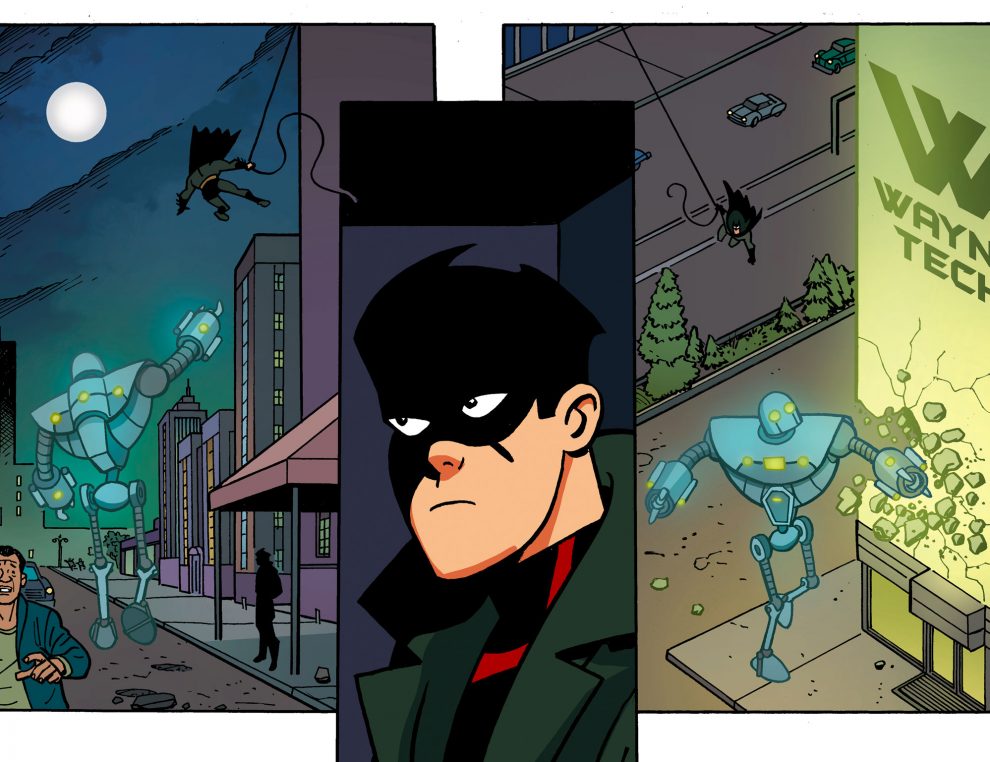 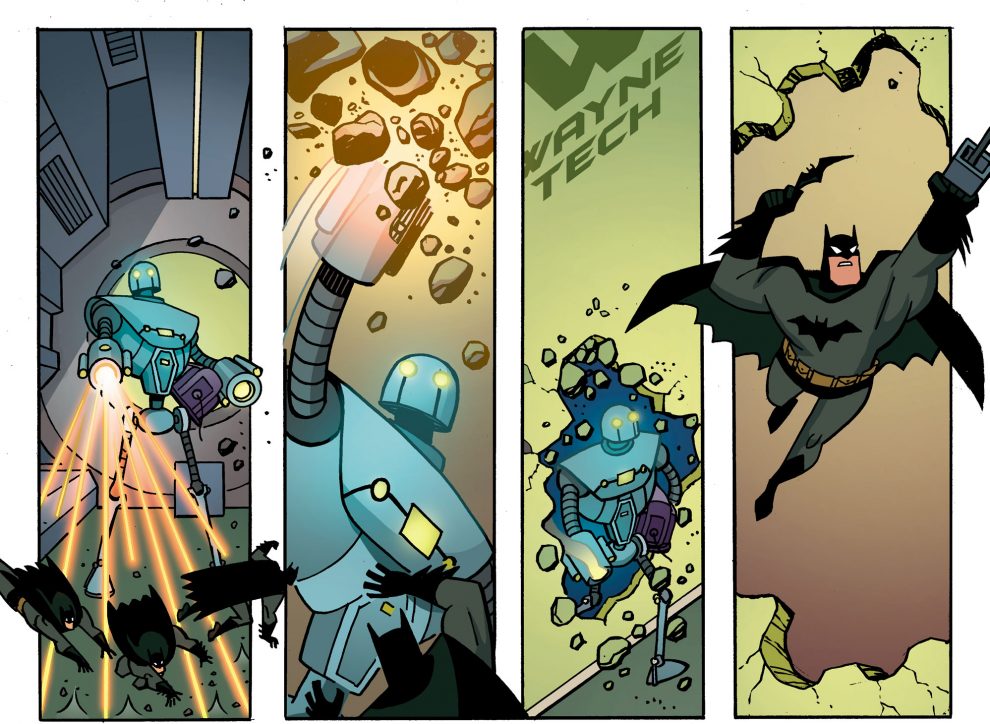 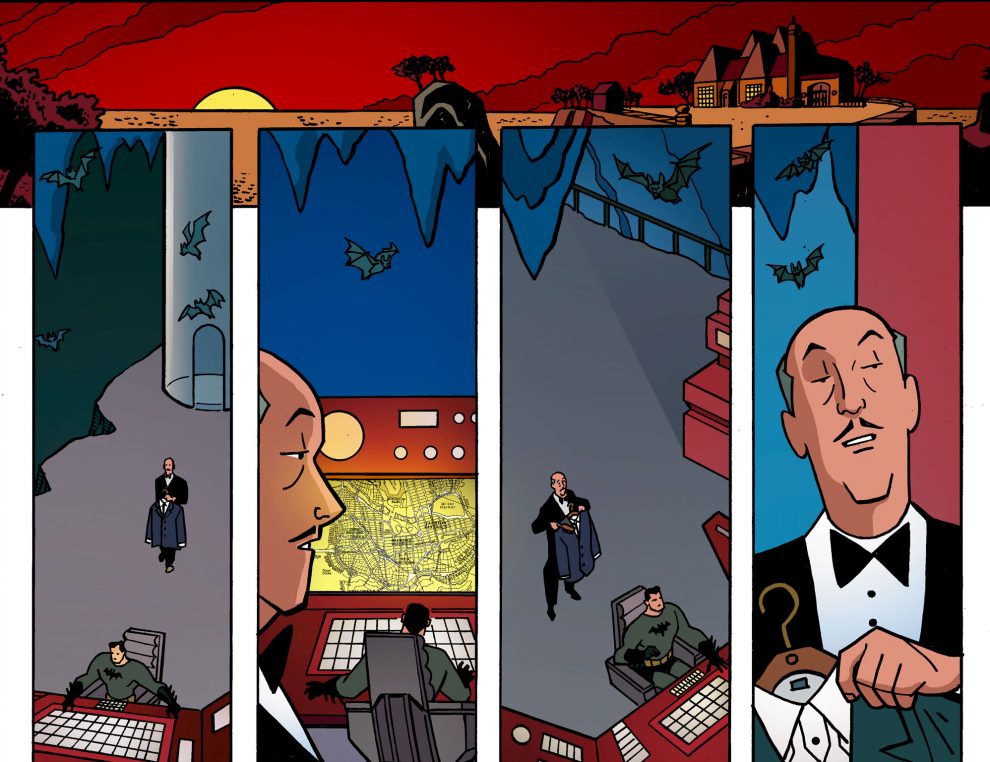 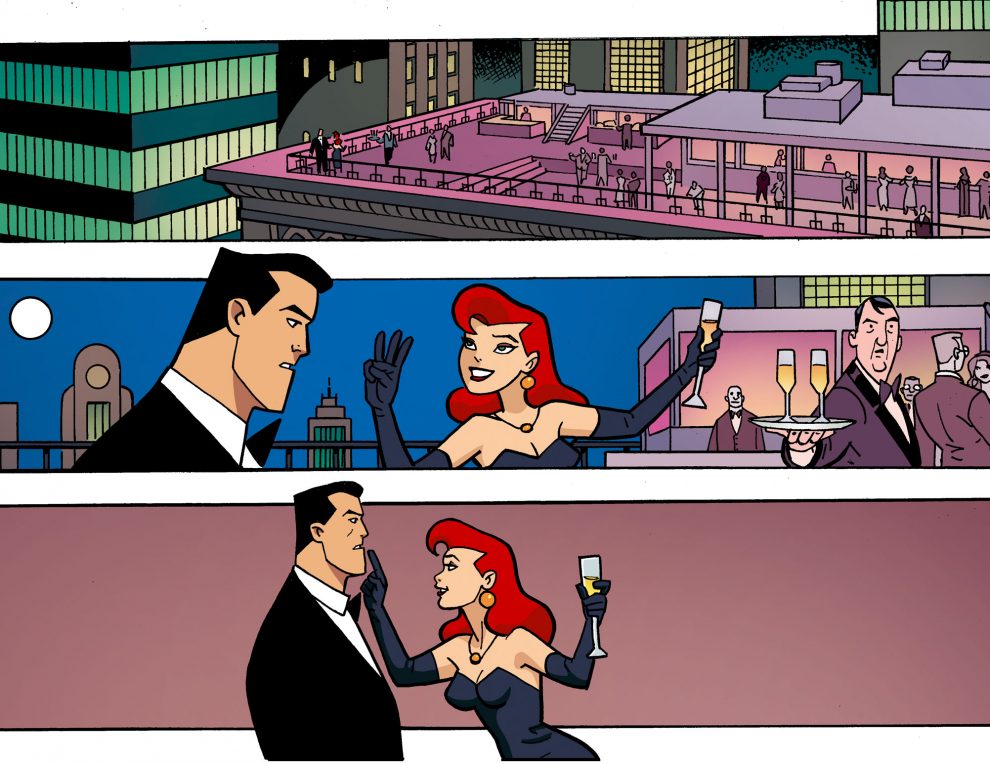 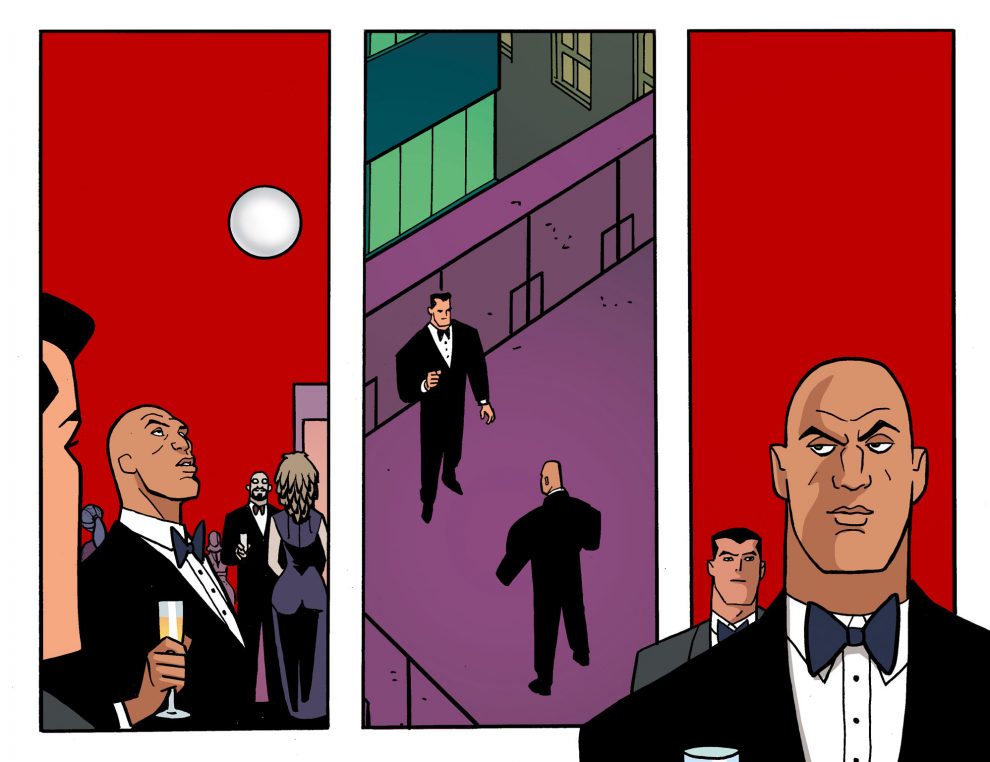 The story’s simple enough, but it grabs you from the get-go. Bane, giant robots, a mysterious figure in red, Veronica Vreeland… and Lex Luthor! We get 20 pages that are so chock-full of action that it’s mind blowing. If you listen to our weekly “I Am The Night” podcast you know that we’re frequently in awe of how much the creators of Batman: The Animated Series managed to fit into 20 minutes of TV; Alan Burnett, Paul Dini, Ty Templeton, Monica Kubina and Joshua Reed have duplicated that magic here.
Who is the mysterious figure in the trench-coat? Does the conversation about Tim Drake give us a clue? Paul Dini and Alan Burnett said this series would fill in gaps and tell untold stories. Are we going to see the Robin that didn’t appear in Batman: TAS? I can’t wait to find out!
Not only do Ty’s drawings take me right back by fully capturing the dynamic style of the classic show, but Monica’s bright, vibrant colors make the line art literally leap off the page.
While there are sequences that contain very little dialogue, the scenes between Veronica, Bruce and Lex, and the ones between Alfred and Batman, are text heavy… I’m not saying too heavy, as the conversations are terrific. Letterer Joshua Reed has definitely worked hard, but in a way that didn’t obliterate the beautiful artwork. The pages provided aren’t lettered, but in the finished comic the last three pages contain a lot of clever, witty and entertaining dialogue.

That cliffhanger! Noooooooo… the next two weeks are going to be torture! What I will say is that if the next instalment’s as good as this one, I can handle it.
Batman: The Adventures Continue #1.1 was well worth the wait, and I’m sure the follow-up will be too. I’m so going to buy this series when it comes out in stores.