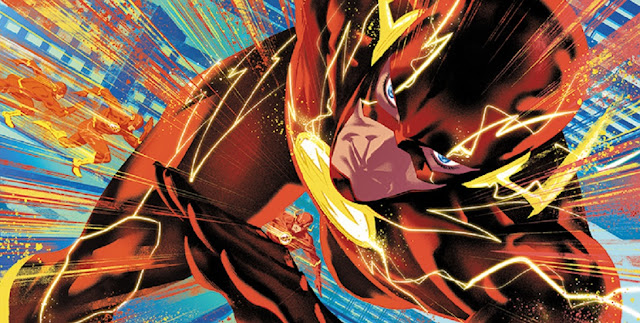 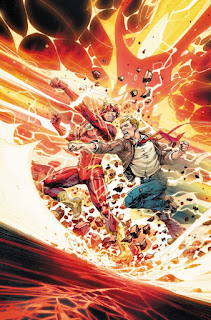 So, being a big comics fan I figured it was time that I started writing regular reviews, and where better to start than Flash #750? I’ve been reading Flash comics regularly since the beginning of the DC Rebirth and I’m really enjoying it. This issue is a big one, as we’ve hit another milestone in comics. The Flash #750 celebrates 80 years since the debut of Jay Garrick, the original Scarlet Speedster, back in January 1940 in the classic Flash Comics #1.
Now I will say, this isn’t a place for people to jump into The Flash. There’s so much going on with the current story that even just the numbers changing from the rebirth numbering to the original numbers is more than enough to confuse anyone. We’ve jumped from issue 88 to issue 750; add to that all the time travelling, multiverses, multiple Wally Wests, and it’s enough to explode your brain!

This issue does begin “The Flash Age” story arc, however it’s a continuation from the Flash age prelude, where we were introduced to Paradox, a new villain created by Barry Allen himself during a fight with King Turtle. This issue is very much a look at how the Flash has impacted peoples lives in a positive way all across Central City, which is a great contrast to his meeting at the end of the comic with Paradox, who’s life he impacted in a very, very negative way!
We also get some short stories in this bumper edition of the comic, “Beer Run”, about that lovable rogue Captain cold, “Why You”, a look into different versions of the Flash across the multiverse, “Flash of all Worlds”, featuring Mirror Master, “At the Starting Line”, a story focusing on the first Flash, Jay Garrick, and an Epilogue from “Flash Forward” the most recent Wally West mini series, that’s next level craziness, but awesome at the same time!
This issue is a great set up for what’s to come, while combining all the recent stories to create this new event that we’re about to embark on. I’m looking forward to reading and reviewing every couple of weeks, and I’ll try and keep them as spoiler free as possible. So, join me me for The Flash #751 soon.