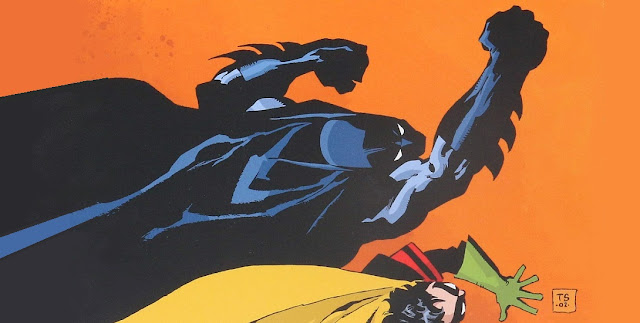 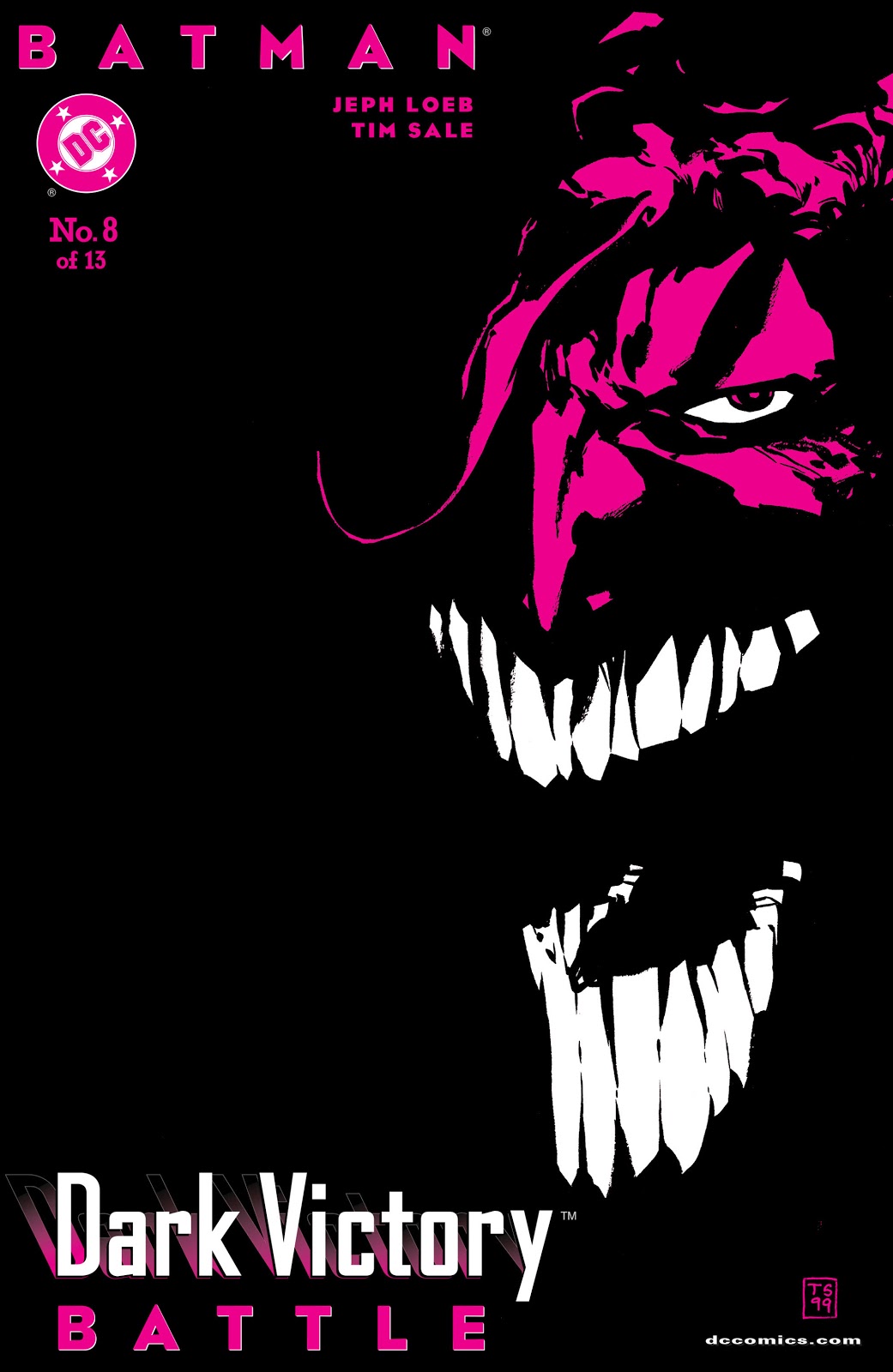 Dark Victory: Chapter 8: “Battle” features the Joker in an all-out war against the crime lords of the city with Batman scrambling to stop it.

The comic opens up in a dramatic fashion: the Joker commits a drive-by shooting of the Maroni’s restaurant. Two-Face sent Joker to kill off Gotham’s mobsters. The motif of “old crime versus new crime” is now literally playing out. The super-villains are encroaching into the mobsters’ territories and venues. Initially, the villains were satisfied being subservients or mercenaries to the Falcones or the Maronis, but now, Two-Face has recruited and emboldened them to take over the criminal underworld.
As he shoots up the Maronis’ Italian restaurant, the Joker quotes a classic film noir movie Chinatown.
“You dirty rat! You killed my brother! My sister! My daughter! She’s my sister and my daughter!”

In the story context, the Joker is just being facetious. In a meta-context, writer Jeph Loeb is paying homage to The Long Halloween and Dark Victory‘s film noir roots. It is clear that Loeb is a huge fan of Chinatown and The Godfather’s noir-ish elements.

The Difficulties of Working Together

In the aftermath of the shoot-out, Batman and Commissioner Gordon investigate the scene. Batman acknowledges how there is still residual awkwardness when working with Gordon. Despite Alfred reminding Batman the importance of working together, Batman still acts cold towards the Commissioner.

DA Janice Porter then steps in to complain how Batman should not be allowed access to crime scenes.
Later in the daytime, it’s now Mother’s Day. Mario Falcone tries to impress the bank board that Falcone Import’s money is clean and ready to invest. Bruce Wayne-being a member of the board- rightfully expresses concern. Before the debate goes too far, the Joker shoots up the meeting area, killing several board members.

When word of the shooting gets out to the GCPD, Gordon and Porter race to the scene. Gordon observes how odd it is that Porter refers to Mario Falcone on a first-name basis. It implies a more intimate relationship between Porter and Mario.

By the time Gordon and Porter get to the parking garage, they find yet another Hangman victim strung up. This time it is Gordon’s personal bodyguard. A newspaper clipping announcing Gordon and then-DA Harvey Dent’s crusade against the mob pinned to the body. The clipping’s message writes: “Murder in the first degree”.

On the far side of town, the Joker continues his rampage by targeting Sofia Gigante. He callously pushes her down a flight of stairs. Then the Joker makes an interesting hypothesis: he thinks Sofia is actually not crippled.
“Now… call me “crazy”–okay, you’re crazy. But, I think you can get up.”

However, Sofia is rescued by Alberto Falcone when he shoots the Joker in the shoulder. Note how artist Tim Sale dramatizes the gunshot with a giant “BLAM” onomatopoeia. This is ridiculous, since Alberto has a baby bottle nipple on, which should act as a silencer. Clearly the “BLAM” is supposed to be a misdirection to fool the reader that Sofia was the shooter. And the .22 caliber gun and baby bottle nipple is a clear callback to Alberto’s time as Holiday. It is probably an artistic mistake, but the scene would have been more realistic if the gun did not have the baby bottle nipple on it.

Speaking of mistakes, Batman bursts in and makes a stupid assumption that Alberto attacked Sofia. He starts whaling on Alberto until Sofia calls him out for idiotically missing the Joker. Batman’s mistakes and oversights are getting sloppier and sloppier. This is actually the second time that Batman wildly accuses Alberto of breaking his parole. Batman is so emotionally invested in catching Alberto in the act, that he blindly ignores other clues around him. While he knows he needs a second set of eyes, he still has not fully learned the value of it.

Batman quickly catches the injured Joker and interrogates him on why he’s targeting the Falcones. The Joker gleefully dismisses Batman.
“After all this time — you still don’t get the joke! If you hadn’t shown up–I would’ve killed all of them!”
Batman assumes he is talking about Alberto and Sofia. But looking at the Joker’s other targets, he is actually talking about wiping out all of the mobsters.

Meanwhile, Anthony Zucco is shaking down the head of Haly’s Circus. Zucco wants to use the carnival and its trucks to move illegal contraband across state lines. When the circus head disagrees, Zucco points to a bright poster of the Flying Graysons and subtly threatens to kill them. Unbeknownst to either party, a young, acrobatic boy is witness to the whole exchange.

At Wayne Manor, Bruce admits forgetting to visit his mother’s grave site on Mother’s Day. He continues to lament how the day is now over as he observes two circus tickets. Since he pushed Selina Kyle away, he has no date to go with. On the other hand, Alfred points out that he should go regardless. Bruce donated via the Martha Wayne Foundation, he should attend to represent the charity’s name. Interestingly, it is one of the subtle ways that Bruce’s mother influences his actions.

This issue is a very pedestrian comic book. While there is nothing outright wrong with it, it does not fully explore the themes it aspired to. The title of the comic is Dark Victory: Chapter 8: “Battle”, but one can argue there is none, it’s just Joker killing people. Furthermore, outside of a few mentions, this comic is completely devoid of Mother’s Day. Perhaps the most important part is the ending where Martha Wayne’s compassion inspires Bruce to attend the circus. There are no real standout scenes from the comic and Batman acts kinda dumb. It’s another stepping stone chapter that lays down the plot for better chapters to come.