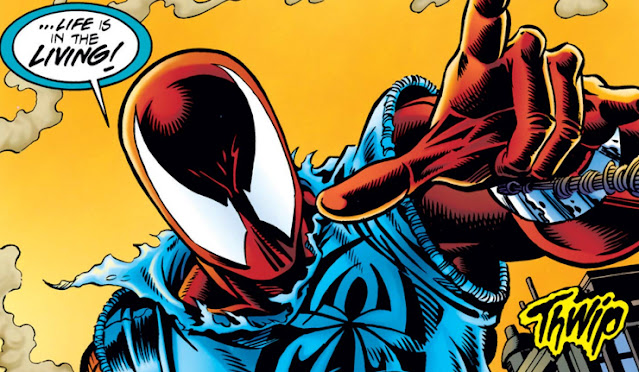 In the aftermath of the  confusing "Smoke and Mirrors" episode, we see Kaine trying to access some unknown data from the Jackal's computers. Except, he accidentally activated yet another pod that releases yet another Peter Parker clone. Off-topic, but it's odd that this clone comes straight out of the pod fully-clothed. But I digress. 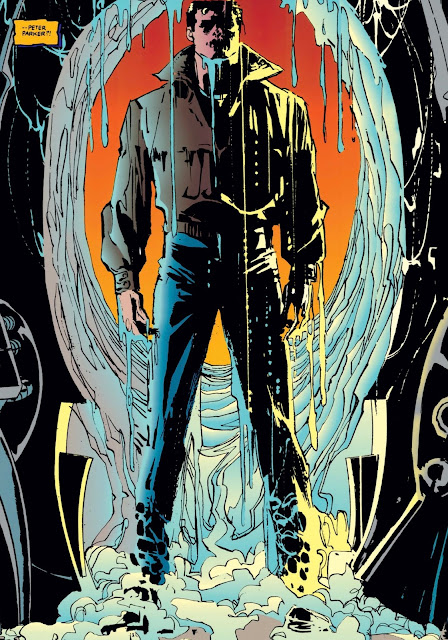 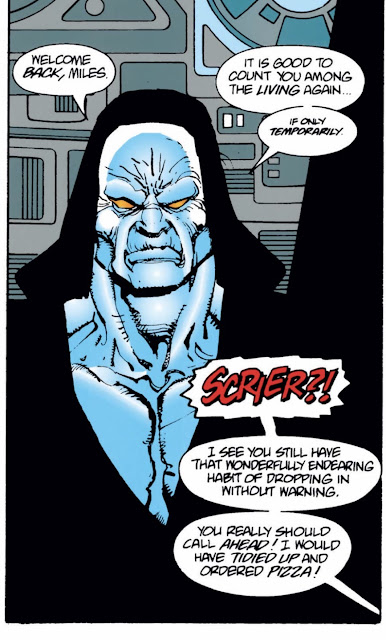 Also, the Jackal dropped a hint of his plans. It has something to do with Ravencroft, the supervillain asylum that Judas Traveller invaded in "Power and Responsibility".

Meanwhile, Ben Reilly is being extra-creepy and checking out Flash Thompson coach kids basketball. The kids rightfully wonder who's that stranger in the corner checking them out. Coach Flash tells them to ignore him. That's not teaching them proper stranger danger, Flash. 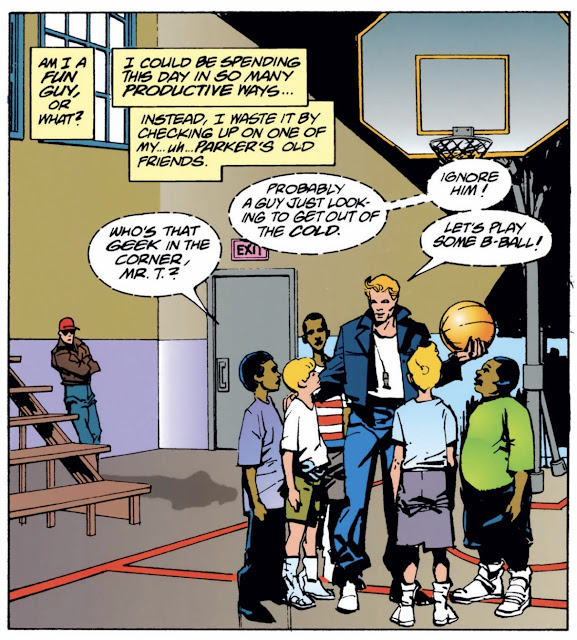 At the NYPD, Lt. Raven is positive that he is narrowing his suspect list. Whoever it is, they've never been convicted for any crimes before. Hmmm... I'm sure that won't affect our heroes at all. Nope.

So while Peter Parker is bummed out that the Daily Bugle is offering no paid assignments, he is stopped by Kaine. Apparently, Kaine was able to snag a paper file from the Jackal's lair that definitively states Peter is the true one and Ben is the clone. Unaware that Kaine is his clone that posses all of his memories, Peter tries to pretend that he doesn't know Spider-Man's secret identity. Even more ridiculous, he re-appears to Kaine as Spider-Man pretending to be two different people. It's really silly in retrospect. 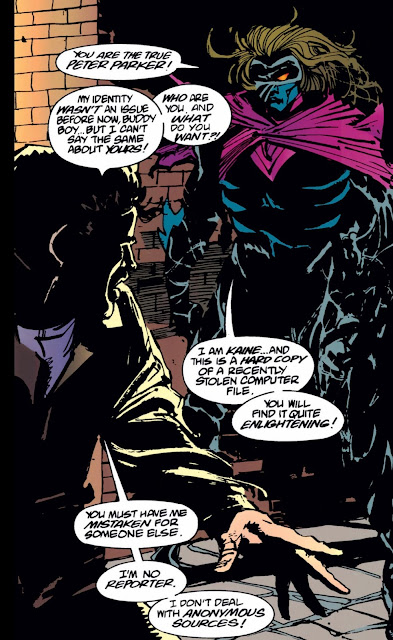 So the Jackal crashes Flash's basketball game, forcing Ben to confront him as the Scarlet Spider. Once again, the Jackal's motivations for any of this unclear. Maybe he is trying to draw Ben out of hiding? Maybe he is trying to torture Peter by killing his friends off? Who knows! The Jackal is one of the most broadly-written characters in this comic. Even his diminutive sidekick Jack has a more clearly-defined motive than him. 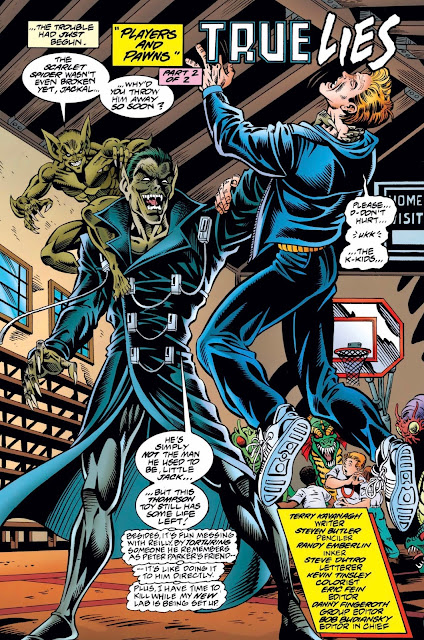 So Ben fights and defeats the Jackal. And Peter battles Kaine, although the warped clone escapes him. Surprisingly, the police actually cart the Jackal off. But first, Jack hands a disc that for sure-totally all true- proof that Ben is the real Peter.

Out of spite, Jackal  triggers Jack's body to fall apart. So that's interesting that Jackal not only can trigger his clones to fall apart at any time. That begs the question, why doesn't Jackal just do that to Ben and Kaine? 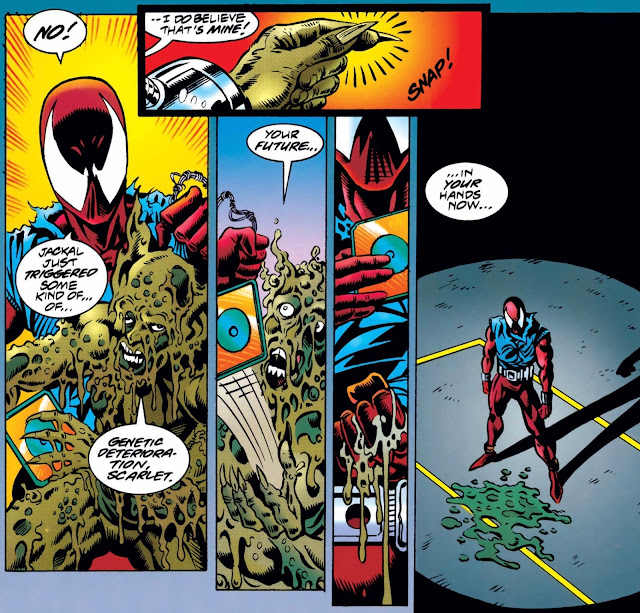 Probably the most powerful sequence in the whole comic, Ben tosses the disc in the waters. Who cares what's on that disc? He's now his own person. He does not need validation whether he is the "real" Peter Parker or not.

That's some tremendous character growth from Ben since the beginning of "The Exile Returns". He went from not even believing that he is a real person to feeling like he has real self-worth. Ben's character growth is easily one of the top highlights of the Clone Saga.

At the hospital, Aunt May miraculously wakes up from her coma. She's still clearly very weak, but she's still asks to see Peter. 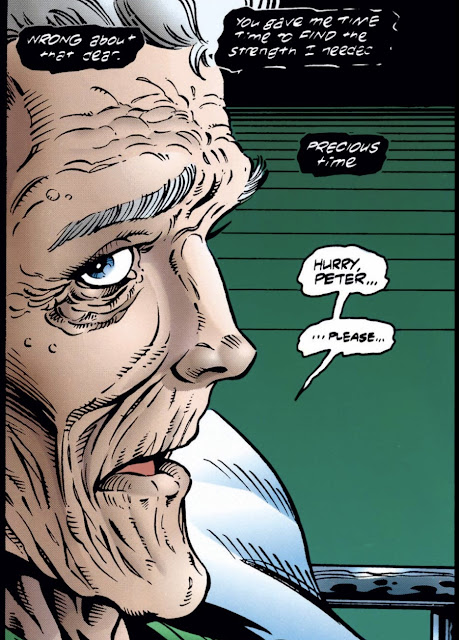 Elsewhere, the enigmatic other Peter clone is wandering the streets like a vagrant, but when faced with a gang, he takes them down with spider-powers... Uh oh. 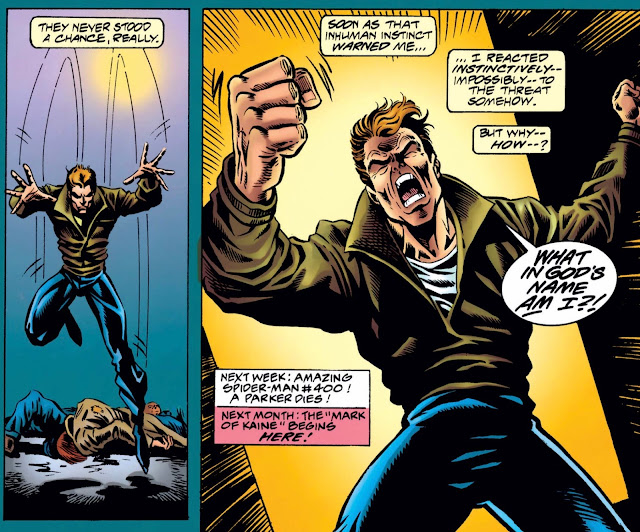 This story arc is an improvement over the convoluted "Smoke and Mirrors" arc. This actually had a number of significant story developments. However, it is also redundant. Another clone. Another Jackal attack. More lies or mis-truths to confuse who is the clone.

Given how aimless the previous story line was, the two should've been combined into one narrative. It would've cut down on the storytelling "fat" and made for a more succinct narrative.

Hey, see how Ben Reilly is shaping up to be the ultimate underdog character. A character who doesn't even have his own identity to call his own? Now that's someone who you want to cheer for. He's an even bigger underdog than even Peter Parker. It's easy to see why fans resonated so well with Ben. 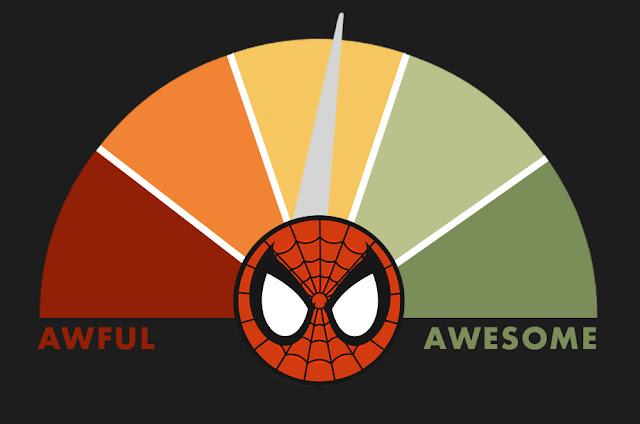