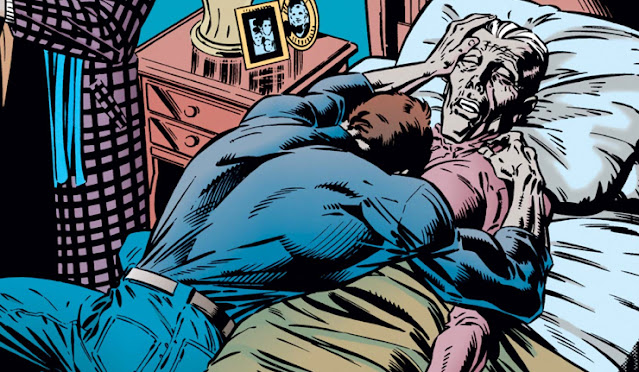 This is one of the comics that I was most excited to re-read when I started my Fan Retrospectives. This is considered one of the best issues in not just the Clone Saga, but in all of Spider-Man comics. It proves that if the Clone Saga strips away of most its extraneous subplots and characters, it can be wildly successful as an emotional tale. Let's dive in and see what makes "The Gift" so great.

For uninitiated readers, "The Gift" is simply about the last living days of Aunt May. She awoke from her long coma and is discharged. She is weak and very frail, but Aunt May is tired of doctors and being prodded for tests. She just wants some quality time with Peter, Mary Jane, and her friend Anna Watson in her waning days. 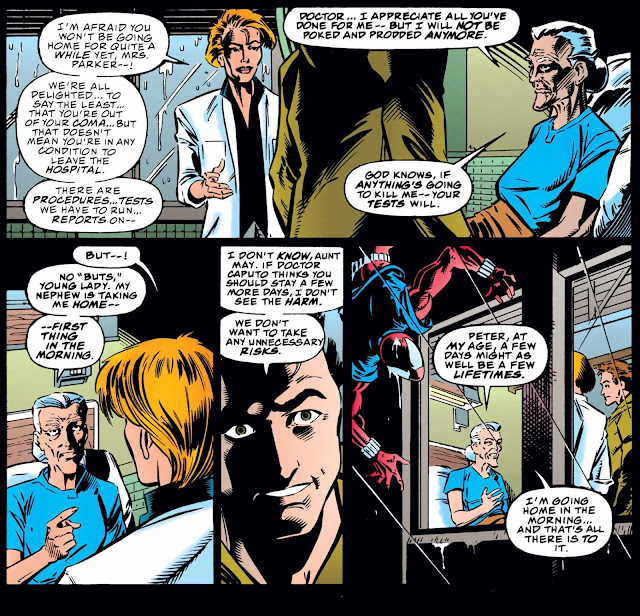 The Scarlet Spider witnesses  Peter and Aunt May's reunion through a window. Unfortunately, even with Aunt May present, Peter still acts like an ass towards Ben. Peter shoots Ben a dirty look, implying that he's not wanted here.

The experience of Aunt May's impending death gives this issue a more down-to-earth  feeling that a lot of people can resonate with. Who hasn't had the experience of a relative or loved one who is in the hospital? Who hasn't had to deal with mortality of their loved ones and the bitter-sweet moments that you know their time is almost up?  These are everyday, mundane situations readers experience first-hand. It's certainly more relatable than Ben Reilly's identity crisis or Peter's overwhelming clone problems. This is a some heavy emotional stuff that hits home with many adults.

When Aunt May returns home, she instantly figures out that Mary Jane was pregnant. She then talks about how having a child is one of the greatest responsibilities. 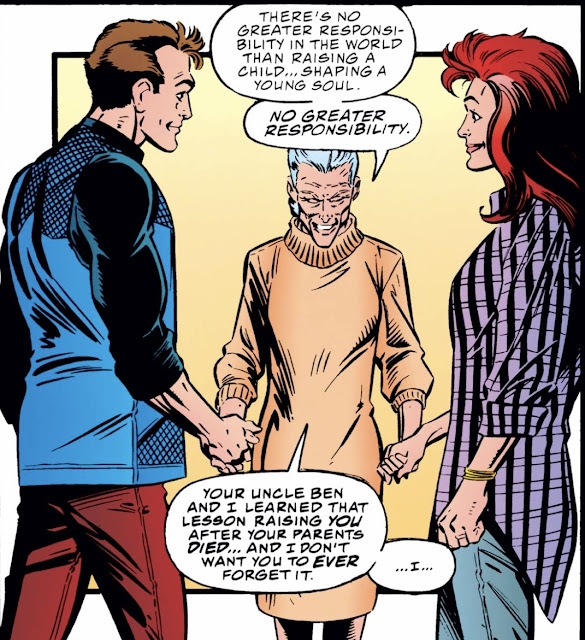 That line demonstrates why the baby subplot is a development that perfectly fits into the overarching Spider-Man theme of responsibility. It makes sense for Peter - Mr. Responsibility-to have handle raising a child-the ultimate act of responsibility. Thematically, it is such a logical for the character's arc to go from troubled orphan teen to caring for a life himself.

Speaking of  logical developments,  the revelation that Aunt May always knew that Peter was Spider-Man is a long time coming. It is a powerful scene, but so mind-blowing to readers at the time. All this time, both readers and Peter assumed that May would die if she discovered his secret identity. However, it turns out that she figured it out and gave her blessing for Peter to continue web-slinging. 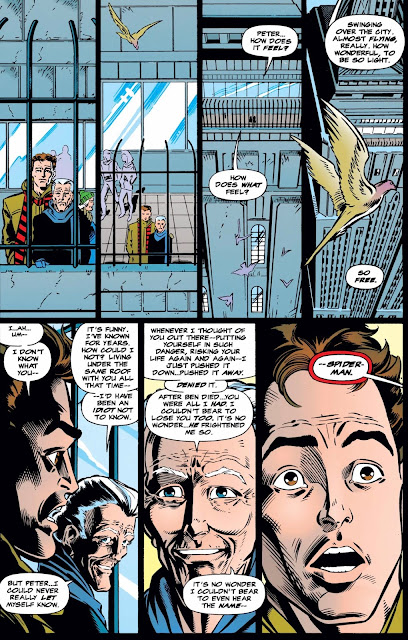 Going back to other characters, Ben tells Peter that he is leaving New York to hit the road again. He initially came back to see Aunt May, but since she is about to pass on, he's leaving. Ben also lets Peter know how lucky he is to have Aunt May and all of his social supports, since Ben had none of that.

I can really see why readers really latched onto Ben so much.  He acts like a perfect foil for Peter. We're used to seeing Peter have a burdened life and being the lowest rung on a proverbial totem pole. However, Ben reminds Peter and readers that Peter had it pretty good in comparison to him. Peter has his friends and family. Ben doesn't even know who he truly is.

So back to Aunt May, she finally falls ill to a fever and resides in her bed with Peter by her side. Despite Peter's insistence to call a doctor, May tells him it is her time. As she dies, Peter recites a passage from Peter Pan that May used to read to him as a child.

"Second to the right... and straight on till morning." 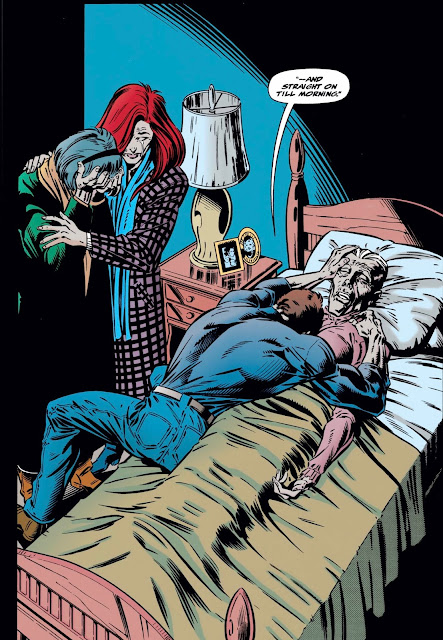 And with that, Aunt May passes away in her sleep. That's a perfect, beautiful ending for a long-running character. Of course, it all gets ruined when she is found "returned from the dead"in 1998.

There was something really poetic about Peter  letting go of his "parent", while also welcoming in a new generation. Unfortunately, both of these concepts have been forgotten since the Clone Saga ended.

To be totally honest, Aunt May has had some great stories since she was revived; the best post-resurrection was when she re-discovered Peter's secret identity again.... except that was also reversed later when Peter wiped the worlds' memory of his secret identity.

Now that I think about it, Marvel's refusal to let go of Aunt May is probably the biggest piece of proof that Spider-Man never "ages" or "grows up". He'll always feel like a child if his maternal figure is always around. It makes the whole comparison to Peter Pan even more apt, since Peter is now a character who cannot grow up either.

So anyways, let me step off my soapbox. There are also a couple of Clone Saga-related subplots that are introduced or continue from previous issues.

First, yet another mysterious shadow man spies on Peter Parker. It's Mr. Nacht, a note-taking goon who works for Judas Traveller. 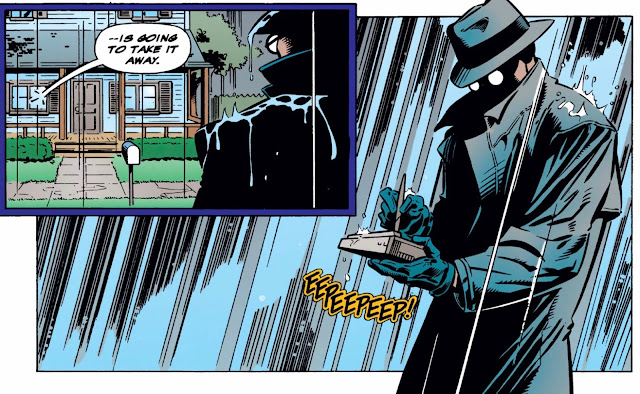 Second, we also check in with the other Peter clones still wandering the streets like vagrants.

Third, the Jackal is imprisoned in Ravencroft. However, he reveals to a guard that his imprisonment was all part of his plan. 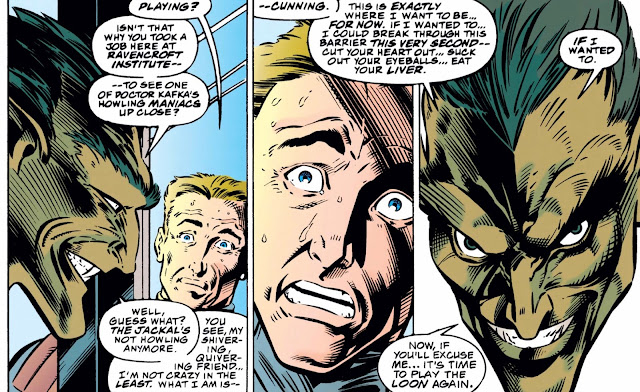 Fourth, Kaine is still stalking Ben from the shadows. 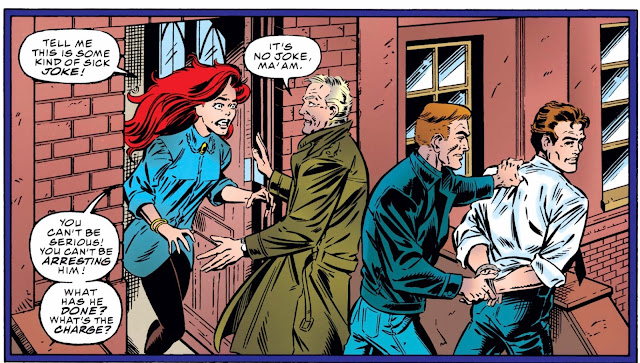 Side-bar about Mark Bagley. His art has always provided some of the most expressive faces and examples of character-acting in superhero comics. 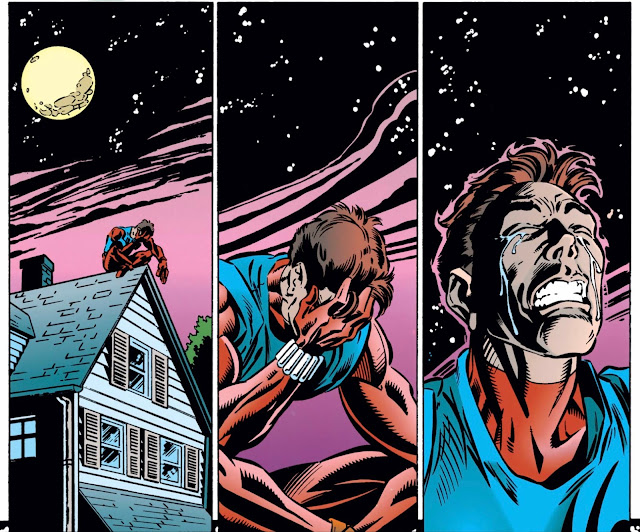 No offence to any of the other then-Spider-Man artists, but Bagley is the best-suited for this issue. There is a balance of big superhero scenes, but it most comprises of smaller, emotional scenes. Bagley's visual talents perfectly fits this issue so well, because how nuanced the "acting" is. Despite liking their style, I have a hard time imagining the issue being as emotionally effective if Steve Butler or Tom Lyle handled the art.

This is the best issue of the Clone Saga. Period. There is no doubting the genuine emotional intensity of Aunt May's death. It also progresses a few subplots and also creates an edge-of-your-seat cliffhanger.  It's a near-perfect Spider-Man comic on every level. 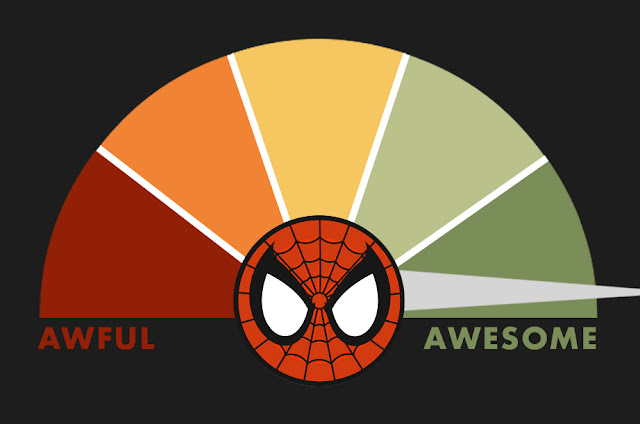