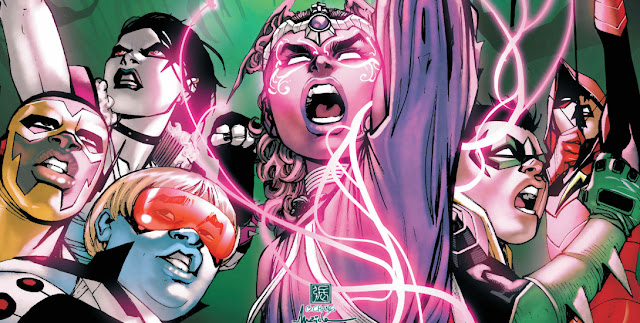 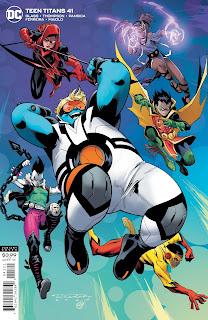 Teen Titans #41 wraps up the epic Djinn Wars storyline, and after this issue the team will never be the same again. We last left our heroes after they’d placed their bodies in a near-dead state, so that their spirits could travel into Djinn’s ring. This attempt to rescue their magically imprisoned comrade left their vulnerable bodies guarded by the powerless Jakeem Thunder, as his Djinn was also under the thrall of the evil Genie, Elias. 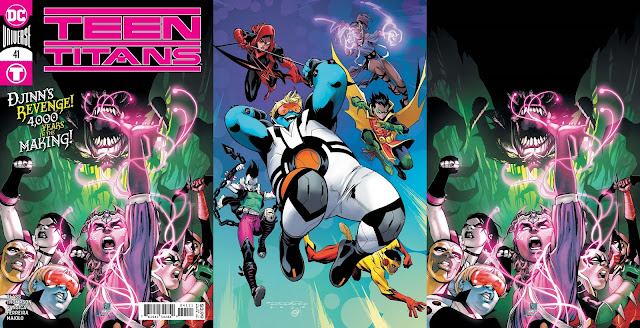 Twists, turns, shocks, surprises, revenge and revelations, this issue does not disappoint. We finally get to see the Teen Titans united and working as the team we always knew they could be. This group of teenagers is truly impressive, in terms of both their abilities and determination… but are they strong enough to take on an army of beings with god-like levels of power?
Writers Adam Glass and Robbie Thompson keep delivering great character and outstanding action. Their strengths also include giving us very clever plot twists and resolutions that don’t just follow formulaic storytelling, or cliched tropes.
Marcelo Maiolo is the MVP of this issue for me, as his use of color makes the citadels of hell and spires of heaven, as beautifully drawn by Eduardo Pansica and Julio Ferreira, truly stand out. Pansica and Ferreira also do a great job in translating the fears and frustrations of our heroes, and the battle between them, Elias and his magical army is comics gold. 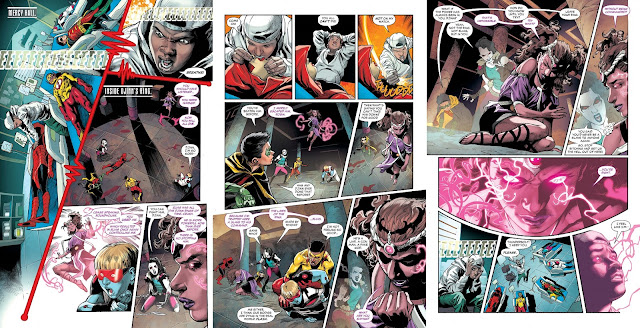 Letterer Rob Leigh is also fighting fit: from his flat-lining heart monitors to all the sounds of violence that follow, his work never ceases to impress.

Man, I can’t really spoil stuff but, however fitting and apt the ending to this storyline is, it really isn’t what I wanted. This series has been knocking it out of the park since Adam Glass took over as writer, and his new characters Crush, Roundhouse and Djinn, have become firm favorites. In fact, for me this run has been one of the best ever, and I was around for the legendary Wolfman and Perez series of the 1980s!
I know that the book will continue, and that there will always be a Teen Titans, but I’m going to miss this combo immensely. 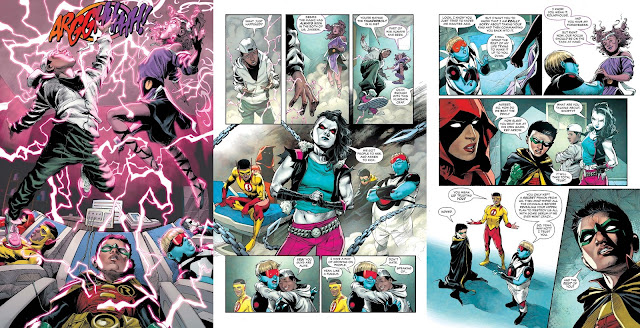 Teen Titans #41 is strong, but that’s really no surprise. This book has been on roll for close to two years, with every issue delivering outstanding levels of writing and art.
Everyone talks about the Batman, Superman, Wonder Woman and Justice League books, but Teen Titans has been of similar, or sometimes greater quality than all of those others, for a long time. For me this series is grossly undervalued, under appreciated and under-rated.
While I didn’t receive the ending I wanted, I still got a brilliantly written and visually impressive piece of entertainment. I’m fully invested in these characters, and their futures.