Last we checked, Peter Parker and Mary Jane are back in New York after being in Portland for only, like, two months.

Peter and MJ visit Ben Reilly in his apartment to talk about the Spider-Skeleton. Ben shows the literal skeleton in his closet. But Jessica comes in, which sends Ben, MJ and Peter into a mad scramble to hide the Spider-Skeleton and explain why Peter and Ben look the same. 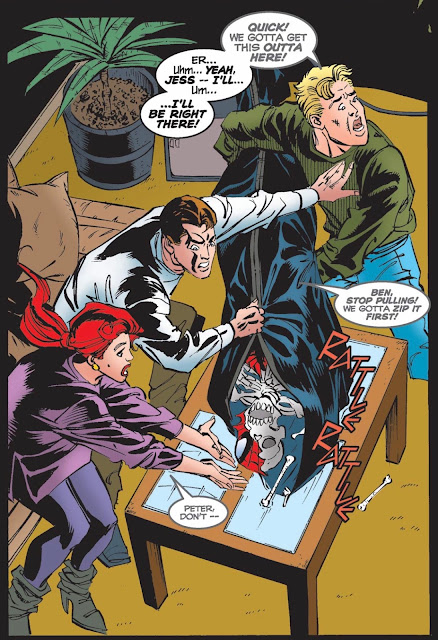 The sequence is comedic gold that looks more in place at a sitcom or a Abbott and Costello routine. MJ is the best in this scene, where she quickly does not miss a beat and fabricates a lie on the spot that Ben and Peter are cousins with twin fathers.

He only just recently reconstituted himself and tried to download his consciousness back into his physical body, but discovered that he's unplugged and his body is being taken by Doc Ock, who's also his daughter Carolyn.

But in the midst of explaining all that to Ben, Jessica walks in and MJ quickly says that Trainer is the Weather Channel. Trainer then plays along with it and starts reporting the weather. 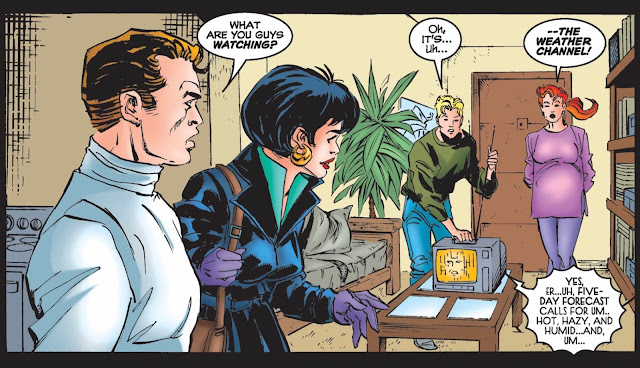 This scene is hilarious and completely out-of-tone with the ultra-seriousness of the Clone Saga. It probably went on too long, but truthfully, it's my favorite part of the issue. Todd DeZago is really coming into his own as a writer. His MJ is quick-witted and jaded and his Ben is super goofy.

More about the way he writes the Peter-Ben relationship. DeZago leans into the whole "They're like brothers who think alike" dynamic. The best example is when Ben is showing off his apartment and notes how the narrow alley between his window and the neighboring building is perfect for wall-crawling in and out without being noticed. MJ's reaction is "whatever" but Peter just smiles and says "cool".  This is the best example of the fun Ben-Peter relationship. There is not nearly enough of that in the Clone Saga. 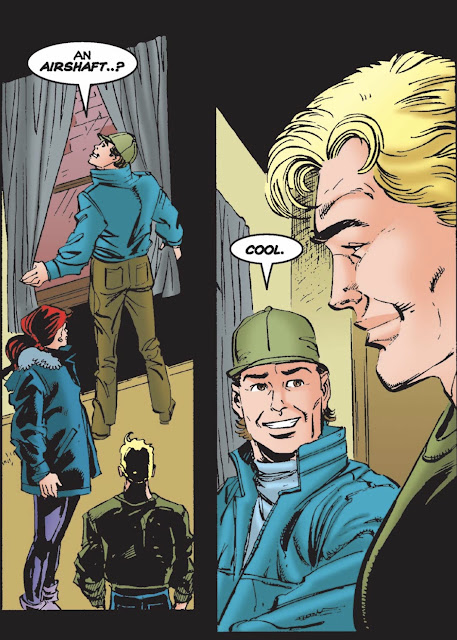 Anyways,Carolyn Trainer tries to discharge Seward out of the hospital the legal way, since she's his only known living relative. I don't know why she felt the need to disguise herself with an floppy brown wig, but whatever. 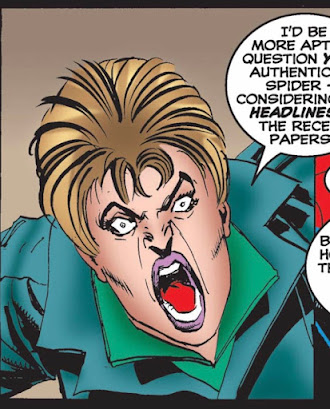 Spider-Man gets interferes and Carolyn loses her cool and starts attacking him.

By the way, I haven't talked about Sal Buscema's art much despite being a consistent artist throughout the most of the Clone Saga. He has a workman-style of art, not overly lavish or detailed, but gets the story telling job done.

He's also the oldest artist of the core Spider-Man books at the time. That means that he comes from an old-school comic book approach to storytelling, where they always encourage drawing the most bombastic, over-the-top poses to depict action.

That's why Buscema almost always has at least one issue where a person is getting punched and they have a brokeback pose while flying back. It's exciting-looking, even if it's not realistic.

This is different from more current artists, who are more inspired by making the comic more cinematic, like watching storyboards for a film. 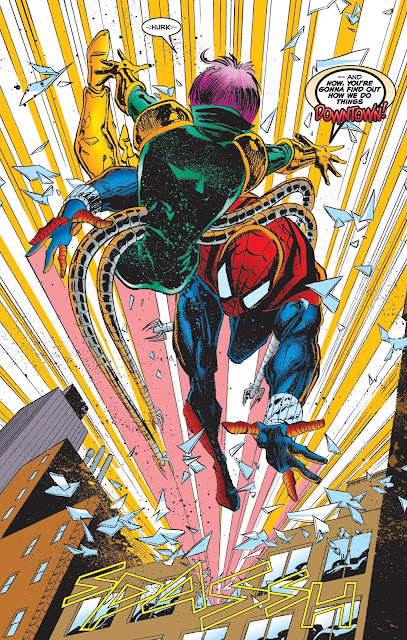 There's a huge difference between how Buscema presents his page composition versus a newer artist, like say, John Romita Jr.

So I bring it up because Buscema draws a splash page where Spidey tackles Doc Ock out of the hospital window. But he draws it with such over-dramatic way, it looks like the hospital is exploding too.

So in the end, Spider-Man defeats Doc Ock and resuscitating Seward out of his coma. With the day won, Ben heads to Jessica's apartment for a date only to find she has a room covered from ceiling to floor of Spider-Man photos. Yesh. Obsessed much, Jessica? 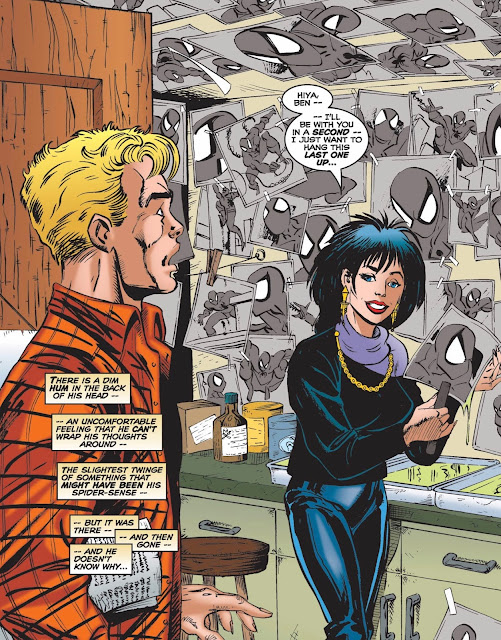 This issue is a unique one. I actually like it for the out-of-costume drama and comedy. But once we hit superhero territory, it gets kinda boring. The character interactions between Ben, Peter, Mary Jane, and Jessica (to a lesser extent) are so funny and engaging. I only wished we had more scenes with such sharp characterizations and comedic bits.
On the flip side, the Doc Ock narrative is a letdown.  The biggest problem is that we never know why Carolyn Trainer is so obsessed with getting her father back. With no established motivations, there are no real personal stakes. This makes the fight scene seems a little pedantic. Not bad, but not nearly as fun as the opening scene with Ben and the skeleton. 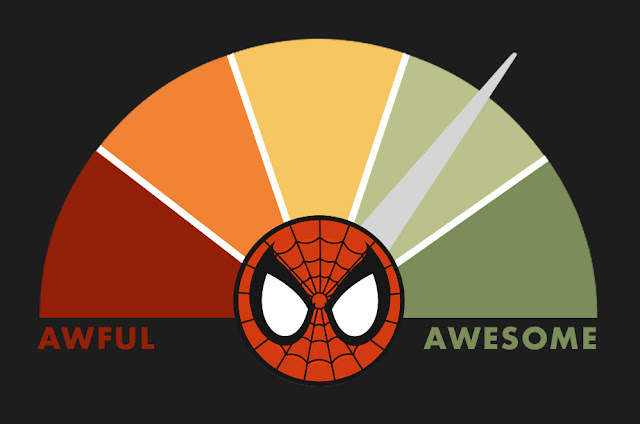