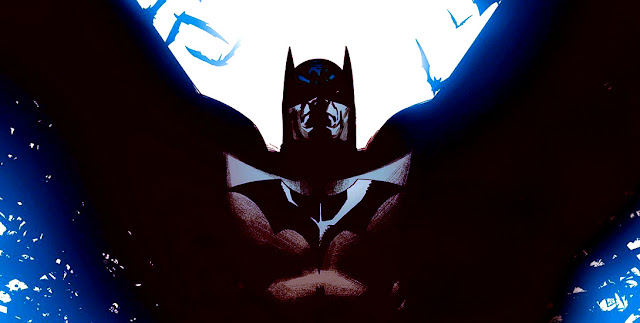 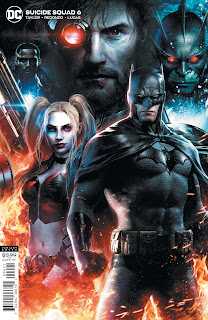 “Enter The Bat!” screams the cover of Suicide Squad #6. As our titular team’s odyssey takes them to Gotham City, making the interjection of a certain Dark Knight simply inevitable. With a bounty on their heads equivalent to the national debt of certain countries, it’s time to keep a low profile.

Removing one’s neck bomb is relatively straightforward when you know the right person, but when that person is Dr Pacat, a former inmate at Arkham Asylum and possessor of fewer scruples than President Trump, then it’s just a matter of time before Task Force X have a terrible assortment of assassins hot on their heels.

These opening exchanges are a lot of fun, and showcase Tom Taylor’s talent for inserting spiky, snarky dialogue into extreme situations. With such a diverse array of oddball characters to play with, Taylor must feel like a kid on Christmas morning. Equal parts comedy, drama and heartache, his inter-squad dynamics always feel natural and real. Whether it’s the hard as nails anti-heroes fawning over an abandoned dog or Deadshot and Harley realising their days of servitude should be over, it’s all done with a panache and verve that simply demands the reader’s attention.

The much heralded Batman cameo certainly doesn’t disappoint. Dishing out several beatings, as only he can, he truly does layeth the smacketh down! A gang of bounty hunters after the Squad? Child’s play. The various members of the Squad themselves? Mere chickenfeed to Mr Wayne. After a deliciously humorous set up from Harley, everybody’s cruising for a bruising. 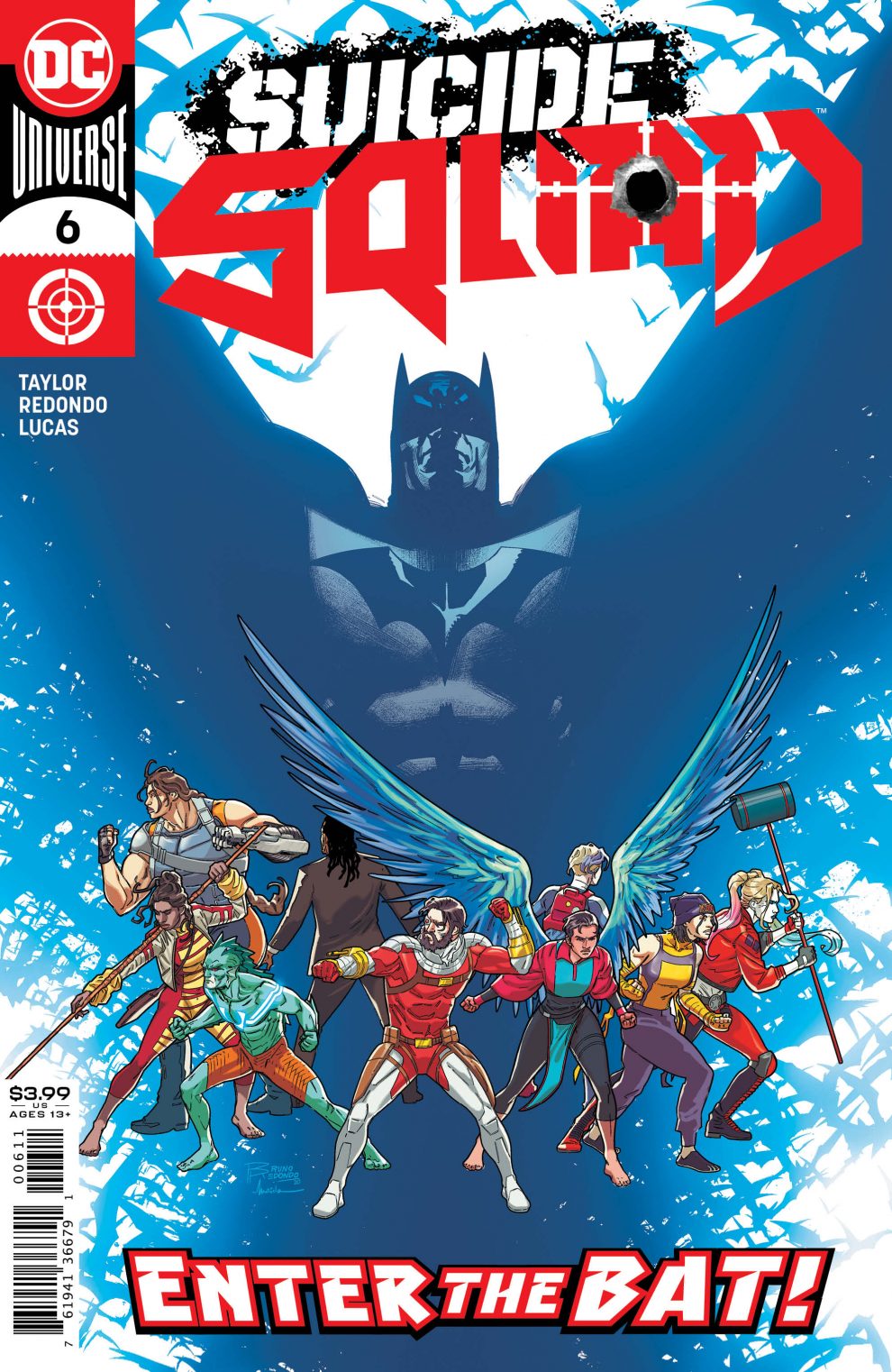 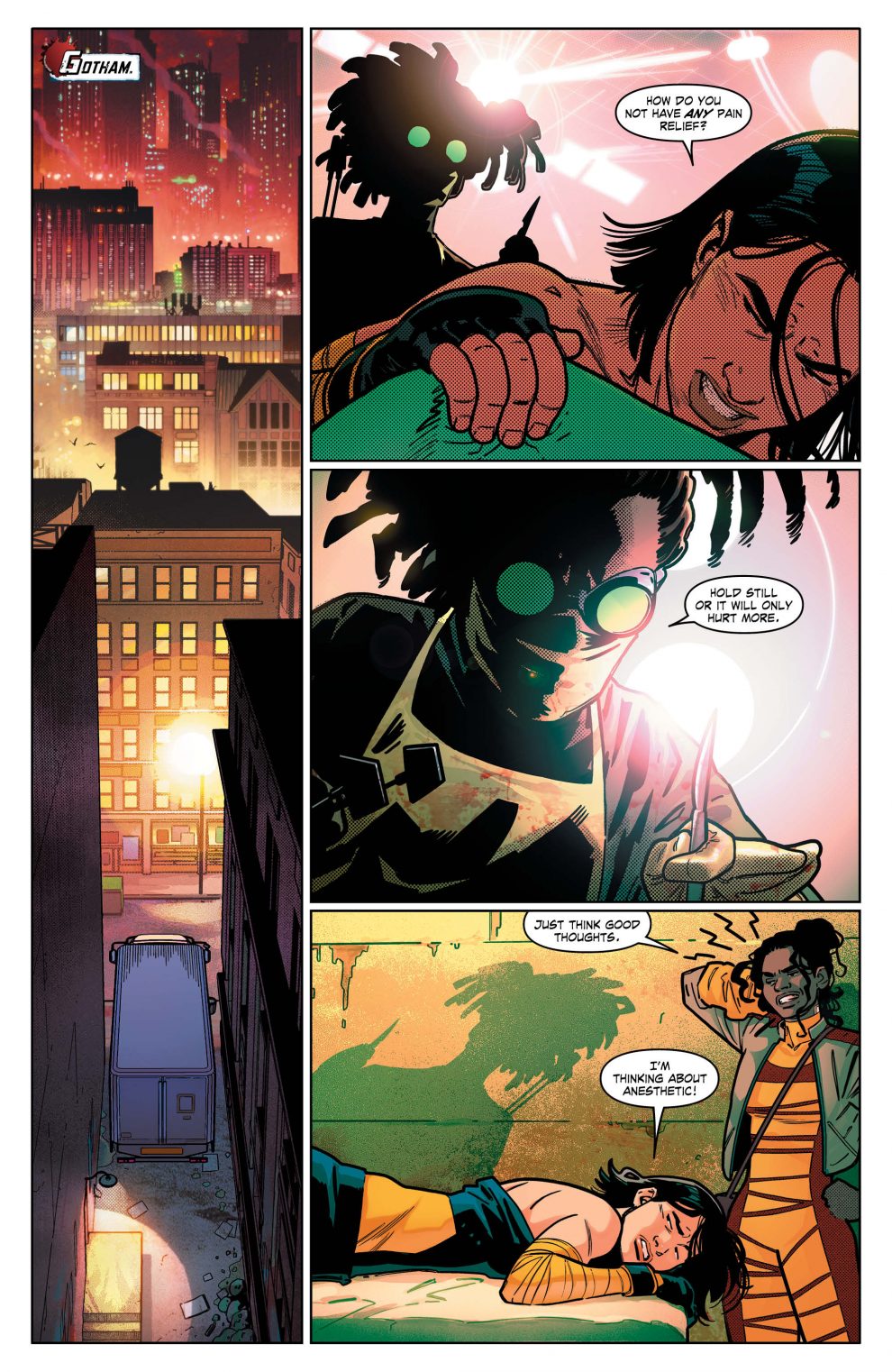 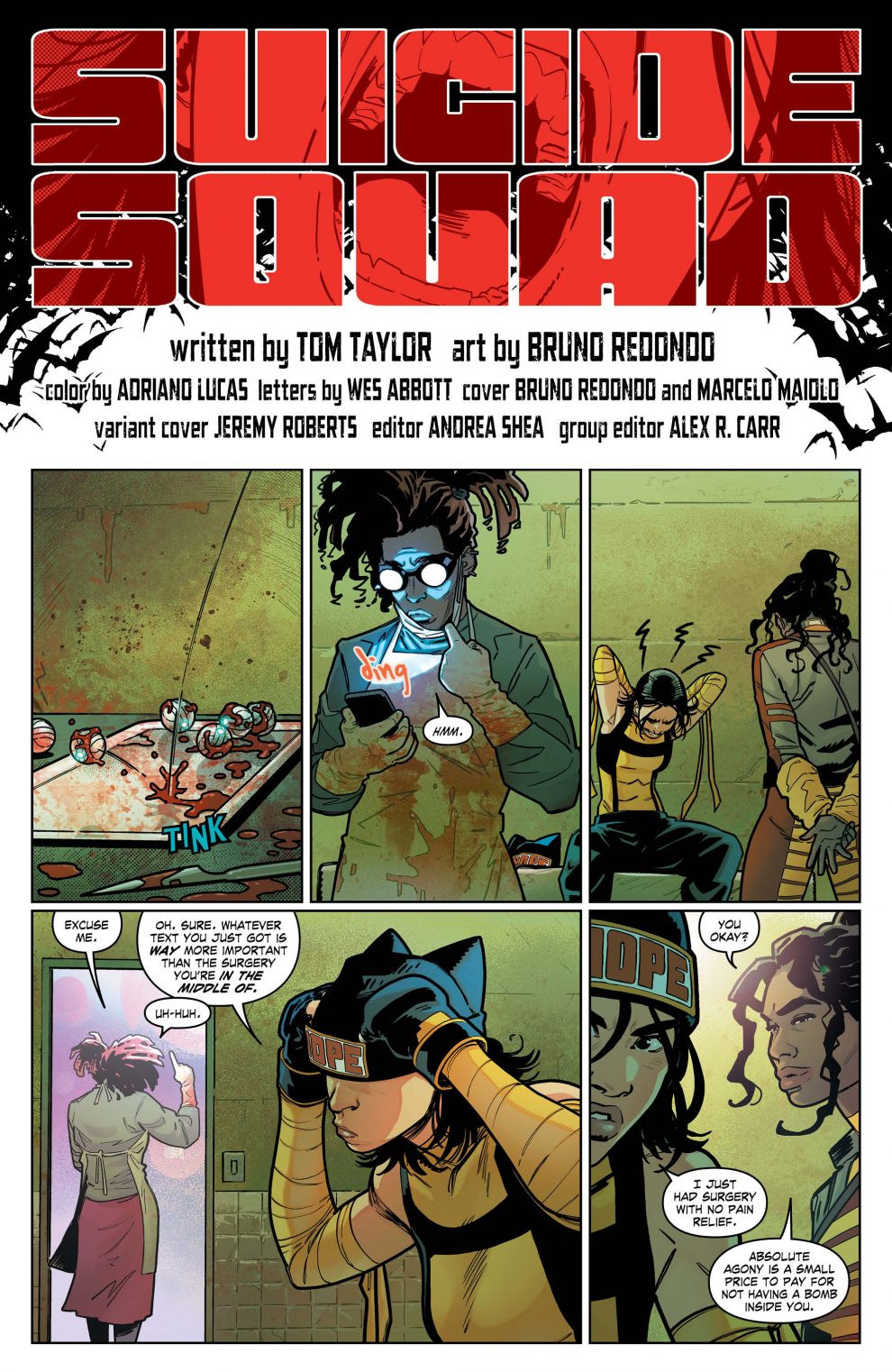 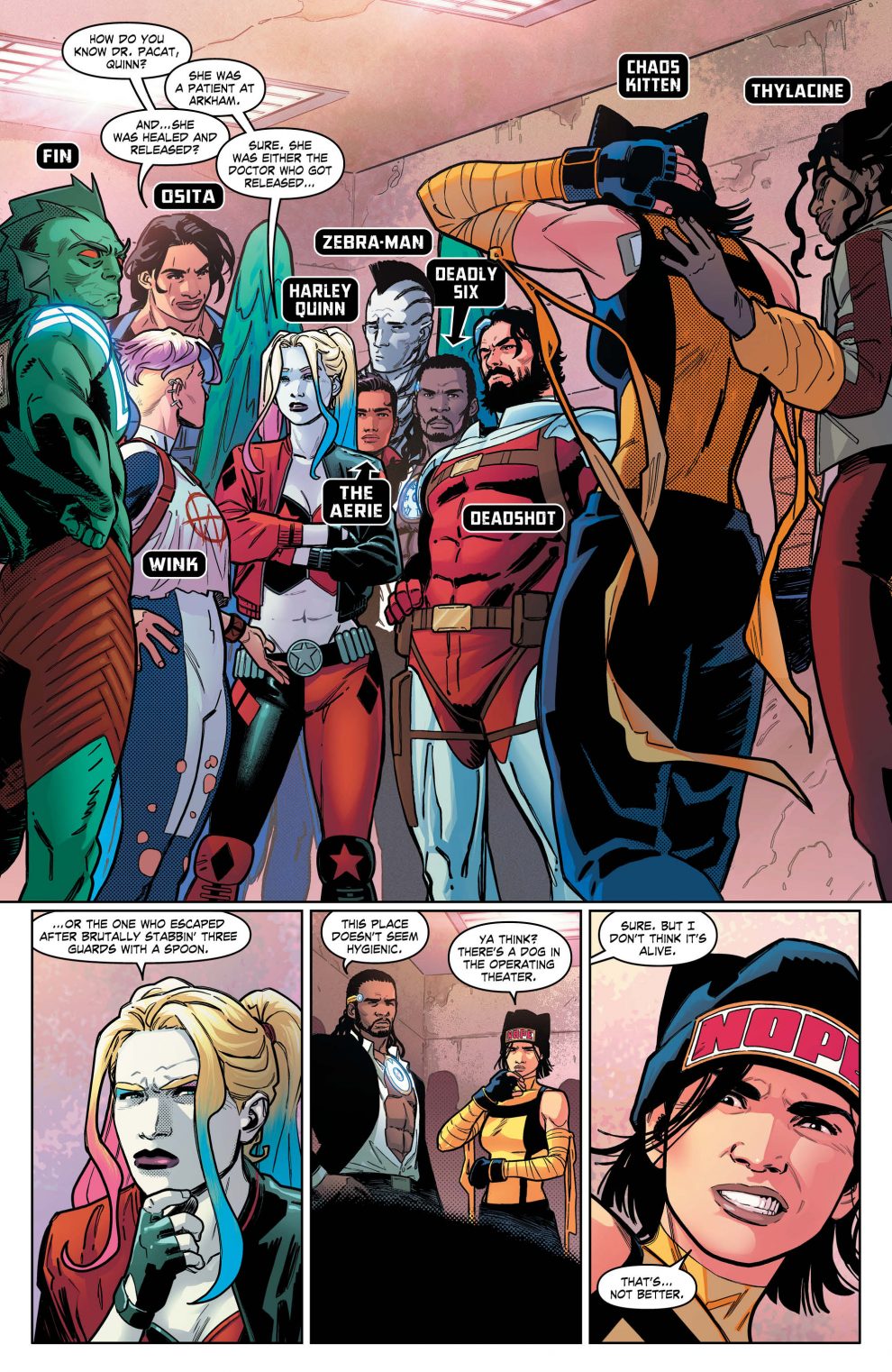 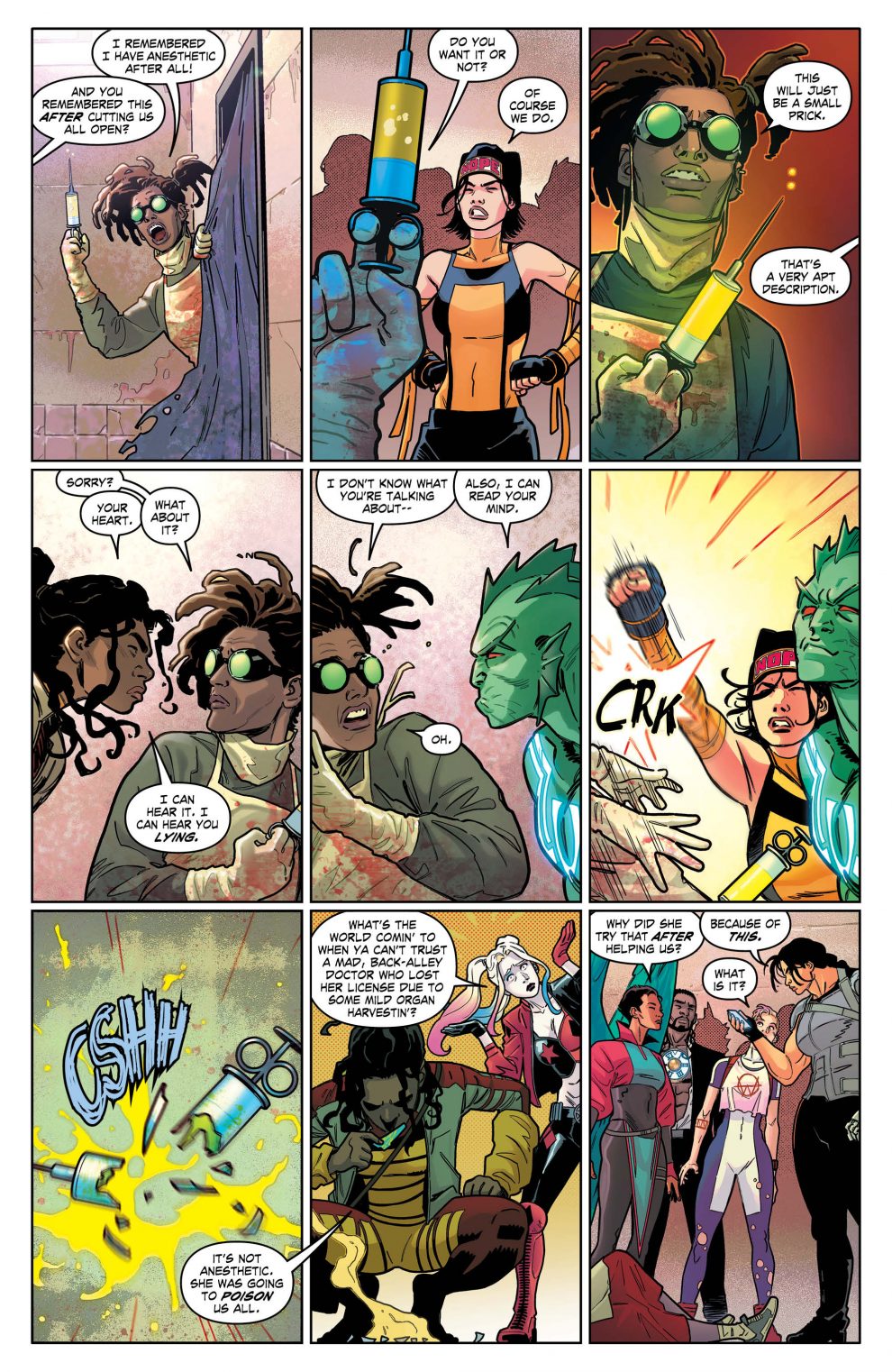 The art from Bruno Redondo here is a joy. In a dialogue free, 9 panel page – in the vein of Moore/Gibbons – Redondo gives us a prime example of the kind of peerless hand to hand fighter Batman truly is. Lest we forget, Task Force X are not to be trifled with, but they’re systematically taken down with ruthless efficiency. The blows truly do leap off the page, with swathes of onomatopoeia accompanying every punch and kick. The speed and skill is wonderfully highlighted by the vibrancy of the artwork.

Saving the best for last, the Lawton/Wayne singles match is, although short-lived, a real treat. To see two such long standing adversaries, still at the peak of their powers, go mano a mano is a comic book fan’s dream. In an extremely hilarious way, the ending to the fight, involving the aforementioned stray dog, is a very clever way to end it. Allowing neither man to be the outright winner, it keeps the powder dry for future encounters when the stakes are going to be much higher.

Suicide Squad #6 is, yet again, a real highlight of the week’s new releases. By way of its bang for your buck ratio, any reader should find this very entertaining. Action packed, hilarious, and dangerous, with an appearance from the flagship character of the DC universe to boot, this has everything this reviewer wants to see, and so much more.

Tom Taylor has taken this veteran title and breathed fresh life into it, pushing it to the top of the tree. It never fails to put a smile on my face and with so much more to come, the ensuing weeks are going to be a golden period for this run. Bravo!