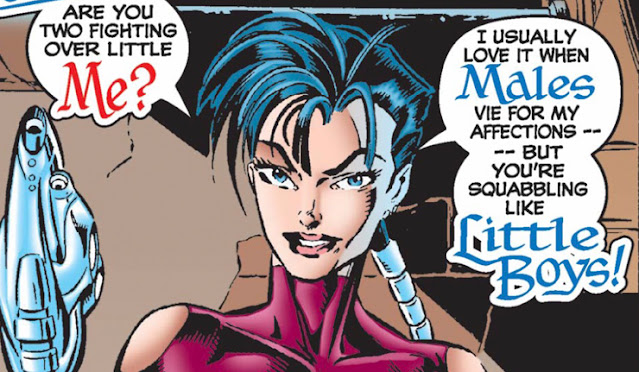 Review by Eric Lee
This latest issue of the Clone Saga introduces a new villain who is a bit of an acquired taste: Delilah.
In general, Spider-Man's rogues gallery is noticeably lacking females. Other than Black Cat- who arguably doesn't count as a villain- there are not many female villains. In other words, we need more women representation.
Delilah does fit that bill. Unfortunately, she's just not that interesting of a character. She is a super strong assassin who has one distinctive, but annoying trait: she emphasizes words really intensely. Like, her words or phrases turn into this lavish calligraphy. It's amusing if we see it once or twice. But Delilah does it every panel she's in. It gets really grating. 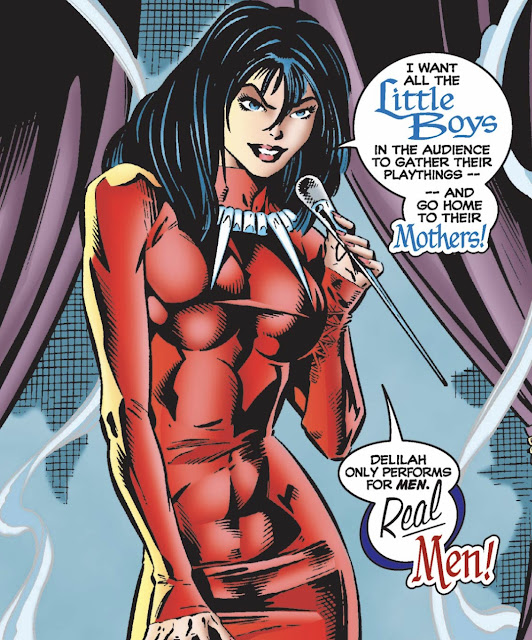 On to the actual plot, after Delilah kills a group of men, she gets her new target: Shirley's ex-husband Garon Lewis.

Garon is super shady and also has a bad relationship with Shirley. When Ben goes to work, Shirley tells him that Garon took her son Devon, but she doesn't trust him. But Ben volunteers to check on Devon and Garon.

What's weird is how Ben reveals in his inner monologue that he actually dislikes Devon, calling him "a mean-spirited, sarcastic punk!" 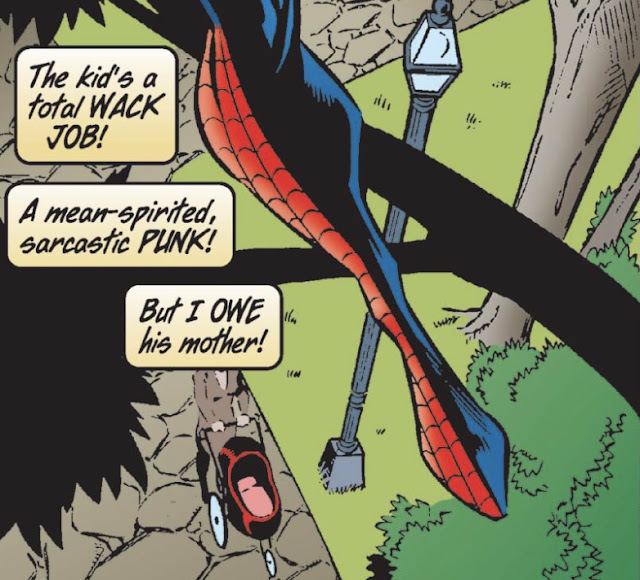 Damn, Ben. That's super harsh. But what makes the whole thing odd is that I've never seen Devon act like that towards Ben.

Devon's always been kinda sassy, but nowhere near how Ben describes him. Either the writers didn't properly build up Devon's personality or Ben is just extremely sensitive.
Anyways, Spider-Man tracks Devon and Garon in the middle of Central Park. Why is Ben dressed as Spider-Man for this? This situation doesn't require superheroics. What's Ben plan here exactly? Confront Garon as Spidey?

But I guess Ben's lucky he dressed in his costume, because Delilah attempts to kill Garon. Delilah and Garon abscond to the sewers where they duke it out with Spider-Man.
However, Devon stupidly runs in the middle of the fire fight and gets captured by Delilah. Fortunately, Delilah doesn't want to really kill Garon, but she just wants to reveal who hired her: Hammerhead! 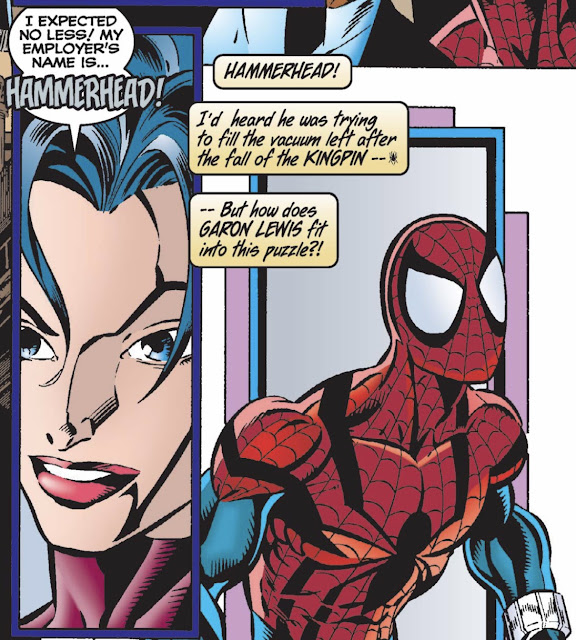 But the twist is that she's really working with a new Rose and is framing Hammerhead so Garon will go after him. What a twist! 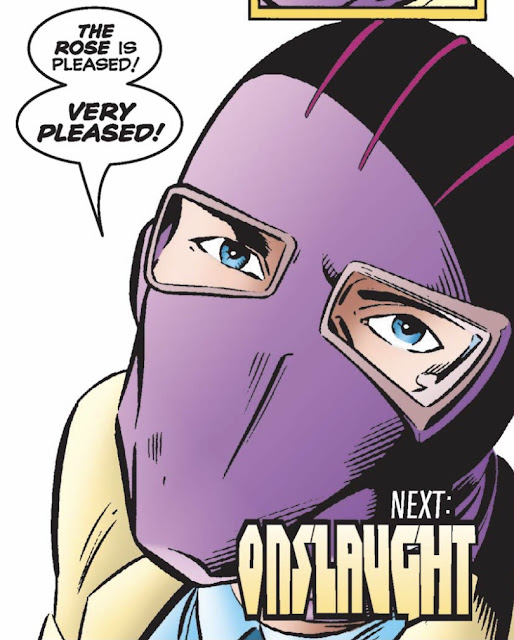 But the whole plan is ridiculous. Delilah originally tried to blow Garon up. Was she expecting to frame Hammerhead after she bombed Garon?

Speaking of Garon, it turns out that he's not a gangster as Spider-Man and everybody else assumed. He's really a police detective working to take down organized crime.
And Garon gives Spider-Man a real dressing down for that.

"You saw a black man with a fat wallet and splashy clothes!" 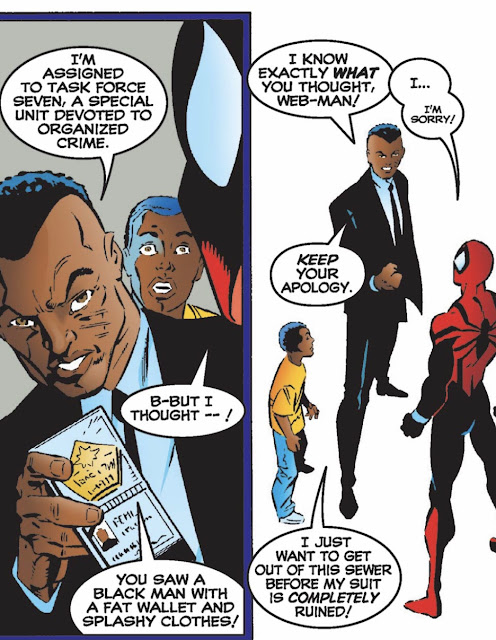 On snap! This is honestly one of the better twists. Tom DeFalco is not always the best at writing people of color without it sounding cringey, but the scene hits it perfectly because of how real it is.

I actually like seeing Spider-Man getting called out for making snap judgements. It's a very typical human problem that we've all experienced.

It reminds me of a joke in Into the Spider-Verse. In one scene, Miles Morales corrects Peter's assumption that a scientist is a man and Peter quickly quips back, "Cool! Step 3: I re-examine my personal bias!"

Elsewhere at the Daily Bugle, Robbie Robertson knocks down J. Jonah Jameson's office door down and reveals the office is trashed. Uh oh. Jameson's in trouble! 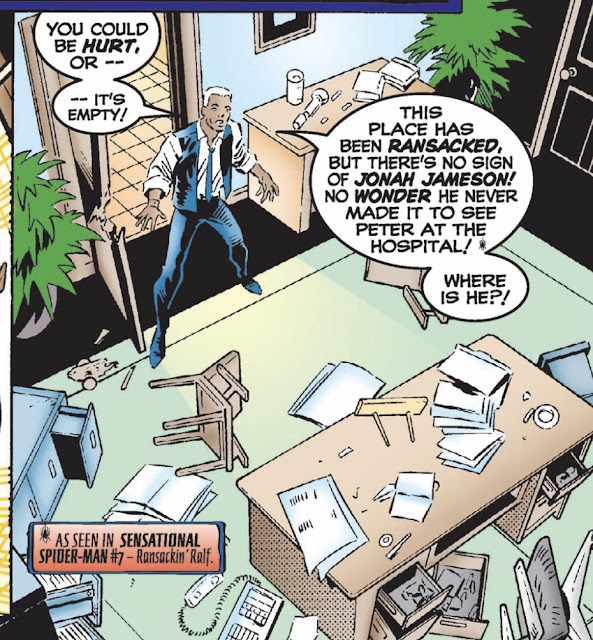 Also, there is a passing robbery where the guards are tied up with the Ringer's rings. Except the Ringer died years ago. Hm... First the Shocker, next the Ringer...

Lets tally up to see what the Clone Saga has done so far:
Notable Developments:

This issue is really all over the place. Some stuff is really good, like the subplot with Garon. But some of it is really bad, like Delilah's plan to frame Hammerhead is downright illogical.

Also, Delilah is a little too... niche for my tastes? The lavish fonts used when she emphasizes words is too silly, and it happens every time she talks! I don't even know how I'm supposed to read that?

On the bright side, it does progress a couple of interesting subplots, so there's that.