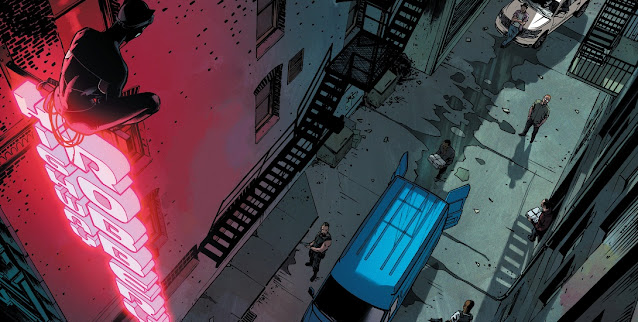 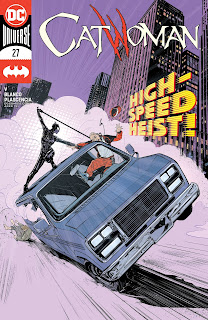 We see Selina making good on her promises in Catwoman #27, after last issue’s big shake up. The previous issue gave us some immense context, and showed us the realistically dingy aesthetic of the lovingly named, Alleytown. Now we see everything Selina’s built, and her extensive criminal experience, used masterfully. It’s a real vision of the underworld of Gotham, with all the the corrupt cops and betrayals to boot.

The angles Fernando Blanco uses to tell the dynamic parts of the story are at their very best in this issue. We get the high shots, looking down at the scene, really giving us the scope of the city. It feels like we’re watching the action from the rooftops, much like Catwoman would. Then you get in amongst the action, making the chaos of a fight or daylight robbery all the more in your face. 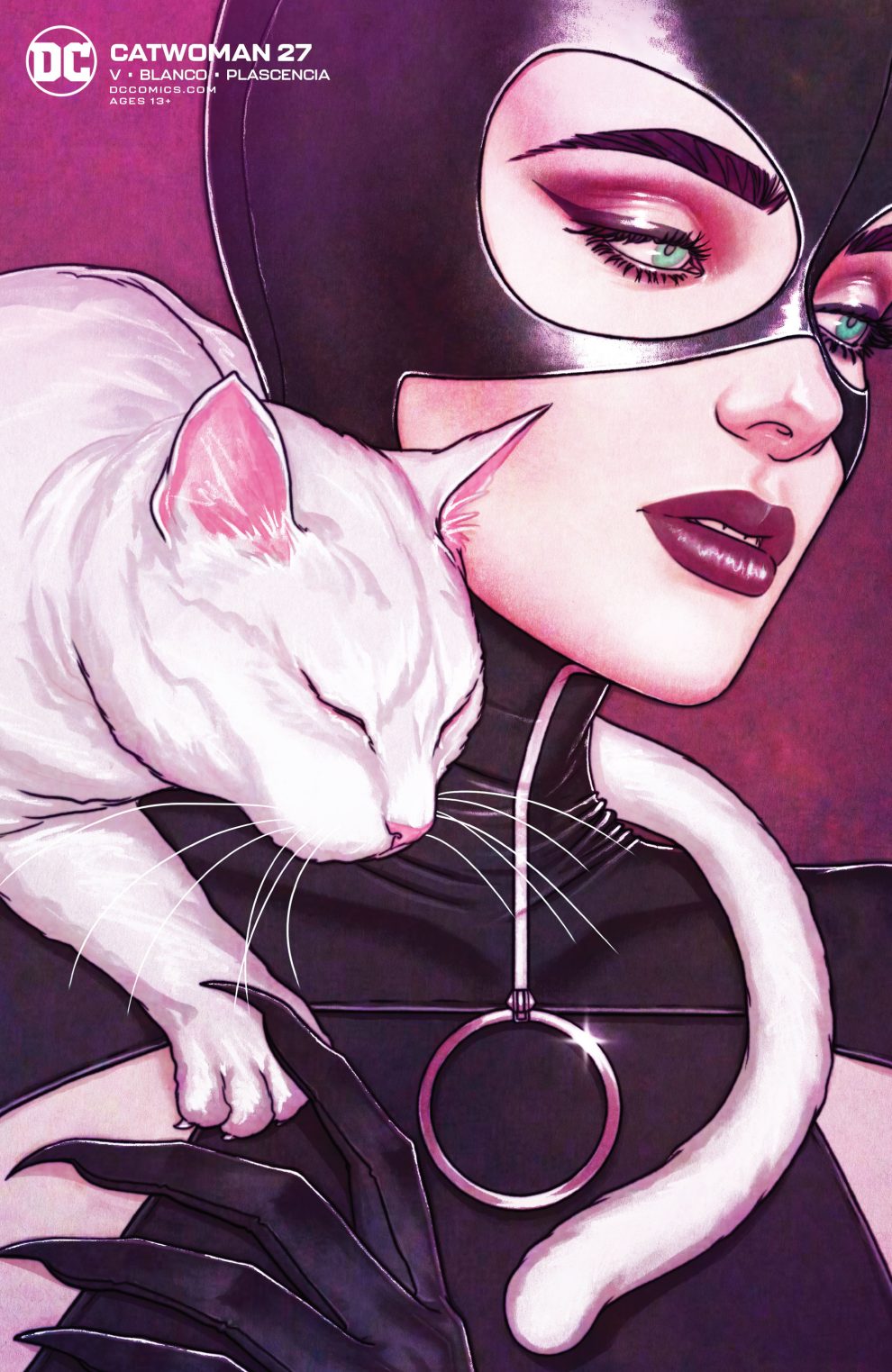 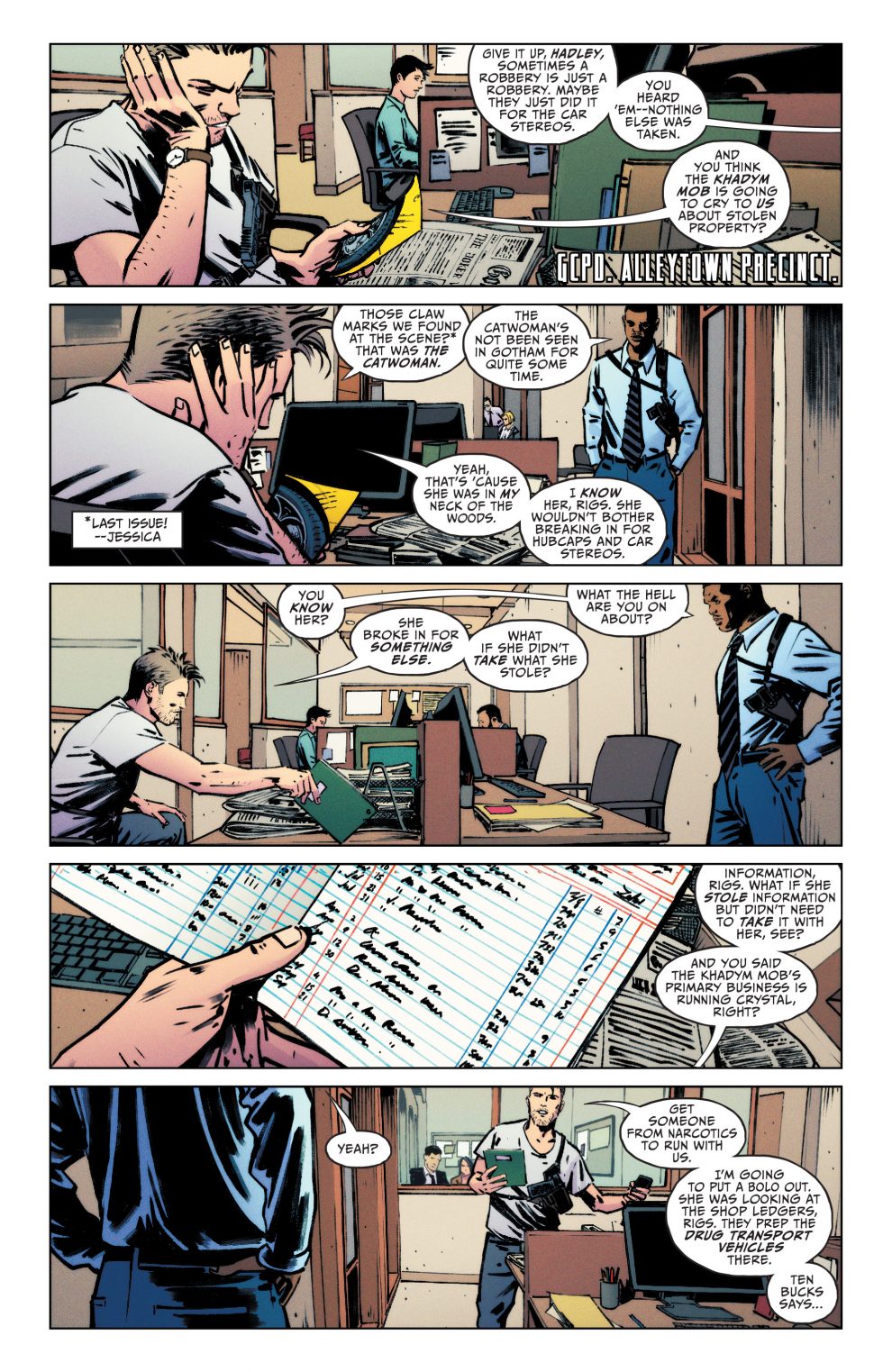 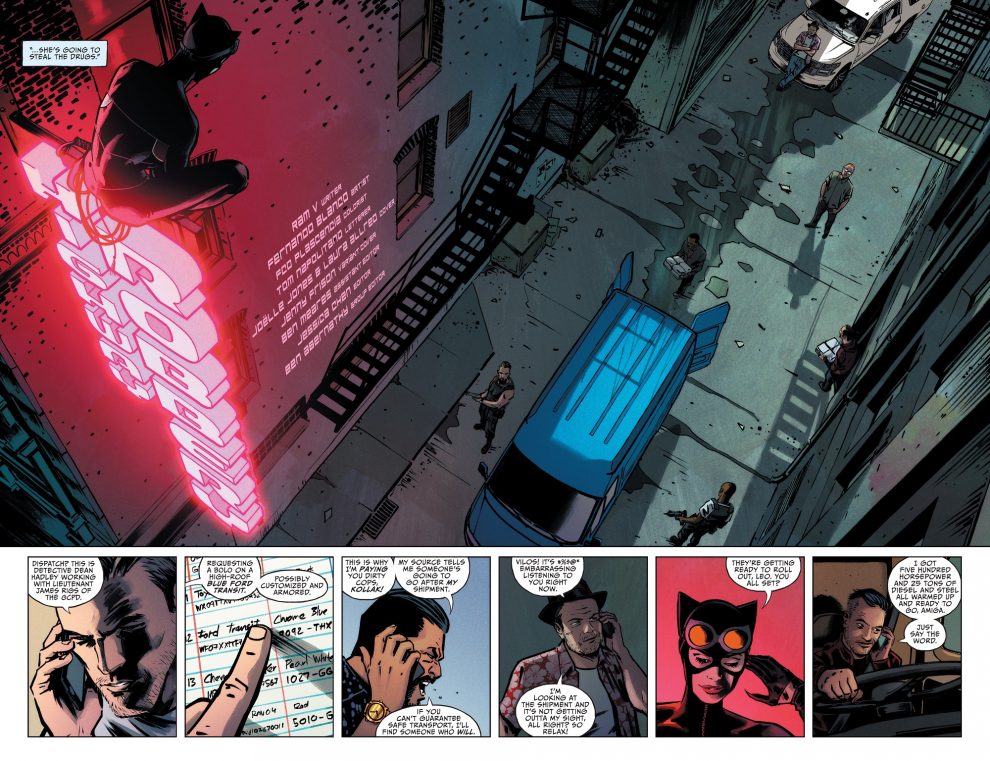 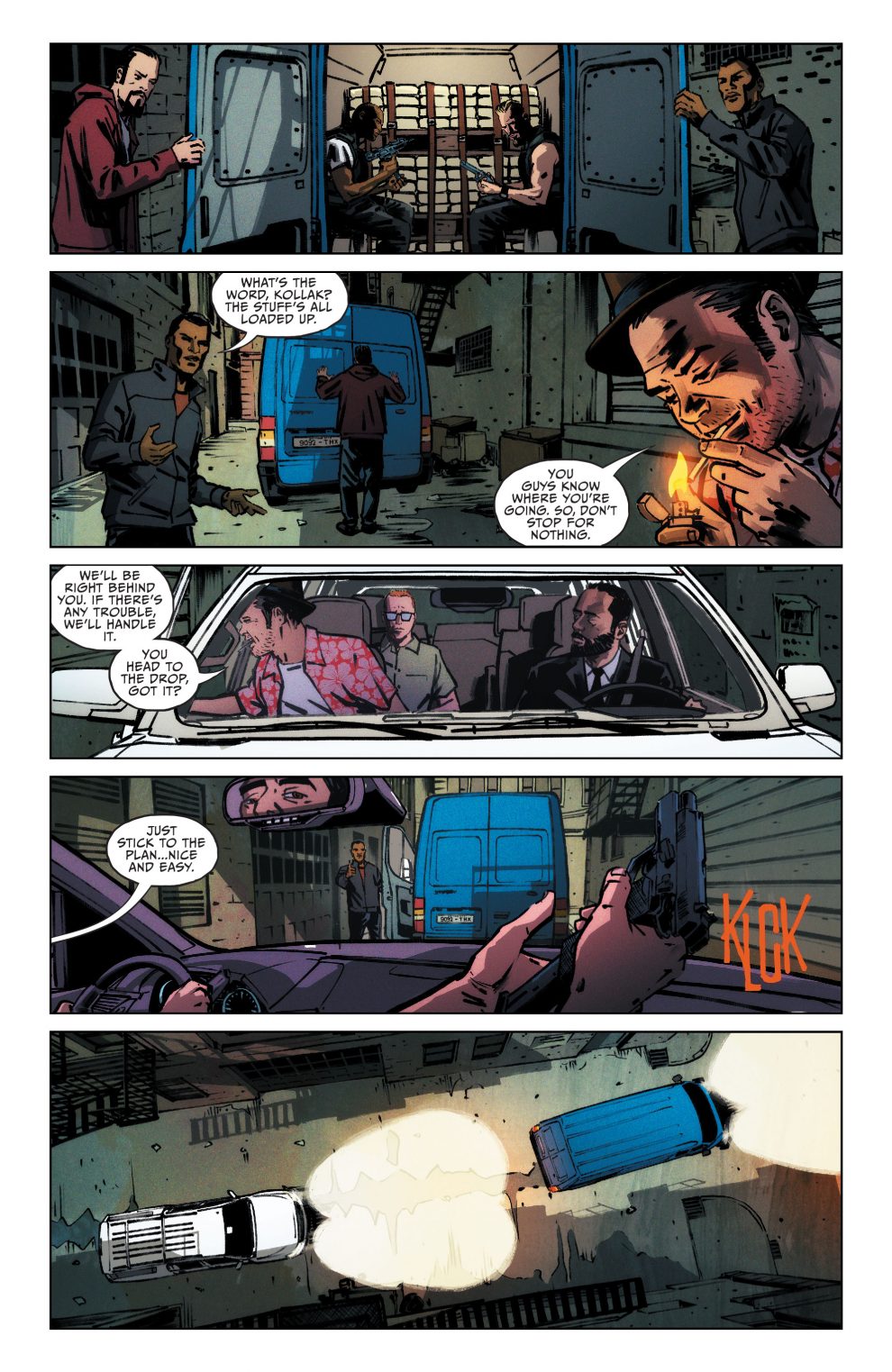 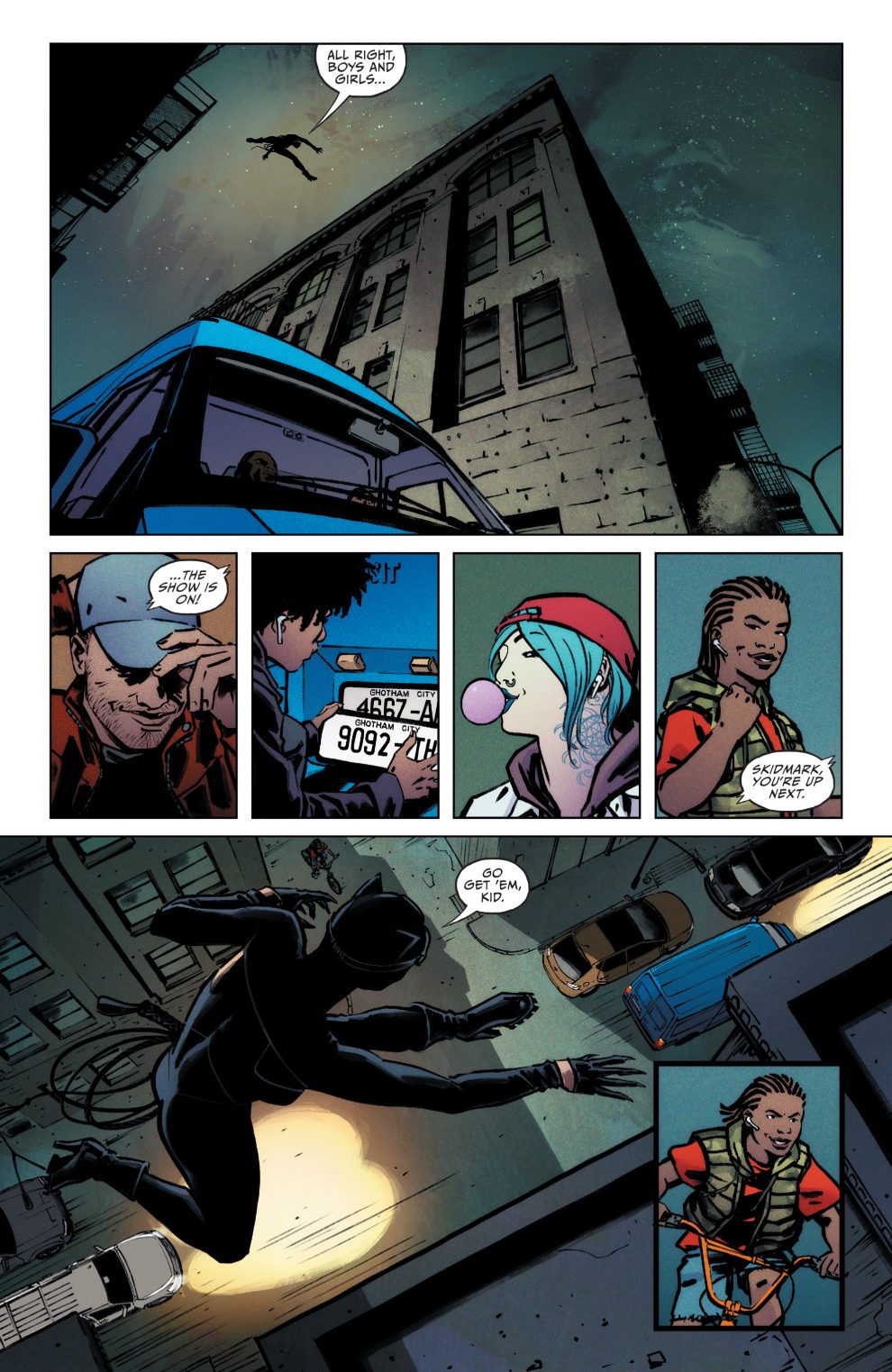 There’s also a moment when a certain powder gets kicked up in the air, like a gas attack. It must have been such an interesting challenge for FCO Plascencia to color the slight gradient of yellowy whites to the clouds dominating the page. It made for an interesting, formless landscape for Catwoman and the others to fight in.

It’s obviously ironic for Catwoman to be chased in a thrilling game of cat and mouse. Without her realising, she plays both the hunter and the hunted in Catwoman #27. Being influential means being a target, and there are many who seem to be coming for her. This tone is very reminiscent of a tried and true urban crime thriller, and fits that bill, but it’s still better realised and better to look at than most I’ve seen.

Pitting the greatest thief in DC comics against truly devious people, and a fascinating killer lurking in the shadows, feels inescapably gripping.