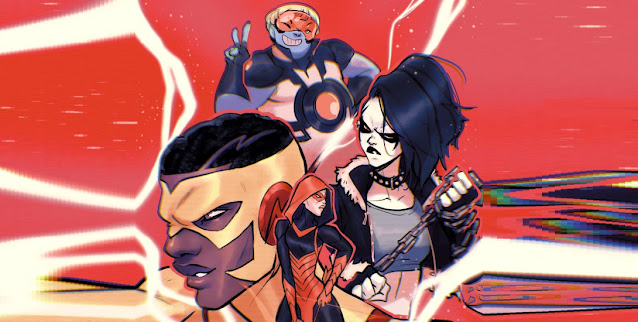 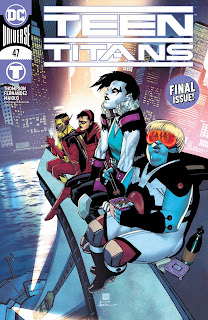 It’s the end of an era, the end of this title, and the final story featuring this particular group of heroes. Yes folks, sadly Teen Titans #47 brings to an end a stellar run of terrific stories, featuring top level writers, artists, and a wonderful, and real, group of teenage super-folk.

However, worry not! If this issue proves one thing, it’s that every ending can lead to new beginnings.

It seems like my final Teen Titans review is going to read a lot like most of my other evaluations of this wonderful title. Robbie Thompson has (joyously) proven me wrong, by wrapping up this chapter of the team’s history in a neat little bow. What I didn’t expect was an ending so open, and so pregnant with promise. Like I said, this is but the close of a chapter, as things will soon be heating up… even though it looks like DC Comics are approaching an Endless Winter.

Highlights include a war between Red Arrow, Kid-Flash and the rest of the team (the resolution of which blew my mind, and made my heart skip a beat), the surprise appearance of some Titanic guest stars, and wonderful character moments between the young heroes, all of whom I have truly grown to love over the last couple of years.

Robbie Thompson had the horrible, and unenviable task of concluding a run that featured someone else’s characters, ideas, and plot threads. He’s admirably managed to do that, and still inject his own character, personality and imagination into the book. I will now unequivocally state that I’ll be happy to pick up any books I see, moving forward, with Robbie Thompson’s name on them.

It’s no secret that I’m a huge fan of Javier Fernandez’s art. I will say though, there were a couple of instances at the beginning of the issue where I found it a little rushed, or not quite as polished as his work usually is. I also felt that Emiko and Wallace’s warped, enraged faces, whilst under Joystick’s control, were a little too grotesque. Having said that, perhaps that was the point? The artist merely wanted to highlight just how out of character these two heroes are behaving, and how grossly opposed these hateful, violent emotions are to these characters’ true feelings toward one another, and their team-mates? Whatever the case, the gripe’s a minor one, as the action, the kinetic energy and storytelling Javi provides throughout the rest of the issue, are all excellent.

As always. Marcelo Maiolo’s color art and Rob Leigh’s lettering are beyond reproach. These two artists rank amongst my favorite talents in their respective fields. I always sing their praises, and will continue to do so for as long as they keep delivering the goods. What am I talking about? Look at the figures in the window, in comparison to those climbing the outside of the building, and the glimmer and sheen of Roundhouse’s belt buckle. Then take in the way the lettering helps the flow of the art, helping the reader follow the story, and enjoy the visuals, all at the same time.

Teen Titans #47 is about as good as a final issue of a series can get. Sadly, 2020 saw some of my favourite series end, and another is about to next month. The one plus is, whilst those other books seem to have real closure, and we’re not 100% sure when or where we’ll be seeing those characters again, the end of this issue is far more hopeful. Grab your coats, hats and scarves folks. We’re leaving the warm hearth of Teen Titans as we knew it, and heading into the cold outdoors. After all, what happens when adolescents grow up, and can no longer be seen as such? That’s when the teens, grow into Titans.

I’m someone who loves the sun, and hates colder climates… but, for once, I’m actually looking forward to an Endless Winter.