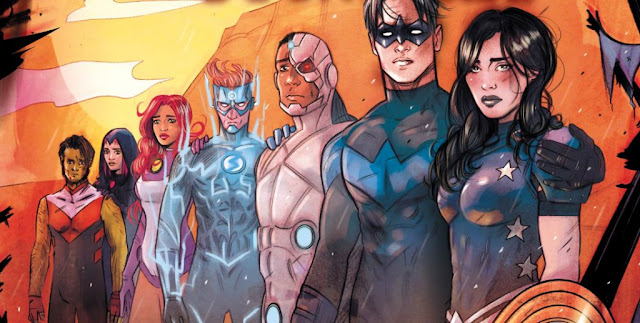 "The Last Stories Of The DC Universe" 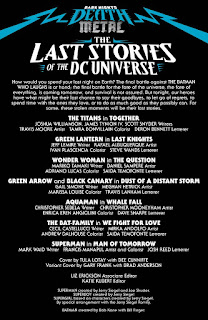 Dark Nights: Death Metal – The Last Stories Of The DC Universe. The title alone is powerful, but the stories contained within this terrific anthology more than do the name justice.

The opening story, written by the three comic-book heavyweights of the moment, and drawn by an artist I cannot get enough of, delivers honest to goodness quality. I’m a huge Teen Titans fan, and seeing the wealth of characters presented here brilliantly written, and exquisitely drawn, made me very, very happy.

The Green Lantern story blew me away. Hal Jordan and Sinestro are two legendary characters, and their interaction in this short took me back to some of my favorite GL tales from the 80s and 90s. I remember the destruction of Coast City and Hal’s descent into Parallax fueled madness, so this little character piece really touched me.

Seeing Wonder Woman and Donna Toy together again also brought a nostalgia tinted smile to my face. I know that many new readers won’t get the same feelings, but they’ll still get to read a great meeting between two of the most powerful, noble, and inspirational female characters in all of comics, as they prepare for war. Daniel Sampere’s a fantastic artist, and this chapter fits brilliantly with the wonderful first tale from this book, as drawn by the insanely talented Travis Moore.

“Dust Of A Distant Storm”

This comic could’ve been made specifically for me, as the fourth story stars my second favorite comics couple, Green Arrow and Black Canary. Damn, this one brought an actual tear to my eye. While the art was light and cartoony, the story had humor, heart, and was just beautiful. I really, really want to see Black Arrow again. The final page made me smile, and broke my heart at the same time. Brilliant. 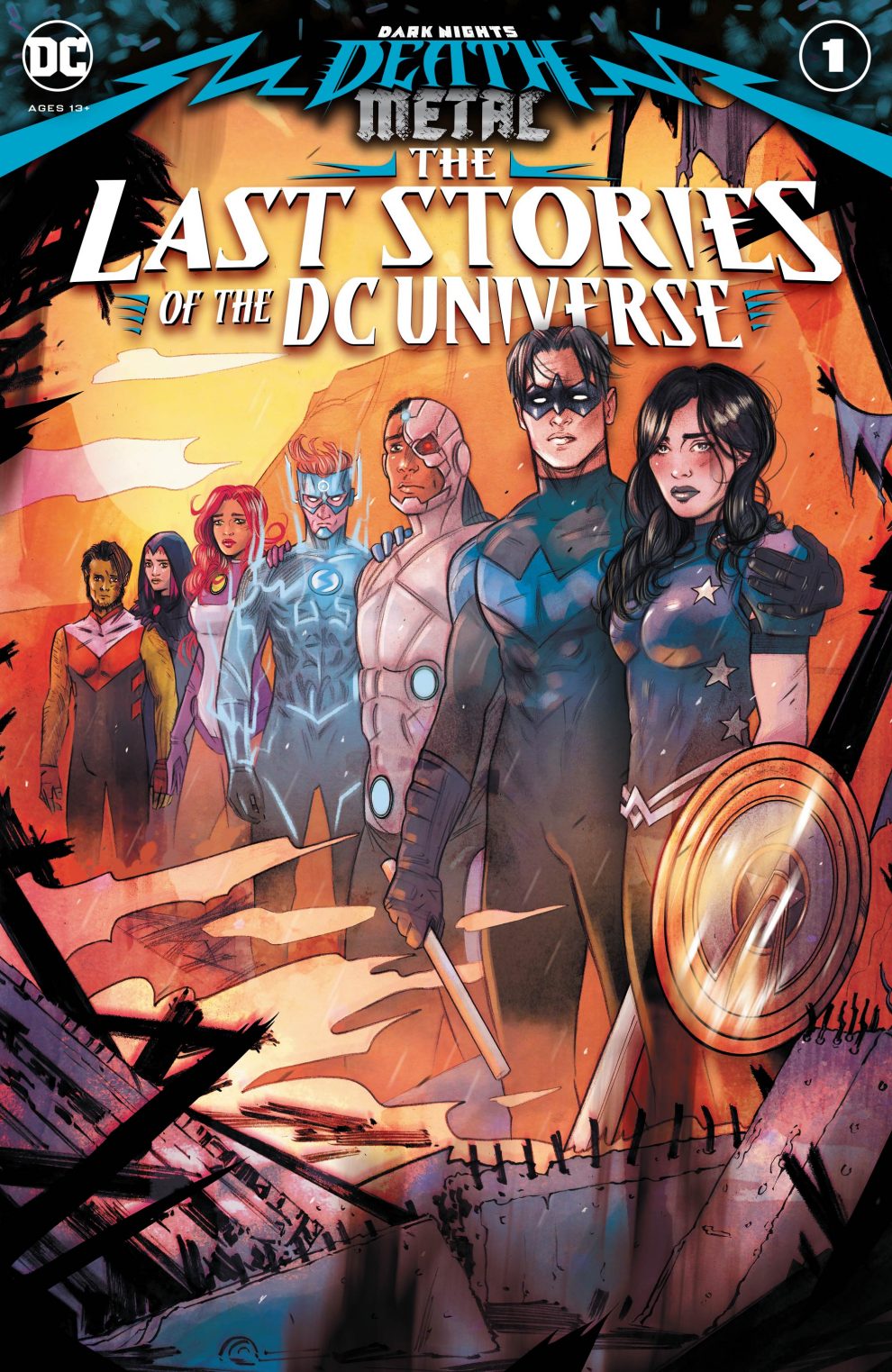 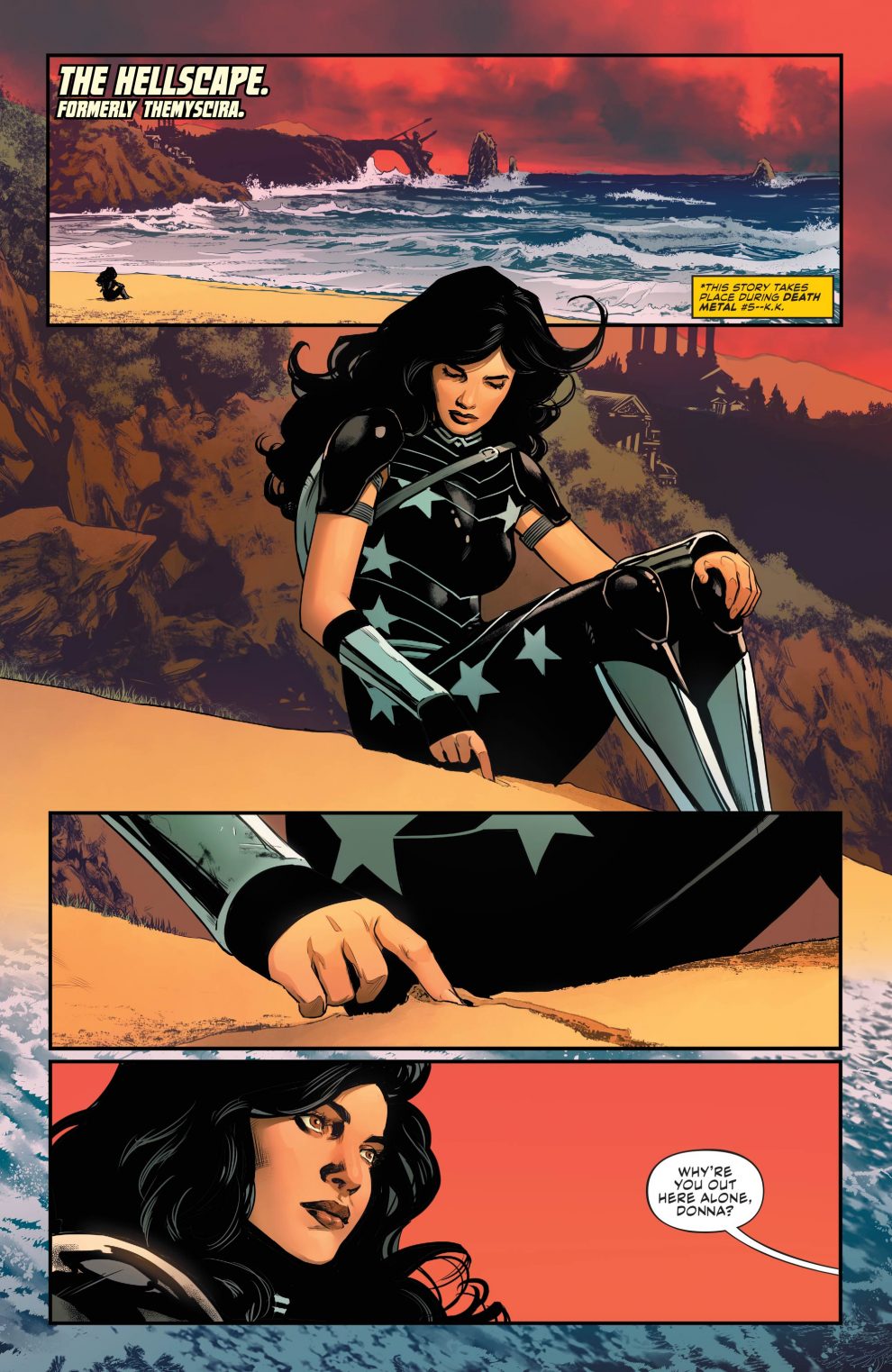 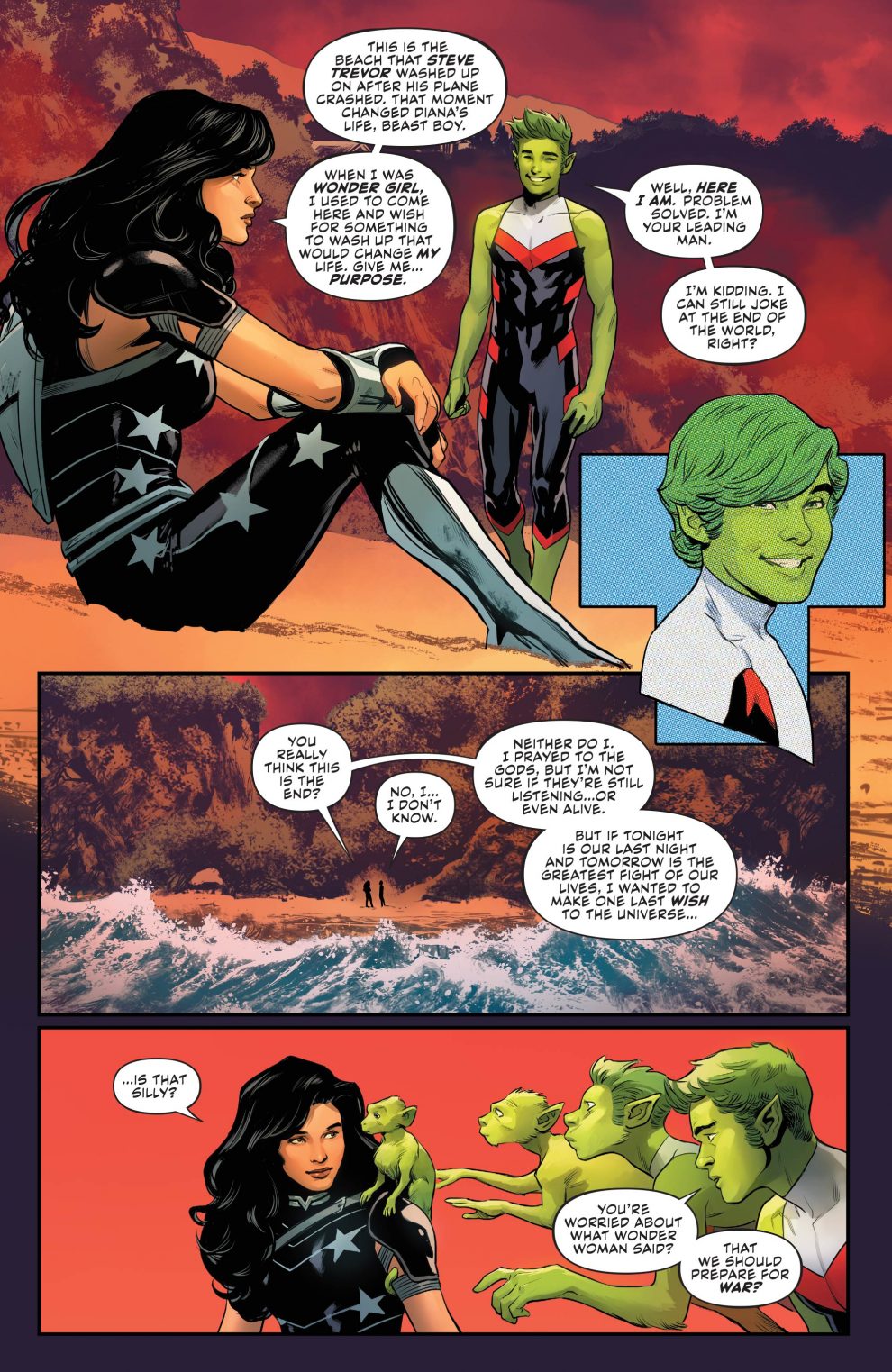 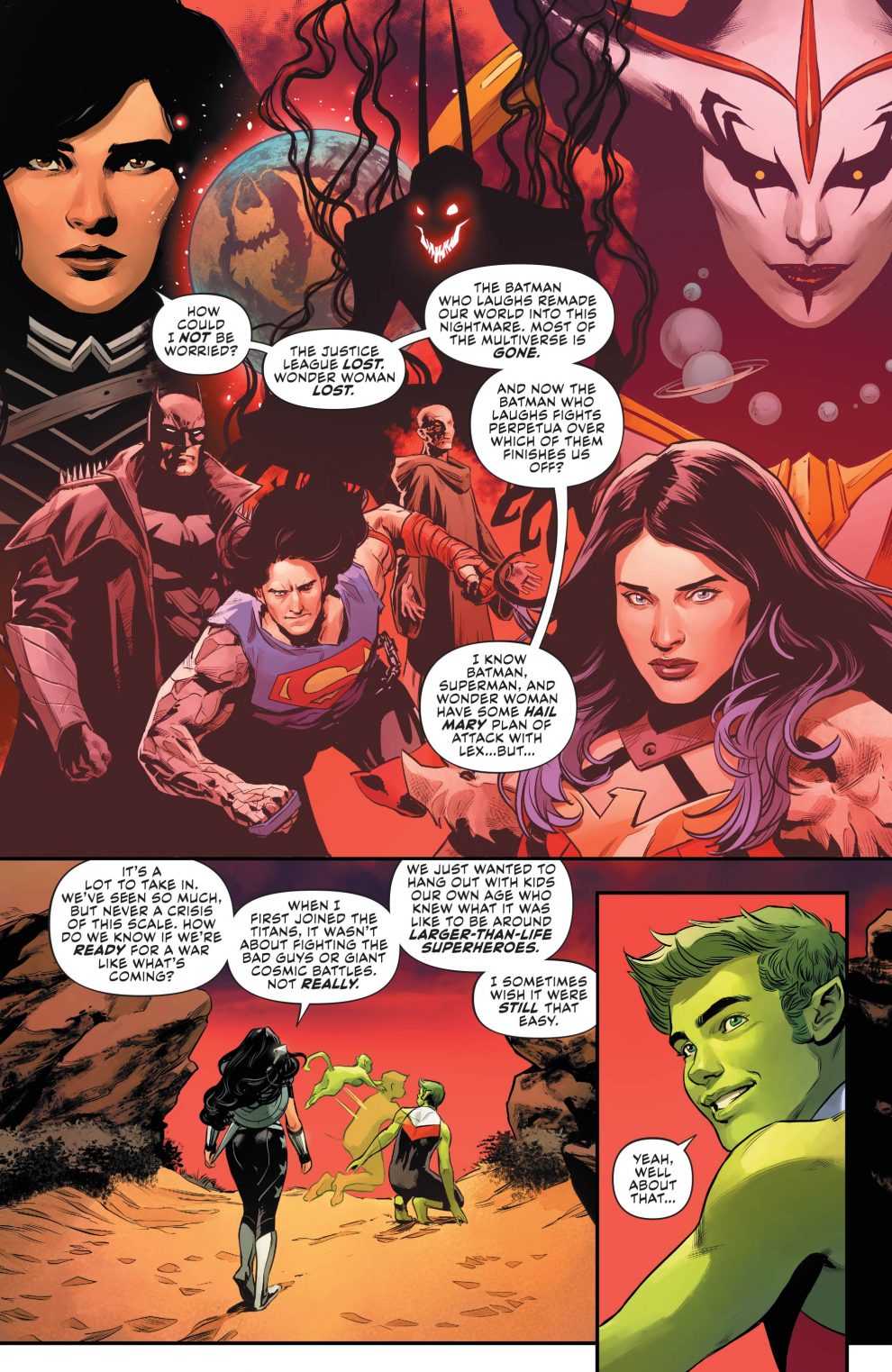 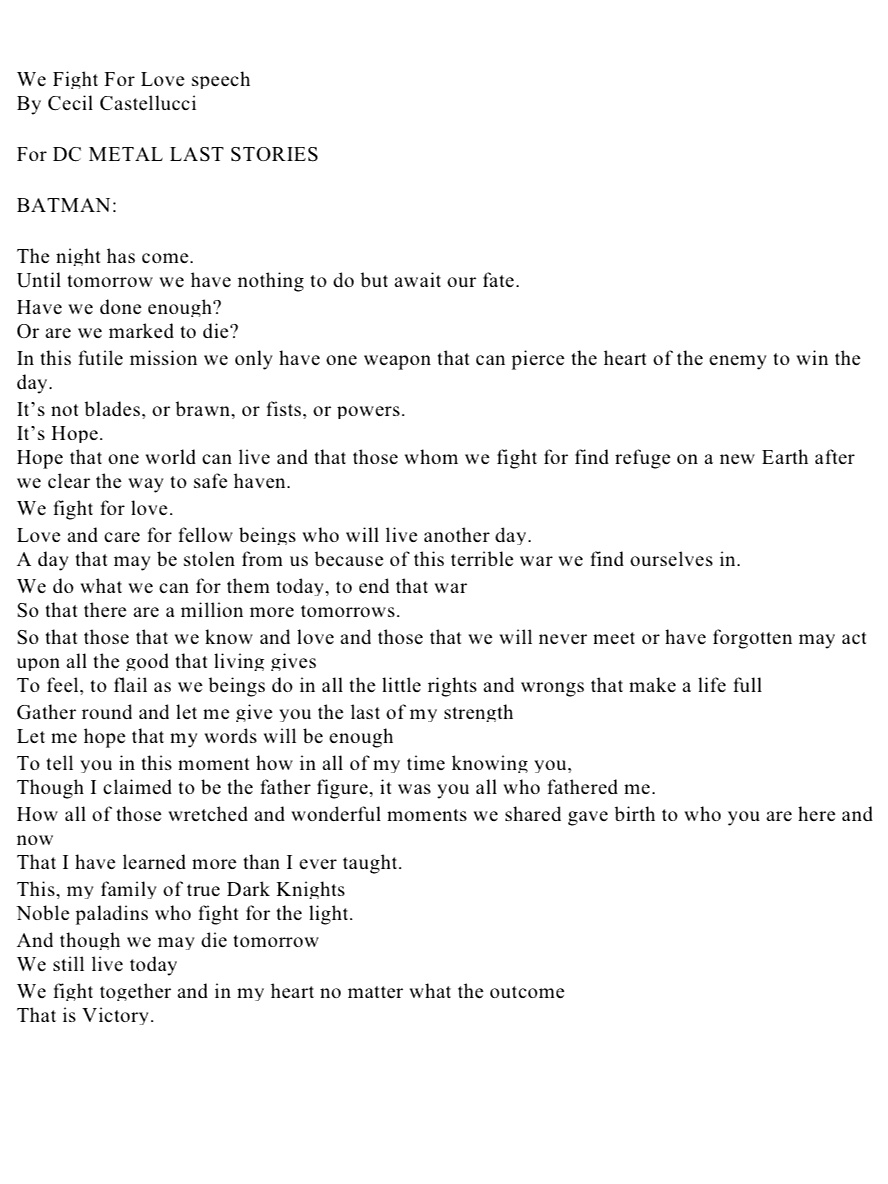 This story made me want an Aquaman series written by Chris Sebela and drawn by Chris Mooneyham. This tale was pure poetry, presented with storybook art, and I loved it. Where is evil in the cycle of life and death? Are those who are parents not truly immortal? If the end comes, then those with a legacy will not have given their lives in vain. Comics that can entertain, and make us think. Four color philosophy… who’d a thunk it?

“We Fight For Love”

When the DC Comics News gang and I interviewed Cecil Castellucci a few months back she mentioned this story. Let me state for the record that I love Cecil as a writer, and what she does in this story is pure magic. She really put Barbara Gordon through the wringer in the final issues of Batgirl, and everyone knows that Nightwing has had a rough couple of years too. This story was a masterpiece, and more emotionally engaging than I could ever have imagined. Batman’s monologue is incredible! If you love the bat-family, then this story will grab you by the feels like no other. Awesome. Mirka Andolfo’s art is the icing on the cake.

Just when you thought the heartache and gut punches couldn’t get any stronger, we get Superman being the most Supermannish he’s ever been. Damn you, Mark Waid… you legend, you. This is love, not just for Jon and Lois, but for humanity. Forget truth and Justice, forget supervillains; Superman is, first and foremost, inspirational. He’s the best of us, the best of all heroes, and a shining beacon of hope. What would you do if you only had one hour? Superman shows us.

The first story “Together” resumes as a framing sequence for the other tales in Dark Nights: Death Metal – The Last Stories Of The DC Universe and bookends the issue spectacularly. I’ve said over the last few months that the Death Metal series has been bonkers, fun, and action packed, but this issue has grounded the insanity, enhanced the thrills, and given everything meaning. Never have our heroes seemed more heroic, and never has an anthology entertained in a more thought-provoking fashion.

This could be my favorite single issue of 2020.