Into the Jaws of Death - Legends of Runeterra Spoilers 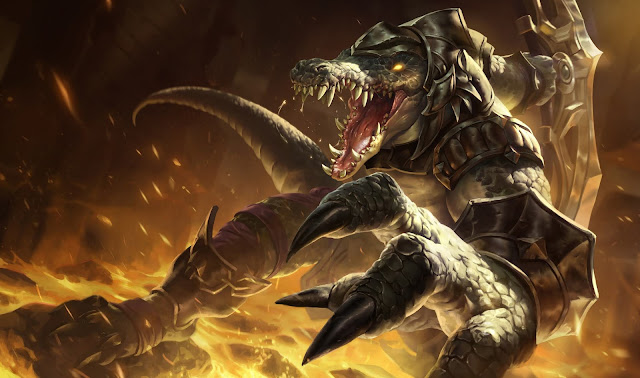 Players in my new favourite card game have just won an all-expenses paid trip to the desert sands of Shurima. The new region, and a plethora of cards all hit the digital, collectible card game on March 3rd. In the spirit of Offler and Sebek, we see our first Shurima Champion in Renekton, and a wide comment on the mechanics in the set. 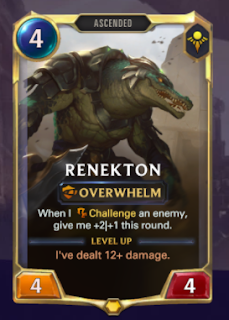 The 4/4 for 4 and new Ascended type are all to be expected, and Overwhelm is very welcome on this middle-curve Champion. Himself dealing 12 damage keeps his design flexible and interesting, and intending to be on the consistent offensive. The stat boost when he Challenges is interesting - perhaps a way to give him Challenger, perhaps Confront or Sonic Wave. Pairing him with Demacia for Single Combat or Targon for healing would be the most efficient way to level this beat stick. 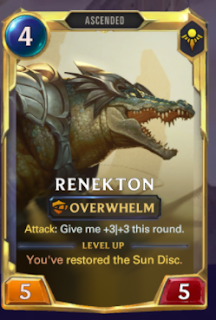 The leveled version reads like a distinctly more aggressive Shyvanna, with the combat boost to make him effectively a 4 mana 8/8. Stats alone do not win games of Runeterra, but this comes close. Matching Captain Farron on the battlefield can win games and he can bring immense pressure. Until they Vengeance him. But wait, he can level up again? 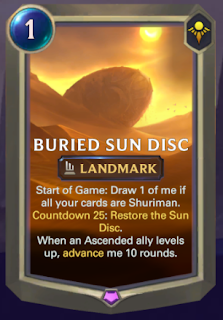 The Sun Disc is a new Landmark that speeds up the clock on the lost civilisation of Shurima's restoration. You have a hypothetical 25 rounds to count down this thing, but there are many ways to speed up the clock. Once the great Sun Disc is in the sky, Shurima is restored, and these Ascended Champions truly gain their power.

Renekton, a 4 mana 10/10 with Overwhelm, that does two to their team and face before combat damage is dealt is positively terrifying. The attack or block trigger paired with Kegs or Funsmith. 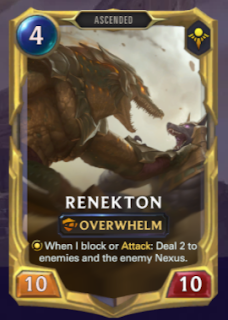 Realistically speaking, I don't know how willingly all-in a Renekton deck would need to be on getting him to Level 3. They'd need to be on Mono-Shurima to see Sun Disc consistently, somehow protect it from the Scorched Earth and Aftershock effects of the world, and play a regular game of Runeterra with only 5 unit slots instead of 6, while Fizz/Twisted Fate runs you over with Elusives. I'd love if this archetype were powerful, but it requires finesse to pilot. 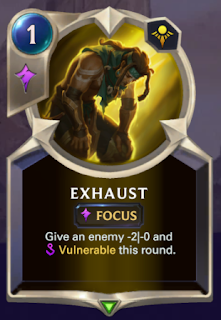 The other big announcement alongside Renekton was the new-ish spell keyword. We've been playing with Focus spells for a long while, now the fourth kind after Fast, Slow, and Burst. Focus spells can be cast at any time without passing priority BUT can't be cast in combat or in response to another spell. Sound familiar? I imagine with this new spell type, Riven's fragments, Lulu's Help Pix and Gems will all get this tweak to be this new spell type, but it's nice to see this level of care and attention.

The new cards may leave old strategies and ways of playing, buried and burned in the sand. It's always exciting to see something new and I cannot wait to shuffle up Shurima cards in Legends of Runeterra from March 3. As more cards get released, look no further than Fantastic Universes for comments on the new Champions as we see them.