Review: Harley Quinn and The Birds Of Prey #4 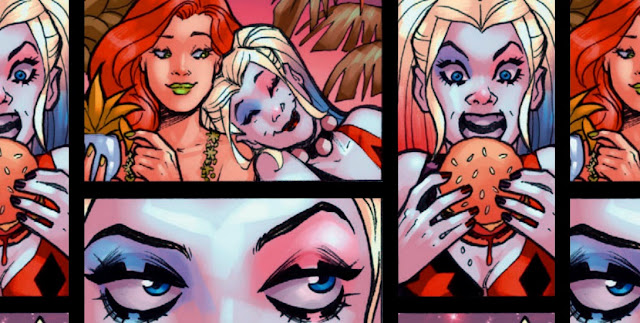 “Harley Quinn and The Birds Of Prey” – Book Four 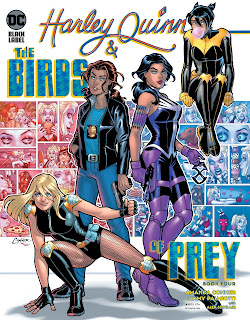 If there was ever a perfect ending to any story, then Harley Quinn and The Birds Of Prey #4 is it… hands down!

In my last review, things ended with a $20 million bounty on Harley’s head, payable to whoever brought her to the Joker. Many of Gotham’s villains, and even Defoe’s henchmen have started the hunt, while Harley deals with her own personal disaster.

Let’s dive into the chaos!

I Can Be Stabby!

Landing right back into the middle of a war zone the well known villains of Gotham are taking on the Birds Of Prey and Red Tool. In the mean time, Harley’s dealing with her Ex-puddin’ and Harley Sinn; with Ivy’s life in the balance. All cards are on the table, and this is the encounter that Harley’s been waiting for. Sinn quickly learns that this whole gambit was never about her, even in the slightest.

The history between Harley and Joker is all out there, and has come to a head. The Birds of Prey are on their way to assist but when Harley’s putting everything on the line against the Crown Prince of Crime… will they arrive in time to be of any help? 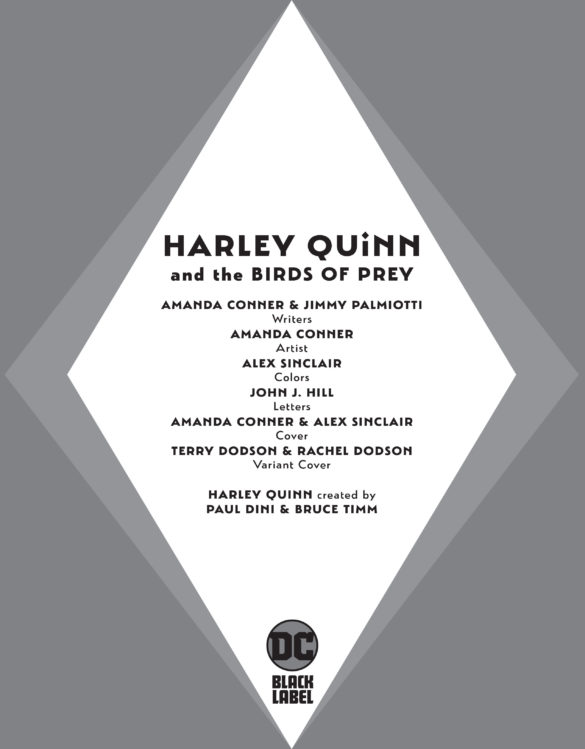 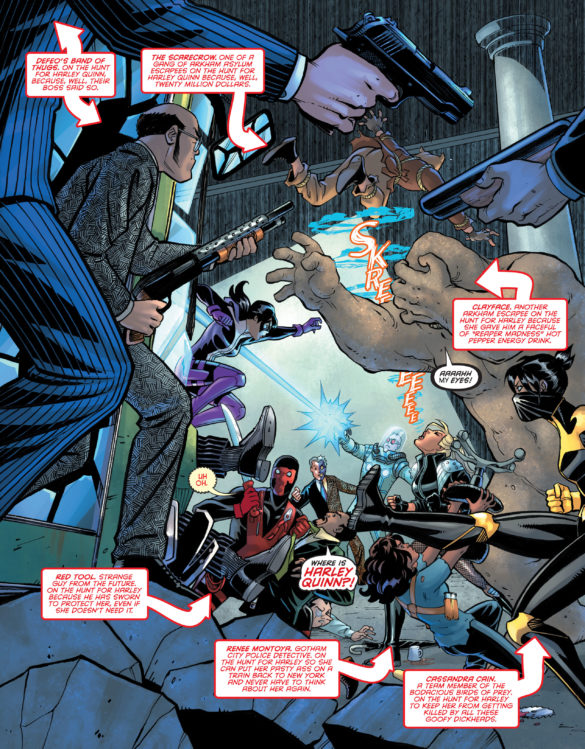 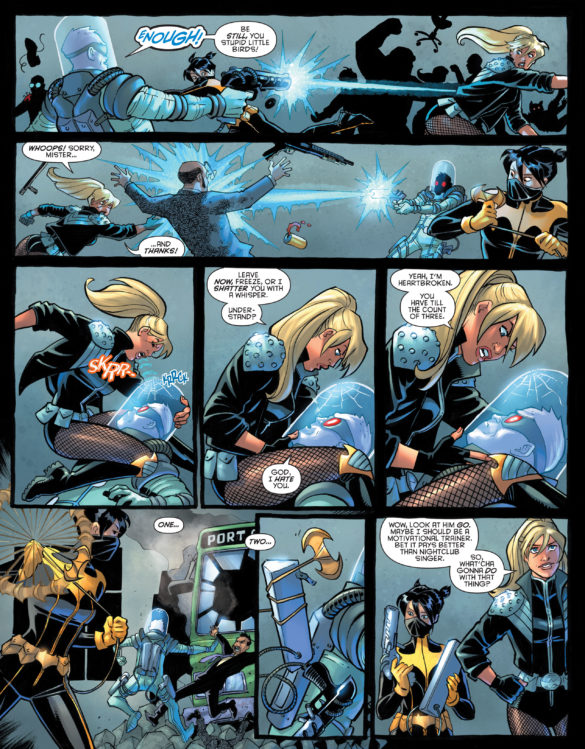 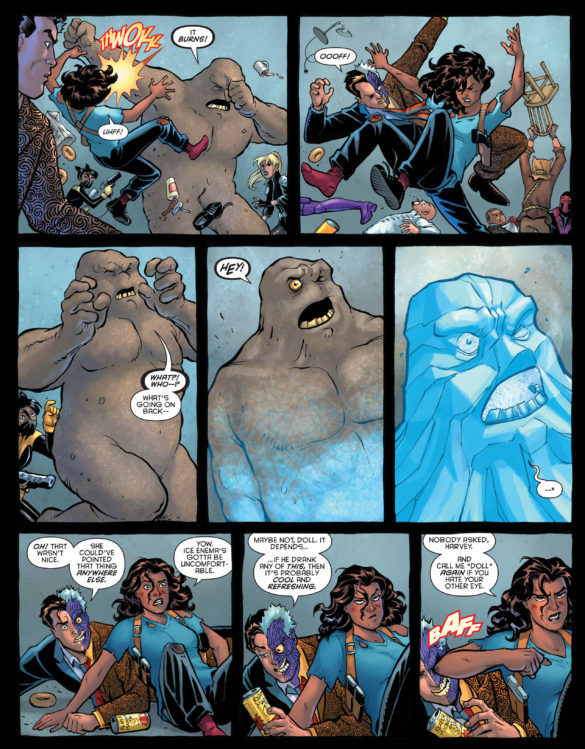 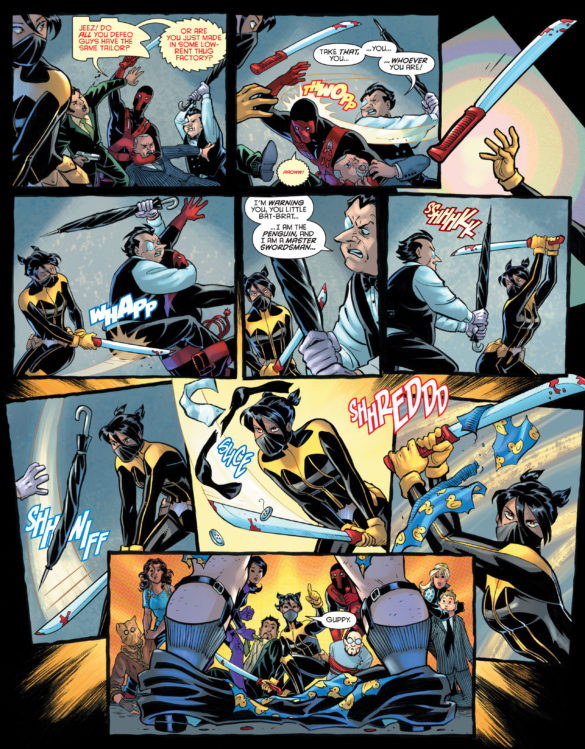 This Is The End, Friend

There are so many exquisite things to unpack about Harley Quinn and The Birds Of Prey #4, that I hardly know where to begin. For starters, Cassandra Cain steals this show from the other Birds of Prey. Don’t get me wrong, they all have moments to shine, but Cass MAKES this issue… tenfold. Her use of Mr. Freeze’s gun on Clayface is probably one of the most hilarious ends to a fight I’ve ever seen.

It leads to other great moments with Two Face and Renee Montoya, both slack jawed at the sight of what’s happened. Their commentary is priceless! Cassandra’s actions during the fight, and in moments spent with Harley, are some of my favorite of the issue.  They’re all great examples of the mastery displayed by the writing and art team. What they’ve given readers is unbridled fun, action, heartbreak, and redemption. Signed, sealed, and delivered in true Black Label fashion.

The altercation between Harley and Joker is one of the best things I’ve read, in the aftermath of their bellicose breakup. The only other one I’ve enjoyed more was the one from Harley Quinn Animated Series, so that’s really saying something. You can literally hear and feel it, rather than feel you’re just reading it from the pages of a comic-book. Brilliant writing, as always, by Amanda and Jimmy.

This series is abundantly enjoyable, from beginning to end. Harley Quinn and The Birds Of Prey #4 delivers all the ending that fans could hope for, and so much more. It’s a vile, hilarious, heart-warming, and action packed thrill ride. The writing’s whip smart, and the art keeps pace perfectly.

If you’re looking for a fantastic read in the Harley verse… look no further. You’ve got it right here.