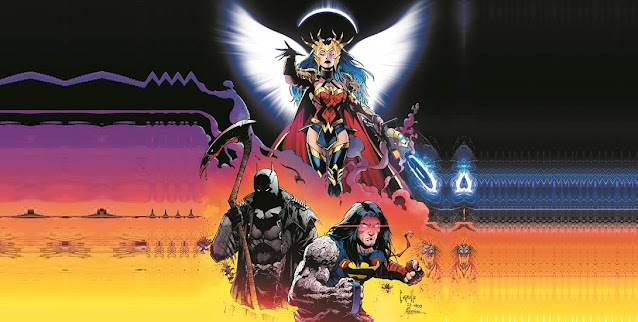 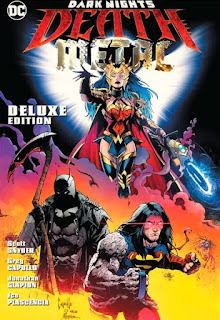 Testing… is this thing on? Check, one, check two… Welcome one and all to the last concert of the DC Universe, are you ready to rock? Here, at last, is the Dark Nights: Death Metal – Deluxe Edition, and things are about to get heavy. If you thought the original Metal series was crazy, this book is seriously going to rock your world(s)! 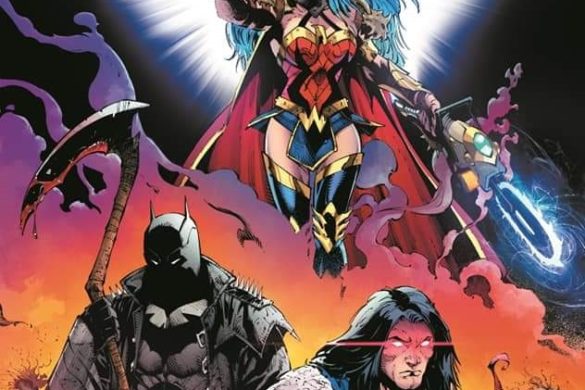 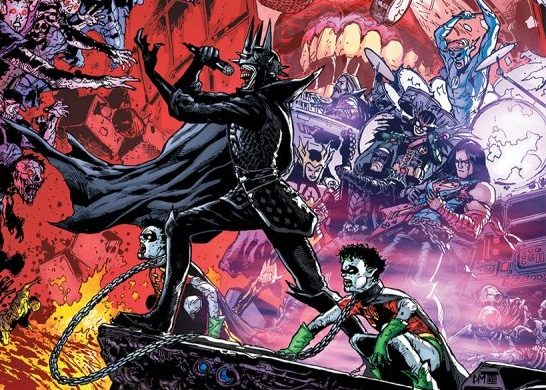 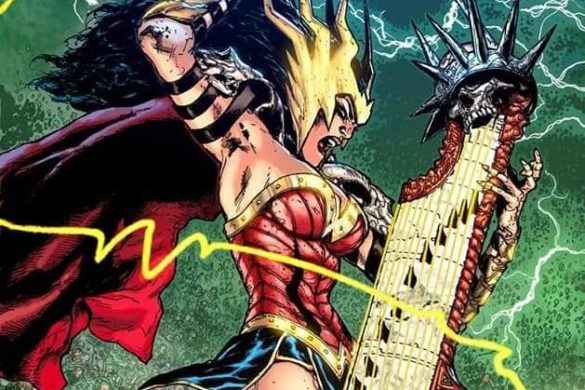 This beautiful, foil covered hardback collection collects all seven issues of the smash-hit series, which isn’t just a sequel to Metal, No Justice, Batman/Superman, Justice League and The Batman Who Laughs; it’s aptly subtitled “An Anti-Crisis”, a statement that will speak volumes to long-term fans of DC Comics, but can be completely ignored by newcomers.

Scott Snyder has, quite brilliantly, written a story that completely stands up by itself. Yes, ultra nerds like me will get a further layer of awesomeness – because of all the ties to the stories that have come before – but new readers will get a brilliantly bonkers, action-packed, comic-book roller coaster, that can be enjoyed all on its own.

This is the story I’ve been waiting for since Crisis On Infinite Earths #12 (1986), so this book has really made me very, very happy. Scott Snyder fans will see links to all his Batman work, right back to “The Black Mirror“, his stellar New 52 run, and the brilliant Batman: Last Knight On Earth. Comics fans who are just looking for fantasy at its finest will still get an extremely fun, enjoyable, and intriguing story. 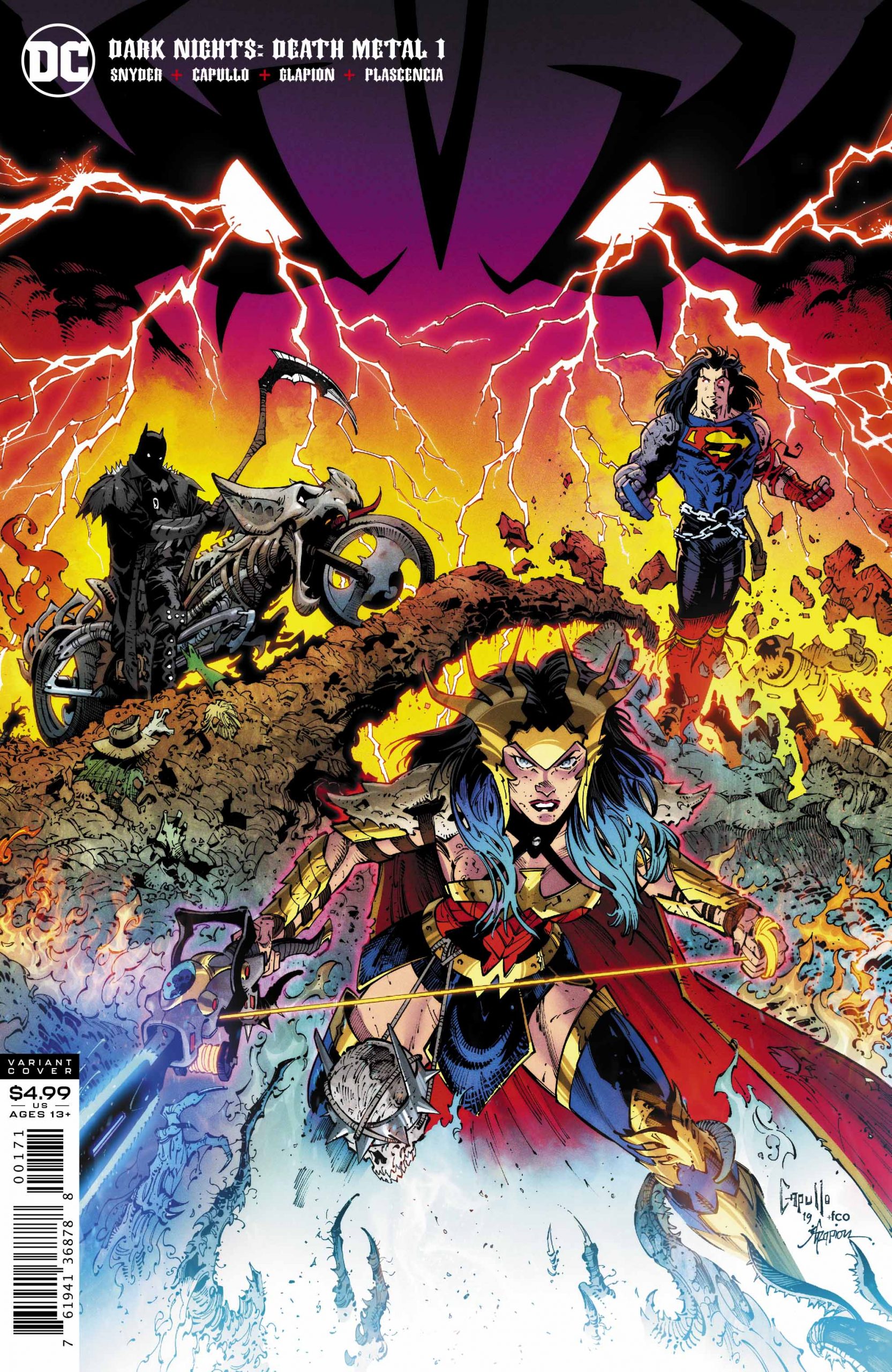 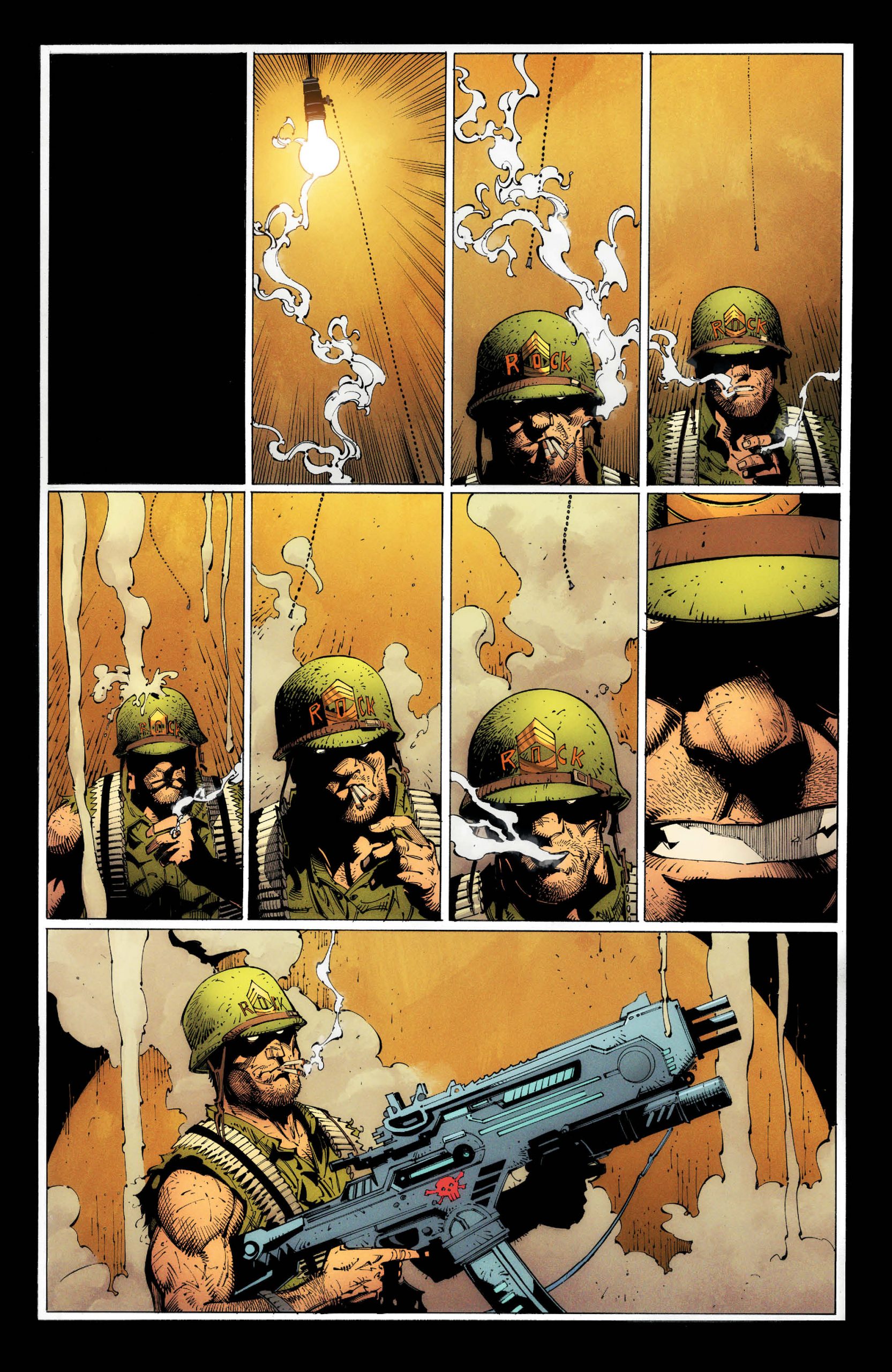 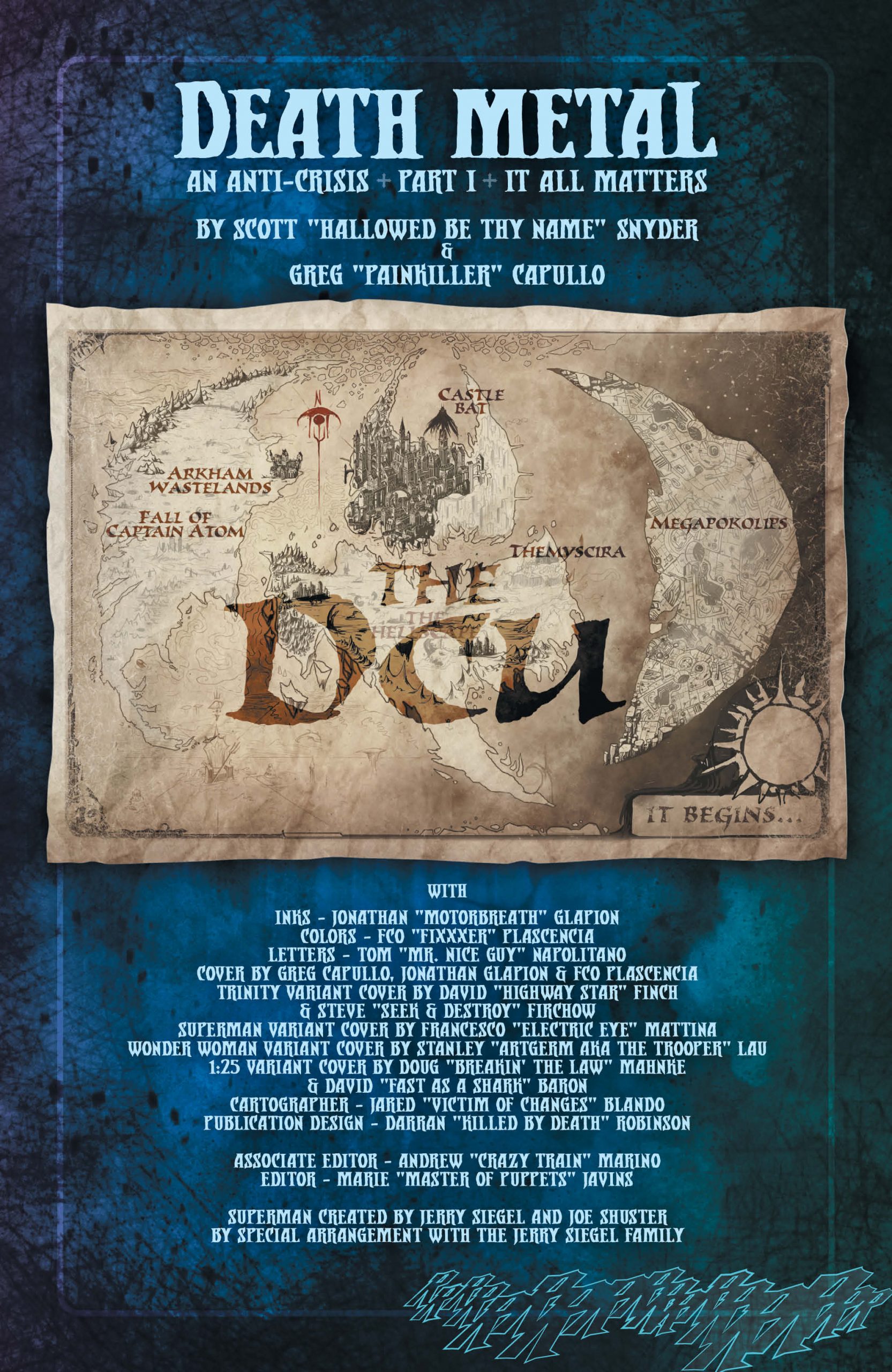 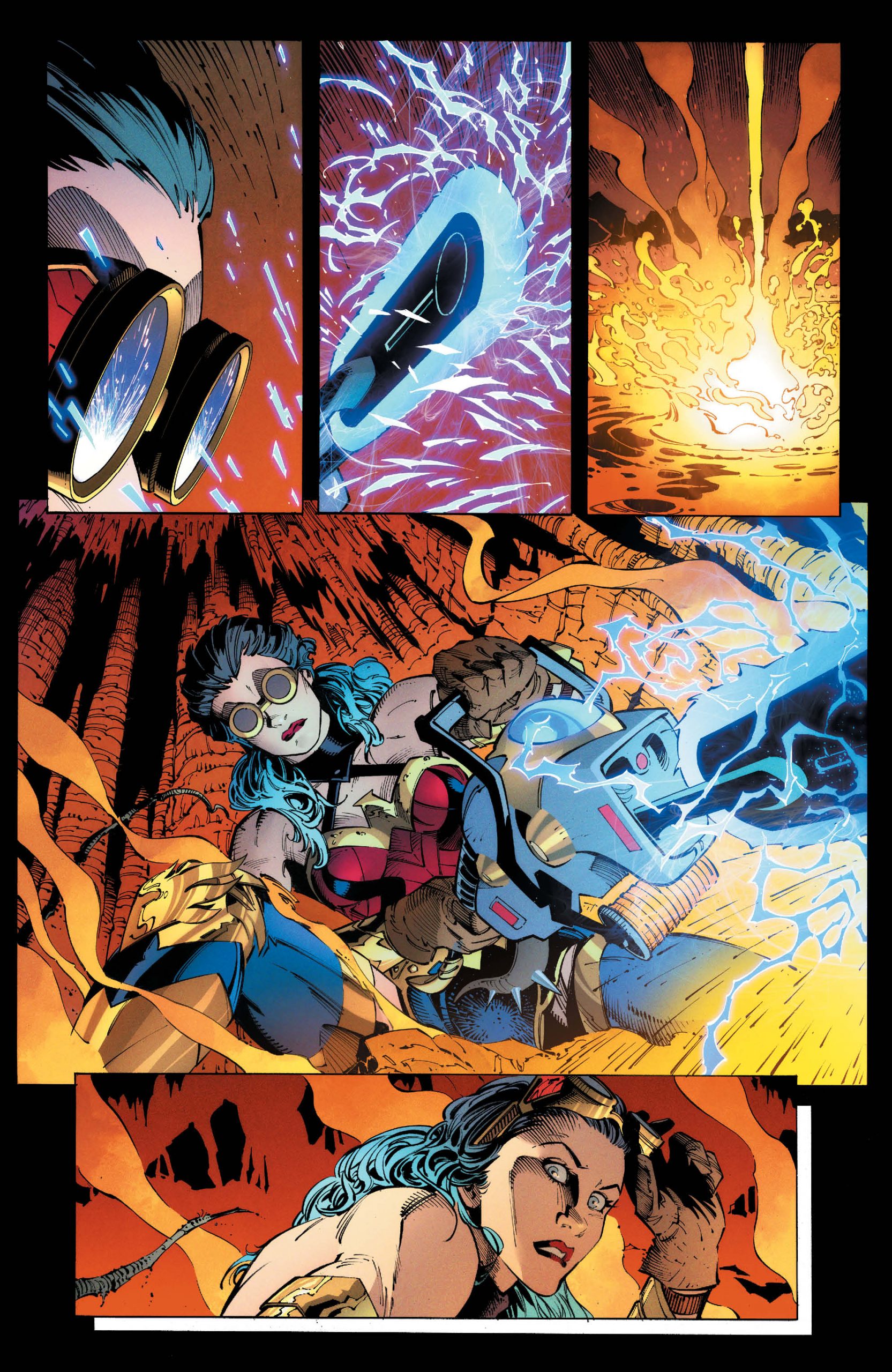 Detail, charm, storytelling… this collection has it all. Mind-blowing double spreads cataloguing the history of the DC Universe, several circles of hell; and new Batmen, so off the wall that they make the Dark Knights of the original Metal look tame, by comparison.

We have cosmic powered villains, universes shattering stakes, and colorful characters aplenty, but Dark Nights: Death Metal looks at the souls of them all, shining a light on what makes them great now, and what always has. I’ve been saying for decades that Scott Snyder clearly loves comics. Never has this been more obvious.

Superman seeks to pull out the best in us. Batman seeks to curb the worst. You… seek the truth. In this final war, the truth is the metal by which we will live or die.

In a few short sentences, Scott Snyder has given us the essence of the three mainstays; the backbone, the originals, the world’s greatest superheroes. DC’s Trinity. The characters from whom everything else flowed, and followed. Thank you, Scott. 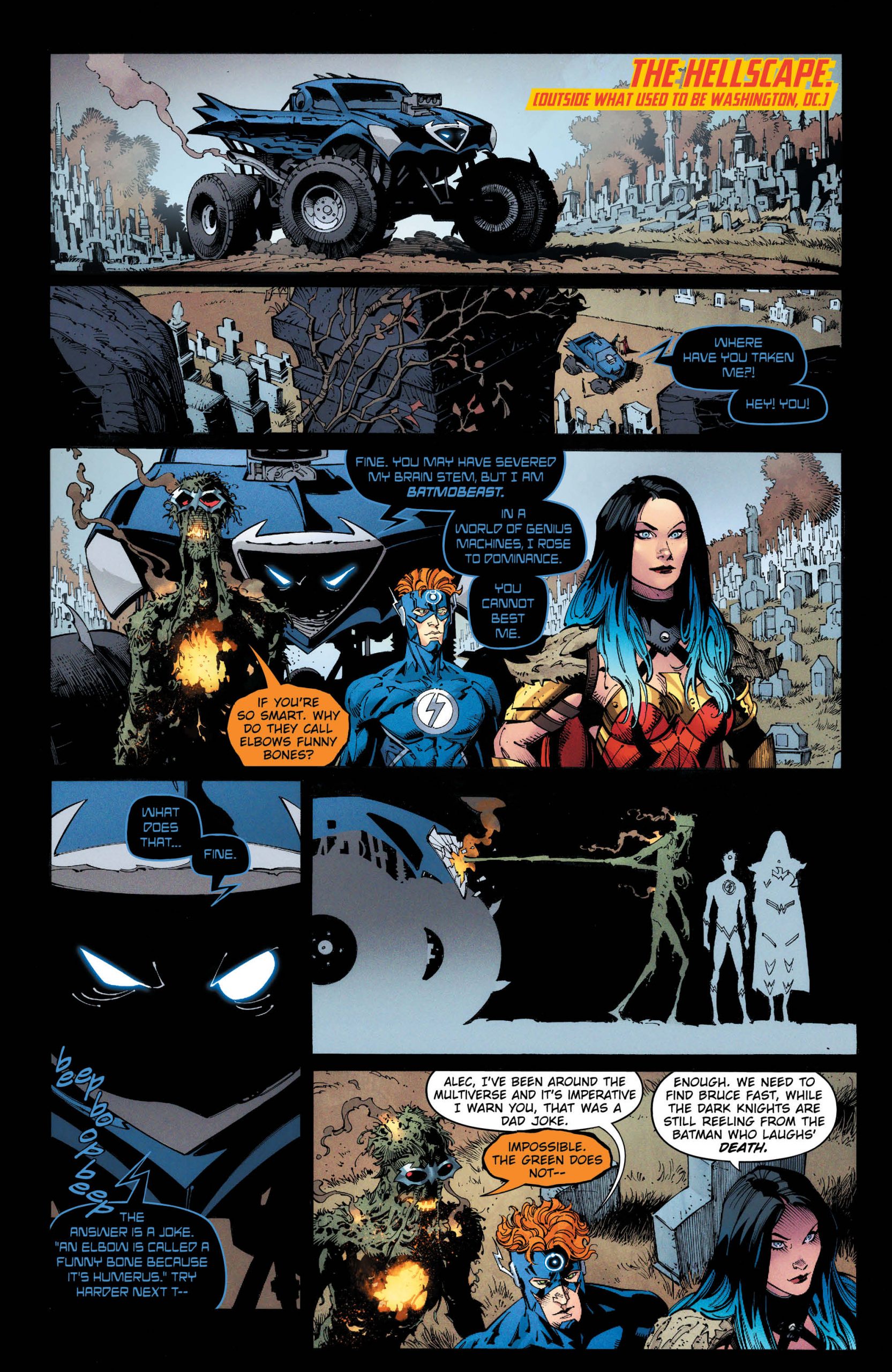 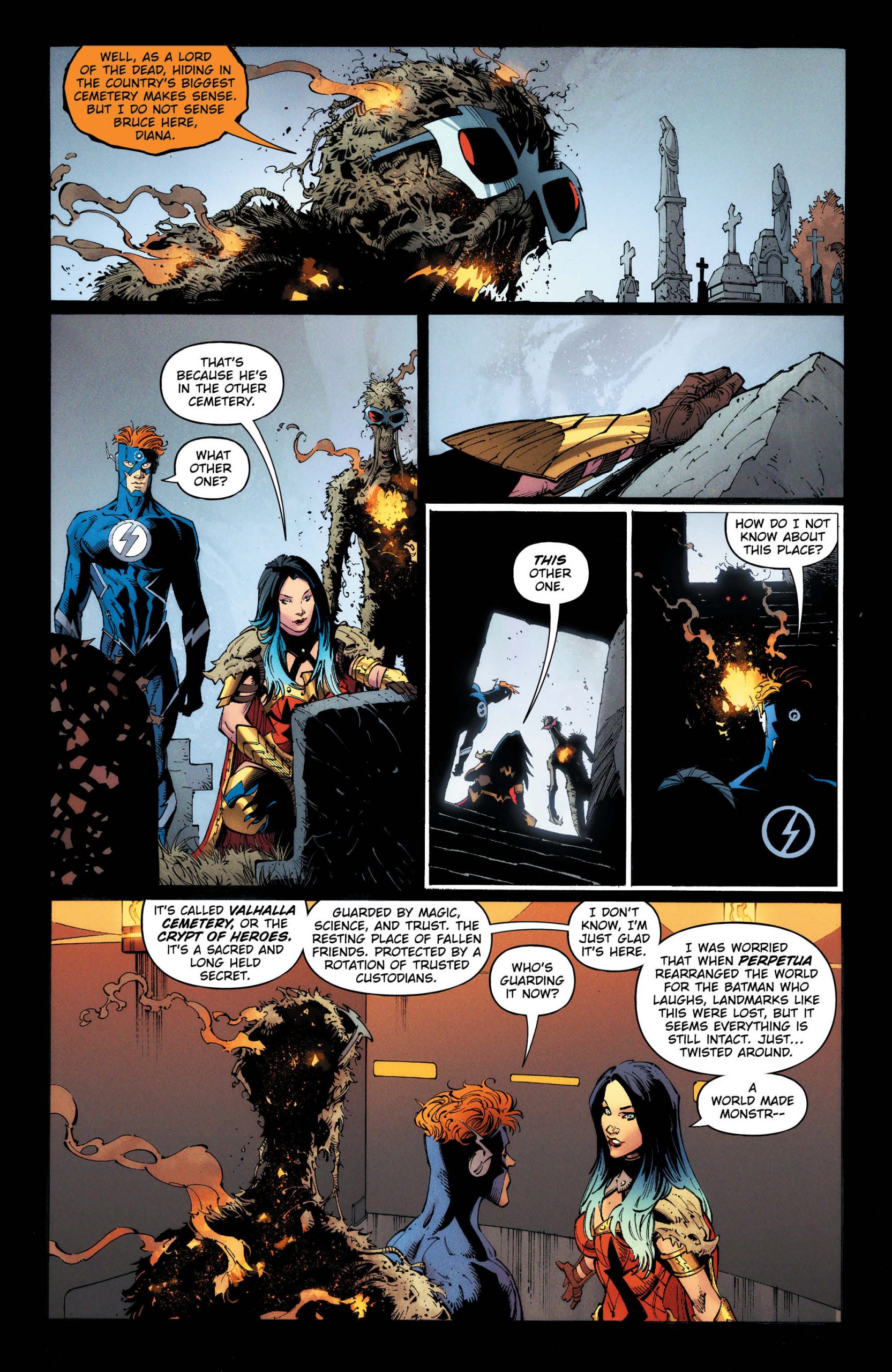 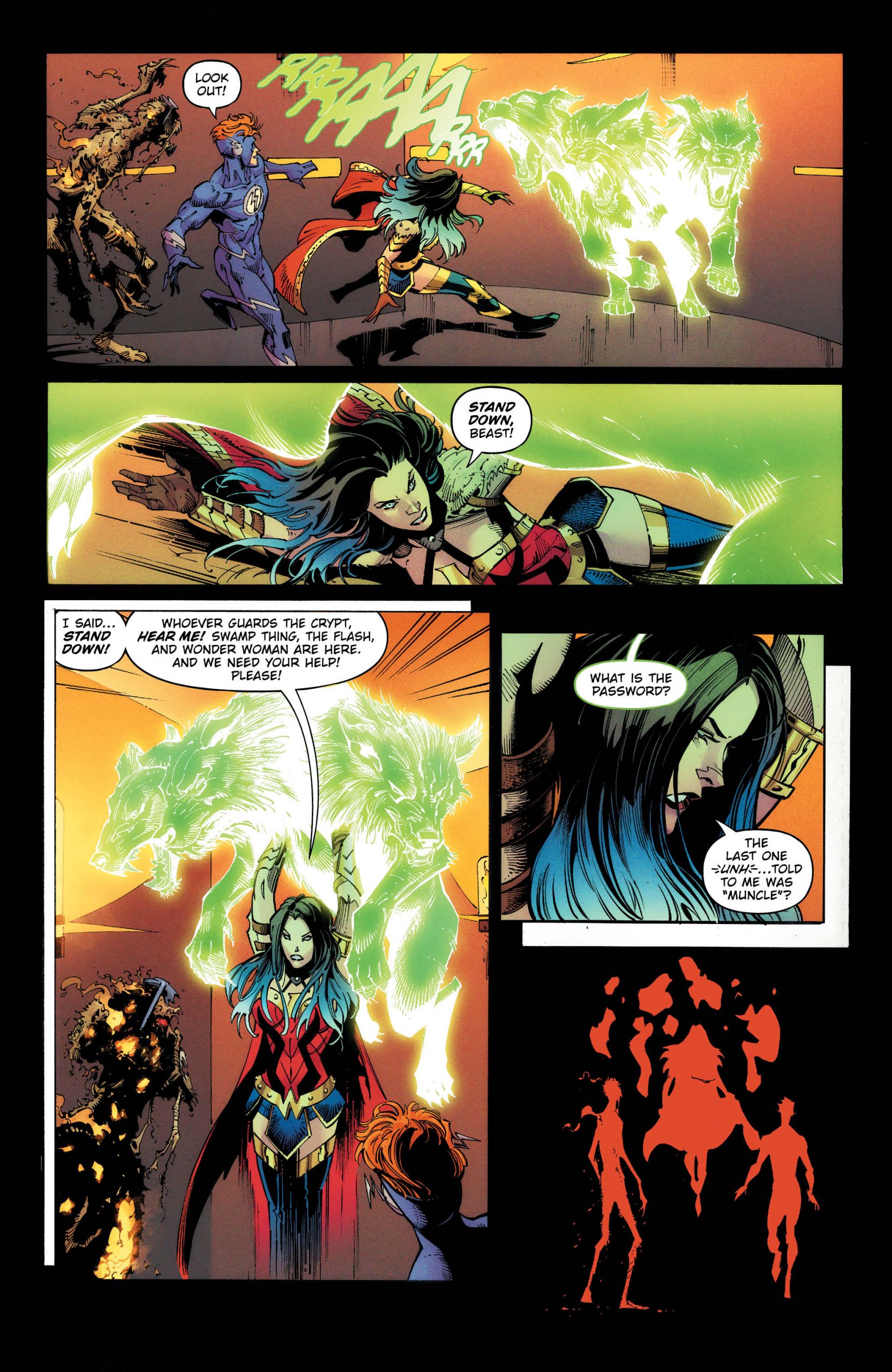 The art in this book is drool inducing. The removable foil cover is gorgeous (it’s so shiny), the band variant covers beneath it are stunning, and the interiors are every bit as good. Greg Capullo and Jonathan Glapion can do no wrong, and this story could be the finest work they’ve ever produced. From the opening sequence, with a ranting Sgt Rock (no-one could ever call this soldier spineless), all the Tolkien-esque maps of the DCU, and everything that follows, every page is eye candy of the highest order.

This art team has always been incredible, but the work they produced for Death Metal is simply jaw dropping. We’ve always known that they can deliver action, and huge set-pieces, but sometimes a simple facial expression; a glance from a character straight the audience, or a thoughtful look into the distance, can evoke more of an emotional response than all the cosmic carnage in the world… or multiverse. 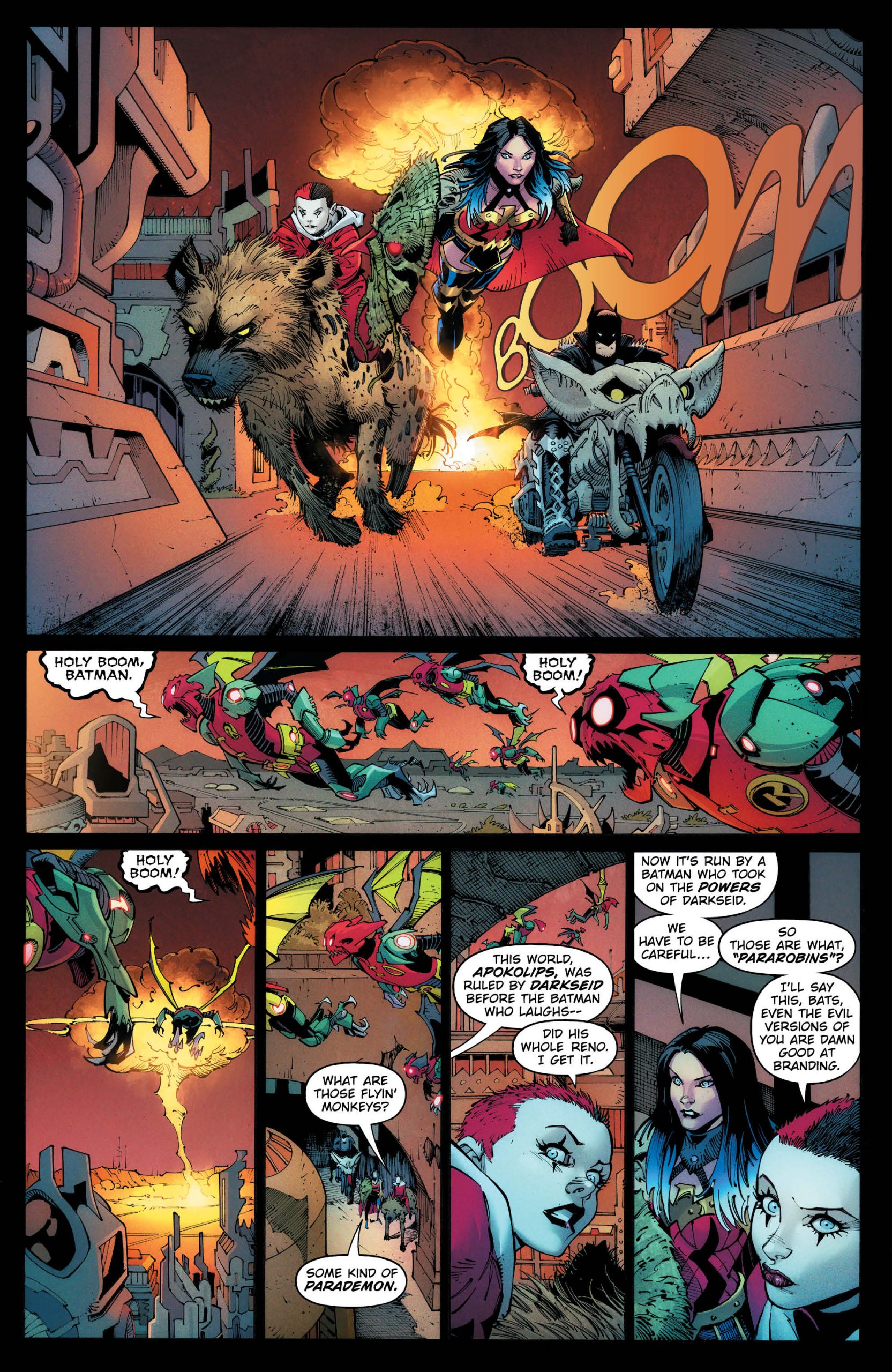 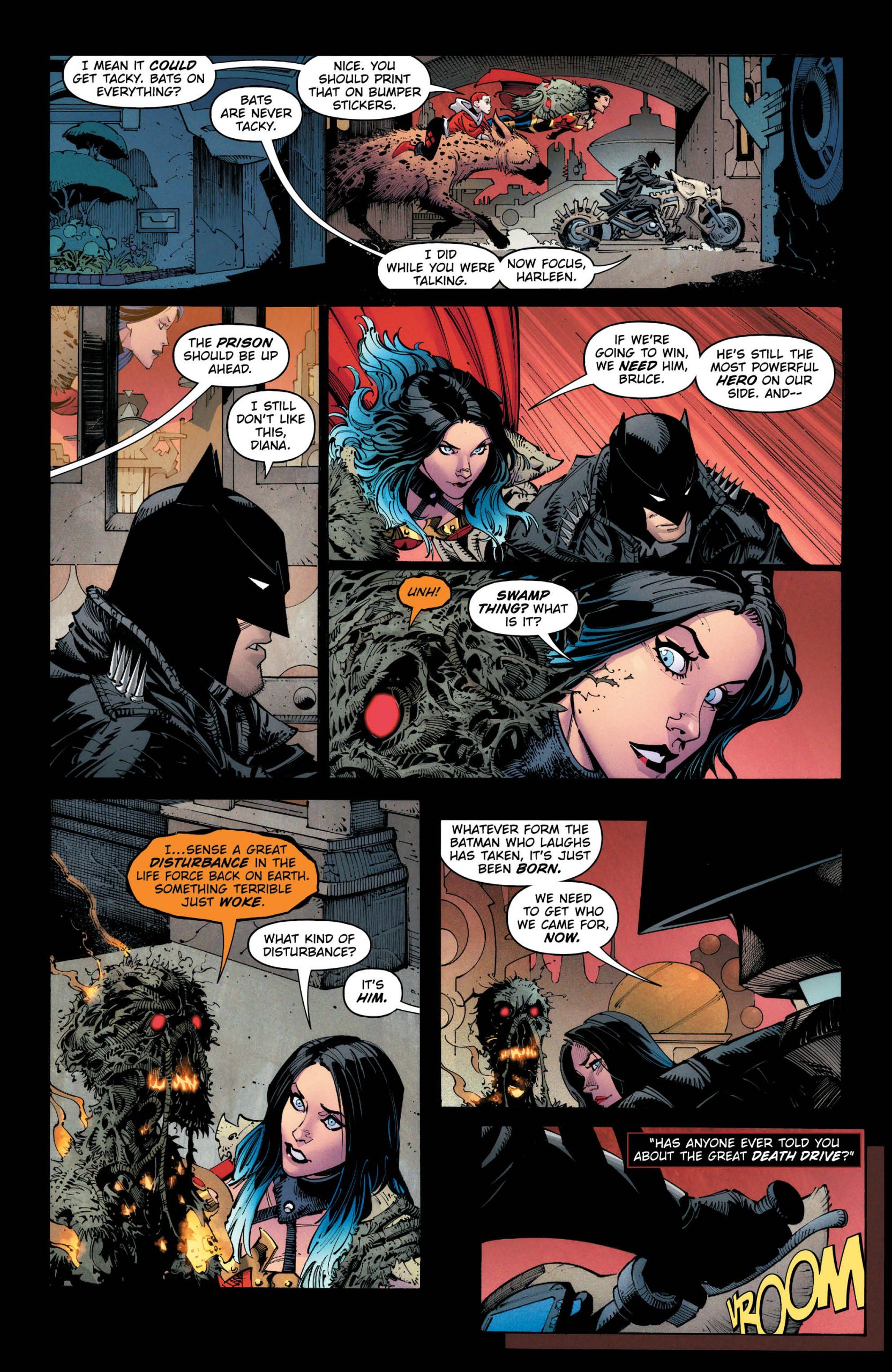 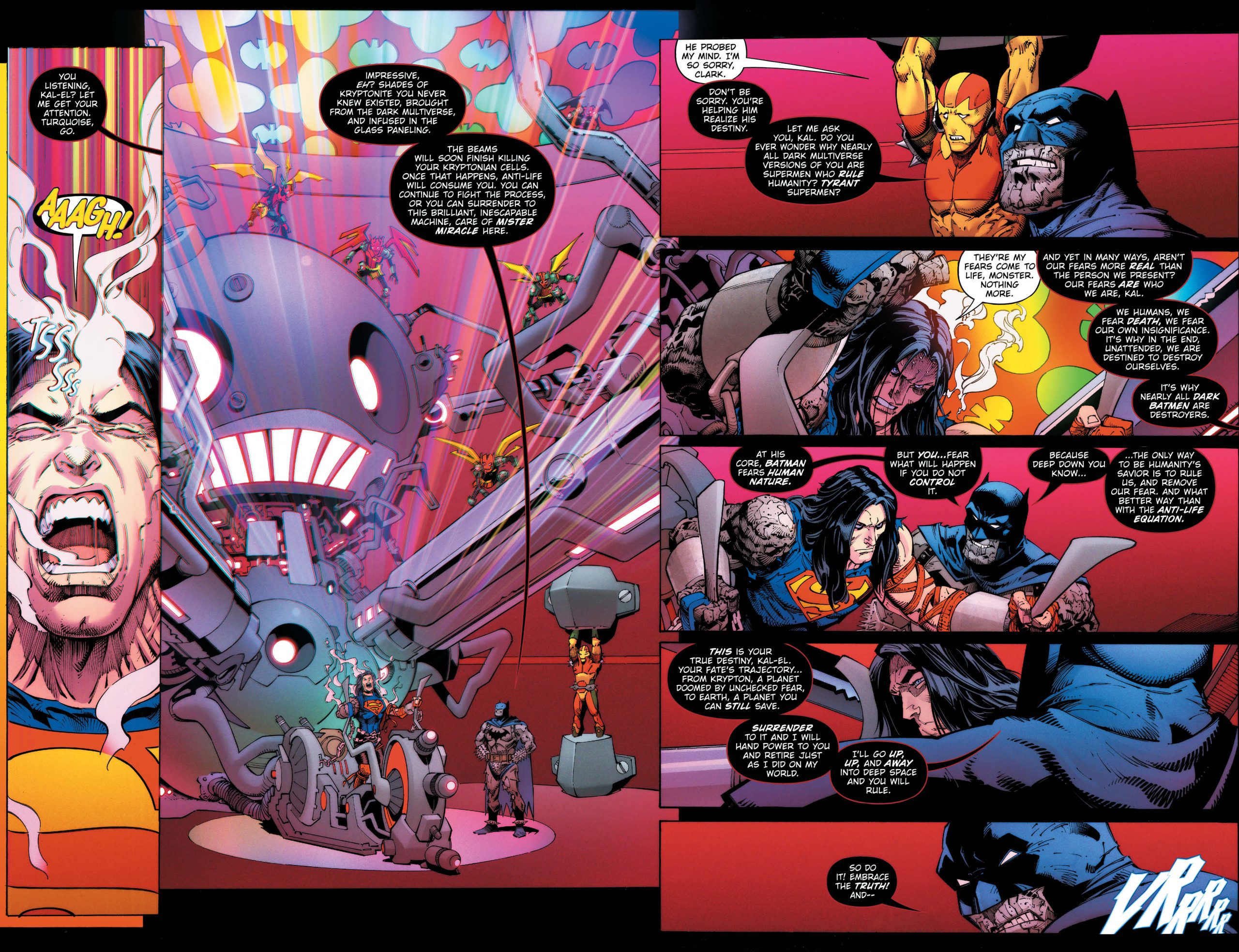 FCO Plascencia and Tom Napolitano’s efforts are every bit as gargantuan, and as gorgeous, as those of their frequently more lauded, and recognised colleagues. This book is quite wordy, but never boring, or a chore to read. Thanks, Tom.

Capullo and Glapion’s art is gorgeous, but FCO Plascencia’s colors move the line-art from great, to excellent. Comics are a team effort, and the team behind this book is as awesome as the group of heroes and villains, fighting to take down the Darkest Knight, and his army of evil.

The epilogue, was drawn and colored by a stellar list of talents. While I perhaps would’ve preferred for Greg Capullo, Jonathan Glapion and FCO Plascencia to have handled the whole book, the denouement does clearly point to this story being the end of one ear, as well as the start of something new. The end result, while not as visually cohesive as I would’ve liked, still looked gorgeous, and delivered a terrific read. 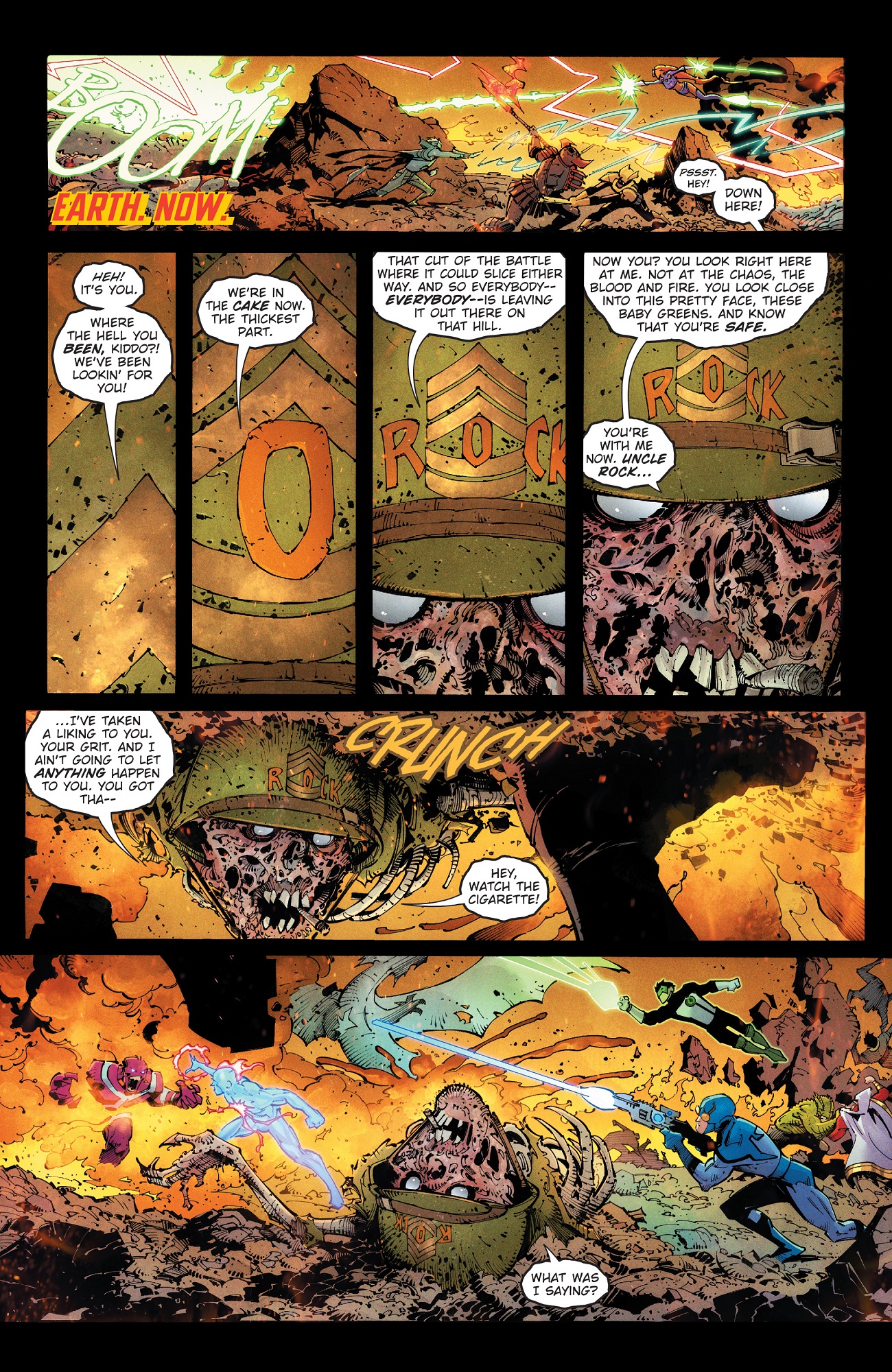 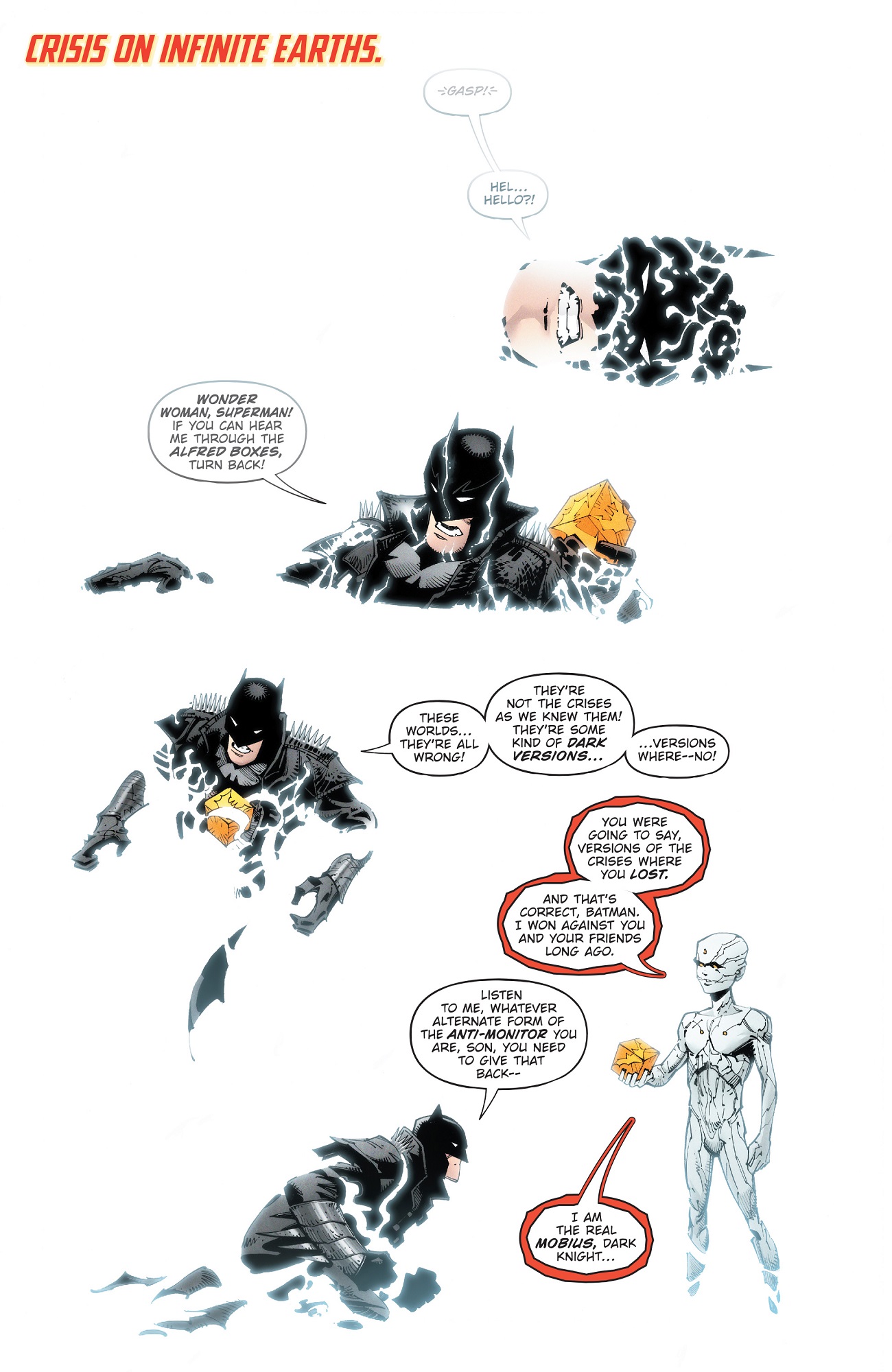 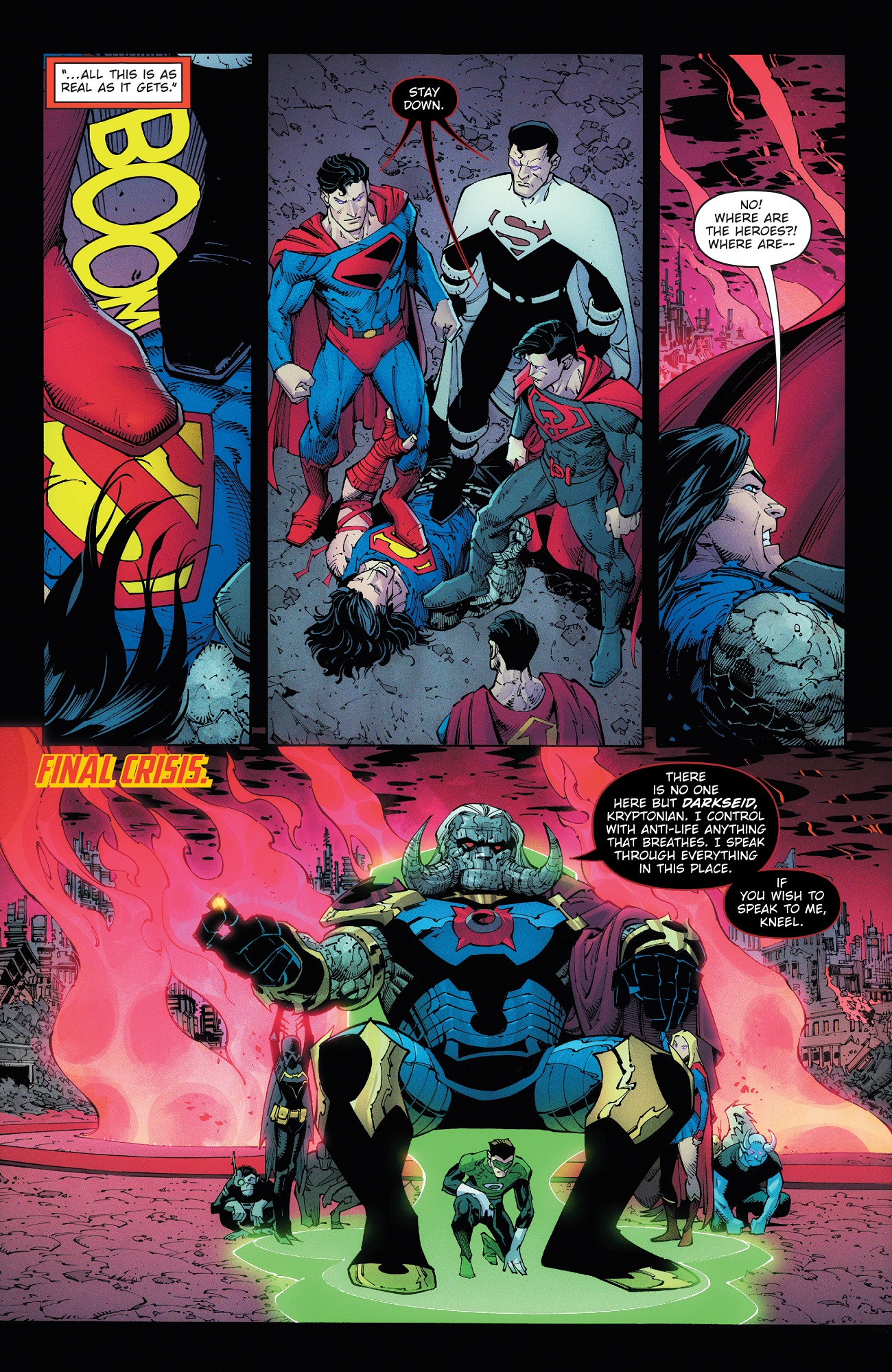 Universes – real or imagined – heroes corrupted, villains in charge, and a world in ruins, the Dark Nights: Death Metal – Deluxe Edition has everything. Yes, there’s a ton of stuff that many may find too wacky, or surreal… let it go! Ride the wave and see where it takes you, I say.

There are ideas so simple that I can’t believe no-one’s used them before (the uses for parts of Diana’s invisible plane… genius!) There are also story beats so bonkers, that I wonder if the creators aren’t actual time-travellers who never escaped Woodstock. 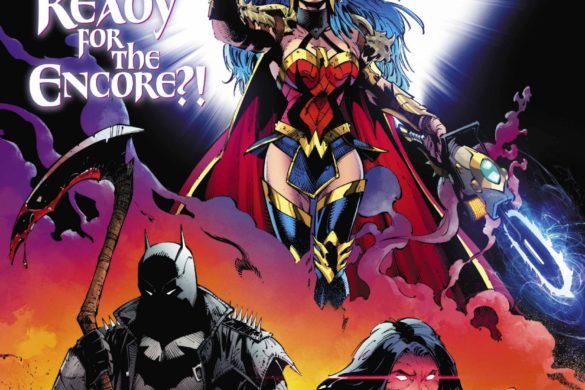 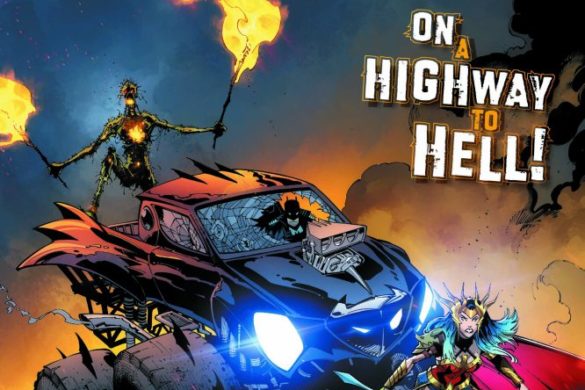 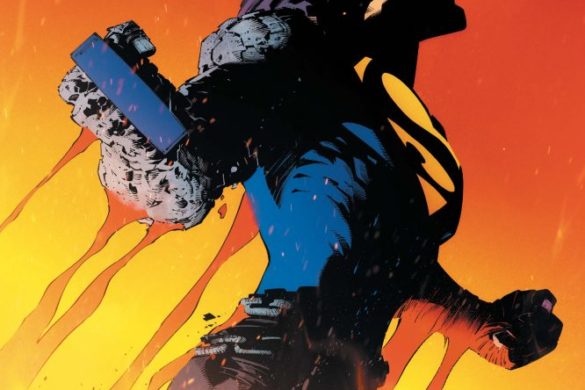 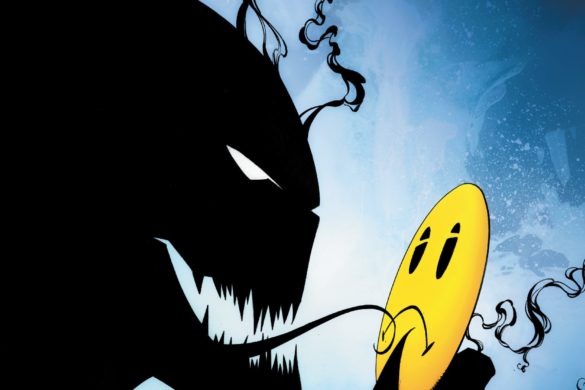 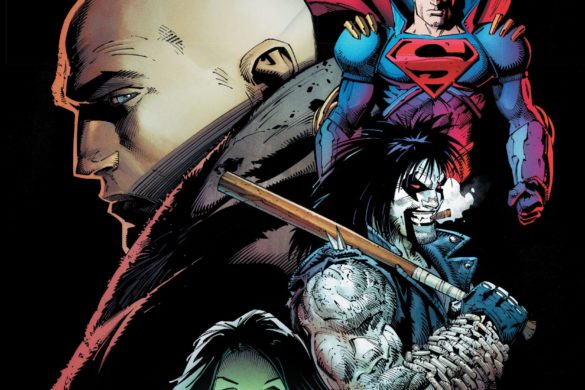 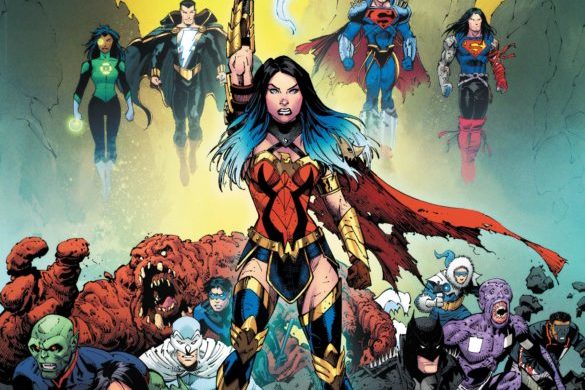 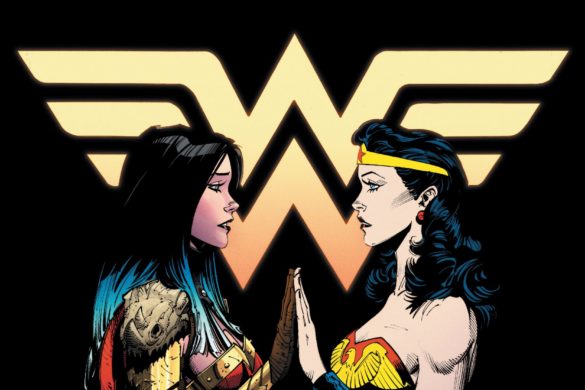 This edition collects the main seven issues, not the one-shots/spin-offs,…but that’s the heart of the story. Anyone can enjoy this incredible tale without all the extras, but those who may (wisely) invest in picking up every collection will receive a powerful, and truly rich reading experience.

Think of this lovely book as Death Metal: Greatest Hits; a collection that shows the progress and history of “the band” by way of all their high points. If you want the whole story (which is well worth picking up) think of those as all the albums the band ever made. Just remember, not every track on every album is a hit, while this book is totally, 100% chart topping material.

The Dark Nights: Death Metal – Deluxe Edition is out on April 6th, but can be ordered right now.