Writer: Scott Snyder
Artist: Tony S. Daniel
Color Artist: Tomeu Morey
Letterer: AndWorld Design's Deron Bennett
Review by Steve J. Ray
There are certain writers who, over the years, have become a "sure thing". Creative talents where I know that pretty much anything I pick up with their name on it will be good. One of those writers is Scott Snyder.
In recent years his name has been synonymous with DC Comics, mainly due to his great work on Batman, Justice League, and the Dark Nights epics. What many may not know though, is that he also writes the brilliant Undiscovered Country for Image Comics; purveyors of some of finest creator owned titles in the industry. This is also now the home of Scott's latest project, Nocterra.
The series has started off well.
Imagine a book that honours the horror classics of the past, as well as road movies, post apocalyptic futures, sci-fi, fantasy, and family drama. Nocterra covers all those bases, just in the first chapter! This is a world where day never comes, and the night produces horrors beyond imagining.
The end result gives us creatures that are scarier than vampires, faster, deadlier, and stronger than zombies, a world where humanity is struggling to survive, and an Earth covered in a blanket of perpetual darkness.
Now, I know this sounds bleak, and borderline depressing, but - as with all great horror fiction - the darkness has light that fights to shine through, this time in the form of the great, well imagined, brilliantly designed, and totally believable characters that inhabit this terrifying new world. 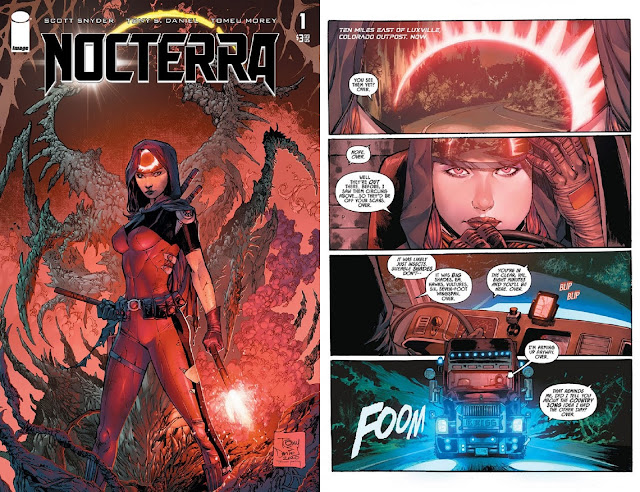 Strange New World
This is a new series, but the creators are veterans and masters of the game. Tony S. Daniel has drawn some of my favorite comics of the past decade. If "Batman R.I.P.", "Battle For The Cowl", and Detective Comics ring any bells, then you'll know exactly who I'm talking about. Mr Daniel knows what he's doing, and if you take a look at the art in this review, I'm sure you'll agree.
This is an artist who's every bit as at home delineating breakneck speed, pulse-pounding action, and quiet character moments. His protagonists move like real people, laugh, cry, and act like them too. Don't you just love it when a comic-book looks every bit as great as it reads?
Of course, the astonishing color art of Tomeu Morey helps. Man, this guy just rocks! I fell in love with Mr Morey's hues after seeing his work on Tom King's Heroes In Crisis, and he's never let me down. This book is dark, yet it starts as brightly as you could ever wish, but after the shock of page 5, the book is filled with blood reds, neon blues, and unnatural halogen yellows.
It's gorgeous.
The icing on the cake is Deron Bennett's lettering. The lead character, Val, has her uniquely colored captions, and every FOOM, and SCREEE fits in with the bluster and conflagration that Tony Daniel and Tomeu Morey fill these pages with. Look above and below, and see for yourself. 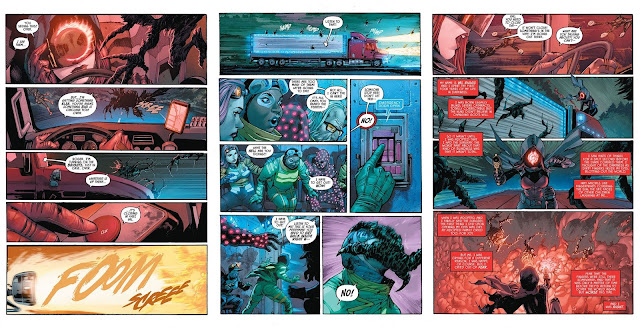 Weird Science
The only thing I question in this book is the total darkness. As we all know, if no sunlight could reach the Earth Photosynthesis would halt immediately, and most plants would die in a few weeks. Large trees, however, could survive for several decades, thanks to slow metabolism and substantial sugar stores. With the food chain's bottom tier knocked out, most animals would die off quickly, but scavengers picking over the dead remains could last until the cold killed them.
Humanity could theoretically survive near nuclear, or geothermal-powered habitats, and could continue harnessing volcanic heat for hundreds of years. We don't see that in this issue, but it is only #1 after all. Also, we don't hear that the sun is no longer there, as temperatures don't seem to have dropped drastically, it's just perpetually dark. Perhaps whatever is causing the darkness is filtering out visible light, and what's coming through is what's causing the mutations and horror?
Conclusion
Whatever the case, this issue has made me think, which is a huge plus in its favour. Yes, I'm intrigued, and I can't wait to read more.
Fear of the dark is primal, and knowing that it affects millions all over the globe, including the writer of this series, delivers an immediate hook. I really enjoyed Nocterra #1, and am greatly  looking forward to issue #2.