Review: Avengers: Curse Of The Man-Thing 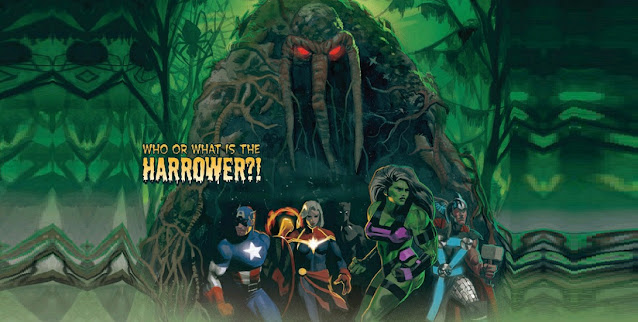 "Avengers: Curse Of The Man-Thing"

A few months back, my lovely friends and colleagues over on the DC Comics News Podcast network interviewed the wonderful Steve Orlando, and what a great conversation it was! It seems that Mr. Orlando thought so too, as a few days back we were sent a review copy of his new project, Avengers: Curse Of The Man-Thing. Good news/bad news. Sadly, DC Comics News doesn't review Marvel titles (yet?) The good news? Fantastic Universes covers anything we love, or think is great.

This comic is great. 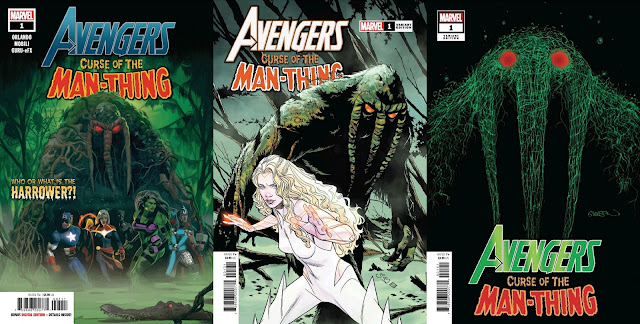 The story centers around the creature known as - you guessed it - Man-Thing. Worry not if you know nothing about Ted-Sallis, or his salad-like other self, as Mr. Orlando brilliantly – and concisely – gives us the character’s back story in the comic itself. If you don’t know, like, or even care about Man-Thing (though, I think you will by the issue’s end) you’ll still get to enjoy the exploits of some of Marvel’s finest; Captain America, Thor, (She) Hulk, Captain Marvel, Black Panther, and more. 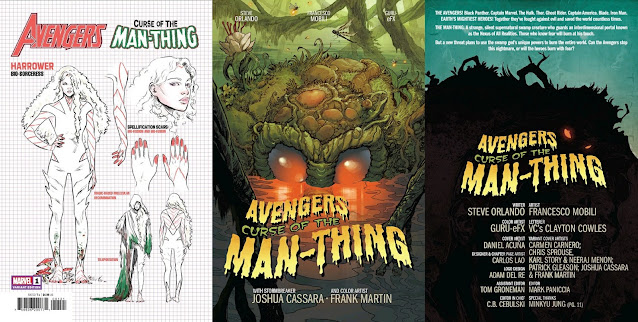 So, what we then get is an action-packed superhero romp, a deep dive into the history of Man-Thing, and a retrospective of the Super-Soldier Serum (and many of its recipients). Then add horror, thrills, fire, fear, and the introduction of a lethal new villain.

Oh, yes… keep an eye on the Harrower. This lady's scary, vicious, and powerful.

One of the many things I’ve always admired about Steve Orlando is that he’s one of those writers who clearly loves comics. His knowledge and his quite clear affection for these characters (Man-Thing and Captain America in particular) shine from every page.

Whatever knows fear burns at the Man-Thing’s touch!

Speaking of shining, the art and colors by Francesco Mobili and Guru-eFX are resplendent.

Like I said, there’s a ton of action in this book, but there’s plenty of heart, and conversation too. Mobili draws it all beautifully. This is my first exposure to his work, and to the color wizardry of Guru-eFX. Let me just say that I’m impressed! This comic isn’t all just muscles, mayhem, flames, and spandex. There’s some great storytelling, brilliant body language and some very well rendered facial expressions on show, too.

Guru delivers some great lighting effects in his color art; flames, energy, dim and dusky swamp shadows, and the bright light of day. All of it feels as natural and real (or as unnatural, or unreal) as the story requires. Then again, he’s a veteran with over 25 years experience, so I would expect no less. 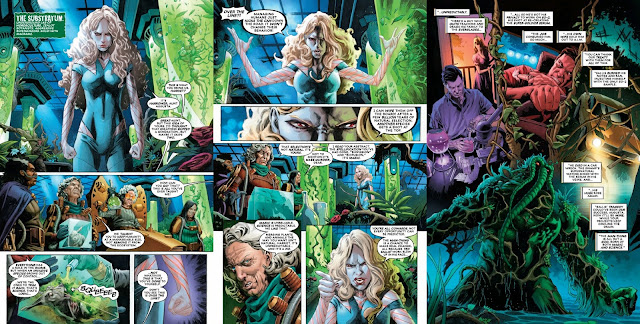 Letterer Clayton Cowles is someone whose work I’m very familiar with and truly love. This guy’s lettered some of the biggest blockbuster series of recent years, including Heroes In Crisis, and the ongoing Batman titles for DC Comics, as well as the epic King In Black, and Eternals for Marvel (amongst many, many others). This guy never disappoints, and always delivers. Avengers: Curse Of The Man-Thing is no exception.

Getting this comic was a lovely surprise. In fact, it was so nice that I’m going out to buy not just this book, but both the follow-up issues, too.

I feel as if a shift is coming; like this comic is just the start of something new, and something big. The revelation on the final page is a game-changer, and with a writer like Steve Orlando at the helm, I feel that Man-Thing’s future is in very good hands.

Yessir, Avengers: Curse of The Man-Thing is a highly recommended read.