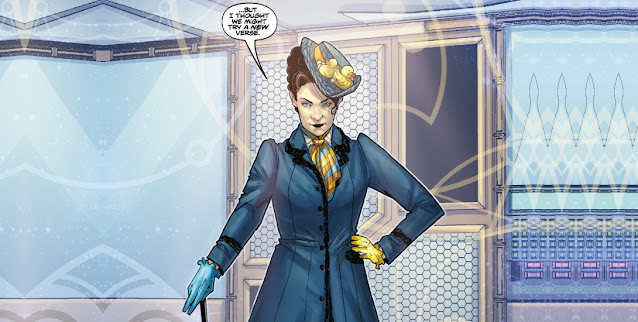 In Doctor Who: Missy #1, the wayward Time-Lady wages war on the Doctor, but this time she’s not alone! Can the combined brilliance of the Third and Twelfth Doctor avert her deadly scheme, or will she get her hands on a secret weapon capable of wreaking havoc on the universe?

This special story, celebrating the 50th anniversary of the Master’s first appearance on TV (as first played by Roger Delgado in “Terror of the Autons” – January 2nd-January 23rd 1971, until his sad passing in 1973). The series will feature more Doctors and Masters than ever before.

Following on from the Doctor Who Comic crossover adventures (where the Tenth and Thirteenth Doctors battled villains like the Weeping Angels, and the Autons) this new story sees the series expand its horizons even further, with the appearance of the Twelfth Doctor’s arch-rival Missy (as played on TV by Michelle Gomez, between 2014-2017).

I’m so happy to report that this new tale is being written by the amazing Jody Houser, who I actually rate as one of the greatest Doctor Who writers ever. I’m not just talking comics here, either, I mean favorites ever, in any medium. Houser is one of the elite few who translates the voices, and personalities, of the TV characters, from the screen to the page perfectly. When I read her dialogue in this comic, I can clearly hear the voices of Michelle Gomez, and Roger Delgado.

It’s so great to see the original TV Master interact with the first female incarnation of the character (and their relationship has an extra special Jody Houser twist, when they meet in this book). It’s also particularly apt as the Twelfth Doctor, as brilliantly played by the hugely underrated Peter Capaldi, frequently paid homage to Jon Pertwee’s Third Doctor, who was Delgado’s Master’s arch nemesis.

I’ve always raved about the art team of Roberta Ingranata, Enrica Angiolini, and Shari Chankhamma, and this issue’s no different. Just as Jody Houser makes her characters sound like their living counterparts, these three talented artists bring these people, and scenes, to life too.

The scene where Missy wanders the corridors of Stormcage prison, and sees many of the Doctor’s enemies languishing behind bars, is pure magic. Seeing all those baddies represented really made me smile. How many can you name?

Oh… and the Master and Missy have a sword fight. Is this heaven? Along with Ra’s Al Ghul, the Master is the one villain I most associate with swordsmanship. Both have villainous facial hair, and both have a lust for power. The amazing thing is, both these timeless villains also made their debuts in 1971! (The renegade Time-Lord pre-dates the immortal by a mere 6 months).

Doctor Who: Missy #1 is lettered by Richard Starkings. This man is a legend, and can do no wrong, in my honest, and humble opinion.

I have to wait a whole month for issue #2.

I’m biased, but I feel like this comic was made for me. The Third Doctor and the original TV Master were my introduction to the characters, when I was a tiny child. Yes, those glimpses were fleeting, but thanks to digital media I own all those classic adventures, and love them still. As you can imagine, that all adds of my complete awe and admiration for Jody Houser, and the entire creative team behind this book.

This is the perfect comic for all Doctor Who fans, old or new.