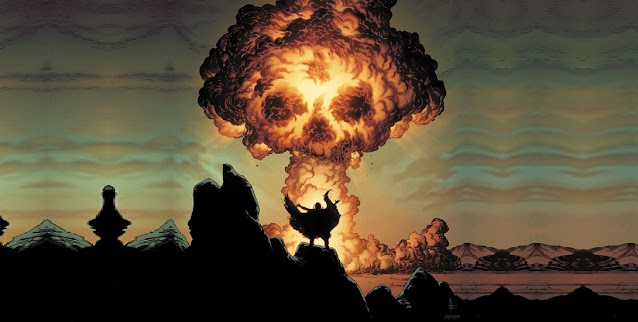 You know that when a comic goes to second print before it’s even hit the shelves, on pre-orders alone, that you’ve got a hit on your hands. Geiger #1, from Image Comics is a hit, in every sense.

Let’s think about this for a second. First of all, Geoff Johns is one of the hottest writers out there, not just in comics, either. Then add superstars Gary Frank, and Brad Anderson to the mix. This team has already blown the hinges off comic shop doors all over the world with Doomsday Clock, and Batman: Earth One, so there was a built in fanbase already chomping at the bit for this release. Now add Rob Leigh, arguably the most prolific letterer in comics – and undoubtedly one of the very best – to round off the creative team, and what you get is almost guaranteed excellence.

Then there’s the clincher; this isn’t a big-two book. This is a creator owned, new, no previous continuity ties, unabashed, no-holds-barred, world-building, standalone epic. This isn’t muscle bound, spandex wearing people beating the $#!+ out of each other. This isn’t a superhero book. No, this is something else. 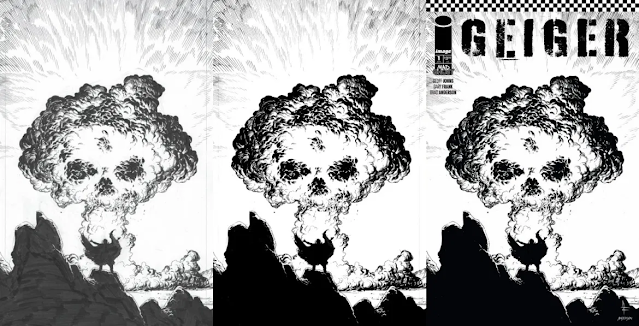 A great script, tight dialogue, realistic characters, an original plot, terrific art, colors, and letters. That’s just for starters. The main course? A condemnation of racial profiling, and intolerance, a future wasteland, nuclear fallout, a return to a feudal state, action, horror, and everything in between.

OK, so we may have seen bombs going off, glowing, radioactive heroes, post-apocalyptic dystopias, and mankind reduced to scavenging before (Mad Max, Batman: No Man’s Land, and The Walking Dead are but a few notable examples), but never quite in this combination. Geiger #1 gives us 1960s Marvel, 2000s DC, George Romero, Camelot 3000, and more, in one tidy little package. 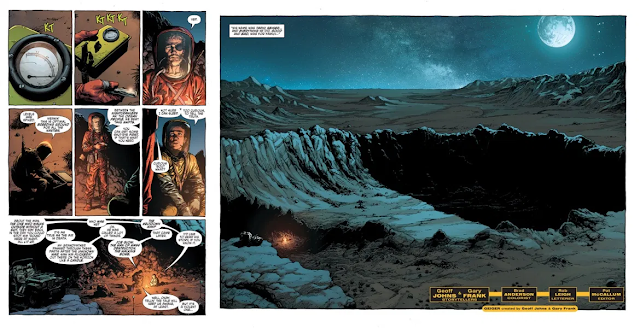 Gary Frank and Brad Anderson have already proven themselves to be a formidable team, so without having read a word, I knew I’d be getting a comic with stunning visuals. This dynamic duo more than delivered. Gary draws devastation and disintegration like no-one else, and when his line art is married to the cosmic gorgeousness that is Brad Anderson’s cosmic color pallet, the end result is 20 pages of perfection.

All in all, we get a comic that delivers. 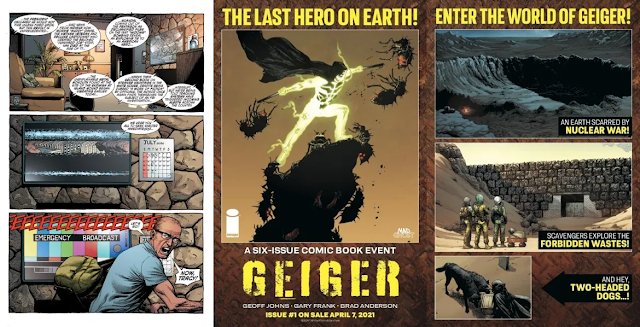 No, this isn’t the most original comic in the world, and I’ve already mentioned why. Yes, some of what we get in Geiger #1 has been seen before dozens of times… but I don’t care. When I saw the ads for this book, with a glowing skeleton man in a cape, I got a little worried. When I saw lines line “The Last Hero on Earth” I cringed. When I saw a post nuclear wasteland, a two headed dog, and radiation suits I almost groaned. Yes, these are all tropes that have been used ad-nauseum over the decades.

Then I read the book.

What we don’t see in the house ads is the heart, the love, the loss, the tragedy, or the triumph. 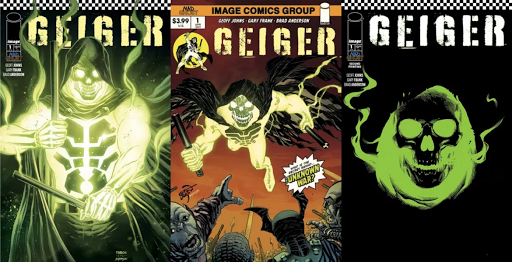 This is true. However, anything we get that combines, renews, and honors greatness, can itself be great. This issue is a tribute, an homage, and a love letter to comics and movies, created by people who love them.

Give me the war between a glowing knight, and a spoiled king, I’m all in.