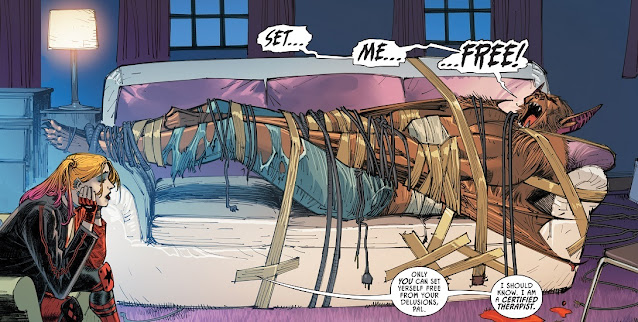 Man-Bat #3 gives us Kirk Langstrom getting his head shrunk by Harley Quinn, a Dark Knight that’s actually a detective, a new family member, and the final revelation of the true scope of the real villain’s plan. This mini-series is proving to be a worthwhile, and thoroughly entertaining read. 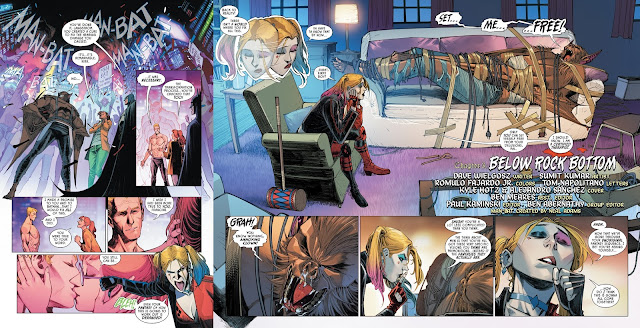 Dave Wielgosz is a clever writer. Batman appears sporadically throughout the story, but never in a way that overshadows the character whose name appears on the cover. Including the Suicide Squad last month, and Harley Quinn in this issue, should, hopefully, entice fans of those characters to pick this book up. Wielgosz’s handling of all his guest stars is impressive, as he clearly knows, understands, and loves them all. Again though, it’s clear that the star of this book is Man-Bat himself.

Sometimes limited series shine a new light on underrated characters, but others they just test the waters for the possibility of said characters receiving a bigger spotlight. More often than not though, they’re stories with grand ideas that almost never get followed up on. I truly hope that this series bears future fruit, because it shows a true love of the Batman mythos, and for the Langstroms in particular.

Once again the art team of Sumit Kumar, Romulo Fajardo Jr. and Tom Napolitano have delivered great visuals to accompany the terrific writing. The line-art and colors are really good, and we don’t get characters that look so similar we can’t tell them apart. The action is amazing, and the team’s takes on the supporting cast fits everything we’ve seen of these heroes, and villains, in all their previous appearances. Tom Napolitano’s lettering (particularly his sound effects, and the on-screen news articles) is always great. 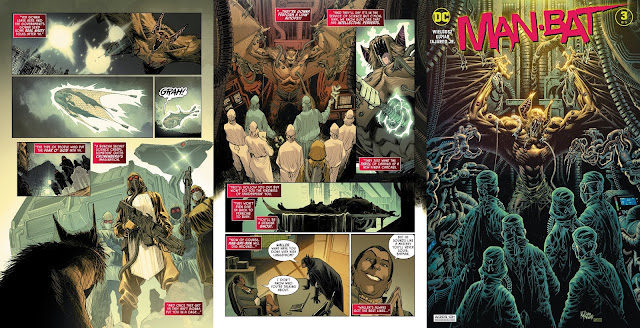 The creative team behind Man-Bat #3 is giving readers something that’s far more than just another mini-series. The introduction of (as far as I’m aware) a brand new member of the Langstrom family, but the one who seems to be the catalyst for their work, was a very welcome, surprise addition to this tale. I just pray that they all survive the series, as losing any of them would hurt.

We’re halfway through this story now, and I’m as intrigued and invested in it as when I first started. We know that Man-Bat will move on to becoming part of Justice League Dark, but his journey to that point has never previously been disclosed. Add to all that the return of Francine Langstrom, and the potential effects that being Man-Bat has had on Kirk – both physically, and mentally – and the end result has been a really great read.