Fan Retrospectives: Vision: Part 2: Everything Slips Through Their Fingers 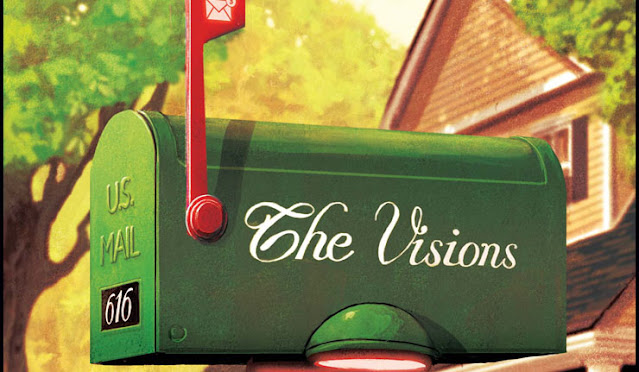 Writer Tom King and artist Gabriel Hernandez Walta created a strange premise for the old school Avenger Vision. They gave him a family. On paper, Vision with family hijinks sounds ridiculous and cheesy. But instead it turned out to be a haunting, character-defining master class on comic storytelling. Lets break down 2015's Vision series.

"Everything Slips Through Their Fingers"

The second chapter of Visions shows how the family unit really falls apart quickly after the Grim Reaper's attack in the previous issue. As the title implies, everything Vision and the family built is already slipping through their fingers.

When Virginia recounts the attack to Vision, she fibs some of the events. She purposely omits the part where she kills the Reaper and says that he escapes. Right off the bat, even though they are considered robots, Virginia is already doing a very human thing: lying. Meanwhile, Vin continues to go to school and try to act like everything is normal, when the reality is that he is falling into a depression. This is succinctly shown in a silent panel sequence where he literally descends into the floor. 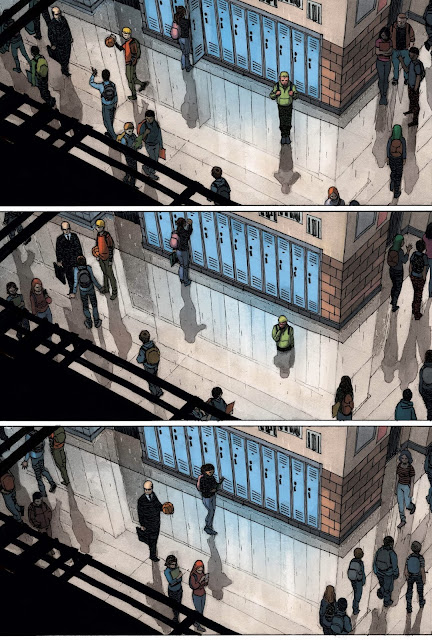 Side-bar: how great is Gabriel Hernandez Walta's storytelling here? If you pay attention, there are mini-vignettes  occurring around Vin. My favorite is the kids playing with a basketball and then the principal taking it away from them. It really shows how rich and filled the surrounding world feels. It also heightens the sadness of Vin's depression, since he is visibly hurt, nobody is helping him.

Vin's depression also manifest in anger and aggression against Viv's classmate CK. When CK insulted Vin, he chokes CK. While Vin has his emotional meltdown, he repeatedly says the same explanation of where Viv is: "My sister is out. She is ill."

Incidentally, the title of the issue is subtly referenced in Vin's actions. As he is being harassed by CK, Vin crushes an apple, while letting the broken pieces slip through his fingers, implying that his ability to control himself is already slipping away 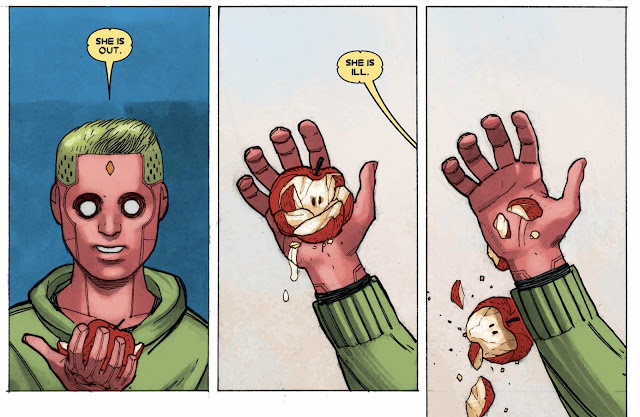 Characters repeating dialogue is a specific writing tic for writer Tom King. To be honest, I've roasted King on it during his Batman run more than once, where I find it more annoying than revealing about characters.

However in Vision, the repetition works to great effect, because one of the major themes is about doing repetitive actions that seem meaningless for the sake of appearing "normal". Of course, readers know that nothing is "meaningless" and every thing, including repeatedly saying the same word or phrases holds some significance.

Comics Alliance's Alex Spencer describes the repetition as "sampling", where it takes words, phrases, narrations, and even visuals and puts them into a different context. King uses sampling for different effects throughout the series.

Vin repeating the phrase, "My sister is out. She is ill." shows a lot about his emotional state. He is new to experiencing traumatic events, so he is reverts to just repeating the line over and over again in an effort to normalize it. However, there is nothing normal about seeing your sister get sliced in half by a super villain, regardless of whether you're a robot or not. So when Vin loses control on CK and chokes him, Vin continues to put on a false front that everything is normal, when the reality is much worse than he lets on. He is trying and failing to act normal. But more disturbingly, he does not seem to acknowledge how his rejection of the reality of the situation is literally hurting others around him.

Unfortunately, for Vision and Virginia, the principal does not take lightly to Vin's assault on CK. However, Vision lightly threatens the principal by stating he personally saved the world "thirty-seven times" over. 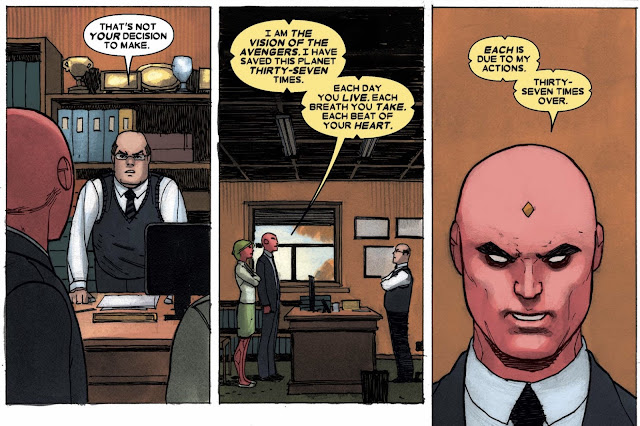 The phrase "saved the world thirty-seven times" will come up more as the series progresses. Here, Vision is stating a fact in a rather rude way. However, the phrase takes different meanings as it is repeated in different situations.

"Certainty is an illusion. Belief is a constant"

While Vision drops Virginia off before seeing the injured Viv, they discuss the fallacy the phrase "certain" and "luck".

Vision curtly explains, "Certainty is an illusion. Belief is a constant". 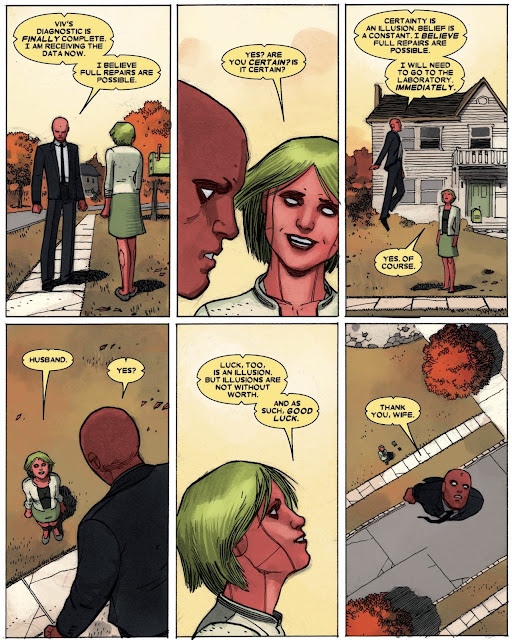 This statement is reflective of the family's dilemma. They all hold an idea that acting "normal" will lead to a certain goal. If they "act" normal, then hence they become normal. However, nothing can be further from the truth. The more they try to hold onto the normalcy, the more it slips through their fingers as the issue's title so aptly describes it. That is what happened to Vin while he attacked a student, this is happening here with other family members.

Interestingly, Virginia's response is, "Luck too is an illusion. But illusions are not without worth"

Her response can be taken in a couple different ways. Virginia is stating that "Luck is an illusion" which foreshadows how her character will frequently take matters into her own hands to achieve her goal.

She also says, "But illusions are not without worth." This also indicates that Virginia is willing to hold onto the idea that "acting normal will make her normal", even though it's fallacious thinking.

Finally, she wishes Vision "good luck", which is an odd thing for a literal-thinking robot to say. Wishing good luck implies that Virginia is slowly opening more of her human side up and in a small way acting irrational like a human.

This is paired with the narration stating how Virginia has felt joy in that moment, implies that the more human she acts, the happier Virginia is.

Unfortunately, that happiness immediately goes away as she finds a phone in her mailbox with a damning video of Virginia burying the Grim Reaper's body in her backyard.

After a brief moment of joy, Virginia's hopes of being normal literally slip through her fingers as her hand becomes intangible and the phone falls away. 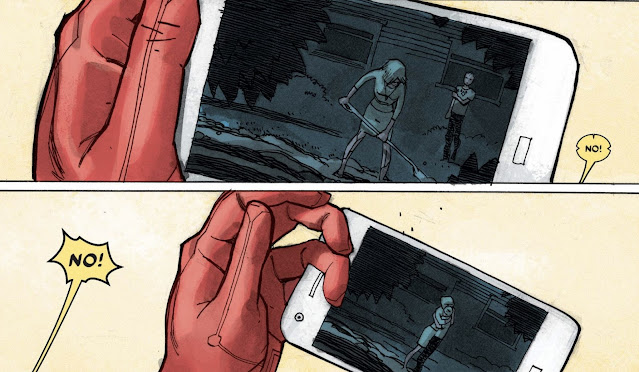 The ante is already ratcheted up a couple of times in issue two. Vin's outburst at school is a small taste of what potential destruction the Visions can do. And now Tom King also added a mystery element to the series. Who spied on Virginia burying the body? The intrigue and creepiness deepens in this chapter. Once again, all of this leads to tragedy in the end.