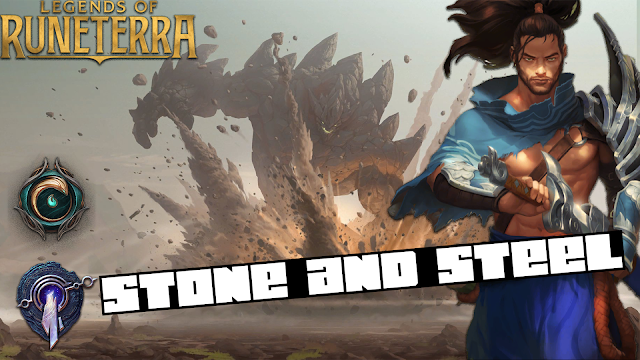 Guardians of the Ancient is the latest, and spiciest expansion to my favourite digital card game. The regions of Ionia and Targon got many new toys alongside the great time mage Zilean bringing an enigma to Shurima. The somewhat blocky Champion Malphite has sparked a few different to be built. The other Landmark synergy champion pairs very well with Taliyah, with his consistent stuns to let your Rockbears close the game down. I walk a different, sexier path.

I will never say no to a bit of Yasuo. The build around of the Stun Mechanic has had a lot of trouble finding his way into a competitive deck, which is a crying shame simply because he's just so edgy and hot. Having a large friend that generates an immense, mass stun would be a very quick way to level Yasuo, while pairing him with Targon, a very good region for the deck style.

I've played quite a bit of Yasuo with Leona, and honestly Sun Stun may still be the stronger variant, but new Champs who also work as another way to close the game is kind of essential. That said, this is my take on pairing Yasuo and Malphite...

Many new cards have made their way into this deck, and the synergies are abound. The core of the deck was something I found on Twitter, but have heavily tweaked.

New card Eye Of The Ra-Horak works so well in this deck. It contributes to two-fifths of Yasuo's Level Up by stunning two little guys, and five sixth's Malphite's level up by generating 10 mana's worth of Landmarks.

Blue Sentinel provides ramp that's essential for a mid game in a Targon deck in the form of a 2 mana Landmark.

Startipped Peak is another cheap Landmark with a reasonable shot at providing Crescent Strike.

Ground Slam may need to be Concussive Palm, to synergise with Homecoming, but it's place to deal damage on top of Yasuo hitting things may mean it's able to take down things far larger than otherwise could be killed by this effect.

Solari Sunhawk blanks an aggro attack early, whilst stopping something that could tangle with our Champions late.

The suite of Ionia and Targon control cards give you the staying power to win out against anything faster than yourself.

This is the deck I'm going to start the season with, with the confidence that I can finally get some play in with Yasuo. You can see me playing this deck on my channel, The Hostile Atmosphere.