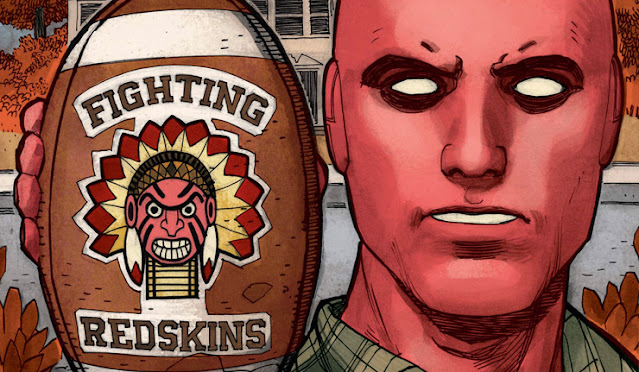 "Balls in the Air"

Our next episode of Vision seems to be more light-hearted than the previous chapters. Viv is back, Vin and the rest of the family is in a better mood. But there are secrets brewing underneath.

The opening scene is Vin and Viv playing football. Apparently, Viv is experiencing her inverted version of the "Peanuts" football dilemma. Her brother is preparing to kick the ball that she is holding. However, every time she does it, he phases and does not kick the ball as a joke.

Vin pontificates on how she needs to "trust him" and that "trust" is a pure act of faith, which he considers to be a major step in being humans. 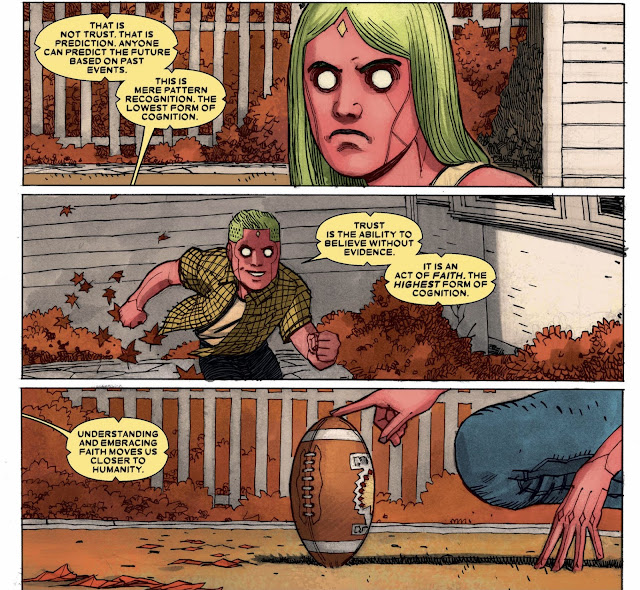 I personally don't agree with Vin's definition of "trust". Trust is a mix of both past events and faith. However, it is interesting that he considers faith to be the highest form of cognition.

Some may see Vin's assessment of faith as commentary on religion. Like, to Vin creating deities and then basing one's life choices around it with little to no evidence of its existence is the highest form of cognition. On the one hand, it does take a lot of higher-level conceptual thinking to create an invisible being with rules. From an outsider's perspective, it seems that it is extremely foolish, if downright illogical. But to Vin, being illogical and human is the same thing.

This refers to the idea that Vin and the rest of the family believes to be human is to be illogical.

Anyways, Vin ends up being a jerk and phasing through the ball again, much to Viv's chagrin. Vision spots the ball and is troubled by the racist Native American mascot on it.

Native American Racist Imagery and the Illusion of Change 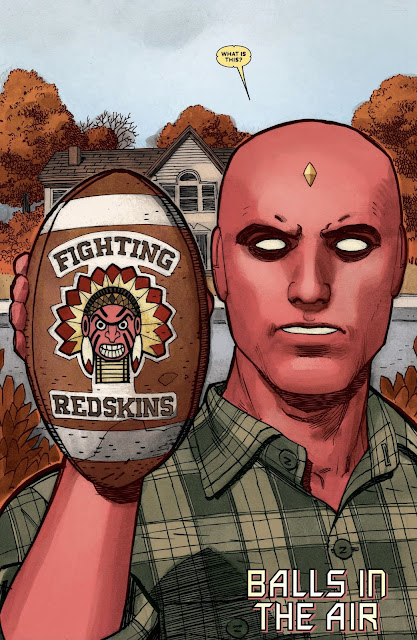 Apparently the "Fighting Redskins" was the former mascot of Vin and Viv's high school. The school recently changed it to the less offensive bull but hasn't changed it on all of their products, hence the football with a racist red-faced caricature on it.

Vision simply scoffs and retorts, "They change, but they do not change."

There is something to be said of the famous superhero comic book adage, "People do not change, the but illusion of change". Change requires totally abandoning some concepts and ideas that may be considered offensive or archaic. "Illusion of change" is the appearance of abandoning archaic ideas, but secretly keeping those ideas and/or reversing the change later on. 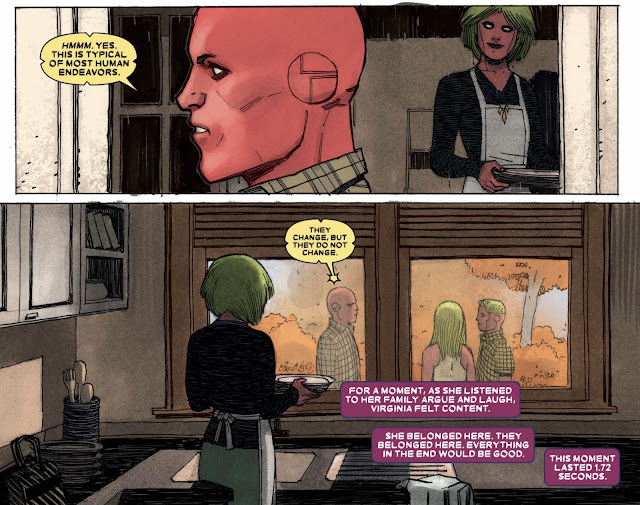 In Vision's case, he relates to the racist red-face Native American image. People claim that they accept Native Americans and other races, but still secretly harbor racist ideas or prejudices. Humans around the Visions claim that they accept him and his family, but the series shows that most of them secretly hold prejudices against them for being robots.

Balls in the Air

When Vision throws the ball, Viv catches the ball by phasing through Vin. When he screams that wasn't fair, Viv shoots back, "Now brother, fairness is simply mathematically determined balanced, the lowest form of justice. Pre-eminence, however, is the assertion of complex covenants over instinctual norms. The highest form of justice. Understanding and embracing preeminence moves us closer to humanity." 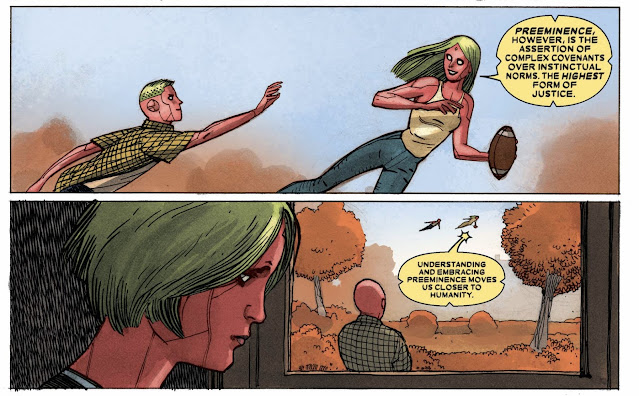 While Viv was joking, her words foreshadow the ultimate thesis of Vision. Ultimately, it is foolish to hide one's true abilities or powers in an effort to pretend to be "normal" or human. The Visions are phasing, hyper-intelligent synthezoids that fly. Let them fly.

Incidentally, that is one interpretation of the issue's title "Balls in the Air". Vision insists he does not want the kids flying while playing football because it is not normal. But his insistence is also artificially restraints the family and puts unnecessary pressure on them.

Like how Virginia goes through so much trouble to appear normal by literally burying a body. And now she is restrained by a secret that a blackmailer is out there.

Notice how artist Gabriel Hernandez Walta visually portrays how disconnected Virginia is from the rest of the family. While the Vision, Viv, and Vin are in the outside with warm autumn colors, Virginia is physically cut off by a wall and enshrouded in the shadows.

The shadows represent her being the only one of the family holding a secret. Just then, her blackmailer calls her to arrange a time and place to meet.

"It Goes Through Me"

Vin and Viv both return to school, but this time they're met with suspicious stares. However, not all of their peers are wary. Viv's lab partner, CK has taken a shine to her. They walk together and CK openly mocks how his parents forbade him from being lab partners with Viv and that his parents are "talking without understanding".

When asked if the rain bothers Viv, she simply states, "No, it does not bother me. It just goes through me." 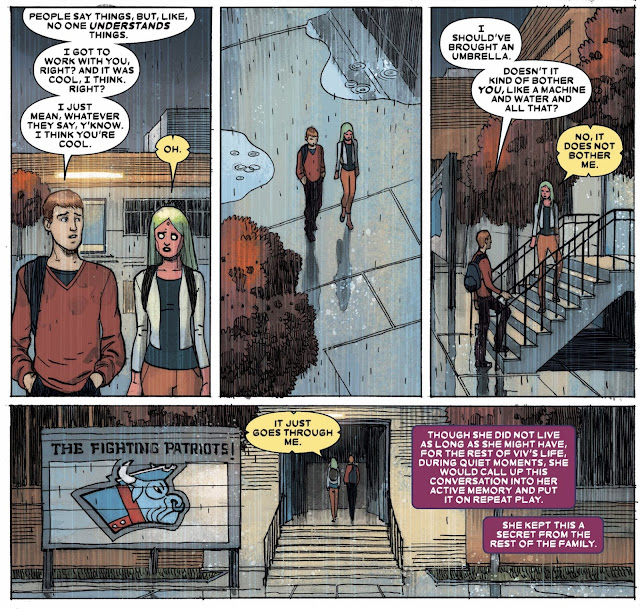 That statement has a double meaning. Literally, Viv does not feel the rain because of her phasing powers. Figuratively, she's also referring to her feelings and of other peoples' views of her not bothering her.

Repeatedly in the series, Viv appears to be the most emotionally balanced family member. Vin becomes more morbid as the series goes on. Virginia has an inferiority complex. Vision is blissfully unaware of his family's emotional problems.

How Far Do You Go to Maintain Normalcy?

Later that evening, Virginia lies to Vision that she's going to have a meeting with a club. But secretly she is meeting with her blackmailer: CK's dad.

What's amusing is how surprisingly cordial CK's father is to Virginia despite blackmailing her. He invites her in, shows his gun as a mild threat, and then asks if she wants any cookies. The cookies here symbolize a human way of "welcoming others". 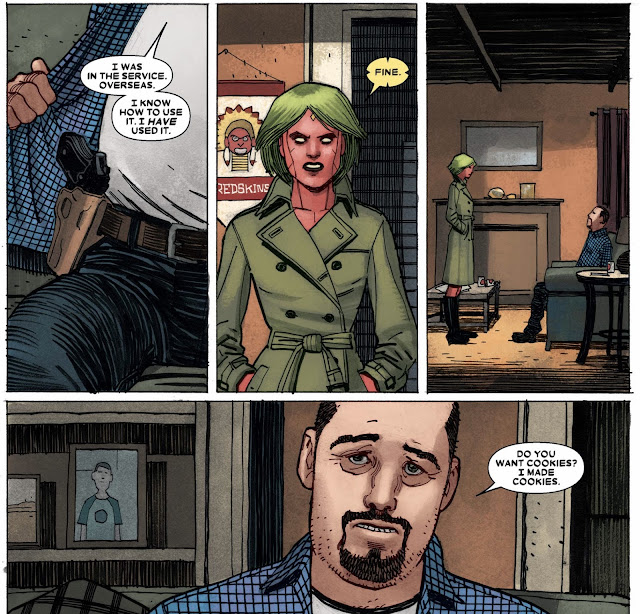 However, it's ironic, since CK's father tells Virginia that he wants the Visions to leave. Virginia does not respond well to the demand and insists, "We belong here".

"We belong here" is a sentiment that Vision has subtly imprinted onto his family. They belong in the neighborhood, hence they need to act normal. But Virginia takes it a step further. She will do anything to maintain normalcy.

Unfortunately, CK's father draws a gun towards Virginia and takes a shot at her. She phases, but the bullet goes through her and accidentally kills CK, who came downstairs when he heard a commotion.

Now blind with rage, CK's father screams that he's going to kill them all. But Virginia punches him, knocking him out cold. Meanwhile, CK's blood from the gunshot is spread all over the high school's old mascot of the racist Native American caricature. 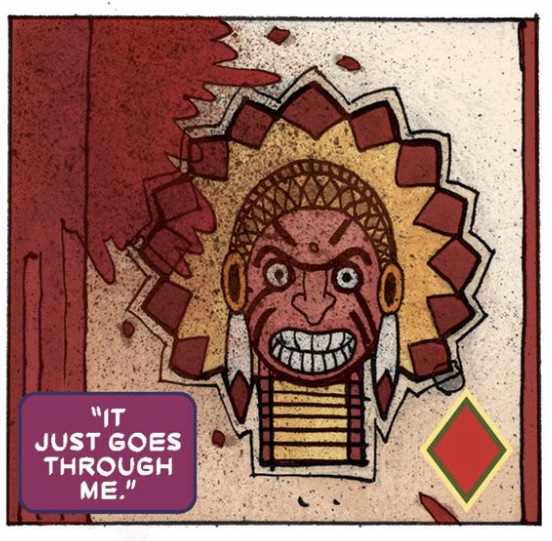 Tom King punctuates the tragedy of the scene by replaying the conversation from earlier between CK and Viv in caption boxes. But in typical Tom King fashion, he twists the conversation to be ironic now.

"People say things, but, like, no one understands things." CK's words take on a new meaning as we see Virginia and CK's father about to fight. Furthermore, it speaks on Virginia and her motivation's for the entire series.

She says she wants to be normal, without truly understanding what it means to be normal. Due to that, she becomes more and more enmeshed in violence and death.

This chapter really starts crystallizing the Visions as distinct characters based on how they react to things. It is becoming more and more clear that Virginia is unhinged and coming apart as she continues to do more to protect her family.
Meanwhile, Viv is shaping up to be the most interesting of the family members. She is the one who has the healthiest emotional relationships with others, which makes it sadder that CK gets killed later in the issue.
Creating these different personalities not only gives more conflict between the family members but also makes them all more memorable as characters.
Perhaps the only regret about this issue is the use of the Native American red-skin as a metaphor for the Visions' struggles. While it thematically makes sense, it also feels a little disrespectful to compare an obviously fictional conflict with the continued oppression of Native Americans in America.