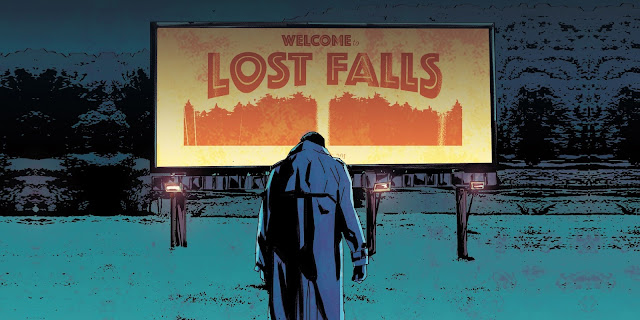 Acclaimed writer Curt Pires (YOUTH, Olympia) does it again with the new mystery thriller Lost Falls, a comic book series with art by Antonio Fuso and Pierluigi Minotti, colors by Lee Loughridge and letters by Micah Myers. Announced earlier this year, Lost Falls #1 (of 4) arrives on August 3, 2021 from comiXology Originals, the exclusive digital content line of comiXology, an Amazon company. 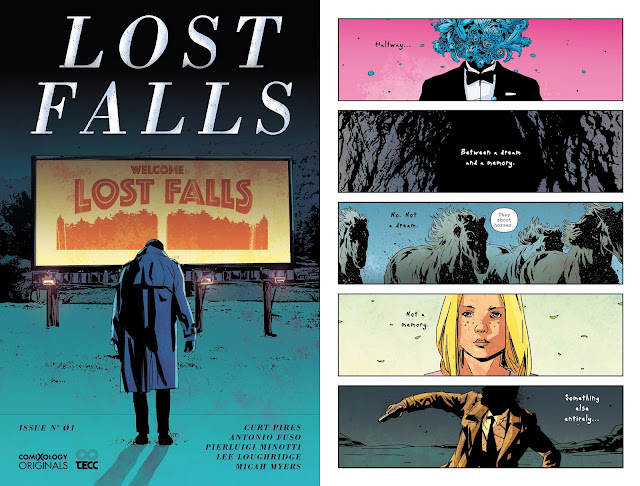 While investigating the case of a missing girl, detective Daniel Pynchon wakes up on the shore of Lost Falls, with no recollection of how he got there. As he struggles to piece together the events that lead him there, he investigates the phenomenon surrounding his memory loss and the town itself. He soon discovers horrors both human and otherwise.

This socially minded mystery thriller is the latest collaboration between Curt Pires and Antonio Fuso, the creators of WYRD, soon to be a show on FX starring Matthew Rhys.

ComiXology Originals titles are available at no additional cost for members of Amazon Prime, Kindle Unlimited, and comiXology Unlimited, and for purchase on the Amazon Kindle Store and comiXology. Prime Reading offers all Amazon Prime members a rotating selection of over a thousand top Kindle books, magazines, short works, comic books, children’s books, and more – at no additional cost. Kindle Unlimited gives customers access to more than 1 million titles, including thousands of audio books, and current magazines for just $9.99 a month with a free trial period at amazon.com/kindleunlimited. ComiXology Unlimited offers over 30,000 comics, graphic novels and manga for just $5.99 a month with a 30-day free trial at comixology.com/unlimited.

For more updates on comiXology Originals, check out http://comixologyoriginals.com. 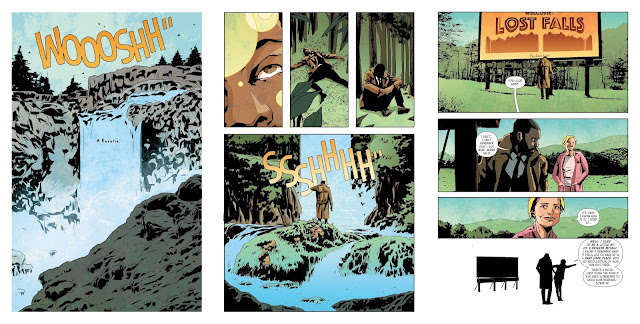 Curt Pires is a writer, producer, and creative that splits his time between Calgary, Canada and Hollywood. His series OLYMPIA (co-created by his father Tony Pires) is published by Image Comics. His other creator-owned series include WYRD (Dark Horse Comics), POP (Dark Horse Comics), The Tomorrows (Dark Horse Comics), and The Fiction (Boom! Studios). Pires is the founder of TECC CONTENT, a disruptive transmedia production studio that has worked with clients such as Amazon, Picturestart, and Fox / Disney as well as many others. Lost Falls marks Pires and Comixology’s third collaboration with much more to come.

ComiXology, an Amazon.com, Inc. subsidiary (NASDAQ:AMZN), is a revolutionary, cloud-based digital comics service. With content from over 125 publishers as well as thousands of independent creators from around the world, comiXology provides an unrivaled library of comic books, graphic novels, manga and bandes dessinées. The company’s first-in-class innovations include Guided View technology which provides an immersive and cinematic reading experience and a monthly subscription service. ComiXology is based in New York City, with operations in Seattle and Los Angeles. For more information, visit comixology.com and follow the company on Twitter, Facebook, and Instagram.