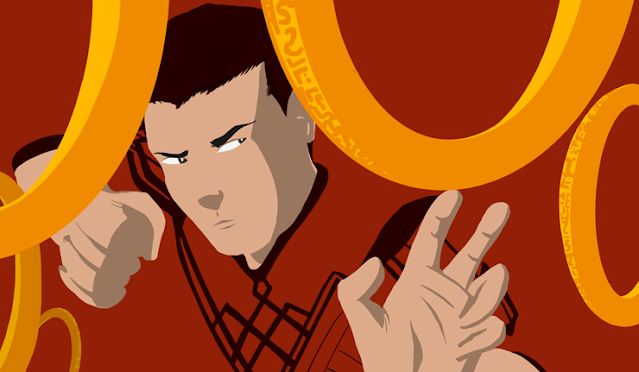 Review by Eric Lee
Last week, my Chinese immigrant in-laws stayed at my place and we watched "Shang-Chi and the Legend of the Ten Rings" together. It was an interesting experience.

Also, MAJOR spoilers follow for anyone who hasn't seen the movie!

My in-laws are not Asian American. They've lived in China for much of their lives and hold a very traditional Chinese belief system. On the other hand, I'm a 2nd generation Asian American. My grandparents were the ones who immigrated to the Bay Area, not my parents. So I'm two generations removed from my Chinese roots. I don't follow most Chinese customs. I don't speak any of the languages, and I don't even remember my own Chinese name.
That's why the two scenes that resonated with me the most in "Shang-Chi" were when the characters were conversing around mealtimes.
The first dining scene is at the beginning of the film where we see Shang-Chi (Liu) and his friend Katy (Akwafina) eating breakfast with her family in their San Francisco apartment.
Katy suggests that her grandmother "move on" from her grandfather's death. Katy's mother quickly retorts with a subtly-exasperated face, "Moving on is an American idea".
That hit me. You can tell that similar conversations about the two cultures have been repeated over and over again in their household. Katy's grandmother, and possibly mother, came from China and hold those traditional beliefs very tightly. Whereas Katy and her brother are steeped in American culture. While ultimately Katy's mother relents and drops the subject, the disappointment still lingers.
This is not unlike the conversations that plagued me as a child when I visited my grandparents' home. Just like the family in the movie, they too also repeatedly expressed disappointment at my disinterest in being more "Chinese" and, just like Katy's mother, they ultimately ended up dropping the subject.
Contrast that with another similar - but strikingly different - meal scene that occurs about halfway through the movie. Shang-Chi, his sister Xialing, and Katy have a traditional Chinese dinner with Shang-Chi's father, and the main villain Wen Wu, played by Tony Leung.
Immediately, Wen Wu is much more confrontational, calling Katy "American girl" and asking what her Chinese name is. Wu then launches into a discussion about how names are important.
"Names are sacred [sic], they connect us not only to ourselves but to everybody who comes before."
Oof. As someone who doesn't remember my own Chinese name, that line was a real gut-punch.
While he's ultimately villainous, Wen Wu is not wrong on the importance of knowing all of your cultural heritage. It's a part of you and it's a little sadder when that piece is not acknowledged. While this isn't a new revelation for me, "Shang-Chi" certainly crystallized.
This idea of locking away parts of your identity is also embodied in the hero's personal character arc. While he doesn't necessarily struggle to synthesize his Chinese side with his American side, he does struggle to accept that he's both his father and mother's child.
The movie's thesis about identity, whether it'd be cultural or otherwise, is emphasized by Michelle Yeoh's Ying Nan:
"You are a product of all who came before you. The legacy of your family, the good and the bad. It is all a part of who you are."
Identity is only fully realized once you acknowledge and accept your entire background. It's a powerful statement for Asian cultures who heavily emphasize respecting elders and the past, but also to Asian Americans, like me, who are caught between two wildly different belief systems.
The movie does a wonderful job of illustrating that conflict. There's a very literal scene where Shang-Chi is in a tug of war with his father with the titular power rings. One side is blue, representing Wen Wu's cold and uncaring demeanor. The other side is warmer red, representing Shang-Chi's mother's more nurturing influence.
In the end, Shang-Chi does accept both sides of his heritage, as represented by his varying martial arts styles in the final battle. Not only does this give him inner synthesis, but it also allows him to control the Ten Rings and defeat the Soul Sucker monster. He is now whole because he's tapping into his fullest potential.
Back to my in-laws. After the movie ended, my father-in-law briefly said "Good" and left the room. I don't really know if he has any other thoughts about the movie beyond that. I can't communicate with him well, since he primarily speaks Chinese and Spanish (which is a different story for another time).
At least to me, Shang-Chi's journey to find his cultural and familial identity speaks to me and my personal journey. I don't know where I'll go, but I will at least always hold the importance of embracing both sides of my Chinese heritage.