An Uglies Retrospective: A look back at Scott Westerfeld's groundbreaking series. 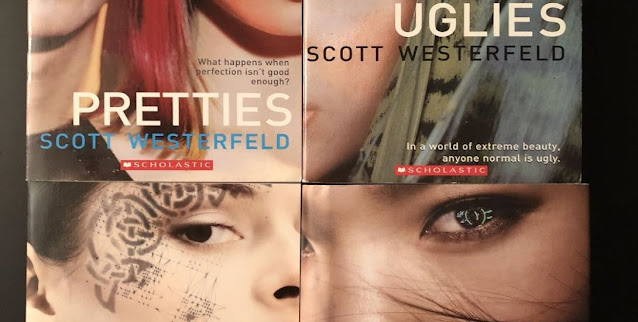 Way back in 2005, (I’m old, so it seems like just fifteen minutes ago) a guy from Texas who lived part of his time in America and part of his time in Australia, kicked the doors in on what Young Adult science fiction could be. The man was Scott Westerfeld. The first book, of what started as a trilogy, that grew to a quartet and somehow ended up being an octet, was called Uglies.

I would love to say that I was first in line on the first day, but I wasn’t. I heard about it through some of my students at the same time one of my daughters heard about it from friends at her school.  He sold the first three books as a trilogy (Pretties and Specials) and they came out in pretty quick succession.

The trilogy takes place in a world where a climate crisis happened and some cities survived by creating a Logan’s Run meets Ayn Rand’s Anthem world where the nanny state is very real. Children are all born “Ugly” and on their sixteenth birthday they become “Pretty.” That really means, they are born normal. They look like normal people who have flaws and might be thin or chubby or somewhere in-between. They might have crooked teeth or they might be short-sighted. All of those things that made people unique would be wiped away and they would be physically altered at 16 to look like whatever the city determined was “beautiful.” There was a genetically modified police force called the “Specials” who kept things in line because utopias are often dystopia.

The star Tally Youngblood and her best frenemy Shay join The Smoke, a group of rebels in the woods who have decided that being natural was way better. Revolution ensues. I’ll leave it there. No spoilers. I’m getting goosebumps just writing about this. I freaking love these books. 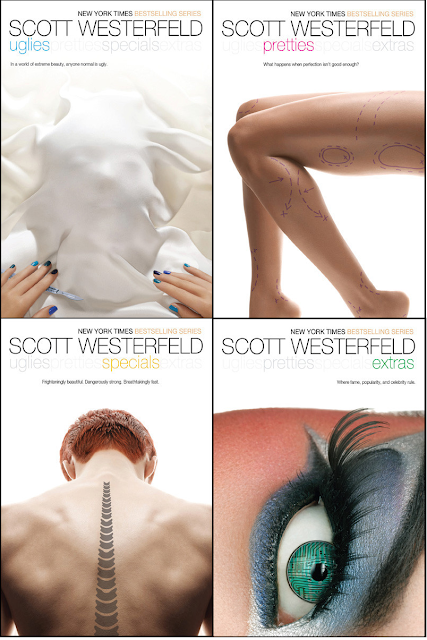 By the time we finished the whole trilogy was out and the announced fourth (named Extras which is totally meta and on the nose) was soon to come. We couldn’t wait. It was only because we had his back catalog of other spectacular books to read so we managed to keep our cool and wait “patiently” for, what were told at the time, would be the final book in the series. To be fair, Extras does have a satisfying ending and ended up being my favorite book of the first four books, so if that was it, we would just wait to read whatever he produced next.

We did just that. We read whatever Scott put out. As a family, we traveled to a talk and book signing he did at the Ann Arbor Public Library. Scott talked about the second book in his Levithan series, took questions (two of our girls asked and were answered), and then signed books. I had him sign his short story in the Zombies Vs Unicorns collection and I got his wife, the editor of said book, and an excellent writer in her own right, Justine Larbalestier, to sign as well.

We, as a family, found an author we all loved and that was pretty exciting. We have some shorthand jokes about his books and we are always fascinated when we see the things he invented pop up in the real world. He essentially predicted everything that would happen with social media in the pages of Extras. Facebook and Twitter were babies and Instagram had yet to be invented, but Westerfeld sent out a HUGE warning about how these services would be used and how they would proliferate.  (As a side note, Justine invented the iPad in her brilliantly crafted, totally quotable, and insanely funny How to Ditch Your Fairy. Maybe they are time travelers).

Then in 2012, Scott surprised us with two graphic novels that re-told the first two books of the series from Shay’s perspective. Wooo! Much rejoicing. We were thrust back into our favorite science fiction world and we couldn’t be happier. We considered these books just a blip, a reward to the fans. They were excellent, but that would be the end of the series. Right? 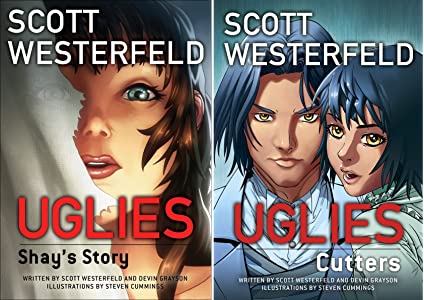 OF course not. Scott knows you can’t keep a good story down. In 2018, he announced that he would write four more books set in the Uglies-verse. This time, the series was called Imposters and the main character wouldn’t be Tally or Shay, but a young girl, an “extra” sister, called Frey, who spent her life in the world that Tally and Shay wrought. Utopias don’t seem to last and people are often terrible. A new dystopia was made where people were being spied on all the time. Cities have sentience and manipulate the people who created them.  No spoilers here either, but this series is so good.

Now, here we are. In April of 2022 the final Imposters book, Youngbloods arrives on shelves. I had the pleasure of getting an advanced copy so I could do the audiobook review for Audiofile Magazine. (I reviewed all four books actually) and I am happy to say, that if this is the end of the series, I will once again be thrilled. Scott pulled no punches in this series. Just like the original four, and the two comic spin-offs, not everyone makes it to the end. He has never been afraid to kill off a beloved character or two. There are stakes and that makes the unreal seem real. 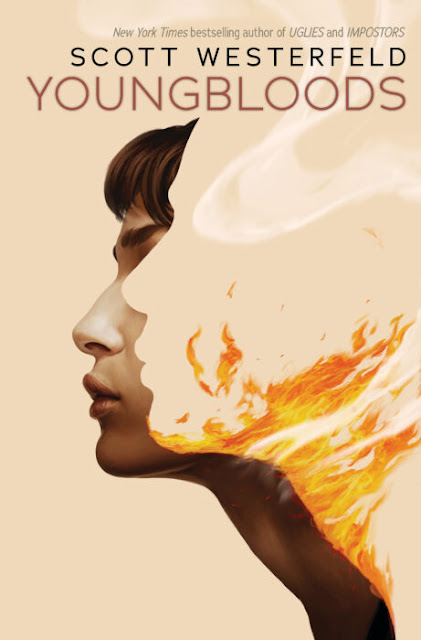 This series deserves to be read and re-read. Go to your book store. Go to your library. Get these books. Read them. Talk about them. Love them.