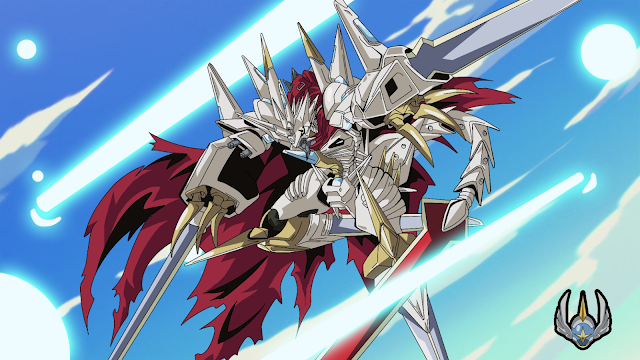 Article by Adam Ray
Digimon's latest expansion, BT-10, Xros Encounter has landed. The new cards to spend your Memory on is bringing a bevvy of new strategies and levelling up old ones.
In this new expansion, we also received Structure Decks 12 and 13. These decks are usually a very good pick up as an on ramp into playing Digimon. These decks in particular include a selection of heavily played Tamer cards, including the highly sought after Davis Motomiya from BT3.
My colleague will be looking at the RagnaLordmon deck in his own article, but right now we're going swear loyalty to Huckmon and Jesmon.
Digimon's Preconstructed decks are very good value in providing a decent number of playables right out of the box, often but not always, bringing whole play sets of the new cards. This deck tech is the easiest path for upgrading this deck, but expect further upgrade options at the end of the article.
Structure Deck 12 offers a full deck synergised around Huckmon and other Digimon with the Royal Knight subtype. The right mix of Red buff Options and a few strong Black effects allow you to pressure your opposition's Security and protecting your own team. 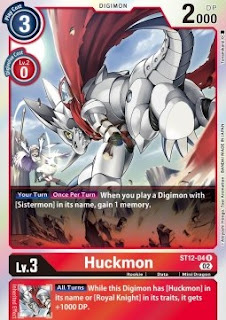 The core team consists of Huckmon and his evolutions BaoHuckmon and SaviorHuckmon. This synergistic team buffs other Royal Knight type Digimon throught inherited effects or playing the fabled Sistermon for free (we'll come to them later). The Rookie/Level 3 cards to build you up to these Knights include Solarmon which brings a welcome and disruptive tax effect. Candlemon has sadly flamed out, and won't make it to the final deck. 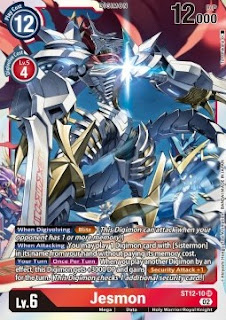 The top boss monster has his name on the box, the biggest Royal Knight Jesmon. His play style exemplifies both the Red and the Royal Knight design, by letting you play a free Sistermon from hand, and gaining stats and keywords consistently, as well as attacking fast and hitting two of your opposition's Security.
A lot of decks in more recent Digimon contain a small number of cards from a second or even third colour! The tiny bit of Black comes in with Gankoomon and QBFF. Sir Gank' brings a lot of Value and can be Digivolved onto a Red card, so the colours aren't too much of a stretch. The value of getting a free Huckmon or Sistermon from the Trash is great. The consistent De-Digivolve it brings is also very helpful if the game goes long and grindy.
The aforementioned protection for your Knights come from the types of damsels Knights usually protect. The Sistermon in the deck provide card flow and defence for your Knights. Sistermon Blanc let's you rummage while Sistermon Ciel picks up a Huckmon or Royal Knight in the top 3. Blanc brings the Decoy keyword while Ciel reboots them so they can't be attacked on your opponent's turn.
The deck's Option cards offer consistency. Aus Generics often amounts to a free pump spell that let's you get in for that multi card Security check and with your Digimon's survival ensured. From Master To Disciple is strong card flow that ramps your big Digivolves. Make sure your Solarmon has had a card placed over it, or that cost reduction effect won't be there. 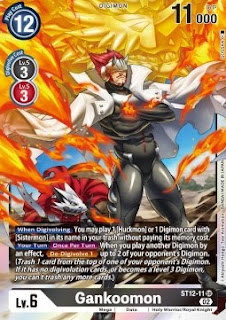 In all, this deck has the wonderful flavour of Royal Knights charging into battle with the fun fast paced gameplay that Red in Digimon applies. The only issue comes in consistency. Having a large section of White cards in the middle of your Red/Black does slow down how effectively you can Digivolve up into your big boys. They provide a good service but can make the deck feel a tad clunky.
There are many routes to upgrading this and the RagnaLordmon deck, but this is the easiest way in, grab two decks, shuffle them together, and you're set!
Now we want to hear from you! Have you tested yourself in the world of Digimon? Which online or paper CCGs would you like us to cover? Let us know on our social media or in the comments below. 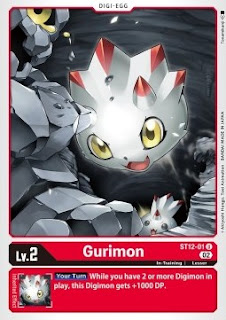