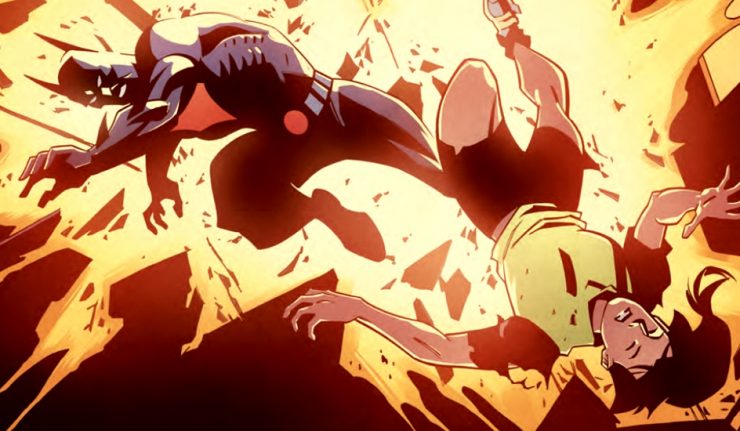 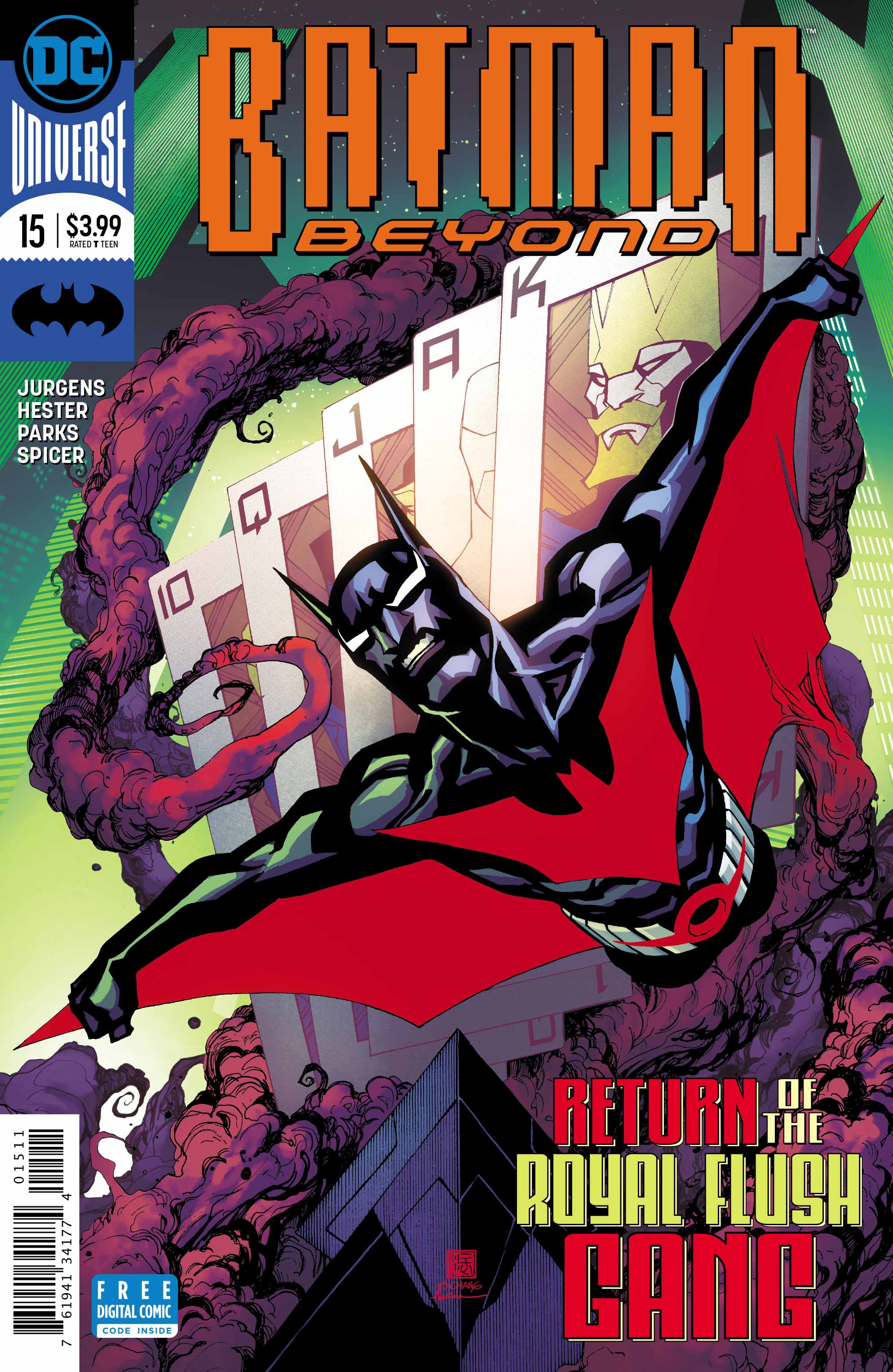 Review by Steve J. Ray
When last we saw young Terry McGinnis he was in a very precarious situation. Ace of the Royal Flush gang had him in his clutches, and was going full on “Knightfall” on our hero. Chapter Two of the Long Payback shows us the true value of dressing appropriately for the occasion.
As the time draws closer for the departure of Dan Jurgens from this title, my sense of anxiousness increases. Dan has shown a true love of this particular corner of the Batverse, alongside a gift for cliffhangers and their resolutions, that would make the creators of the 60’s Batman show extremely jealous. The preview pages show a smart, simple and elegant escape.
Please pick up the issue anyway, as there are still plenty of surprises on the pages that follow.
Once again the clean, and deceptively simple art of Phil Hester and Ande Parks works beautifully with Dan Jurgens plot and script. These two artists are seasoned professionals and master storytellers. I love the purity of their art, which so fits the characters and situations inspired by the classic animated TV show. 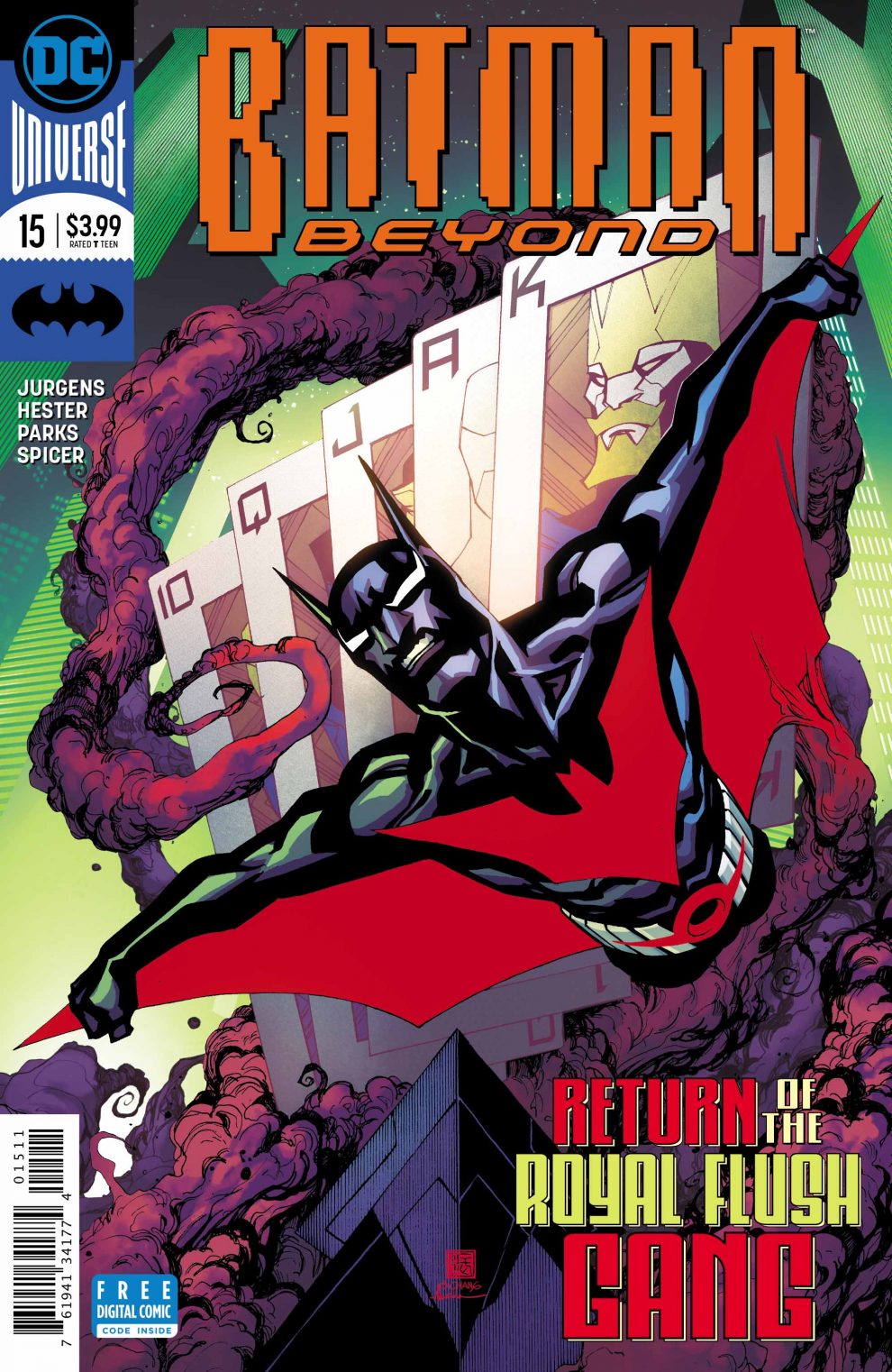 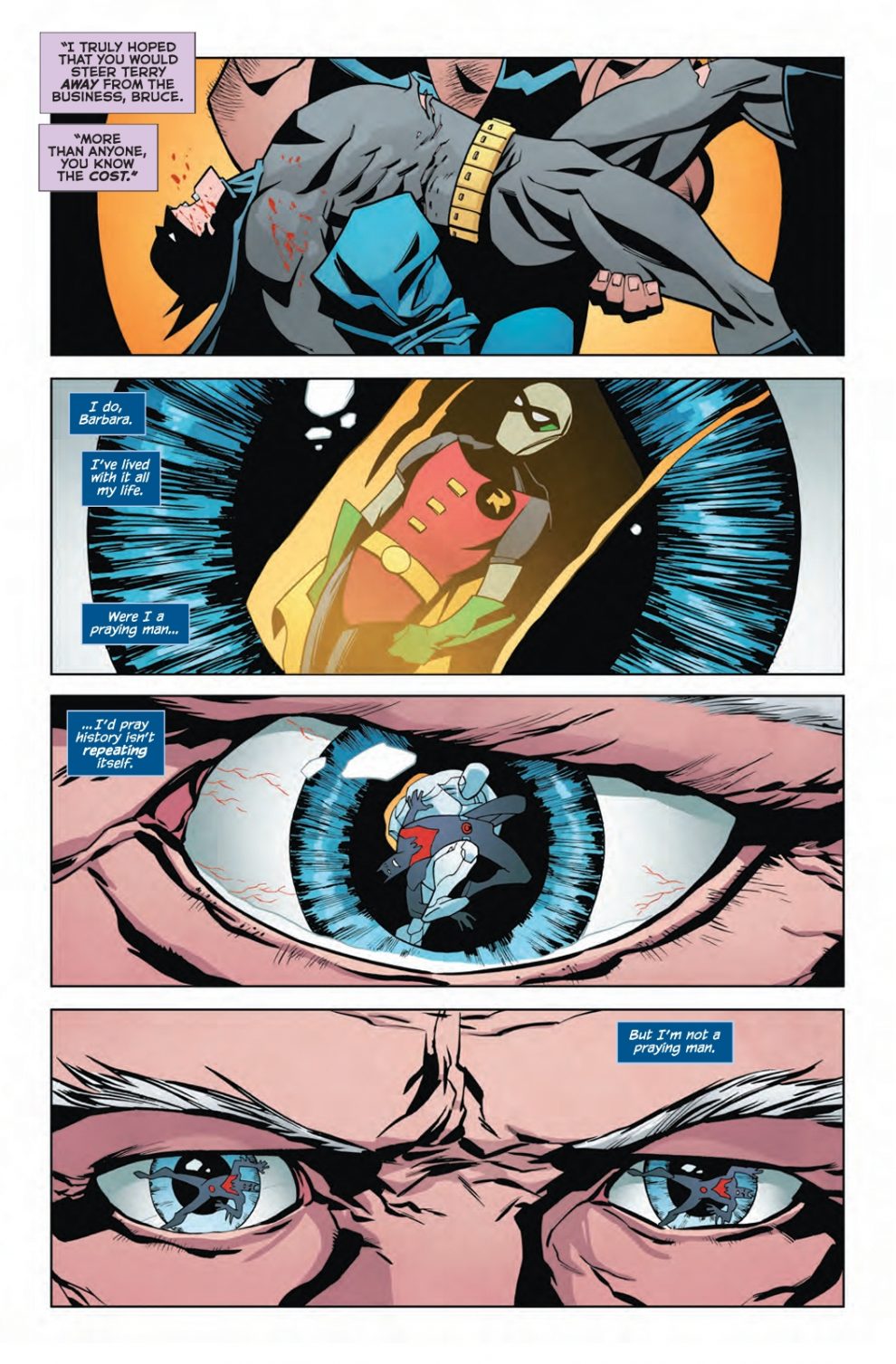 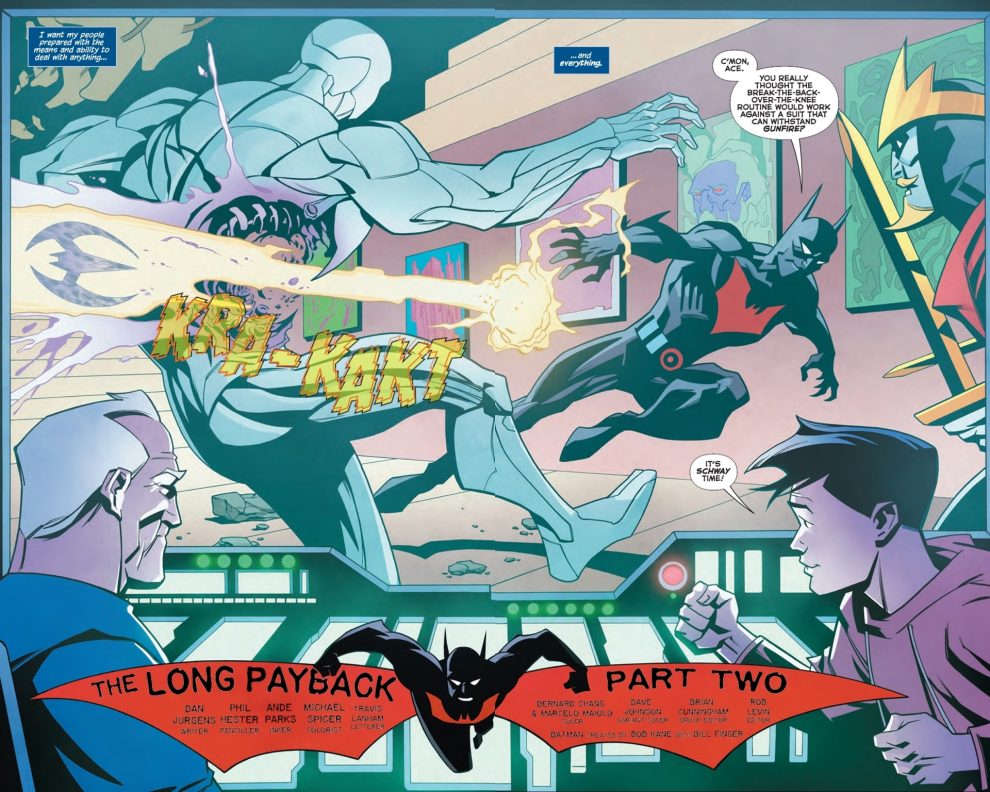 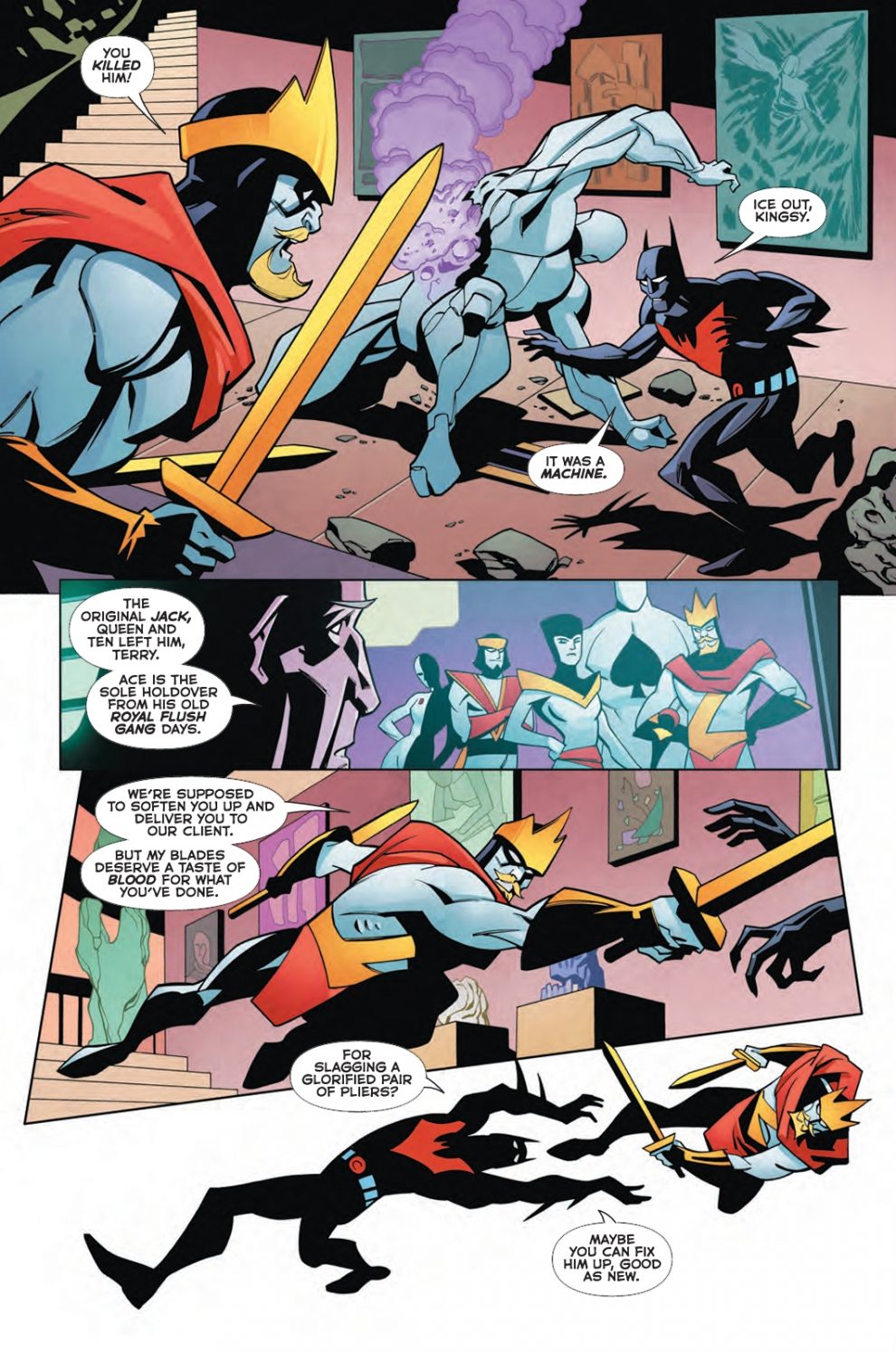 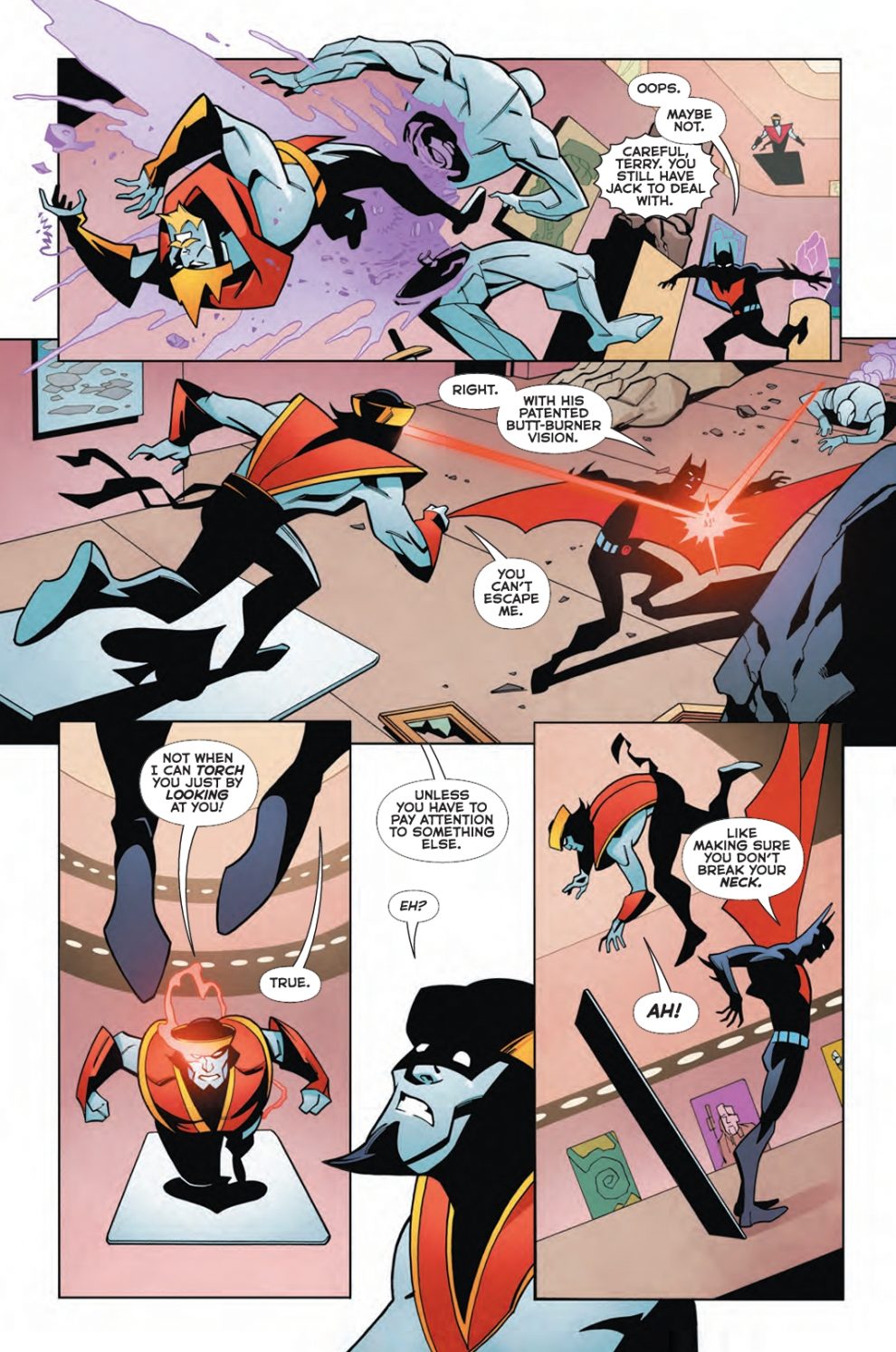 Michael Spicer’s colors add texture to the art, and are the best example of less is more that you’ll find in any mainstream comic. There are no flashy airbrush style, CGI flourishes here. Mr, Spicer is cleverer than that. He uses classic touches, reminiscent of the comics of the 80s and early 90s, and tools such as replacing blacks with muted colors to add movement and the feeling of motion to the action.
This is vintage Batman, classically written and drawn. Speaking of classic, another great reason to pick the book up is the resurgence of a brilliant character from the Batman Beyond show. Phil and Ande have subtly, yet impressively, redesigned the character. The re-imagining isn’t immediately evident, unless you’re as obsessed with these personalities as I am.

It’s great to see a team of absolute pros working on your favorite comics. I’d love to see this team handle any set of characters out there. Batman Beyond is pure, old fashioned comics entertainment at its best.