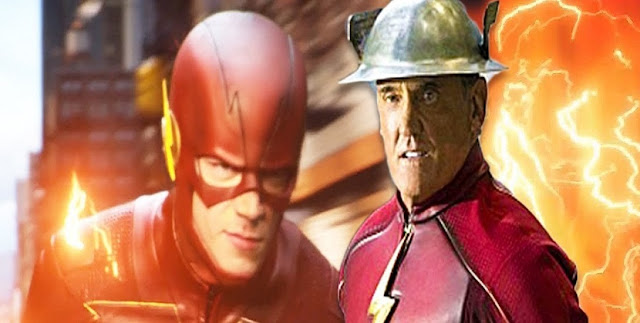 Review by Steve J. Ray
Wow! Talk about tense. This episode of The Flash is an absolute blast… literally! “Enter Flashtime” evokes classic silver age comics, modern movie blockbusters, and is a pulse-pounded thriller of an episode. When tied in with all the emotion, and character driven storytelling that we’ve come to expect from this show, we get yet another killer instalment.
I really feel blessed when it comes to my writing assignments. I’ve interviewed some T.V. superstars, I review some of my favourite comics titles, and I get to review The Flash every week, too! Talk about lucky.
15 episodes in, and season 4 of The Flash is proving to be arguably the best of its entire run. Without giving too much away, a threat hits Central City that could almost prove to much for even THREE Flashes to handle! Yes, you read that right, THREE FLASHES. This episode sees the welcome return of both legendary Flash Jay Garrick, played by the inimitable John Wesley Shipp, and Violett Beane’s Jesse Quick.

The way the episode is presented, with three speedsters running around trying to save a city, is beautifully handled. The premise and effect of “Flashtime” is an intriguing one. The show centres around en event so explosive, that it’s happening at a speed even The Flash can’t match.
I really felt worried, and nervous throughout the whole episode. In fact, it almost felt like a tense movie thriller, or one of the best instalments of “24”. What I love about Team Flash is they way they combat their threats using their brains. These aren’t punch now, think later heroes, these guys and girls are smart. The way the threat is handled taxes the minds of the team’s greatest thinkers, as well as the speed and stamina of the Fastest Heroes Alive.

Whereas tension is at the heart of this episode, it is also chock-full of emotion and character too. There are brilliant scenes between Barry and his team-mates, and some wonderful moments between Harry and Jesse. This series delivers incredibly well written, and brilliantly acted characters week, after week, after week.
While “Enter Flashtime” stands alone, it also keeps its fingers firmly on the pulse running through the season as a whole. DeVoe’s plan is revealed to go back for years, and the mysterious visitor, whom I have code-named Maths Girl, in Cisco-esque fashion until we learn her true name and purpose, is back too.
We’ve received a really satisfying chunk of action this week, but have also been left wanting more. This is truly great T.V.
(This Review Was Originally Published On The DC World Website On March 8th 2018)