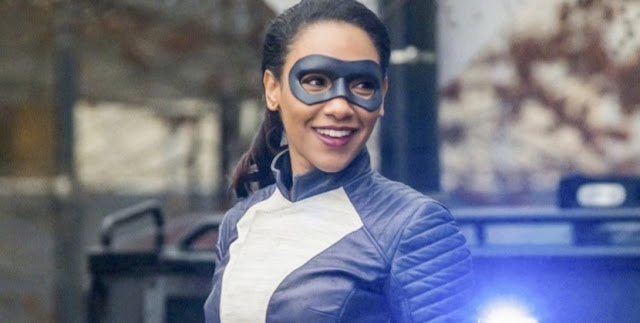 Review by Steve J. Ray
I came into “Run, Iris, Run” prepared to hate it.
There, I’ve said it.
I’ve been a comics fan for a long, LONG time. There are many things that I love about those lovely little, colourful treasures; action, thrills, character, chaos. There are also publicity grabbing stunts and ideas that I cannot stand. Foremost amongst these is giving non-powered characters meta-human abilities.
Images of Iris Allen-West in mask and costume have been circulating for months now. Seeing this led me to believe that one of my most hated comics tropes would be invading one of my favourite T.V. shows. This annoyed me before I’d even seen the episode, and continued to grate on me more and more, threatening to ruin a season which, so far, has been really, really good.
Break out the custard, as this particular writer is about to serve himself up a big slice of humble pie.
I was wrong… this episode was TERRIFIC!
Now, before everyone grabs their torches and pitchforks, let me explain. 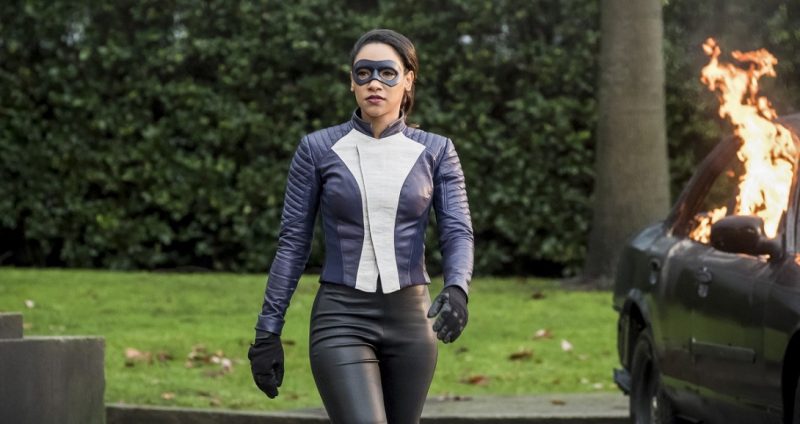 How can I defend yet another non-powered cast member becoming a meta, when I’ve stated that it’s something I hate? It’s quite simple, really.
As I stated above; I love comics. Caitlin Snow, Cisco Ramon, and Ralph Dibney are all super-powered in the comics. When I started watching the Flash, I knew that one day they would become Frost, Vibe and the Elongated Man. Iris West has been Barry Allen’s on/off girlfriend/wife for decades in the comics, and yes, she also gained powers for a while… and I hated it. The operative term here, just like in this episode is “For a while.” The super-powers were temporary.
This episode enhanced Iris’ relationships with both Barry, and Ralph Dibney. The temporary super-speed also helped Iris get back in touch with a part of herself that she thought she’d lost. I’ve missed her as a roving reporter, and felt that both actress Candice Patton, and Mrs. West-Allen were stifled being stuck at H.Q. in most episodes. Now Iris the action reporter is back, giving her even more depth.
Character development… I love it! 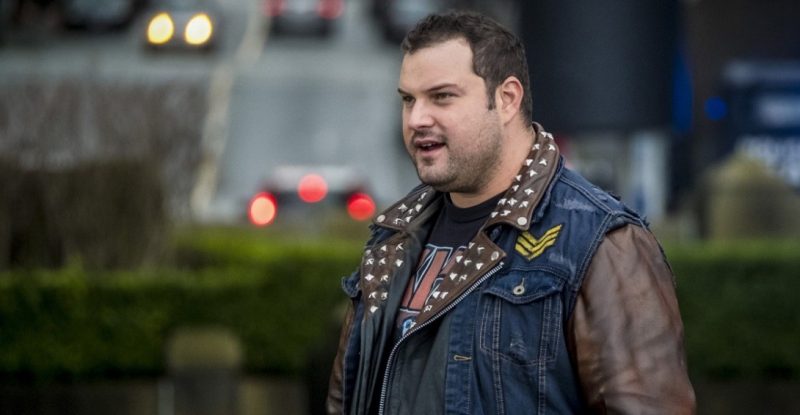 The Glee invasion continues! First Grant Gustin, then Melissa Benoist over on Supergirl. Next came Darren Criss  as  the Music Meister in the classic Flash/Supergirl musical crossover. Now we have Max Adler making his debut as villain Pyro… SMOKIN’!
This season has entertained me with action, scares, thrills… and laughter. In this episode alone we’re given a fire villain called Fry, and some of the finest quotes ever! Ralph’s “I’m Sarah Connor!” and two CLASSIC Cisco-isms “(Harry’s) trying to match his intellect with a madman, whose innovations are warping his brain. Have you not seen Spider-Man 2?!?” and “The minute you start acting like Locutus of Borg, and start assimilating everybody with your Borg chair…” Hilarious.
With the introduction of Melting Point, and his ability to give and take away meta-human powers, the enigmatic mentions of Edwin Gauss and Janet Petty, more intriguing questions are raised.
Gauss is well known in the comics as villain Folding Man. As for Janet? The CW have Flash character Null slated to be recurring character in the show, could that be Ms. Petty? Both characters have abilities which would tie in with DeVoe’s plans. Folding Man can see different aspects of reality, and travel between dimensions by folding space-time. This could theoretically either enhance The Thinker’s teleportation, or negate it. Null can affect and control gravity, a great ability to use against/counteract speedsters. Whatever the case, add in “Maths Girl” and I’m well and truly hooked.
I came out of “Run, Iris, Run” LOVING it.
There, I’ve said it.