It's a cold, wet, dreary morning as I sit on the bus heading to work, but I'm smiling and in a cheery mood. Why? Because I'm listening to Professor Elemental's "School Of Whimsy!"

For the uninitiated, Professor Elemental is the country's finest example of Chap-Hop Emcee. Marrying beats and rap, with a nod towards geek and UK culture. It's certainly more tongue in cheek than the likes of other rappers, but that is part of it's charm.

The Prof is one of us, a geek, someone who'd like to try and focus on having fun. Yeah, you can look deeper into the meanings behind the lyrics but, you know what, sometimes it's just about trying to put a smile on your face.

"School Of Whimsy" is the latest collection of tunes from the Brighton based rapper and he's dropping a solid gold set of tracks. The lessons here aren't maths, geography and the like. These are life lessons, learned from experience, by being there and doing that.

As often found with Professor Elemental's albums, there's a loose theme running through the songs. It's not as concept led as "Apequest" (which does tie in here but I'm not going to spoil it for you) but with a closing track that hints at... Wait, I'm getting ahead of myself. 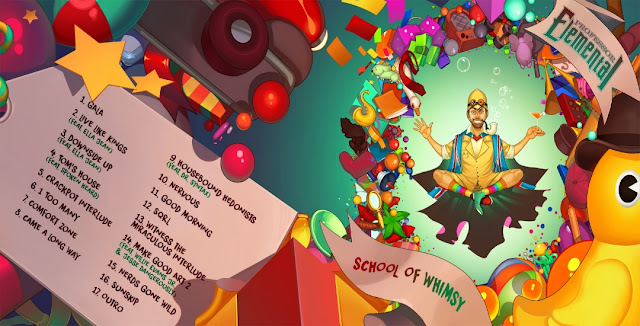 The album opens with 'Words From The Headmaster' as Professor Elemental spits out rhymes faster than Trump can turn off a nymphomaniac (ouch!). Then 'Comfort Zone' rocks up before he's had chance to draw breath. This is the tale of the life of a Chap-Hop rapper over the top of what sounds like a Django Rienheart gypsy jazz track, with added cuts from regular collaborator DJ Nick Maxwell. Pay attention to things that may seem like throwaway lyrics, like the Professor having a roast dinner. The album "Is like an onion, it has “Layers, donkey" to paraphrase Shrek.

'Downside Up' has a real sunny vibe to it, a groove that makes you wish for sunnier times with extra vocal flourishes from Ella Jean that just add that little bit extra to the song. 'Came A Long Way' tells of the Prof's touring tales, the good and the bad. It's a reminder that a musician's life isn't all great, but that you get out what you put in.

A strummed banjo and dub beat opens 'One Too Many' in which our hero tries to make life easier by making more versions of himself (has he not seen Mickey Mouse in Fantasia?!?). It nearly all comes to a sticky end thanks to Professor Zero, the complete opposite of our hero who's thwarted by...

Well, that would be telling.

After a short skit ('Crackpot') we head over to 'Jumble Sale', a reminder that looking to the past can have a massive influence, and shouldn't just be forgotten. It also features some guest raps from The Spoken Herd and finishes with someone asking if we'd like "Some old jazz".

'Nervous' deals with anxiety and how it's a lot more common than you think, whilst riding a funky jazz strut. The message that you should try and face your fears is strong in this one, reminding us that everyone feels something like that from time to time... from anxiety to a fear of clowns. It ends with good old Jeffrey (the professor's trusty orangutan butler)... well, wait and see. 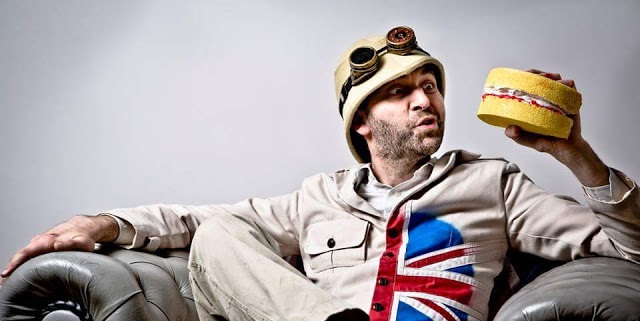 The benefits of holidaying at home is the theme of 'Housebound Hedonists', with a cheeky reference to his own tune 'Cup Of Brown Joy' (ten years old now, yet still the greatest ode to the humble cup of tea ever!) as Elemental trades verses with Dr Syntax. 'Live Like Kings' reminds us that it's the simple things in life that benefit us, not piles of cash or celebrity. The track culminates in a piano solo from Jeffrey before another spoken word interlude slips in on 'Witness The Miraculous'.

'Make Good Art Pt. 2' extols the virtues of being creative, how everyone who thinks that they're not good at something and will be discovered at some point. A couple of guest rappers (Willie Evans Jr and Jesse Dangerously) are bolstered by a sample of a veritable Geek God talking about taking what happens to you and using it to help you make good art. The track feels light in tone, but comes across as inspiring, despite it's whimsical nature.

'SQRL' is one of the few album's few narrative tracks and is hilarious. After finding his home burgled Professor Elemental discovers that thieving squirrels have been used to lure him into a trap created by something unexpected. You can only imagine The Goons or Monty Python coming up with something as suitably insane as this. I can't give higher praise than that! 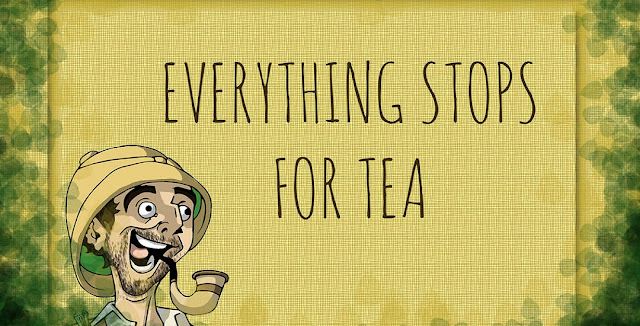 The aforementioned Geek God turns up again on the skit 'Everything You Need To Get Started' (I would love to see a meeting between these two men of creative genius) before dropping 'Tom's House', a tribute to the musical mastermind behind the Professor's beats. It saunters along over a Jamaican ska/rocksteady track that has you nodding your head along with it. It's further elevated by choruses featuring the sweet tones of Sabrina Jade.

'Good Morning' bounds along along like an eager puppy, dropping so many geek references you'll lose count, as Nick Maxwell throws in some pretty sweet cuts and scratching, thus reminding you that the album is about celebrating life and a love of hip hop, and it's not some cheesy cash in.

'Sunskip' is a relatively short instrumental that does exactly what it's title describes before leading the listener into 'Outro (Skit') which teases us with a gaggle of villains and possible further adventures for Professor Elemental.

Let's just say that I'm keeping this as spoiler free as I can, but I honestly can't wait for the next instalment! 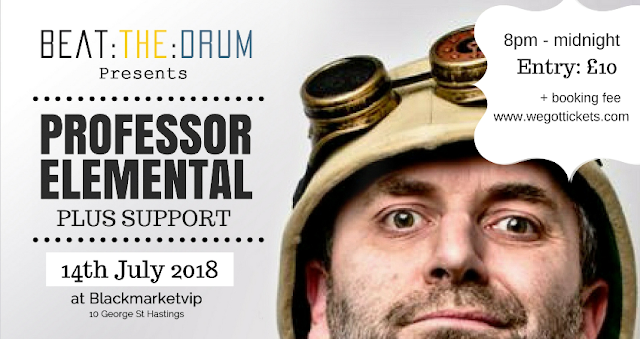 I keep looking for (a hatful of) sunshine to push through the grey skies here, but don't see any just yet. I have a feeling though, that if I keep playing this album that great weather will be summoned up very soon. Professor Elemental's world is crazy, cheery and full of fun for everyone. We could do with having a few more people like him around.

Rather than getting fed up with life's negativity, learn your lesson from the "School Of Whimsy." Enjoy yourself... and make good art!