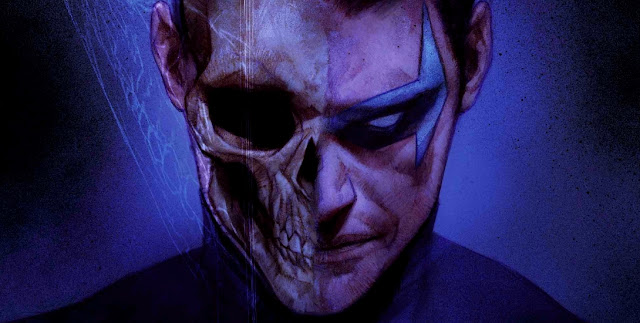 “THE BLEEDING EDGE: PART THREE” Dick Grayson has a really bad bug… literally. It’s making him sick to his stomach, and messing with his mind. Wyrm is on the attack, and he has Nightwing on the defensive. The one thing the technological terror hasn’t counted on, though, is that our hero has friends.
Enter the Burnside Badass, Batgirl!

As one would expect from Benjamin Percy, the issue is action packed. This entire subject matter is so in the now that one wonders how long it will be until real world technology catches up with comics; and our data, our lives, and our memories are stolen, misused and corrupted by our gadgets.
Social media hacks, celebrity smartphone privacy violations and people’s data being bought and sold are now scarily commonplace news items. The writer knows this, and is using the terrific platform of comic-books to share his fears, and fuel his imagination.
Peoples’ eyes – and it’s NOT just kids and teenagers – are glued to their screens, and phones seem to be surgically attached to folks’ hands these days.
Perhaps “Anti-social media” would be a more apt term. Human beings aren’t physically socializing anymore, they’re doing it over the internet. Most of us don’t see, or hug, or sit and eat with many of our friends and family any more. We interact over a screen, or via a keyboard. Scary.
I LOVE Dick Grayson’s password to the Bat-Bunker, though. Priceless.

Chris Mooneyham’s art continues to impress. From the looks of horror, disgust and anger on Dick’s face on the first two pages, to that brilliant crafty smirk at the top of page three. With all the action that follows, we see that Mr. Mooneyham is at the top of his game.
Klaus Janson is not just one of the all-time great comic-book inkers, but his style and Mooneyham’s wild, kinetic, scratchy and detailed art are a perfect fit for each other.
This month we have a double dose of legendary inkers, as Scott Hanna also makes his presence felt on these pages. Wowza!
Colorist Nick Filardi is on fire. Check out the washed out blues of Nightwing in motion, the crackle of ethereal greens for Wyrm and his avatars, right down to the light shining into Barbara’s bunker through an open door, after Batgirl and Nightwing make their escape. Great work.
A special shout out to letterer Carlos M. Mangual, too. I love Nightwing’s unique captions, and the fact that Wyrm’s speech bubbles are as strange and different as the villain himself.
Letterers need love too!

Nothing major, just one of my pet peeves.
Once again there’s a chunk of the comic that features a guest, or fill-in penciller on pages 7 -10 of the issue. Though the art is very good, my trained eye still spotted the difference in style.
Don’t get me wrong, penciller Lalit Kumar Sharma has done a great job, and the consistent inking style has made the shift less noticeable… I’m just an old fuddy-duddy that would like to see one issue drawn by one artist from start to finish.

A solid issue; variances in art notwithstanding. Great story ideas, lovely characterization and good images. The threat is one that I find engaging and the end of the issue has left me on edge for the next chapter.
The issue isn’t perfect, but it’s definitely pretty darned good.