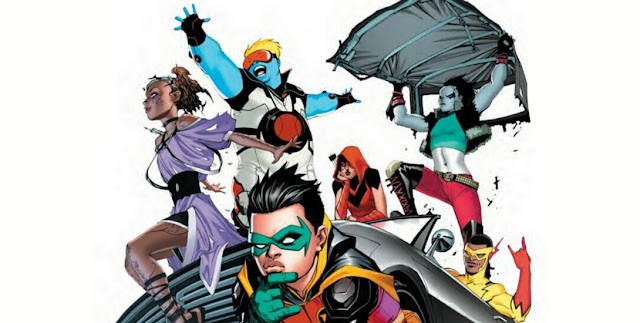 “SET IT OFF: PART ONE” Damian Wayne has had enough of being bossed around. After the universe shattering events of Dark Nights: Metal, and Justice League: No Justice Robin has assembled an all-new iteration of The Teen Titans. As DC Comics’ publicity says “New blood, new mission, new attitude.” These aren’t just words, folks… these are the FACTS.

New Titans writer Adam Glass follows up his thought-provoking work in the recent Teen Titans Special in style. In my review for that issue I stated that I was really concerned about the actions taken by Damian Wayne in his chapter of the story, but that I had faith in the writer.
It’s nice to be right.
Mr. Glass has delivered on the promise of the special, and then gone one better. Trust me when I say that Robin’s ultimate solution for his enemies is a doozy. The one problem that I foresee for Damian, though, is when his father and “His boy scout alien buddy” find out about it… and you just know that they will.
The art in this issue is absolutely top level. I’ve been a fan of Bernard Chang’s work for many years and reviewed his work every month on Batman Beyond. I've even been fortunate enough to conduct an interview with him too. His take on Nightwing was also terrific, so I’ve pretty much gotten to the stage where I will pick up any book with his name on it.
Look at this stuff!
Bernard Chang can handle tons of detail, blistering action, terrific facial expressions and quiet character moments perfectly. When paired with long-time collaborator Marcelo Maiolo the art actually reaches even higher levels of excellence. Check out the page 2&3 double spread below, and you’ll see what I mean (actually every page of this issue is a feast for the eyes). This art team is one of my favourites. Absolutely terrific stuff.

After the aforementioned reservations I had about Damian’s did he/didn’t actions in the in the Teen Titans Special, I was prepared to have some strong negative feelings to raise against Adam Glass this time around. Thankfully I was right to stay calm and have faith in him, as I honestly have nothing negative to say about this issue at all.
The new Titans team is intriguing, and the new creative team has delivered an impressive debut issue. Letterer Rob Leigh has also delivered some outstanding design work, great character based caption boxes and beautiful crisp script, in an issue that has more than its fair share of dialogue.
Nope, no complaints from this reader. Teen Titans #1 is a great comic.

With the amount of interest surrounding the Teen Titans these days; an animated movie in theatres, a hit cartoon show, and the upcoming live action series for the upcoming DC Universe Streaming Service, this series needed to deliver a first rate relaunch. I’m happy to say that it has exceeded expectations, and that I can’t wait to see what comes next.