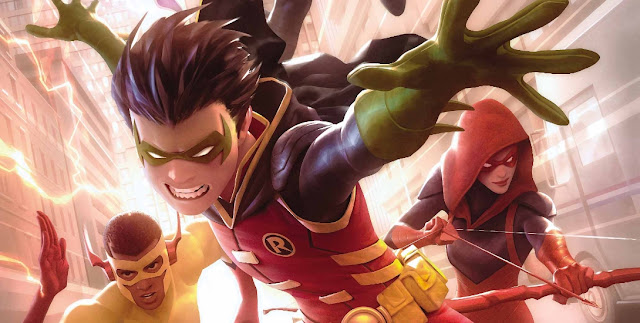 “SET IT OFF: PART TWO – FULL TILT BOOGIE” Alright, I was wrong. Happy now? I will be the first to admit that I thought the introduction of three all new characters – half the team, in fact – was a mistake. Then I heard that one of the newbies was going to be Lobo’s daughter, which actually upset me a little, I mean… cheap marketing stunt, or what?
Two issues into the new run and writer Adam Glass has me eating my words. These new characters work. Why? Because they actually have their own voices, personalities and traits. Any comic book based on teenage characters that contains dialogue like this is deserving of my admiration:

Roundhouse: (Upon being released from a crate where he and the other five Teen Titans had been hiding) Thanks Gizmo! It was getting real ripe in there.
Crush: Says the guy who never takes his armor off.
Roundhouse: It’s hard getting in and out of this thing!
Crush: Try wearing a bra every day.
Robin: Both of you shut up and hit something

Now THOSE are real teenage voices and sentiments. Priceless.

These are the kind of comics that I would be happy to give any kid, from age 8 to 80. Adam Glass writes from the heart and from the funny bone. These two issues have delivered humor, heart, action and suspense in spades. This is great comic-book entertainment done the old-fashioned way.
For two years I’ve been singing the praises of the art and color tag-team Bernard Chang and Marcelo Maiolo. Beautiful layouts, sharp action, and brilliant facial expressions coupled with color, light and effects worthy of ILM, all on the pages of a comic. This title is fun, and reads like a Hollywood blockbuster, but with an unlimited special effects budget. Just look at it!
While you’re there think about all the words littered across just these six pages. Then think about the 16 pages that you haven’t seen yet, and admire the title page and all the chaos surrounding it. Then you can ask me why I love to praise and give credit to comic-book letterers. Kudos and respect to Rob Leigh. Good job!

Nope… there really aren’t any. Honestly, this is one seriously entertaining issue. If I have to be nit-picky then I’ll say that the cliffhanger ending has really laid waste to my nerve endings, but I have faith in Glass, Chang, Maiolo and Leigh. There’s a solution… I hope. I’m starting to really love all of these new characters, so I’m really hoping we don’t lose any of them.

With all their issues, their capacity for chaos and huge power levels, this team could really be a recipe for disaster. Are they in control? Are they even competent? The bickering, arguing and high comedy in this title are brilliantly counter-balanced with drama, tension and action. I may not have been all-in at the outset, but I’m man enough to admit when I’m wrong.