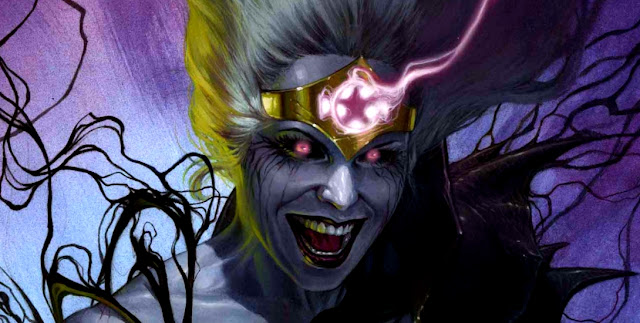 “The Witching Hour” – Part One 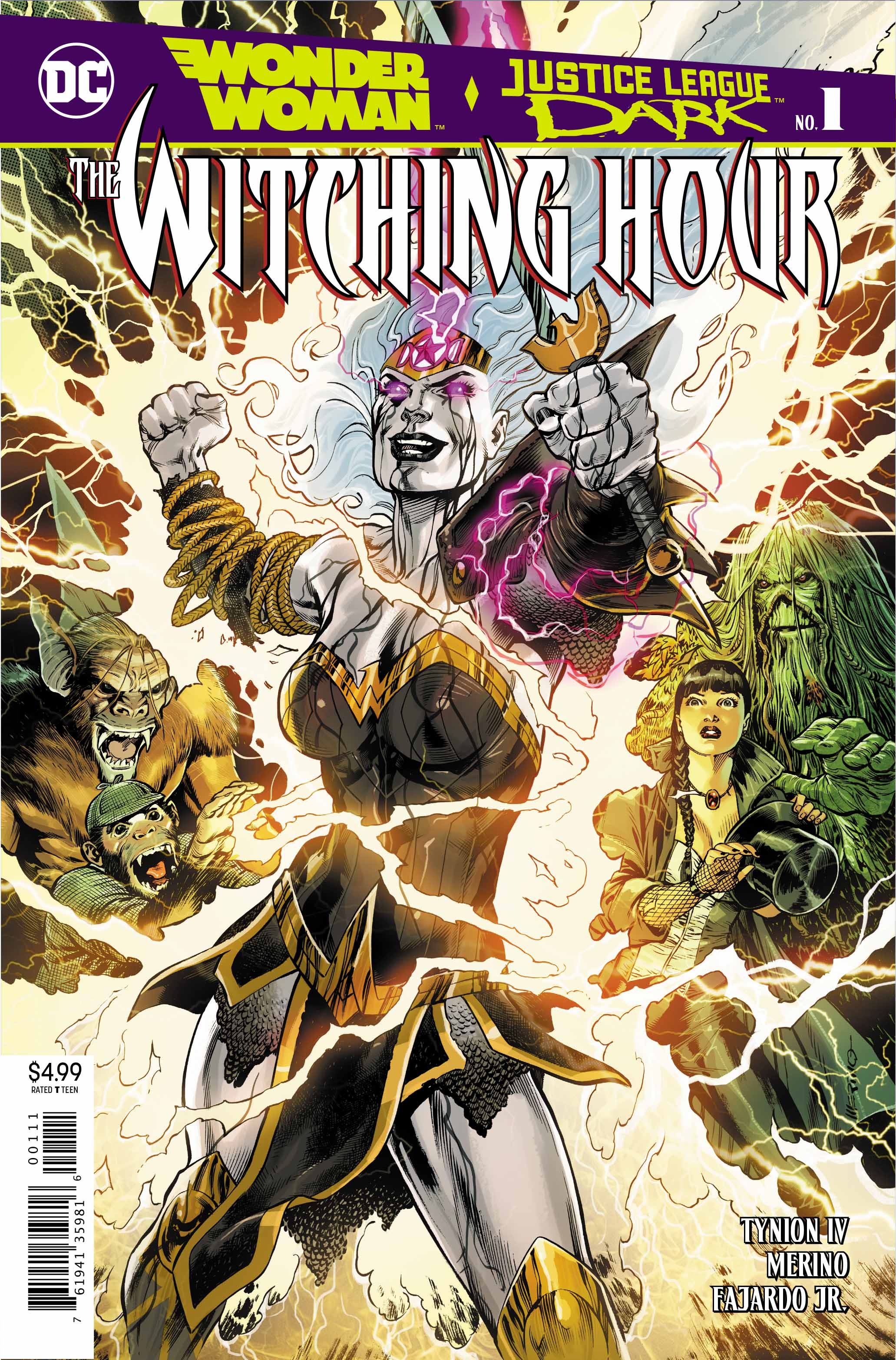 Reviewers recommendation: If you haven’t already, please read Justice League Dark issues #1 – #3 before this issue and before this review, as spoilers for those stories are imminent.
Ya dig? GREAT!
As a child Wonder Woman witnessed an assembly of Themysciran witches performing an occult rite. Then Hecate, the triple goddess of magic, branded Diana’s forehead with a symbol of immense magical power. After the collapse of the source wall the creators and original masters of magic finally witnessed how humanity have been abusing their power.
Nabu, the agent of the Lords Of Order, also known as Doctor Fate, betrayed the human race. This allowed one of these magical beings, known as the Otherkind, into our world. The Upside Down Man then, almost single-handedly, destroyed the entire Justice League Dark roster, before the power of Wonder Woman’s brand manifested itself, holding the monster at bay… albeit temporarily
Whew!
We come into this incredible one-shot special with Wonder Woman re-living the forgotten part of her childhood. Diana and the rest of the JLD then attempt to alert the core Justice League members about the threat to magic, and the entire world. 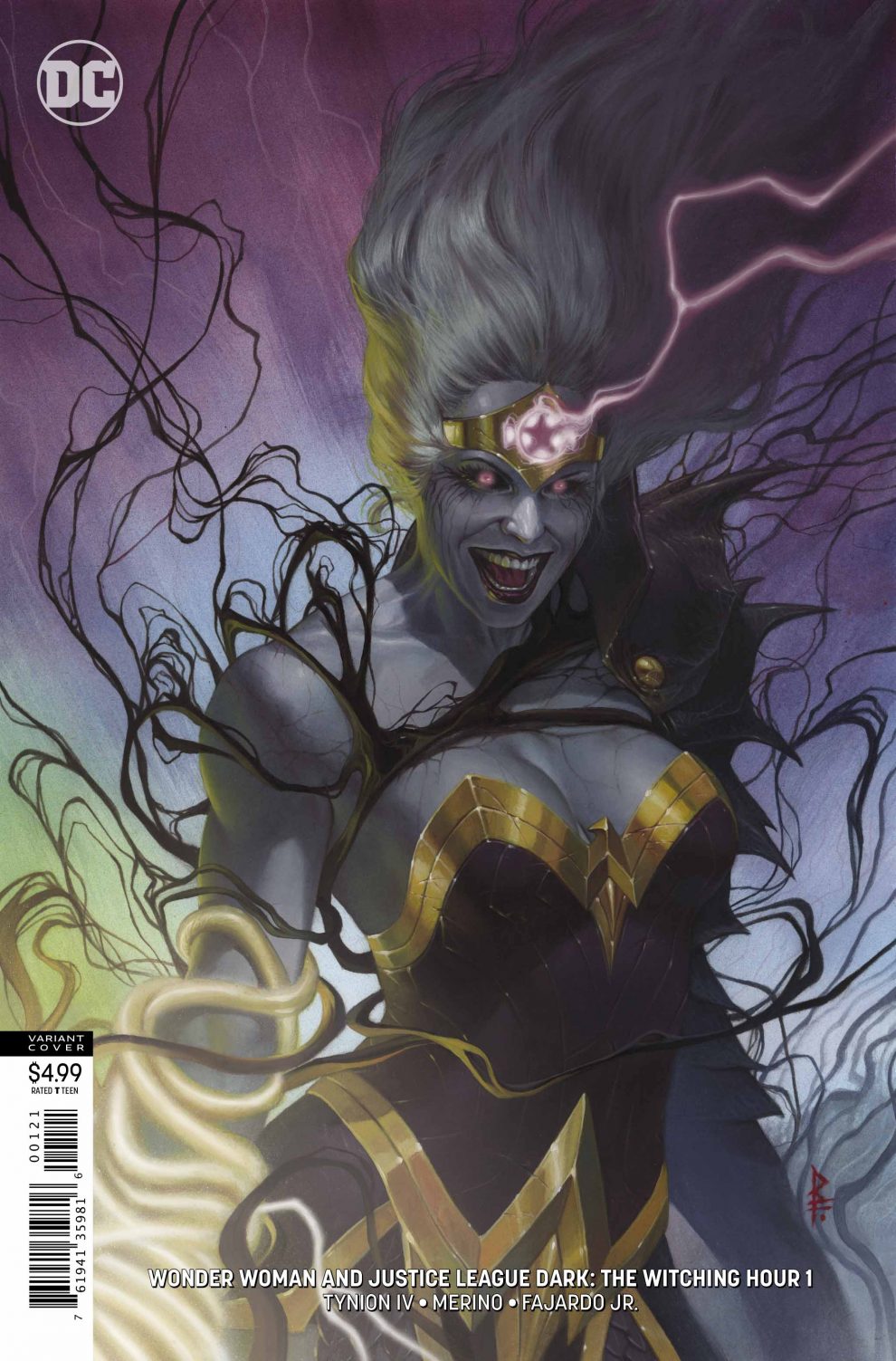 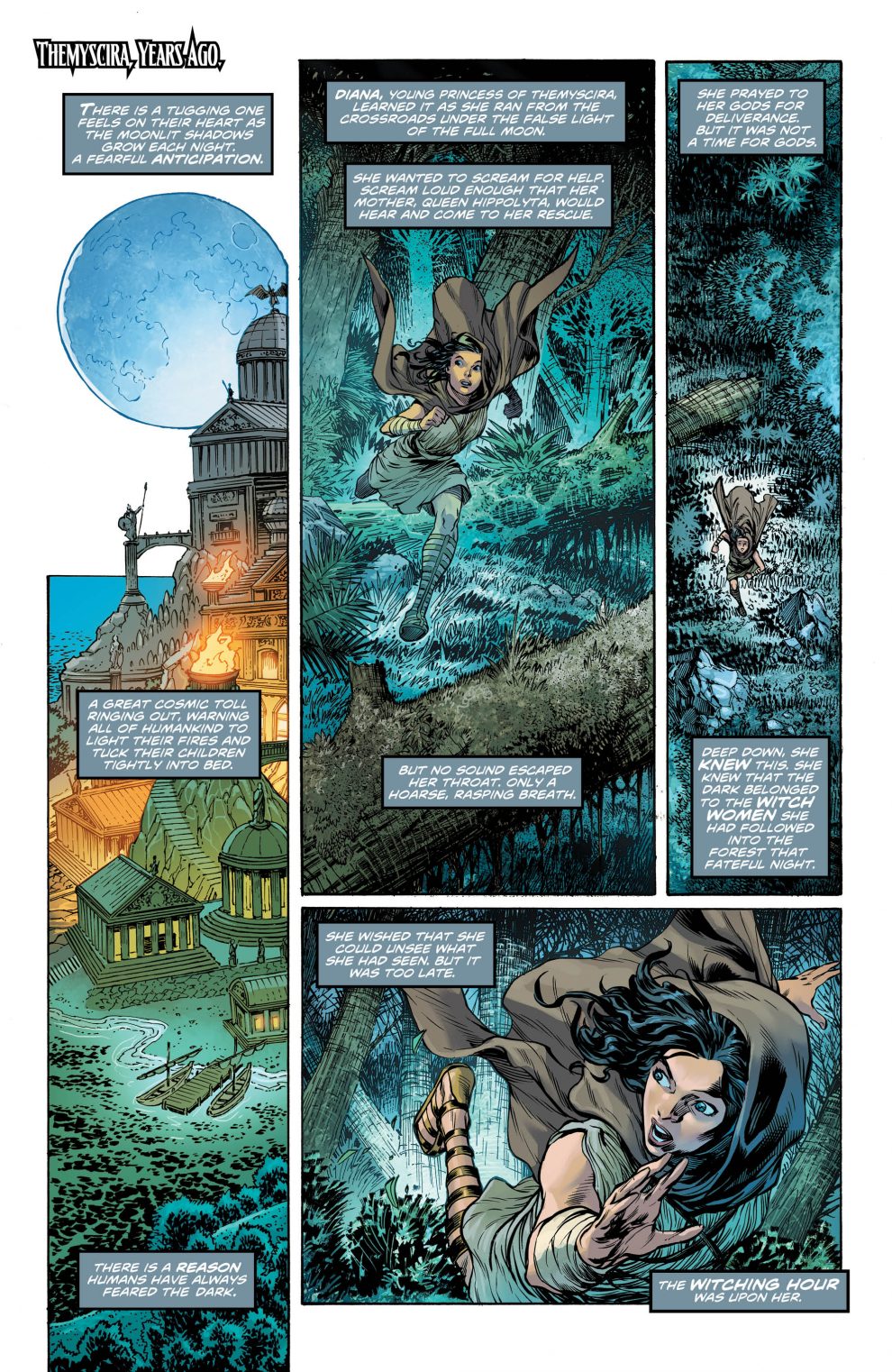 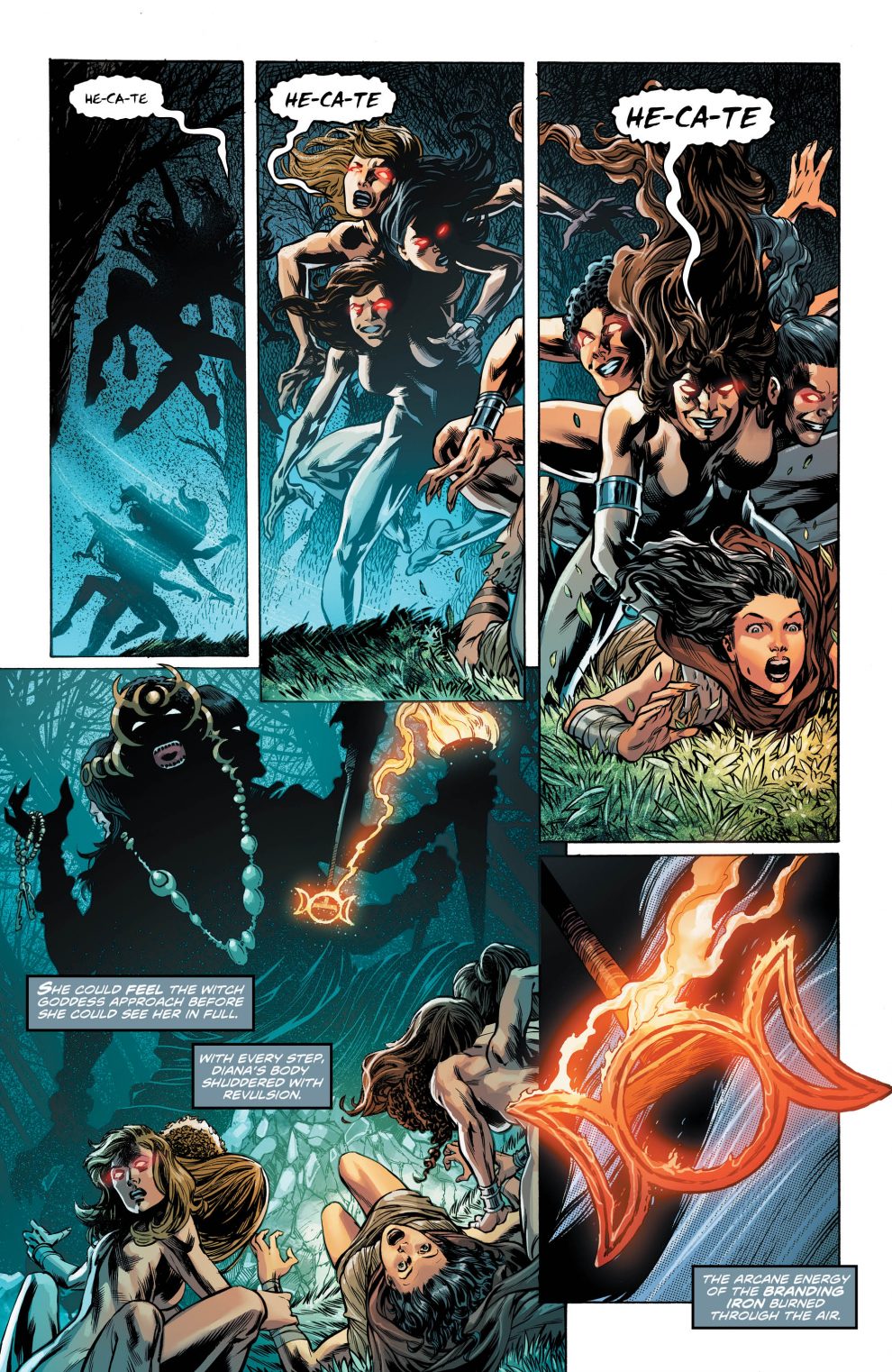 This issue is astonishingly good. To see the entire League fearful, Diana afraid, and even Batman concerned, adds a sense of foreboding to the proceedings. Magic is a force that can lay even the mighty Superman low. Dr. Fate has been taken out of the picture and Zatanna can no longer trust, or even use, her own magical powers. James Tynion IV has laid the foundations to a magical war unlike anything seen in decades.
A wise man once said

I used to think I knew from fear…I didn’t. All I knew were the suburbs of fear…and now here I am, in the big city.

Alan Moore – Swamp Thing Volume 2 – Issue 26: “A Time Of Running”
This totally encapsulates what I feel after reading the great work that Tynion has given us in Justice League Dark #1 – #3 and in this special. 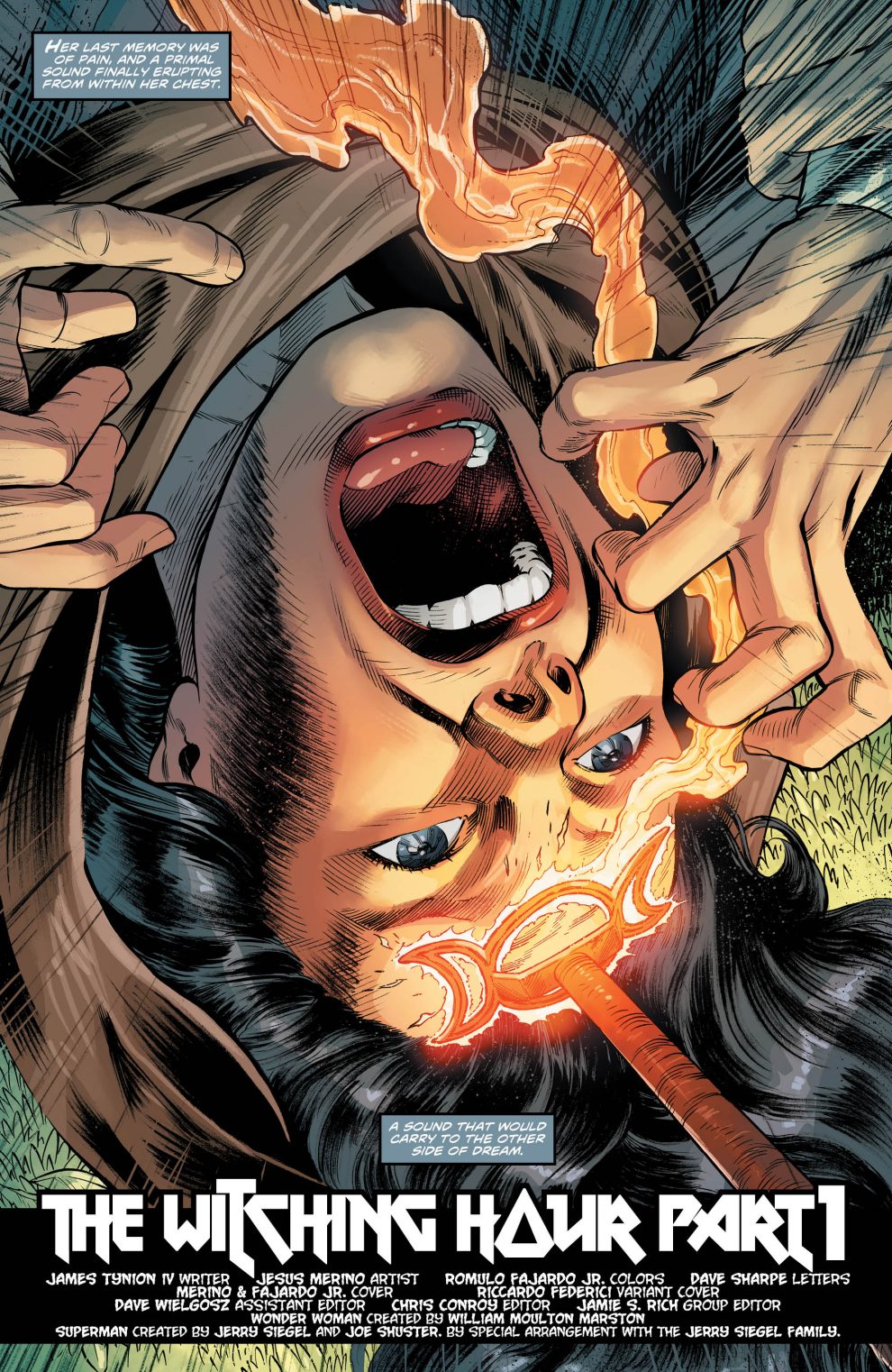 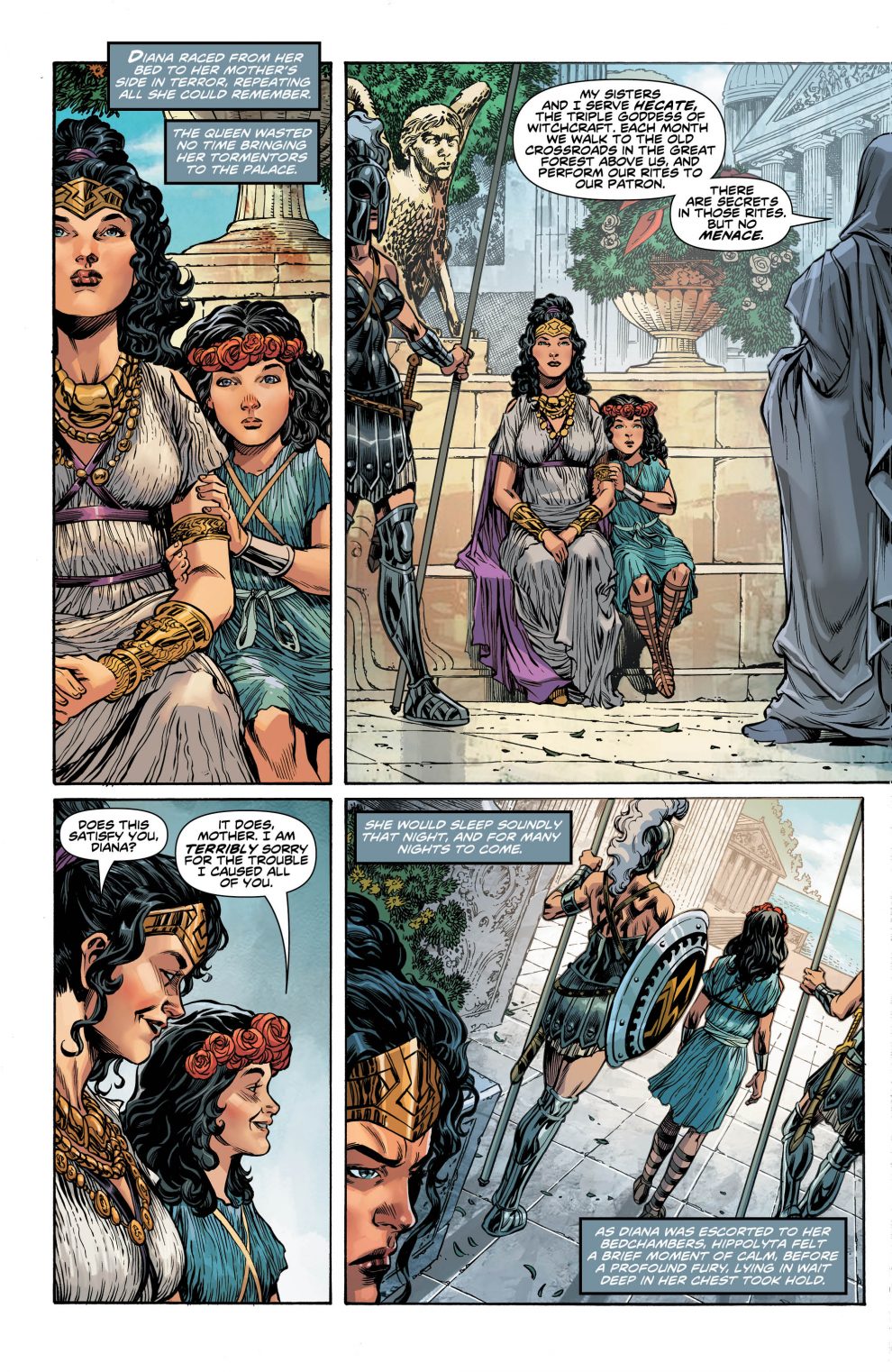 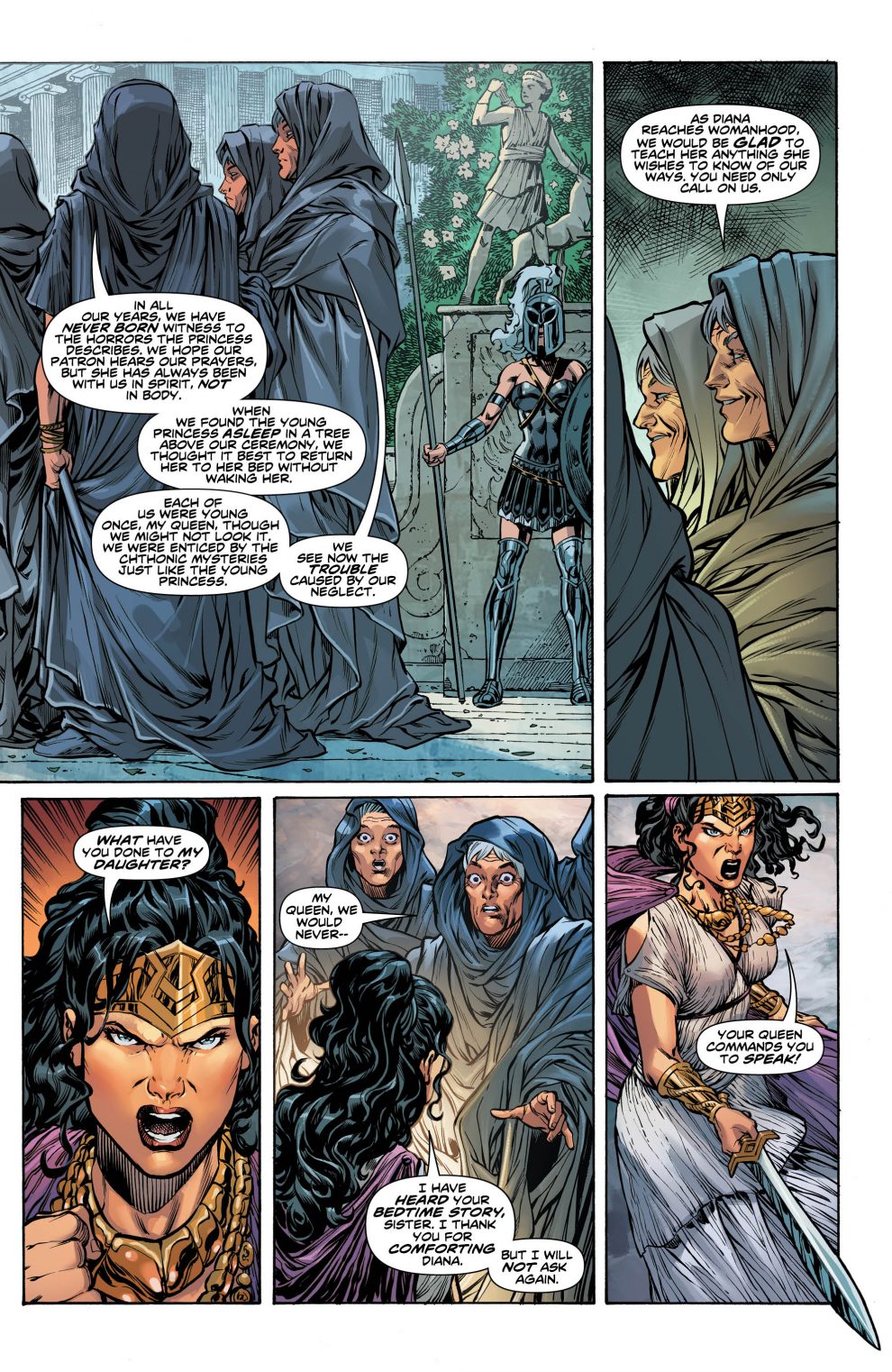 Masters Of The Mystic Art

The art in this issue is pretty darned spectacular. With JLD we’ve been treated to the terrific work of Álvaro Martínez Bueno, Raül Fernandez and color artist Brad Anderson. In this first chapter of “The Witching Hour” art and color are handled by Jesus Merino and Romulo Fajardo Jr. Usually when a new art team comes into an established series or story arc I worry a little, but when I heard who would be in charge of the visuals in this issue a grin appeared on my face that a Clown Price Of Crime would be proud of.
This story takes us from Themyscira, to the Hall Of Justice, and from countryside to sprawling metropolis. We see conversations around a table, friends having fun in bar, action, carnage and almost everything in between. All of it is drawn with flair when called for, but also with delicacy and pathos when required. All of it is first rate comic-book eye candy.
Letterer Dave Sharpe finishes it all off brilliantly. Even the tiniest font, designed to be almost unreadable, is legible when blown up digitally. This comic is one that will stick in my memory for a while, whether Hecate wants it that way or not.

This first chapter of “The Witching Hour” has me totally hooked. Usually I’d have to wait a whole month to see what happens next, but the story continues in Wonder Woman #56, which hits shelves in just seven days. I’m so there… will you be?