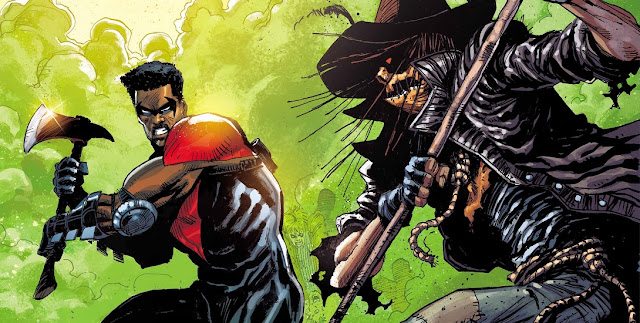 “KNIGHT TERRORS”: PART SIX. Jonathan Crane has been psycho-analyzing Ric Grayson, completely oblivious to the fact that the young man is the focus of his own decades long obsession. As Robin, then later as Nightwing, the former Dick Grayson’s lack of fear was the one thing that terrified Crane himself. In his guise as Scarecrow the psychologist turned psychopath decided to alter his fear-gas, so instead of creating terror it would now remove it. This causes the citizens of Bludhaven to act out their darkest desires without fear of the consequences. 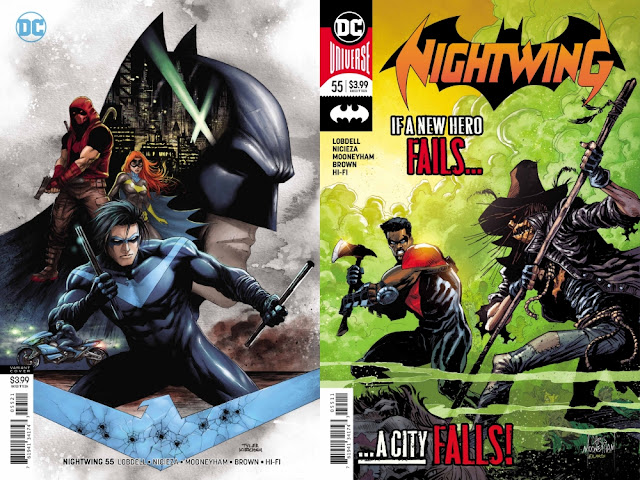 Writers Scott Lobdell and Fabian Nicieza have not only managed to turn Nightwing’s life upside down, but by having our hero become not just Scarecrow’s enemy but also his inspiration, they’ve set the villain’s world topsy-turvy too!
I’m loving the way that the story progresses issue by issue. This title is not resting on its laurels, providing shocks for shocks’ sake or plodding along. Scarecrow’s plot has been slowly building, the team of Nightwings has grown more daring and Ric Grayson himself is progressing, in both the development of his new persona, as well as in the growing acceptance of the abilities and training his former life left ingrained within him.
The art in the issue has settled down too, which is very welcome. The credits page has been misleading for months, and again I feel that both artists credited for this issue drew their own segments, rather than together as the final page would have us believe. I’m not as bothered as with past issues though, as Chris Mooneyham and Garry Brown’s art styles are not as dissimilar as those of Mooneyham and Travis Moore. This issue feels a lot more cohesive then previous instalments. 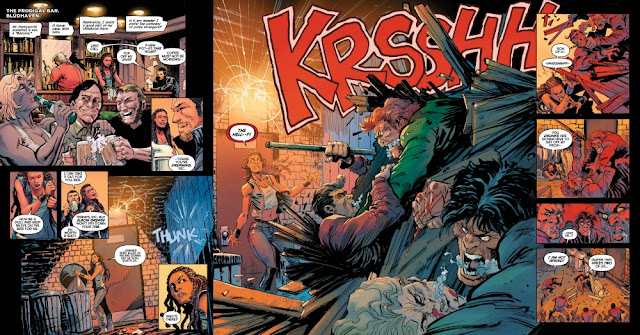 Hi-Fi and Andworld both polish off the book’s edges with their unifying color art and lettering, making the issue flow and feel like one solid story. The color art in this issue is actually pretty spectacular when tied in with Andworld’s terrific sound effects. Page 1, and the great two page spread over 2 and 3 are prime examples.
The first couple of panels on page one, set inside the bar, are crisp and sharp with softer colors. Suddenly, as soon as Bea heads into the alleyway, things become blurry, and more nightmarish with harsher hues. The use of color flares seen coming from within the bar are extremely effective. The same effects are used even more powerfully in the double splash when Andworld’s huge “KRSSHH” breaks the scene. What was once a cozy, real-world setting showing friends sharing a drink collapses into scenes of sheer terror and chaos.

I don’t really have a whole lot to complain about, as I found this issue to be a great read. It had a strong cohesive plot, great character moments, action, tension and some lovely art. 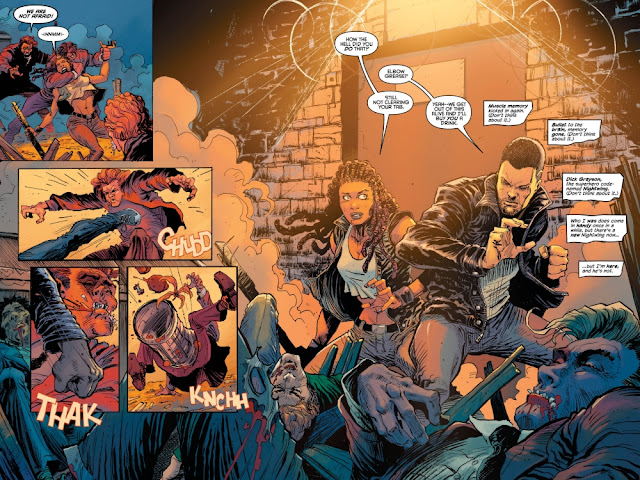 All the pieces are now in play. The Nightwings are out there, Scarecrow has joined the fray and Ric Grayson has been forced into the battlefield. It seems clear that circumstances have taken Dick Grayson out of Nightwing, but they haven’t removed Nightwing’s spark from within Ric. Throw in the master of fear and a team of rookie vigilantes and the situation is ready to explode. The question remains as to which Nightwing, if any, will be around to pick up the pieces once the dust settles.