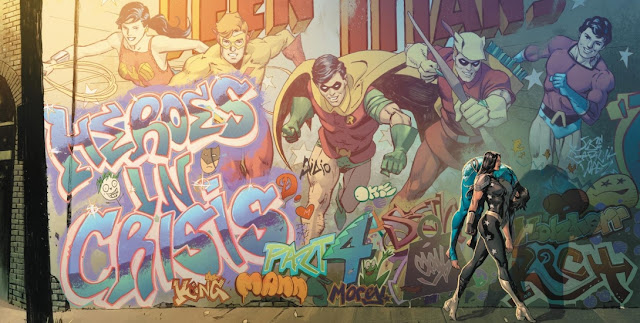 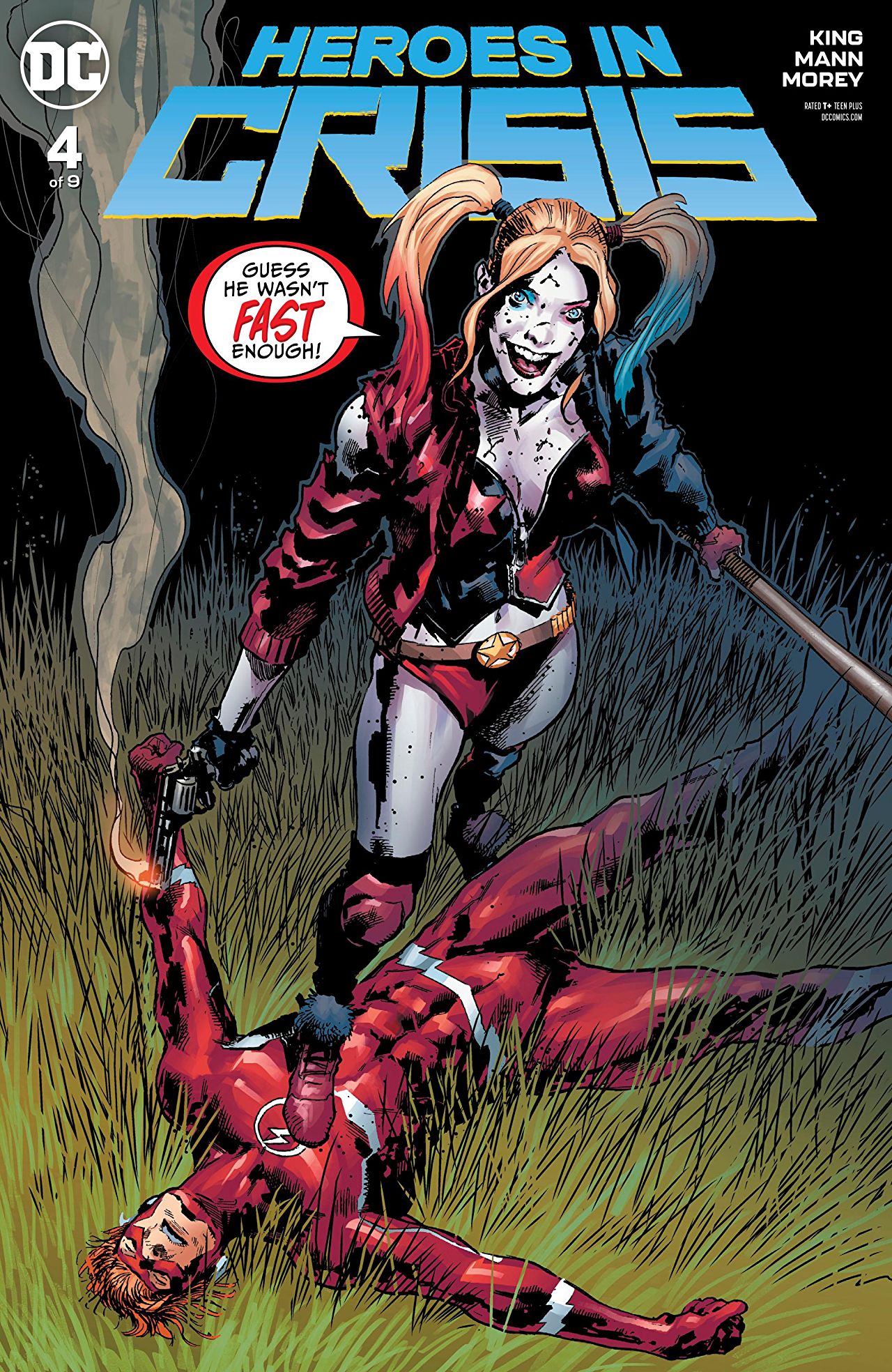 “He said, she said.” For the last four months Booster Gold and Harley Quinn have been at each other’s throats, each of them accusing the other for the deaths of Wally West, Roy Harper and many others. As readers we have seen evidence that both exonerates and damns them both.
Tom King is giving us an epic mystery that is tearing the internet, and comics fandom, right down the middle. Many are calling this series gratuitous, unnecessary and even misguided. I’m not one of those readers. I think that the writing in this title is some of the best thought out, well researched and emotionally charged that I’ve ever encountered.
Donna Troy talking about the mythological city that she shares her surname with is pure genius. Her character and her history is one of the most mixed up, convoluted, rehashed and reworked in all of DC Comics. Wonder Girl, Troia, Darkstar… fires, marriages, continuity re-sets and Infinite Crises… she’s been through them all.

Maybe it’s just a mistake.
A confusion between two old storytellers who got mixed up. 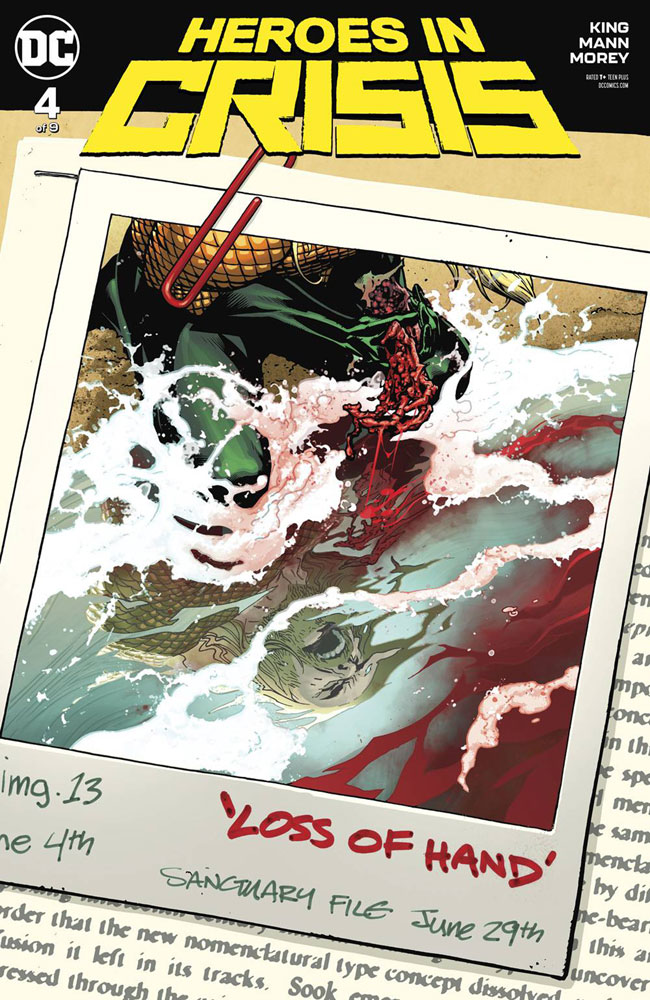 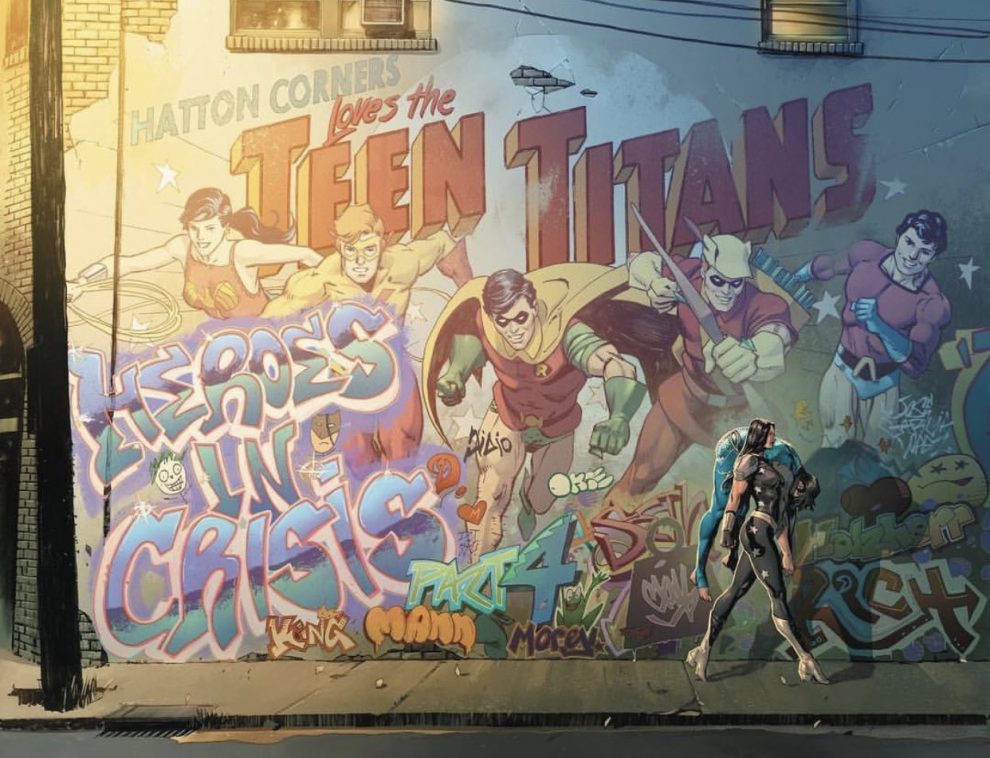 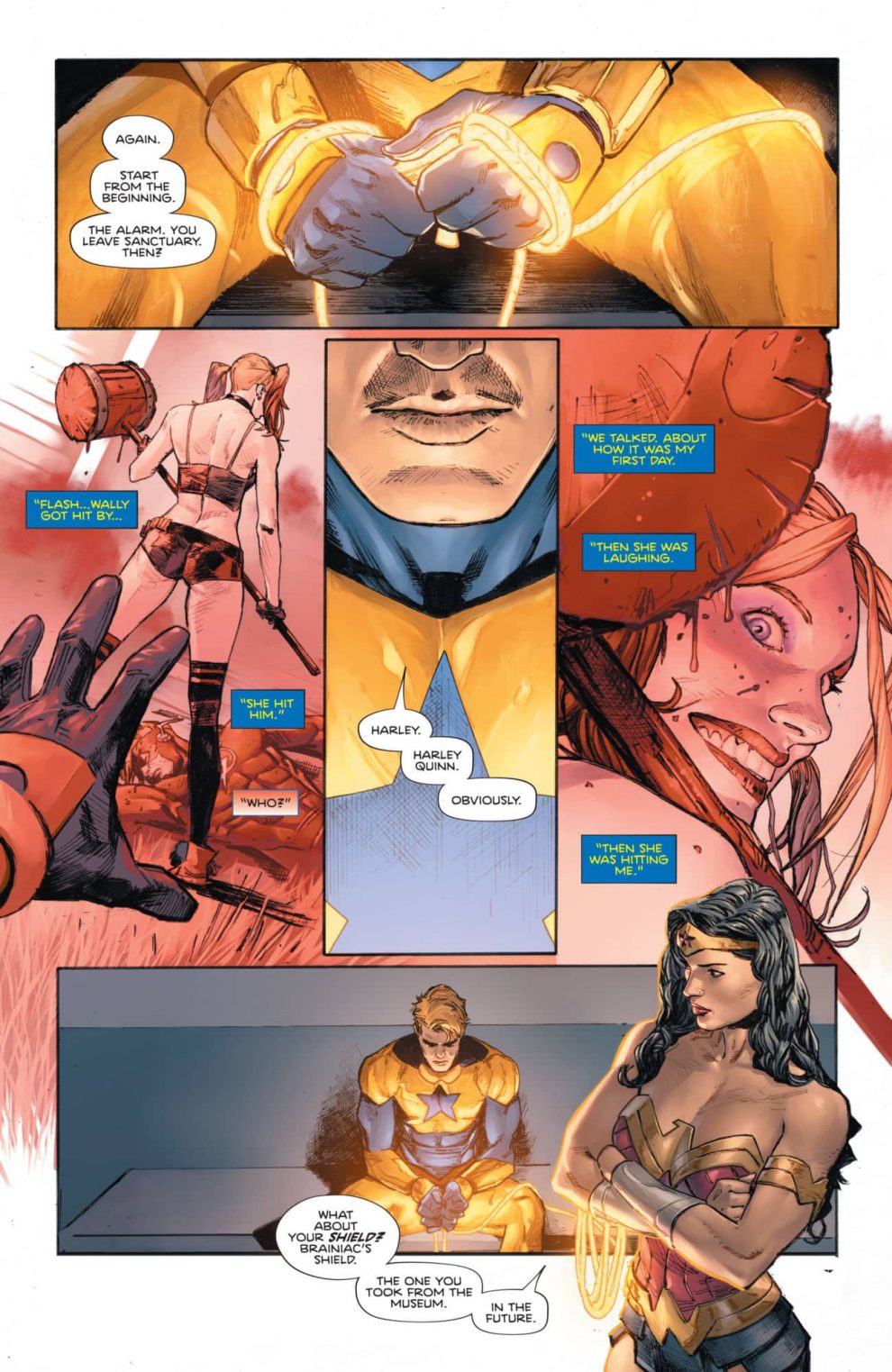 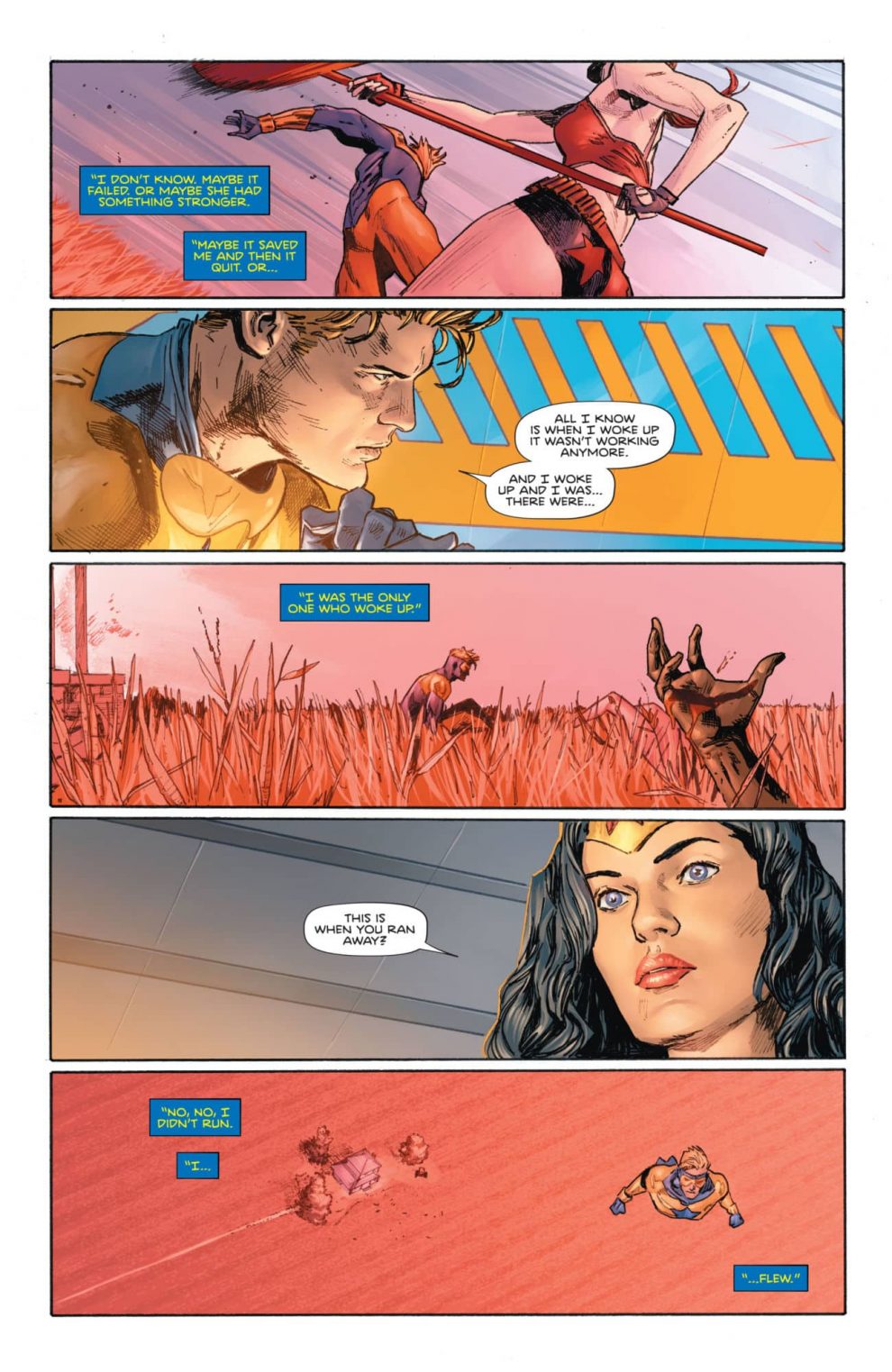 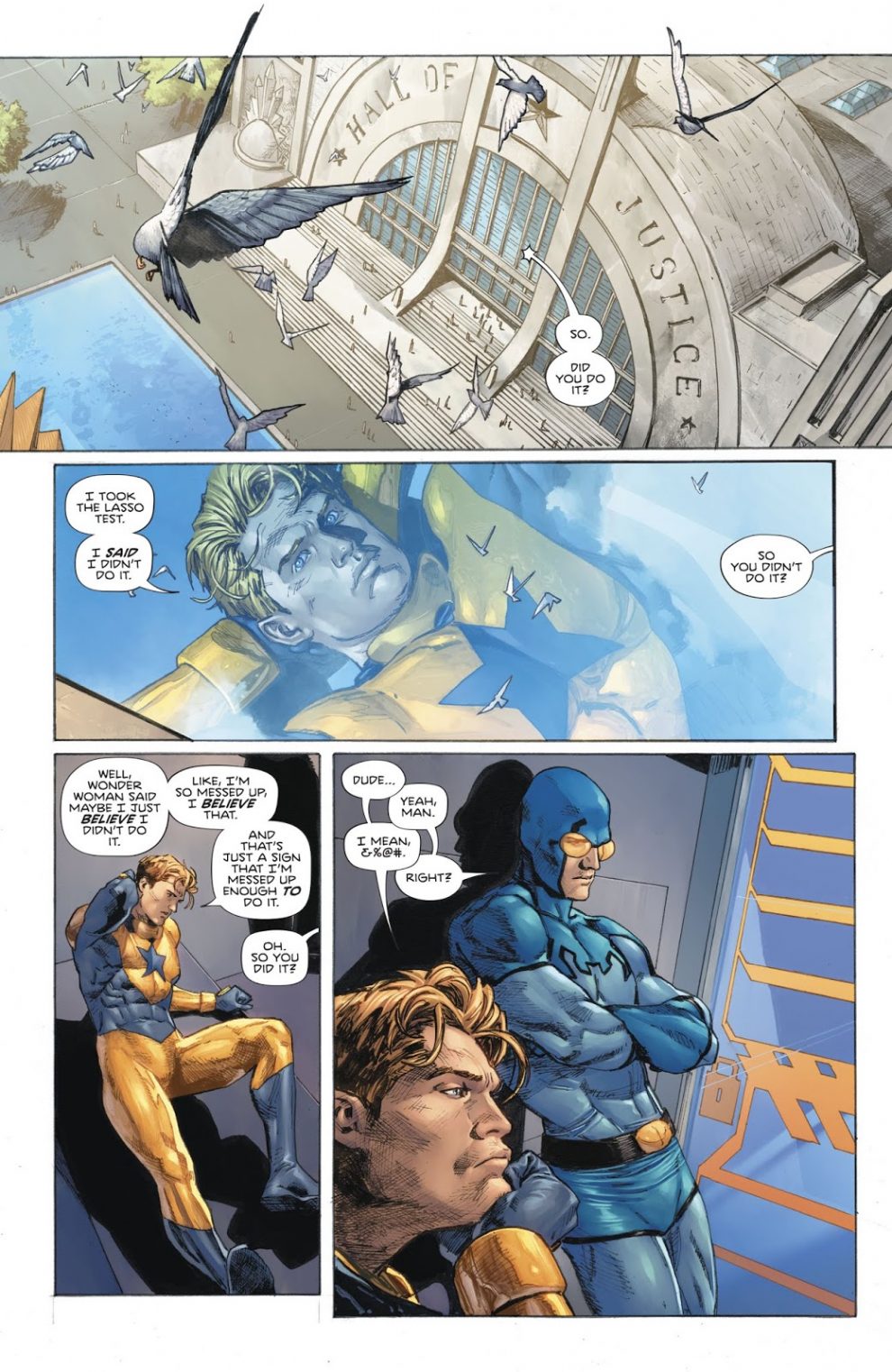 Booster Did It. No… Harley Did It.

Both Booster and Harley receive much needed help in this issue. While Gold’s ally is no surprise, Harley’s benefactor is a real bolt from the blue. I honestly love the way that Tom King depicts these much loved DC Comics characters. As a veteran fan for well over 40 years I don’t understand how some readers feel that this writer doesn’t understand these heroes. Still, the world would be very boring if everyone liked all the same things.
Clay Mann and Tomeu Morey are two of the finest artists in the business. There were several moments over the course of this issue where I just had to stop and drink it all in. The double splash over pages two and three of the issue, with Donna Troy carrying the inebriated Tempest over her shoulder past a Jose Luis Garcia Lopez Teen Titans mural… wow. Ollie and Dinah on the cliff. Majestic. Seeing the knuckles Morey paints in color over Mann’s line art when Batgirl and Harley Clash, and the wrinkles on Batman’s gauntlets as he’s questioning Superman. Masters at work.
I don’t know if Clayton Cowles is responsible for the graffiti on the aforementioned mural, but it rocks! Whether he is or not, the lettering throughout the issue is fantastic.

From Superman’s Ozymandias-like revelation about Lois Lane’s scoop, to the touching introduction of the “Dynamicker Duo” this issue had me spellbound from the first page. I’m not shocked by Lois Lane in a T-shirt and underwear any more than I am by Superman in his boxers on the very next page. Batgirl showing Sanctuary where she was shot through the spine is not titillating, it’s disturbing. I honestly thank that some fans aren’t happy unless they’re complaining. “If you have nothing nice to say…”
I hate that Roy and Wally are dead, but I’m still loving Heroes In Crisis.