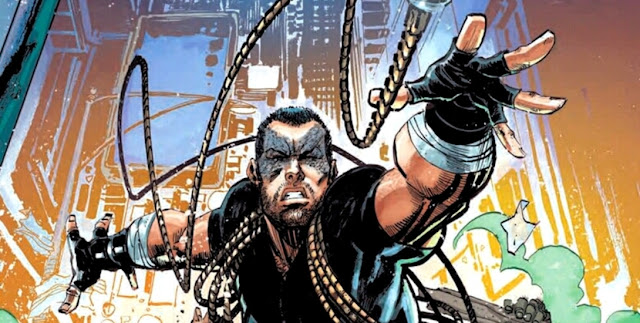 “KNIGHT TERRORS”: PART SEVEN. Fans of the original Nightwing – a certain Mr. Grayson – are sure to get very excited when they see the cover for this issue, and they should. With Scarecrow bearing down upon Bludhaven, Detective Sapienza’s team of vigilantes suffers a devastating blow, and Ric Grayson is forced to enter the fray.
Scarecrow has removed fear from the psychological makeup of Bludhaven’s citizens, causing them to riot and destroy the city. Alphonse Sapienza’s team of Nightwings has risen to the occasion, but are they up to the task? What could make Ric re-enter the battlefield, especially after he’d decided to leave his vigilante past behind him? 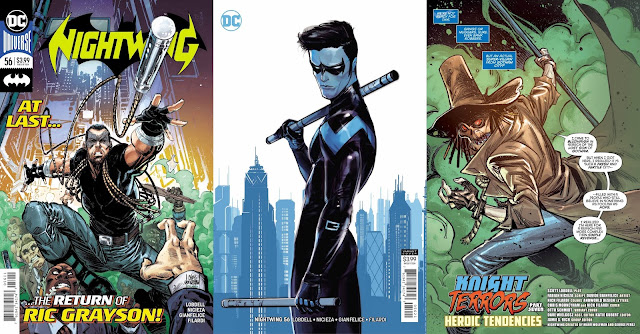 Yes! The Martial Artist formerly known as Dick is back… and he’s lost NOTHING. I know that this new direction has upset a few fans, but anyone not reading this series is missing out. Whatever name he may be going by these days, Ric Grayson is awesome! I will always give a new creative team a chance when they take over a series, and where I may not have been Scott Lobdell’s biggest fan in the past, his plot married with Fabian Nicieza’s script is red hot.
Ric Grayson is a team-leader par excellence. I would actually rate him as DC Comics’ very best. His track record with the Teen Titans, the short-lived team of Outsiders he led, as well as with the Titans has proven this time and again. The way he doesn’t just join in, but actually takes charge in this issue proves that the old Dick Grayson may be forgotten, but he’s far from gone.
It’s terrific to see Nick Filardi back on Nightwing, check out his work on the attached preview pages and you’ll see why. His muted colors in this issue add to the sense of this entire scenario being a fever dream. The green mist of Scarecrow’s new fear gas, the street lights blurring the Nightwings in the distance. Lovely work.
Andworld’s letters are crisp, perfectly laid out and eminently readable. Check out the double page spread below to see just how hard he/she/they have worked on this issue. Great job! 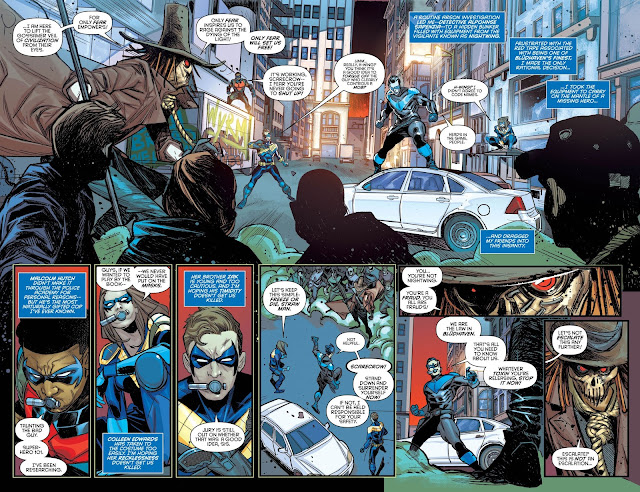 My usual gripe… yet another artist has joined mid-story. This is however, just a minor niggle at this point. Newcomer (to this title at least) David Gianfelice does a fantastic job with the art in this issue. His style is similar enough to that of both Garry Brown and series semi-regular Chris Mooneyham that this chapter is very in-keeping with everything that’s come before. In fact, the art is of a high enough calibre that I would be happy to see more of his work. 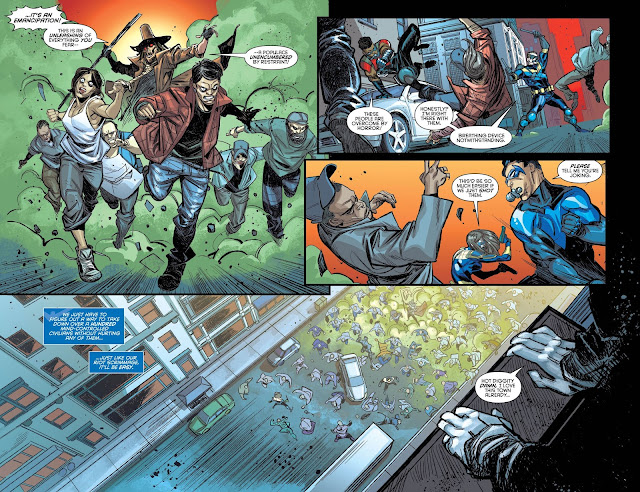 I thoroughly enjoyed this issue. It was action packed, well scripted and brilliantly drawn. If we could just get a permanent art team settled in, then this series would be close to perfection. I’m fully invested in this title, with Ric back in the thick of things and a mysterious visitor watching proceedings from the rooftops, I’m sure that the fun’s just getting started.