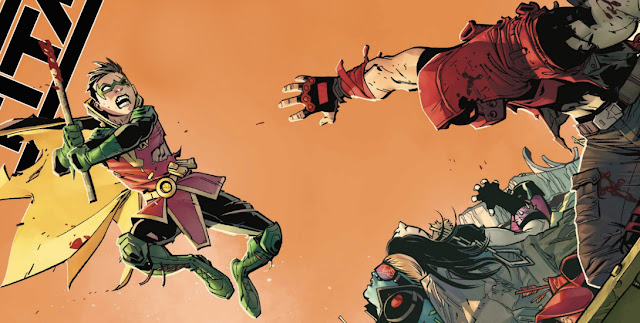 “Robin Vs. Robin” and “Joy To The World” Hot on the trail of the super criminal known only as “The Other” Damian Wayne has come to the conclusion that Red Hood, his new mentor, has been playing him and could actually be the villain he’s been looking for. This issue sees brother fight brother while fractures form between the other members of the Teen Titans.

As I’ve come to expect, the writing from Adam Glass in this issue is great. He manages to nail Jason Todd’s personality, clearly show the differences between Red Hood and Robin, and perfectly encapsulate the relationship between the two “Brothers.” The action and fight sequences between the two are brilliantly written, and littered with some extremely colorful and clever dialogue.
The second story, featuring Red Arrow, D’Jinn, Crush, Kid-Flash and Roundhouse is also terrific. Emiko has a lot on her plate, trying to corral the team and get them to full combat efficiency. The sudden appearance of a super-villain, with a ridiculous name but incredible powers, leads to further turmoil within the group, and brings further revelations concerning the blossoming relationships between the Titans.
The art on “Joy To The World” is very good. Jose Luis and Jordi Tarragona have a light, almost cartoony style which is loose enough to be fun, whilst realistic enough to tell the story without it feeling like an episode of Super-Friends. Their work is also very in-keeping with what regular series artist, Bernard Chang, has given us for the last half dozen or so chapters.
The color art by Hi-Fi and lettering by Rob Leigh is as excellent as we would expect. These are two names that always deliver the goods.

Sadly I am not at all enamoured by the art in the first story “Robin Vs. Robin.” I don’t know if penciller Ryan Benjamin or inker Richard Friend is the cause of this. From the very first page the art is patchy and inconsistent. Jason Todd’s face looks like it was drawn by one artist, who couldn’t be bothered to finish, while Damian’s face is shiny, fully rendered and child-like.
Jason Todd looks all Frank Miller grit, while Damian is completely Amanda Conner-esque. Unfortunately, it doesn’t stop there. On page two Damian looks about 8 years old, all cheeks and chubby youth, whereas on page three he looks about 15 in the first panel (slimmer and older) then goes back to being a chubbier kid, somewhere in between where he was on the last page and where he was at the top of this one. Page five also sees Damian swap faces… and it’s annoying.

Thankfully I can focus on the action and on the brilliant dialogue, ignoring the niggles in the issue. Adam Glass is adding more and more heat to the pot and, with D’Jinn, he has created a character I care about, but who really frightens me. Being a Teen Titans / Titans fan for over three decades (I own the issues where Dick Grayson gave up on being Robin and became Nightwing) no other Titans member has had me more on edge since Raven’s turn to the demonic, or Terra from the legendary “Judas Contract” storyline. I don’t think that there’s higher praise than that.
Bring on Teen Titans #27!