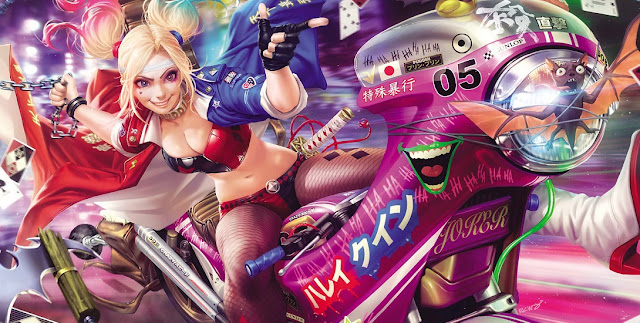 Writer: Sam Humphries
Artist: John Timms
Color Artist: Alex Sinclair
Letterer: Dave Sharpe
Review by Philip Clark
Summary
‘Hunted By The Bat’ Part Two continues on from issue #57, where Harley is taken in for questioning by none other than the big, bad, Bat. Evidence points to Harley as the prime suspect for a murder, although she claims she’s innocent! When the body of the victim mysteriously goes missing, Bats and Harley race to solve the crime in the space of a night.

Positives
I really love Batman and Harley’s relationship in this issue. Quinn is desperately trying to prove her innocence, while also trying to demonstrate that she’s a changed woman to Batman. The Dark Knight doesn’t believe her immediately, and treats her like a criminal. Harley, being Harley, doesn’t get disheartened by that, and actually redoubles her efforts.
It was really interesting seeing two of DC’s strongest-willed characters butt heads, while ultimately trying to achieve the same goal. They're both so well written by Humphries, if not a little exaggerated in some areas of their personalities. On the whole, though, the dynamic between the duo is extremely well written and drawn.
There are a few pages in particular that capture their relationship perfectly, especially when we see them beating down some street thugs. John Timms does a brilliant job at drawing these iconic characters, while also making them stand out from other interpretations.

Negatives
Honestly, Harley Quinn is becoming a comic book series that is close to perfect. The only thing I’d say is letting the series down currently is the inconsistent artwork. In some issues it’s fantastic, and in others it seems a little lack-lustre. If the creative team can really pull it together with some consistent art, this could actually be my favourite title out at the moment. Of course, that’s more of a negative about the series as a whole, than this actual issue.

Verdict
This issue had it all. A brilliantly woven story that is only going to get better and great artwork throughout. Truly a masterpiece.