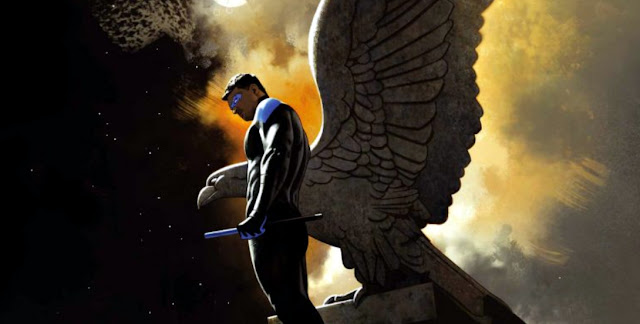 “Heroes Without A Home.” In the last issue Ric Grayson finally felt compelled to help the new team of Nightwings; a group of law enforcers who had adopted his old costumes. Together they took down the Scarecrow, who had adapted his fear gas to remove all fear from the citizens of Bludhaven. This issue deals with the repercussions of this decision, and introduces an all-new scriptwriter to the series.

With the threat of Scarecrow behind him, one could be forgiven for thinking that Ric Grayson’s troubles were over. This comic balances the difficult line of dealing with the aftermath of the last arc, while simultaneously setting a new story in motion. We get some insightful character moments, development of the budding romance between Ric and Beatrice Bennett, and changes within the new team of cops turned vigilante crime-fighters.
I will admit to feeling some trepidation over the loss of scriptwriter Fabian Nicieza at the end of last issue. While I’m enjoying Scott Lobdell’s plot and the ongoing story, I haven’t always enjoyed his scripts and dialogue. Lobdell is plotting a great story and new scriptwriter Zack Kaplan has impressed me with his Nightwing debut. His dialogue is real, and in character. His knowledge and love for Nightwing, and welcome guest star Barbara Gordon, is clearly evident. Check out the conversation between Bea and Babs, as it’s funny and heartwarming. Yeah, I think I’m going to enjoy Mr. Kaplan’s writing.
Joy beyond measure! Travis Moore is back, and he’s brought long time collaborator Tamra Bonvillain with him. The art in this issue is gorgeous. Travis is one of those artists who is just as comfortable drawing romantic walks in the snow as he is giving us machine gun toting psychopaths. This issue has both, and they look fantastic. Travis’ pencils and inks on this book are as terrific as always, and I automatically smile whenever I see his name on the cover of any title I pick up.

Tamra’s color over Travis’ stunning line-work is a clinic in comics art symbiosis. The texture and depth added by the color art in this issue is astonishing. From Ric’s rosy cheeks on page one (the cold, or genuine affection for Bea? You decide), the battering ram breakdown, burning taxis, or the aforementioned machine gun moment; the color adds to the already exceptional visuals, without overpowering them.
Zack Kaplan has written a fairly wordy script this month, which is also laden with some really great sound effects. Andworld Design continue to impress me with the consistency and quality of their lettering. KRRSHKK! indeed. I felt that door splinter and the boot to the face that followed. Lovely work.

I was expecting for there to be a drop in quality this month but am happy to be proven wrong. I often comment on the lack of a regular art team for this book, so hopefully now that Nightwing is back on a monthly release schedule, I’ll get my wish. I know that the semi-regular artist Chris Mooneyham will be handling the visuals on issue #58, so am happy about that. I must admit, though, I was hoping that Travis Moore would stick around a while longer.

Where some could find the slower pace of this issue a little off-putting, I enjoyed it, especially after the roller-coaster thrill ride of issues 50-56. Ric’s relationship with Sapienza has grown and so has his connection with Bea. Having Duela Dent, back and adopting her “Joker’s Daughter” persona again is intriguing, to say the least. This character has crossed over from being hero, villain, anti-hero and everything in-between, so seeing her in these pages will definitely add some spice. I look forward to finding out just how much, over the next few months.