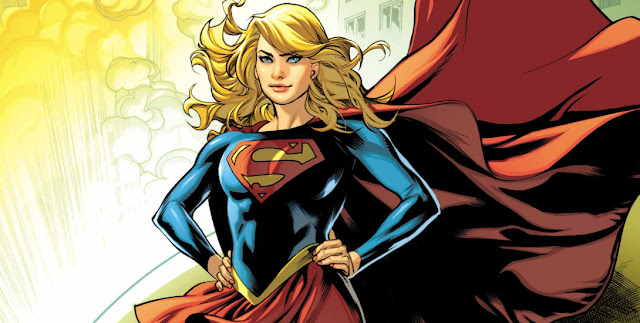 Writer: Marc Andreyko
Artists: Eduardo Pansica, and Julio Ferreira
Color Artist: FCO Plascencia
Letterer: Tom Napolitano
Review by Adam Ray
Summary
"Collateral Damages." Last month Supergirl aligned herself with the Omega-Men. With their help, the many prisoners kept under Harry Hokum’s control are closer to finding their freedom. At the same time, readers become acquainted with the individuals that grabbed Z’ndr and Krypto – we see who they are, and their strong ties to his personal past.

Positives
It’s easy for some titles to feel the need to bog down the plot with clarifying elements. Supergirl thus far has not been guilty of this. It has moments for Supergirl to remind readers that her powers are drained because she starts the issue toting an energy blaster. Good storytelling, without needing tons of boring exposition, or art obstructing caption boxes The nitty-gritty of the plot is up to a reader to remember. Her involvement with the Omega-Men; even down to Krypto’s sickness,is up front in the plot, but there for readers to recall.

Negatives
The issue felt very frenetic. It spends very little time not in a place of high action. Not to say that there’s anything wrong with this model of telling a comic book story, it is however, very easy to feel dragged out. We hold on for over ten pages with Supergirl in battle with little emotional investment. This is to say if we didn’t remember the events of the previous issue. Anyone coming into the title cold could feel very confused.

Verdict
This issue provides the fun, intensity, and the space age action that we’ve come to expect from this title. The driving force as to why Supergirl is in deep space is still true, but her direction, and involvement with the Omega-Men, has her fighting from a new angle. This will set up future issues and future storylines in a very interesting way.