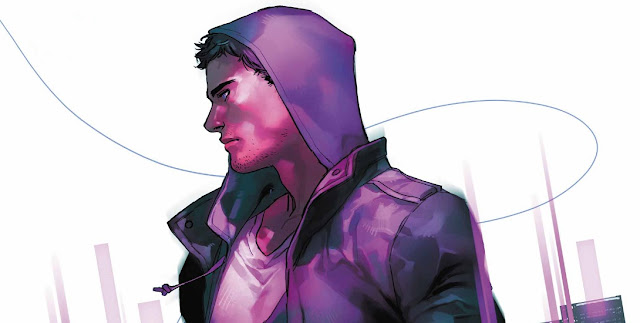 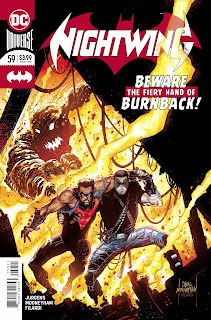 Review by Steve J. Ray
Ric Grayson has begun to embrace the fact that he’s a hero, and for the right reasons. This isn’t a man who is driven to do good, he feels the call to help people, not because he has to, but because he wants to… and because he loves every second. While his memories may have gone, the man that was Nightwing lives on in Ric.

I’ve been loving this series forever. The changes wrought after the cataclysmic events in Batman #55 didn’t drive me away from Nightwing, they pulled me further in. The adventures of this new Ric Grayson have entertained and enthralled me since they started in issue #50. I’ve made it no secret that I felt that writer Benjamin Percy’s run was cut short too soon, am impressed by what Scott Lobdell brought to the table with his plots, and enjoyed the scripts of both Fabian Nicieza and Zack Kaplan.
As soon as I started reading this issue something felt a little different. The fact that Nightwing’s inner monologue, narrating the story, sounded more confident, the dialogue between Ric and Nightwing Red, Malcolm Hutch felt a lot more conversational, the pacing and structure of the training montage… something had changed from previous issues. When I finished the book and went back to the beginning to start the review I realised why.
We have a new writer… and he’s a legend. 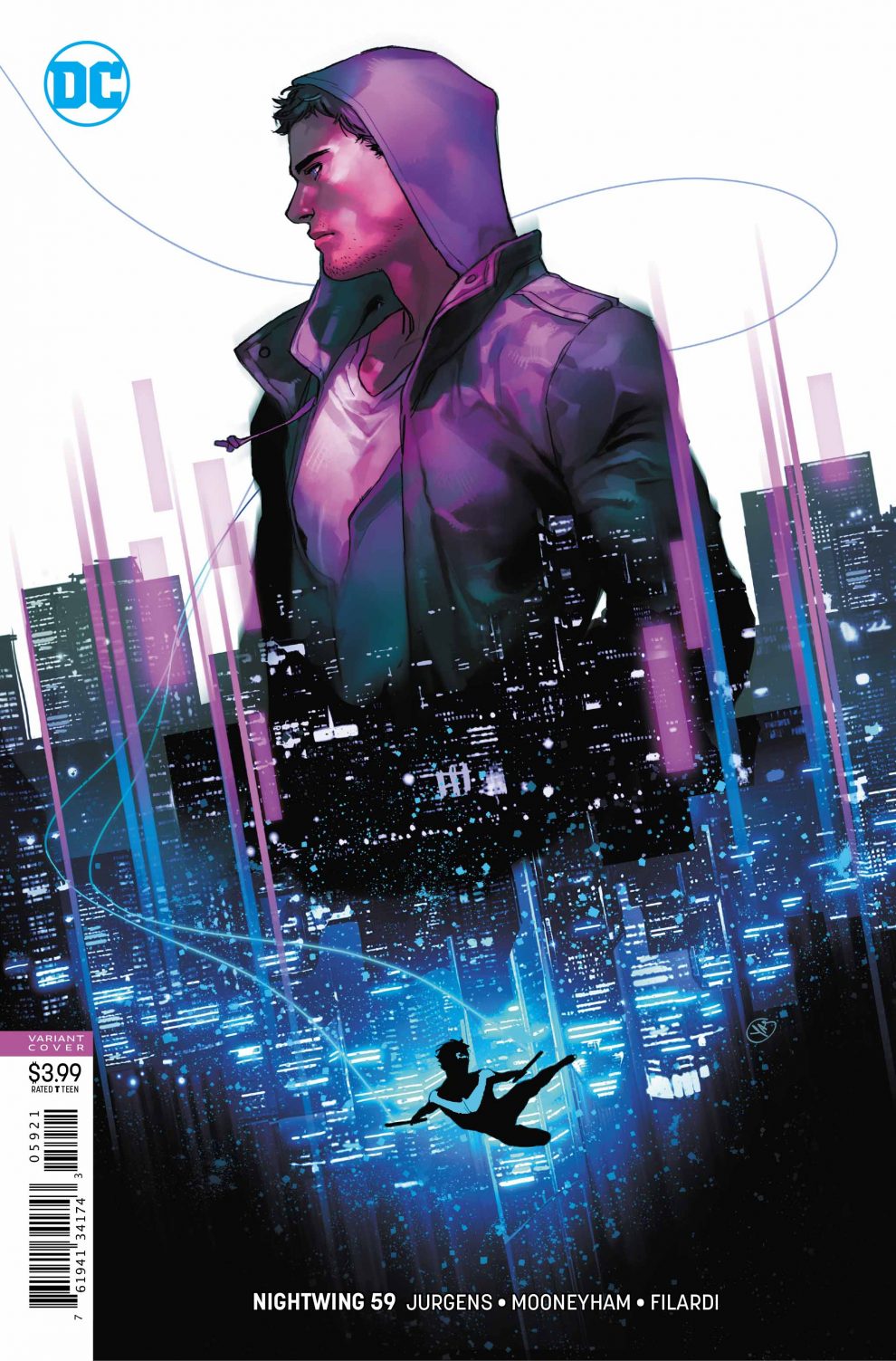 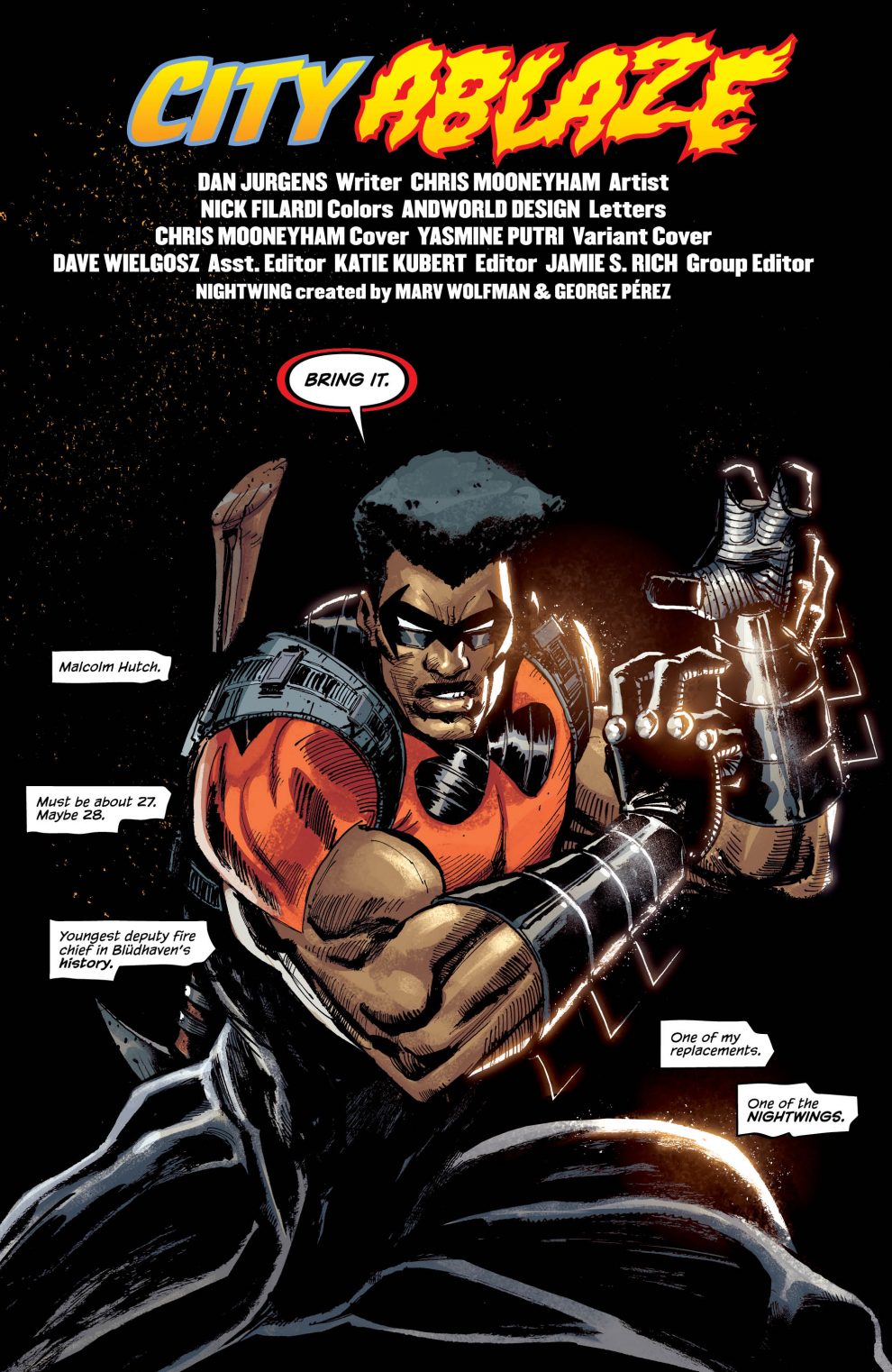 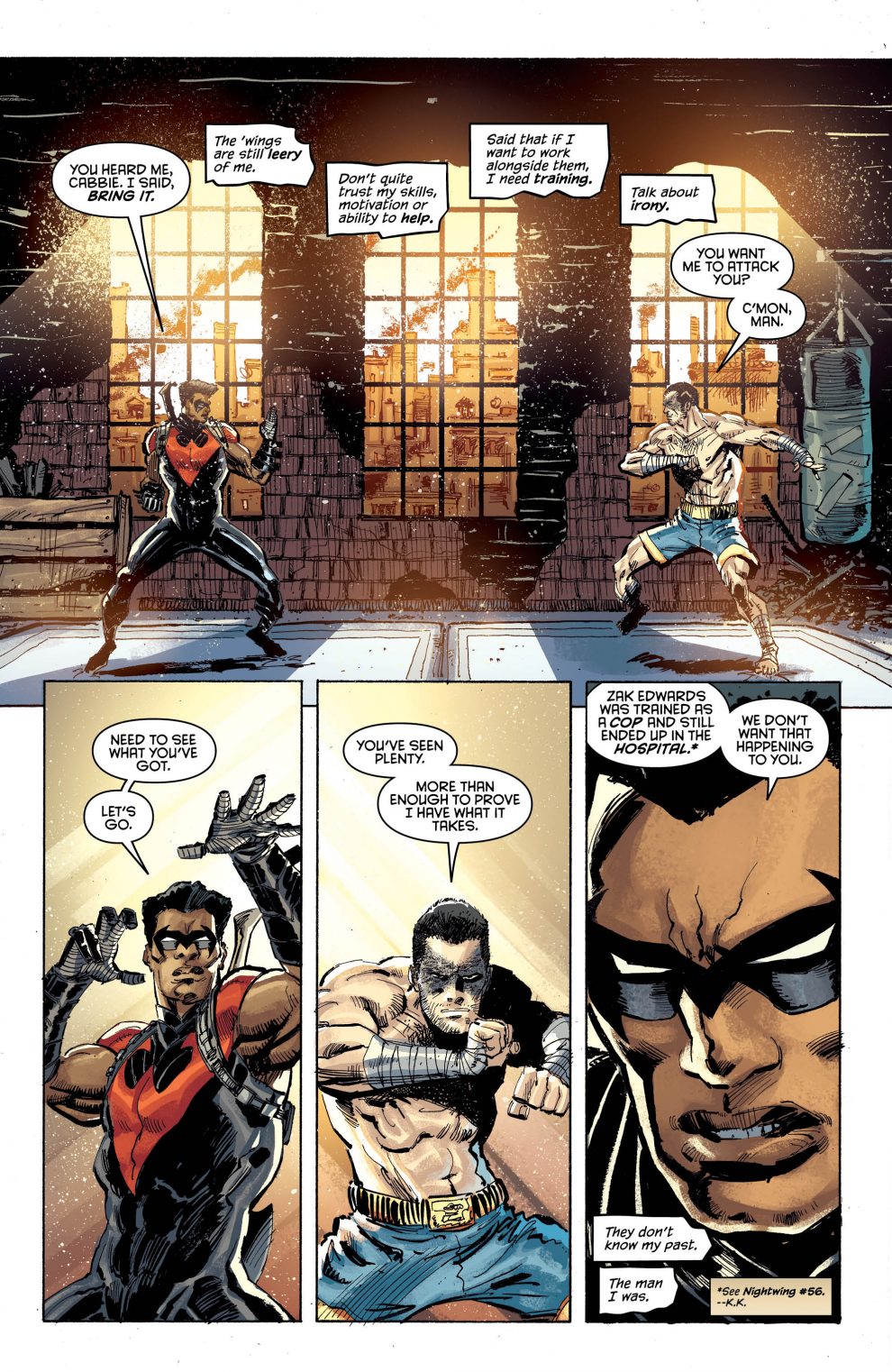 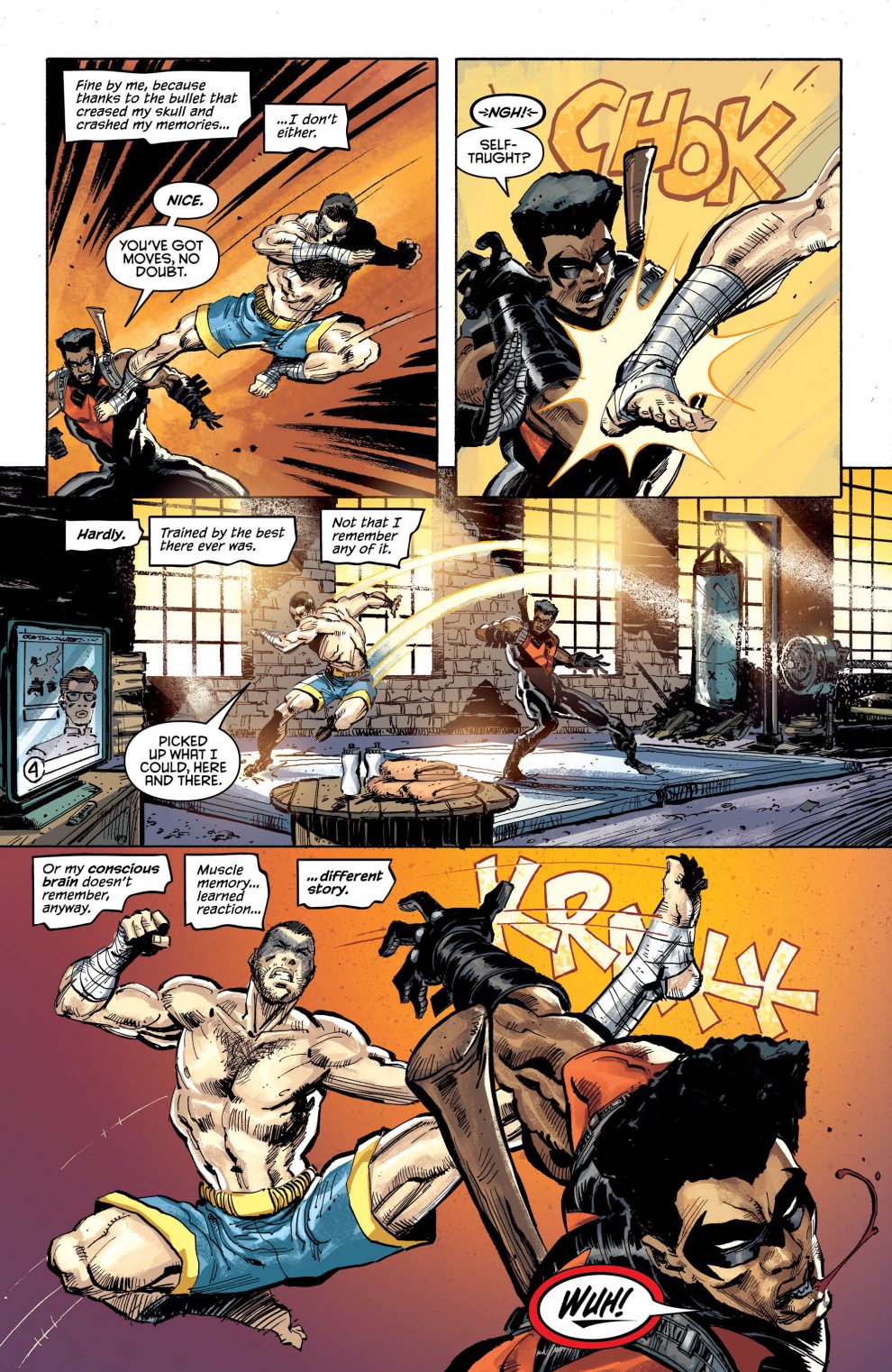 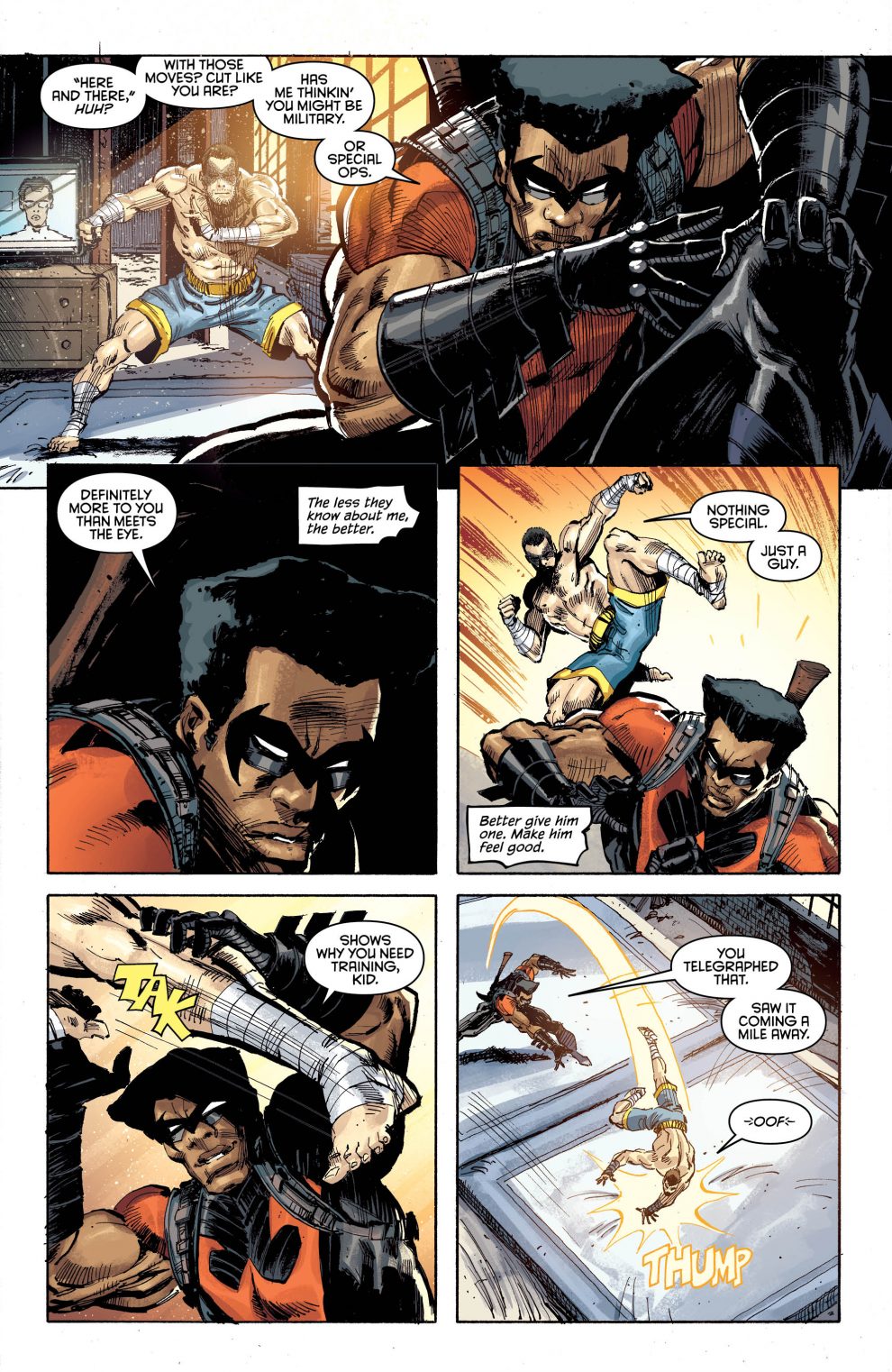 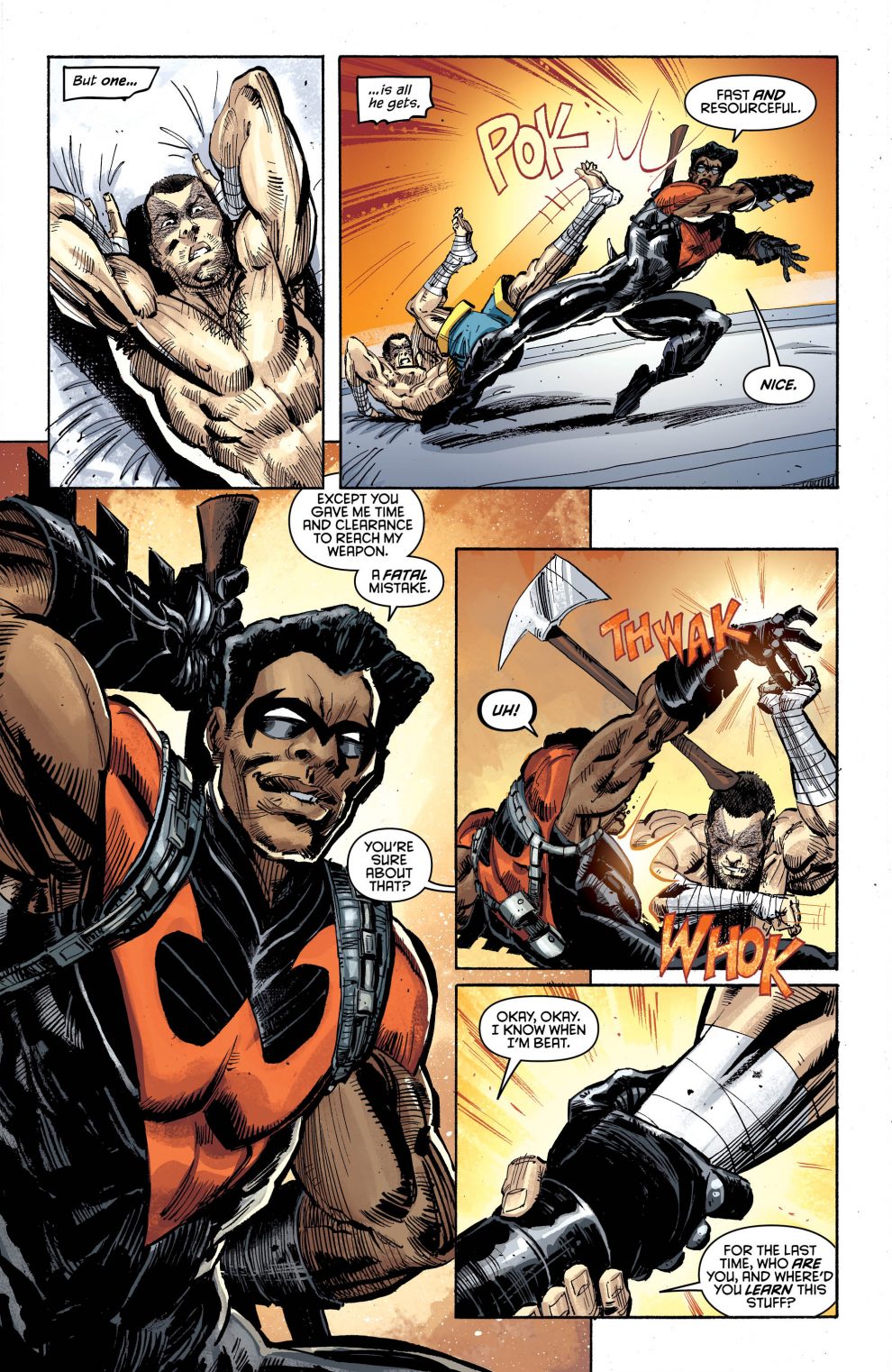 That’s right, Dan Jurgens is writing Nightwing! The man who gave us some of the greatest Action Comics stories of the Rebirth era, and some of the most legendary Superman tales EVER, is now handling the adventures of a certain Mr. Grayson. Dan Jurgens is no stranger to the world of Batman either, as he’s written some fine adventures for everyone’s favorite Dark Knight too, most notably in the pages of the excellent Batman Beyond… for the last FOUR YEARS!
Jurgens’ most recent Beyond story, the brilliant “The Final Joke”, featured an older Dick Grayson, presented as Mayor of Bludhaven and as a father. Please go back and re-read that last sentence. Yes, I said DICK Grayson, I said mayor and I said father. This story is also noteworthy because the gunshot wound, Ric’s amnesia and the past ten issues of this series (well, nine and the annual) are mentioned.
I am BEYOND excited as to what Dan Jurgens is going to bring to this series.

One issue in and the new writer is making his presence felt. Chris Mooneyham’s art is always a joy to look at, particularly when coupled with the color art of Nightwing mainstay Nick Filardi. These two talents have kept the look and feel of this series consistent even with the revolving door of writers, and must be commended. Check out the kick-ass action in the five pages attached!
Dan Jurgens is the fifth writer on this book in just ten issues (well… eleven if you include the aforementioned annual). I was always invested in this title, now I’m more excited than ever!