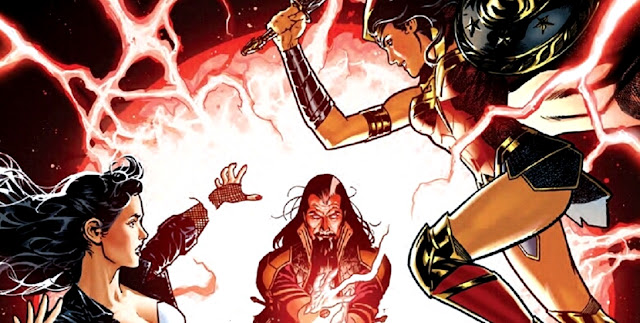 “The Lords Of Order” – Chapter Four 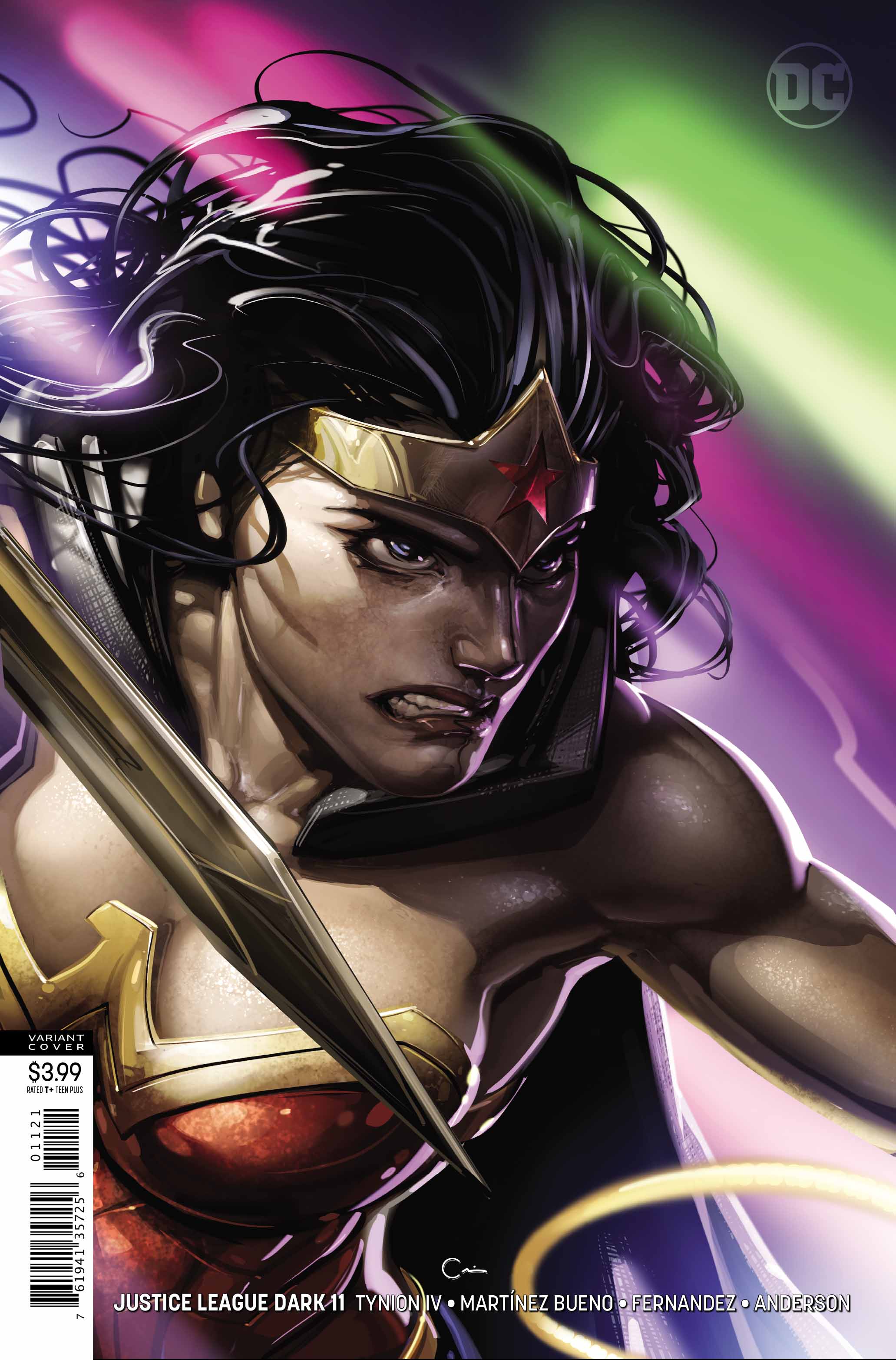 Justice League Dark #11 delivers magic, mayhem, murder… and Mordru. Watch, as Blue Devil gets stoned and Zatanna’s left speechless. To say that that this issue is brim(stone) full of thaumaturgical themes would be a gross understatement.
The cover art shows that at least one of the quests the JL Dark team has embarked upon has borne fruit. Yes, Diana and Zatanna finally catch up with Mordru, but the Lord Of Chaos really lives up to his title. In years gone by magic was often used as a Deus Ex Machina in many comics stories, but in the hands of James Tynion IV and his fellow creators, it has become so much more. Rules, spells, books and incantations have kept magic users from abusing the almost unlimited powers granted by mastering sorcery. The Lords Of Order are using this to their benefit, and magic is dying because of it.
I already hinted in my review for issue #10 what one possible solution may be; but the conversation between Mordru, Wonder Woman and Zatanna (plus that jaw-dropping final page) paint a far more detailed picture. 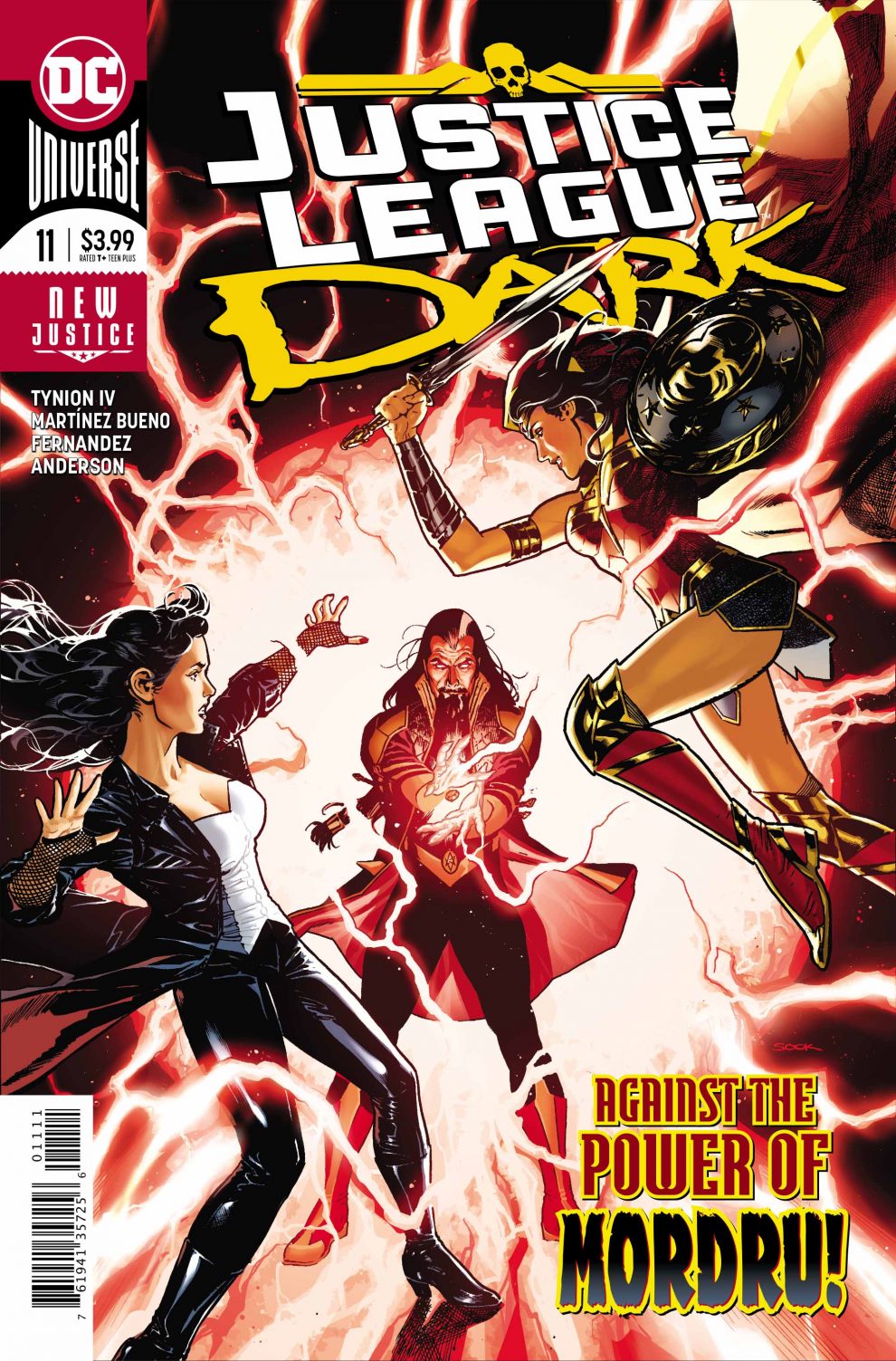 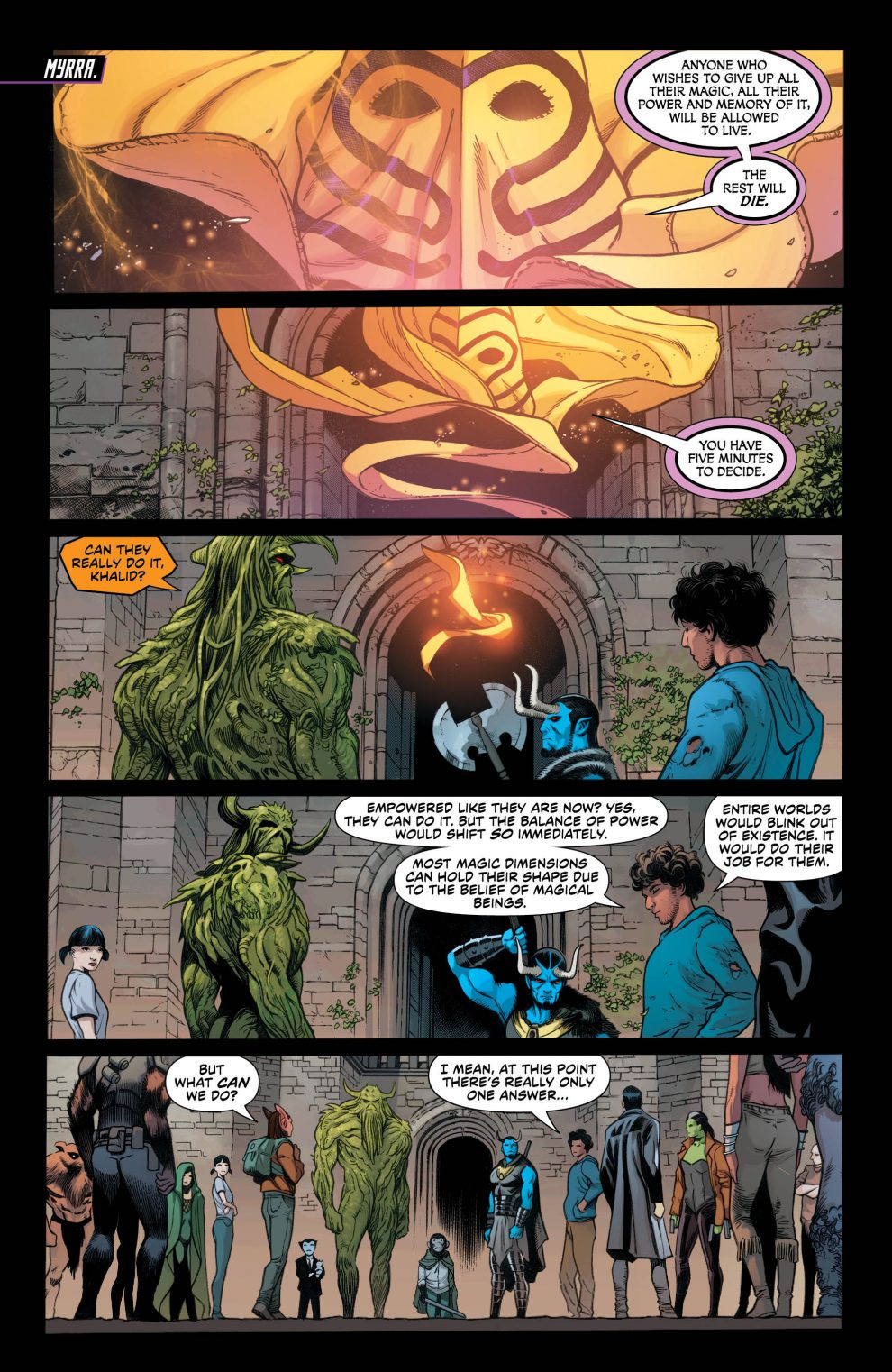 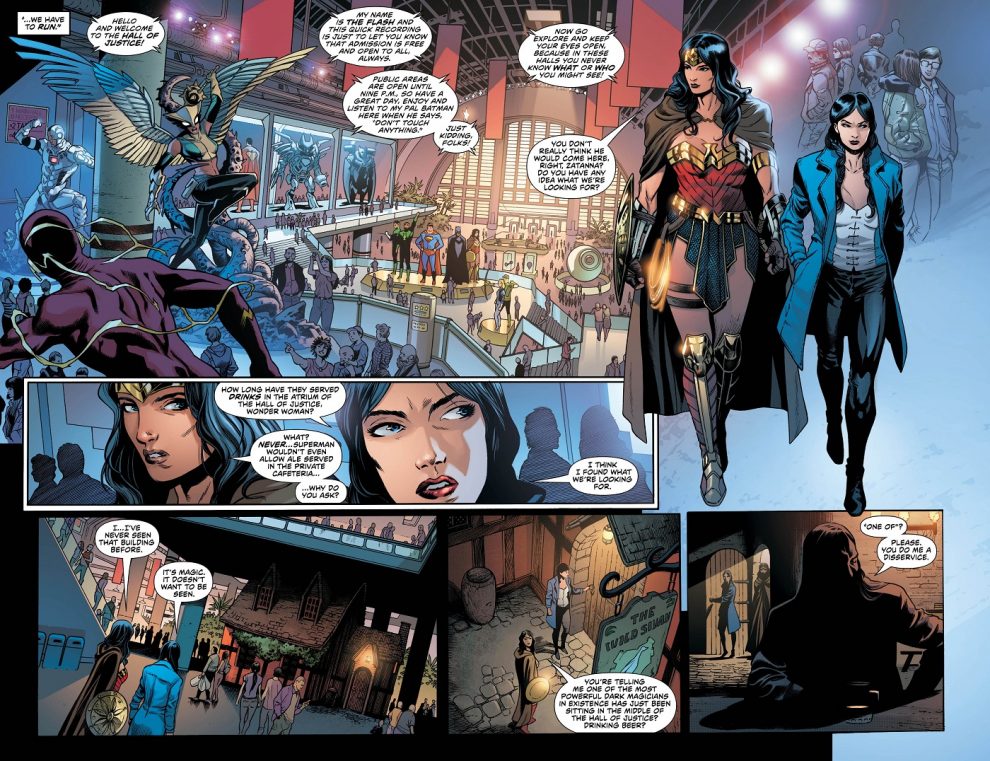 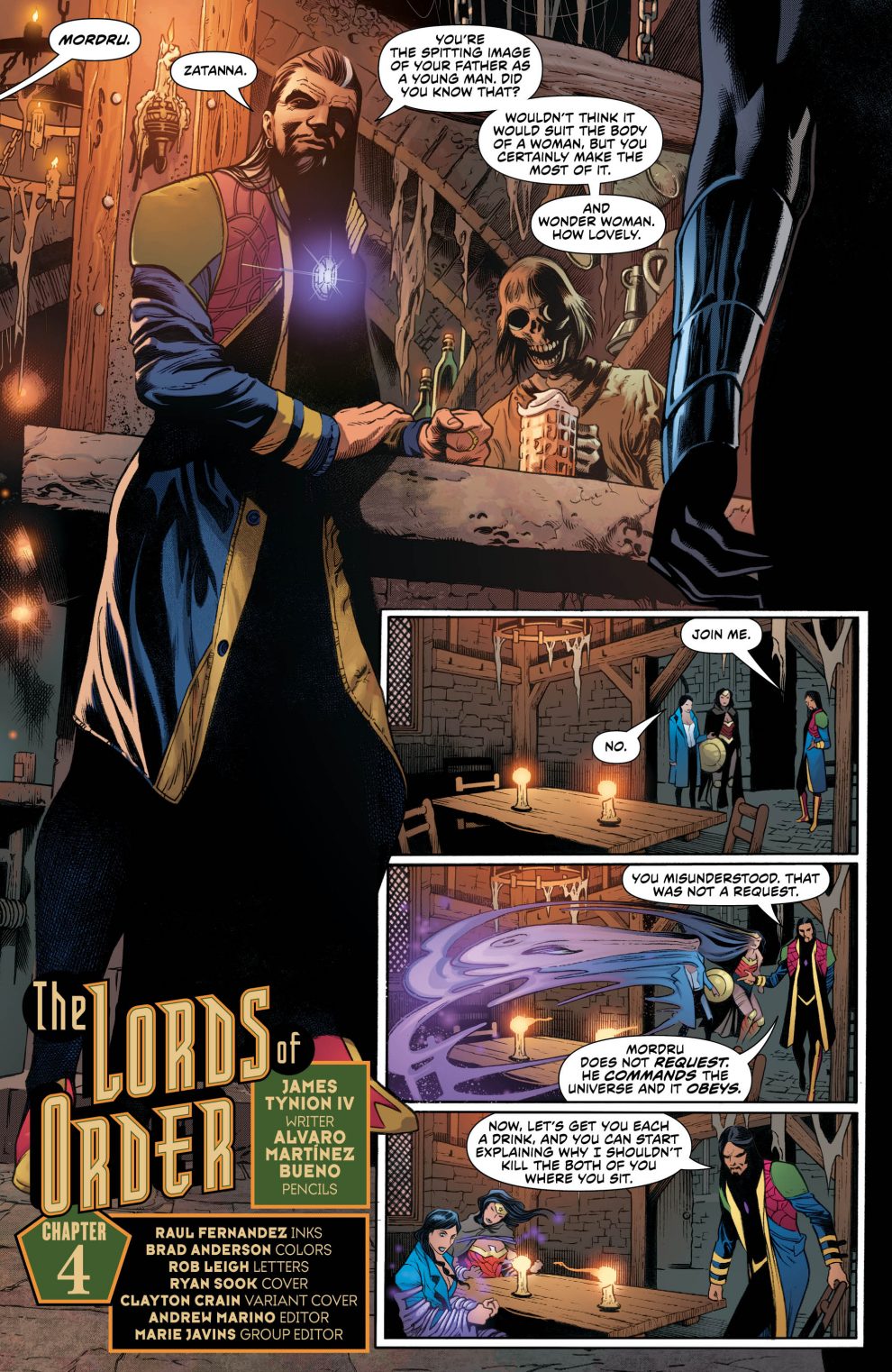 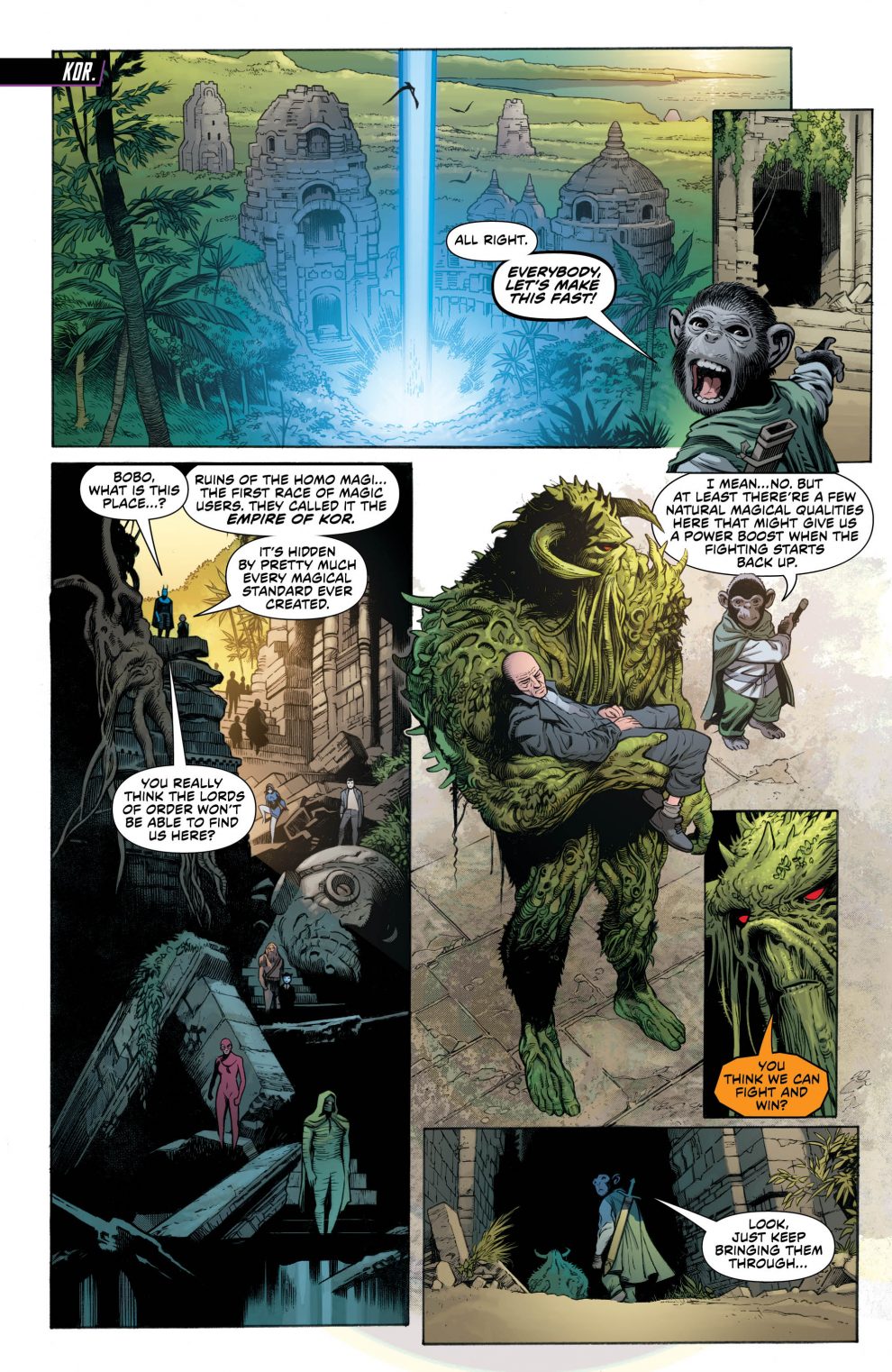 Speaking of detailed pictures; please indulge me while I take a few moments to squee in delight, at the incredible illustrations provided by the masters of mystic art known as Álvaro Martínez Bueno, Raül Fernandez and Brad Anderson. In my honest and humble opinion, these dudes need their own wing in the Hall Of Justice. The work these three talented gentlemen produce together has been blowing my mind for close to three years. These artists compliment and bring out the best in each other’s work. Every. Single. Issue.
There’s a lot to be said about having comics where we see the singular vision of one artist, who pencils, inks and colors his own work. There’s also the opposite, but just as valid view, that some of the best comics come as a result of writers and artists working together as a team. No series exemplifies this more than Justice League Dark. The results we get from Álvaro, Raül, Brad – and spellcaster superior, letterer Mr. Rob Leigh – border on the alchemical. Page four (provided) pages 10 and 11 (BUY THIS COMIC) are just two examples.

Most magical villains frequently left me cold in the past. I always found them laughable, at best, and annoying at worst. Justice League Dark #11 turns that opinion on its head. Mordru is scary! The way he uses magic is cold, arrogant and nasty. His power is downright terrifying.

I have killed millions by my own hand. I have been a plague upon this world for thousands of years, partaking of every cruelty the human mind has ever conjured.
And in a thousand years, I will still be here standing, when the rest of you are dust.