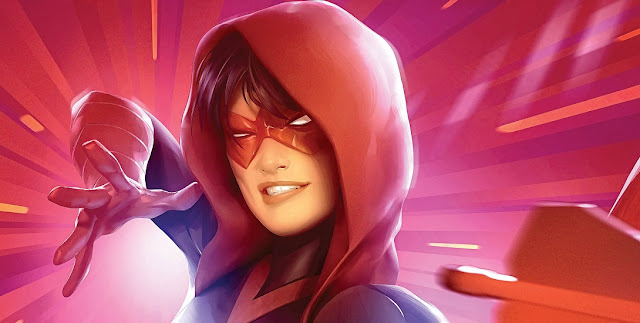 “The Terminus Agenda” – Epilogue. Teen Titans #30 deals with the catastrophic consequences of the entire “Terminus Agenda” storyline. This story’s been running in this series and through Deathstroke for the last three months. After capturing Slade Wilson, and imprisoning him in the prison complex hidden beneath their headquarters, the Teen Titans are in disarray. The master assassin broke himself and all the other inmates free, and now Roundhouse, Djinn and Crush want answers. Why did Robin, Red Arrow and Kid-Flash keep this secret from them? How can the team move forward?

This issue was pretty darned brilliant. While I found the crossover a little pointless, and wish it had just run through this series, the aftermath has proven to be outstanding. This is the outcome that I’ve been waiting for, dreading and fully expecting since Adam Glass took over as writer. His understanding of Robin, Red Arrow and the entire cast of characters is deep. I totally get Damian’s reasoning and Emiko’s loyalty to him. I cannot, however, condone what his actions.
The team’s indignation and sense of having been betrayed is valid. The cutting words shared between Kid-Flash and Roundhouse were particularly poignant. Djinn broke my heart. These are teenagers as real as those in any high school around the world. Their emotions are raw and their hearts are on their sleeves. While a lot of this issue revolves around conversation, when the action hits, it hits hard.

Bernard Chang, Marcelo Maiolo and Hi-Fi shone in this issue. The layout, pacing and storytelling is stunning. They don’t just fill endless panels with identical, copy/pasted heads spouting platitudes… oh no! The scenes have multiple camera angles; like a drone’s swirling around the team. We get body language, close-ups and raw emotion. I love the way that we get really innovative layouts throughout the issue, including full shots of each character down the sides of multiple pages. I would love to see Adam Glass’ script for this issue, so I can gauge how much Bernard contributed to the final look of the book.
I don’t know which sections were colored by Marcelo and which were handled by Hi-Fi, but the results are beautiful regardless. Shadows, light, Djinn’s intrinsic glow. All of it is lovely to look at.
Rob Leigh worked hard, this month, as there is a lot of talking in the issue. Every word is important, required and deep. Rob makes the book easy to read and enjoyable. His sound effects crash and blast off the pages.

I read Deathstroke every month too, but I feel sorry for those that may have been pushed to pick up his series to get the whole story. His apparent death at the end of chapter four, and the obligatory tease prompting readers to pick up the next issue, felt a little cheap. I know that comics are a business and these titles need sales, but I wasn’t completely enamoured by this crossover to start with, and the sales pitch pulled me out of the moment, slightly tarnishing an otherwise perfect issue.

Teen Titans #30 bordered on perfection. The writing and visuals were all first rate, the pacing was fantastic, and the emotions, dram and tension led to some kick-ass action. If the story and art alone weren’t enough to get heartbeats racing then the sudden appearance by a classic DC character (who had to appear in this book eventually) on the final page definitely set the tone and whetted the appetite for the next issue.